IT'S CLOBBERING TIME! Here is the unofficial Marvel toy board. C'mon in and talk ML, MU, Select, and all of the other Marvel toy lines.
Post Reply
1014 posts

I also got my shipping notification from DorkSide. I was expecting the AOA wave shortly, but not this.
Top

Does the Endgame Quantum Suit Nebula head work on the What If Body? Not super interested in this wave, but curious how that kitbash looks.
Top 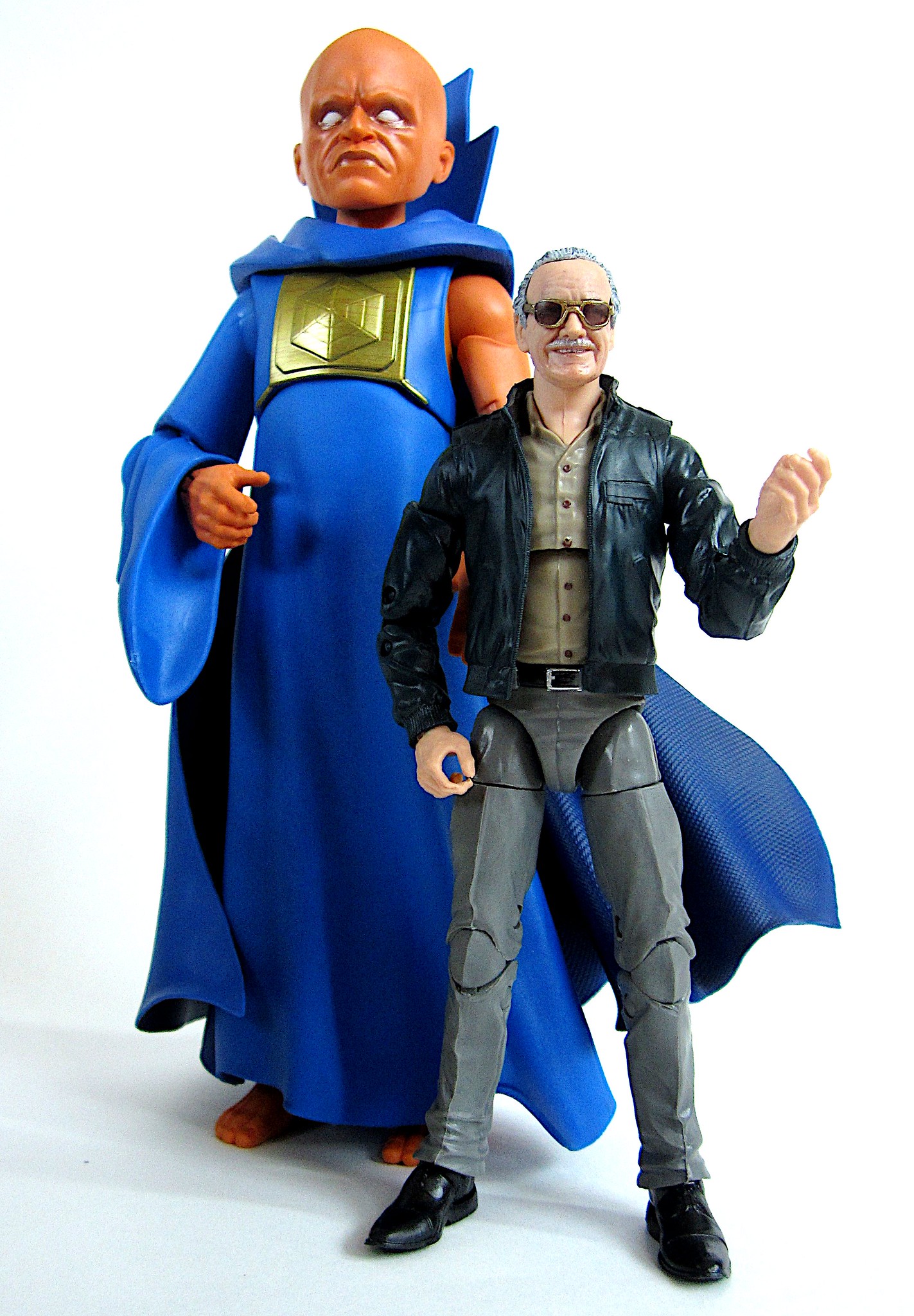 What&#x27;s the matter? You kids haven&#x27;t seen a couple of Watchers before? by Wes, on Flickr
Top

EnigmaticClarity wrote:I also wasn't sure about the name "Doctor Strange Supreme" on that figure. Was the word "Supreme" used somewhere in the show other than referring to Strange as the Sorcerer Supreme, which he's been in the MCU since the first film? Some alternate name indicating his thirst for power and redemption or perhaps his turn to evil seems more appropriate.

I think it just implies he's "supreme" not sorcerer supreme, for being a magical absorbing vampire essentially.

He's not truly Supreme until you add the bacon bits and sour cream.

You’re right - it’s been a while since DS has commented.
Has anyone done a wellness check on Dorkside?
Top

You’re right - it’s been a while since DS has commented.
Has anyone done a wellness check on Dorkside?

Dorkside is doing something. I ordered a Not Mint set of the retro mandalorian wave this morning and I got a shipping email roughly an hour after I placed the order. So they are alive. As far as the rest of the Legends I have on preorder, no movement on them as of yet. And I am quite excite about this What If... wave!!

Sent from my SM-G781V using Tapatalk

Just received and opened the What If wave from Dorkside (thanks as always), and to me, it’s a mixed bag.

I think it has to do with my weaker interest in the actual source material. The show has been fun, but it mostly feels inconsequential. So the figures I happen to like, are based on episodes I preferred also. The figures I don’t care for are also from episodes I didn’t care for.

Dr Strange is my least fav. Pretty sure the body is just reused from previous releases of the MCU figure, but he has maybe a new torso, def a new barbell neck. I don’t love the wacky colors. Head sculpt is great tho.

Nebula and “Cha-Cha” are decent. Again, I think Nebula is a lot of reuse of the MCU figure, with a new torso/barbell neck. The blonde coif is well represented. T’Challa is an all new sculpt, but he’s pretty lithe. Not as crazy as ItSV Peter B or Miles. He actually seems like he would fit well with those figures though.

Spidey is another reused body. The animated head is meh. Doesn’t looks a lot like the source, nor Holland Peter. I like the webshooters, but they are fixed and won’t rotate with his Thwipp hands. Fists it is. But he looks like he has Popeye forearms.

Zombie Cap is excellent. Just a really fun sculpt. Gory, but not overboard. Thr open wounds are so cool. Articulation is great, with barbell torso and neck.

Carter is my fav. She’s just stunning. Excellent proportions and portrait. Can’t wait to get the Stomper for her to pair with.

Watcher is like a Muppet. His skin is SO orange. It was a little tricky to assemble. Specifically, getting the upper torso onto the peg of the lower torso, as the dress gets in the way. He’s plenty tall, but thin, so there isn’t much to him.

I like Sylvie a lot. The likeness is quite good. The outfit lacks texture though. She feels like the most necessary purchase from the wave for me since she’s MCU canon. She looks great with Loki, and I can’t wait for Mobius to join them.

All in all, not a bad wave, just feels non-essential. I wound up canceling 5 figures from the wave at Pulse. Don’t mind getting extras of Carter and Sylvie.
Top

Wow, fast shipping to you, Norm! Hope I get my wave soon! No shipping notice for me yet.

I like the looks of the wave overall, but I might have switched a few characters around some, in hindsight. Because there are some characters I would love to get in figure form that aren’t in the wave. Like:

And I am betting that there will be more that I want coming in future episodes! Based on posters and the title screen:

Spoiler! :
Ultron-Vision from the title screen
Gamora in Thanos armor

Got my wave today too, thanks to Dorkside!

Zombie Cap is a real highlight! His sculpt and paint are insanely well done!

Strange is kinda boring. Minimal new parts. He's good for what he is, but I didn't care for that episode much, either.

Spidey is even more boring to me, and that was my favorite episode! It's significant as the first pinless Spider-Man arms, but not much else. I can think of several characters I'd have rather gotten instead from the zombie episode.

Nebula looks great for mostly reuse. The colors are bright and really pop in the best ways possible.

Space-Panther is cool, but doesn't do much for me. He has a great sculpt and paints, though!

Captain Carter is one of my favorites! Beautiful sculpt, great paints and color tones. My only complaint is the neck; it's inserted as a separate post into to the torso and mine easily popped out from just bending the head forward a little, so I'm gonna have to really glue that in. I do need a Hydra Stomper thanks to her, though; I can't wait to have her climbing his ladder rungs! What a cool little feature that is!

Watcher... kinda sucks. He's not fun to put together, and I cannot get mine to stand in any pose, even the most vanilla, static poses. I gave up on him. He's really not worth getting, I'm sorry to say, unless you balance him up in the back of the collection against a wall or someone(s). He kind of reminds me of the ToyBiz Onslaught figure in terms of how bad it is trying to get him to just stand.

Sylvie is great! She's my other favorite. I love her sculpt. The likeness is excellent, even if she looks a little bored; she needed a smile or something. The cape is useless in anything other than static poses, but that's cool. She barely used it and I'd rather get it than not. I really can't wait to see how the legs get reused (something like Ultimate Black Widow would be perfect!). Her articulation is stellar, too; I love that they actually gave her boot swivels. All in all, a great, fun figure to have.
Top

I ordered also from Dorkside on day 1 but no shipping notice yet. In fact, my ETA is still February 2022.

Oh man, I pre-ordered with Pulse on this one but if DS has it in stock early and isn't completely wiped out, I'd much rather give them my business. I'm dyin' for this wave in particular.
Top

When I read this, I immediately thought, “Did I somehow miss an Umbrella Academy cameo/Easter egg in a What if episode?”
Off topic: A suited 1:12 Mary J Blige figure would be pretty great. On its own, and as custom fodder.
Top

Think I may just get Sylvie and Capt. Carter then. I’ve grown on some of the designs, but I kind of expect a Watcher rerelease at some point.
Top

Maybe a movie style one. I wonder if they may repurpose the body with a movie style head eventually, like the GOTG2 ones.
Top
Post Reply
1014 posts