IT'S CLOBBERING TIME! Here is the unofficial Marvel toy board. C'mon in and talk ML, MU, Select, and all of the other Marvel toy lines.
Post Reply
718 posts

I wonder when we’ll see the next wave revealed now that everything other than the Sentinel is out or hitting.

With so many heavy hitters yet to be made, guessing an upcoming wave’s roster seems impossible. So here’s my completely random picks for wave 7. A spread of characters. One female. But two villains.

Ash Talon wrote: ↑
Fri May 27, 2022 11:37 pm
I wonder when we’ll see the next wave revealed now that everything other than the Sentinel is out or hitting.

With so many heavy hitters yet to be made, guessing an upcoming wave’s roster seems impossible. So here’s my completely random picks for wave 7. A spread of characters. One female. But two villains.

Angel would be amazing in this line! I liked your other ideas for Doom and Ultron as well. I'd also want Red Skull and Apocalypse as well as any Spidey villains I can get. Literally any character from the Secret Wars comic would be great too.

I'm going to randomly guess 5 for the hell of it:

I can see Baron Zemo coming out before Red Skull. Also, I wouldn’t be surprised if Taskmaster shows up.

If/when Klaw happens, I hope he’s translucent, except for his sound weapon. Could be a cool look.
Top

Just got Widow in and I love it! One of the great things about starting this line is that there are still so many A list characters to come. It's awesome to add our second iconic female Avenger to the shelf.

I gotta say the the flesh tone hands are throwing me off. I'm tempted to paint them black. Does this bother anyone else? Did she not wear gloves in the comics back in the day? If I can justify it I'll keep it as is. Otherwise I'm breaking out the sharpie lol
Top

There are times Widow did not have black gloves in the comics.
I was tempted to do the same until I did my research to justify it. Weird though because more times then not she is depicted with black gloves.
Top

I really don’t get the ungloved hands either. The whole lower arm confuses me. They put a budget into a new sculpt that has permanent bracelets that only Widow would use. They cast in flesh tone, which needs two paint applications. They could have sculpted separate bracelets to place over fully black lower arms. It’s a strange choice.

I opened the rest of the wave today. Goblin looks nice but once I have him on the glider, I haven’t figured out how to balance him. Widow is fine, besides the weird choices and grappling gun. Thor is an absolute winner though, as nearly every Thor figure is. The cape is fully removable and pegs in at the shoulders as well as the back. I love it and he looks great with the other original Avengers or with Loki.
Top

Thor just looks so spectacular. Could be one of the best figures he’s ever had. I love how bright he is color wise.

I hope they do some kind of box set for the convention exclusives this year. These are really scratching my 3 3/4 itch. I always thought it was the articulation I liked the most with the MU line. I think now that it was mostly to do with the breadth of characters. Really looking forward to whatever is coming out in the future. I hope we get to a Captain Britain eventually.
Top

Next assortment will be Ditko costume Spider-Man, Moon Knight, Nova and Firestar.
https://www.youtube.com/watch?v=a8fTUjAk5J0 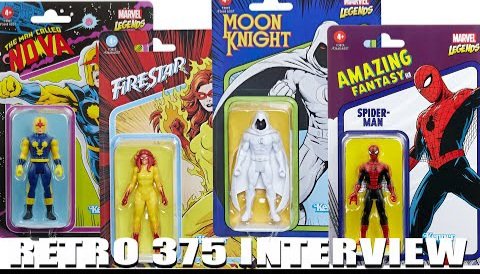 They also confirmed the line will start getting vehicles next year and that they plan to move the character selection a bit beyond the tentpoles of the Avengers, Spider-Man, X-Men and Fantastic Four they've been doing so far.
Top

This wave is a complete skip for me. Though I still haven't found the last wave with the Thing and Thor
Top

Expanding the roster beyond the Avengers/FF/X-Men is fine, except there's still plenty from those corners of the MU to exploit. Except they need to have more than 4 figures per wave. I hope that isn't the new normal.

Moon Knight is the only figure from this wave which was on my want list. That said, I'll gladly pick up Firestar and Nova.
Top

I don't think anyone could have predicted that wave, but I'll likely get them all. Where's the bad guy?
Top

Nice we're expending. Love that we're getting classic Firestar. Could do without variations of Spider-man but understand it. Cool with keeping that 70s to 80s vibe going.
Top
Post Reply
718 posts