Closing out the Age of Apocalypse

IT'S CLOBBERING TIME! Here is the unofficial Marvel toy board. C'mon in and talk ML, MU, Select, and all of the other Marvel toy lines.
Post Reply
843 posts

Wow, that looks really good. I wonder if u could tweak it toi have the long hair out the bottom easily...
Top

Closing out the Age of Apocalypse 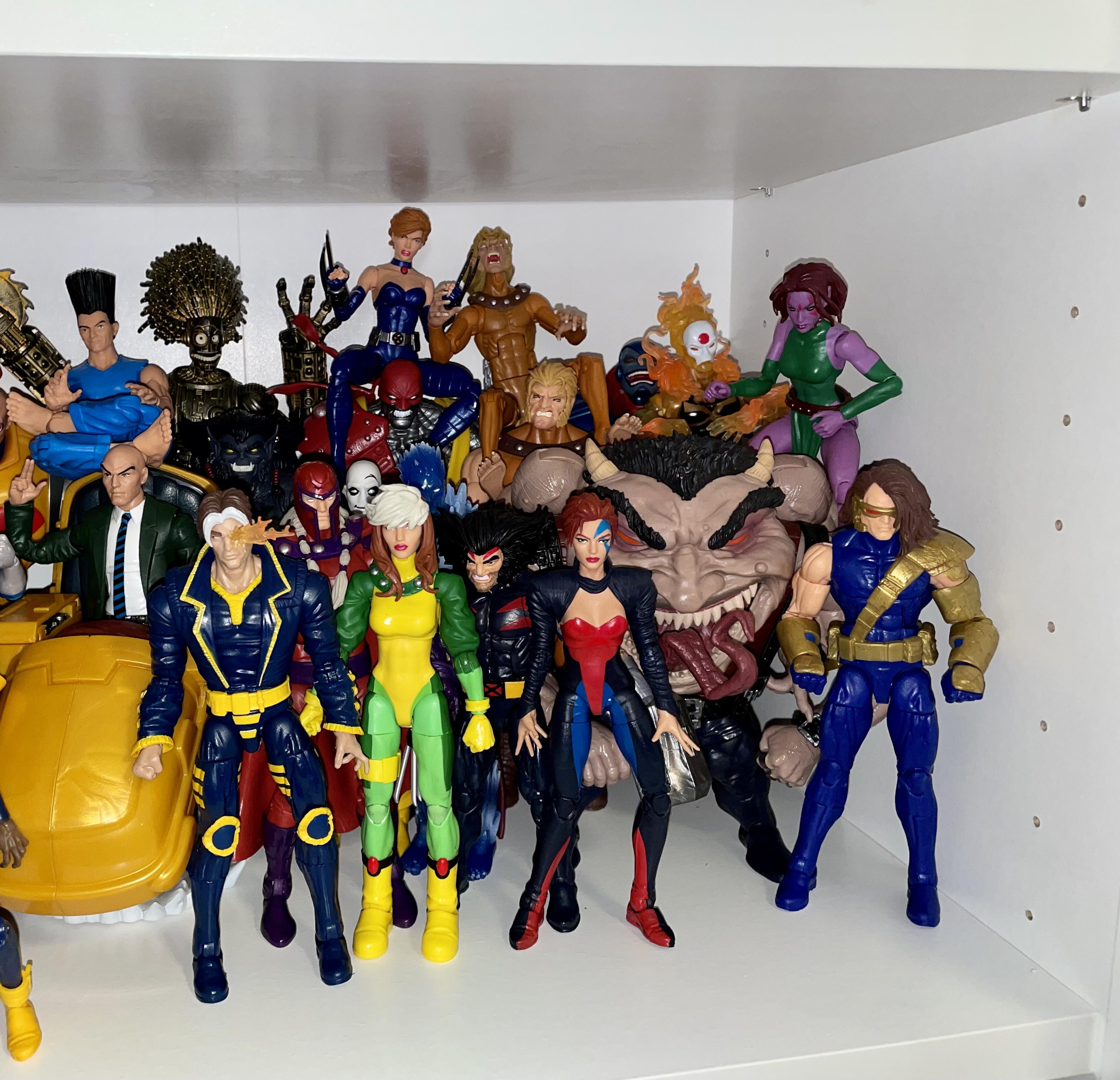 Really love AoA wave two! It was a challenge to work in all the figures in my relatively small display space for them, especially because Sugar Man is so wide and takes up a lot of vertical space.

Colossus is by far my favorite figure in the wave. He’s huge and looks great with Kitty by his side.(Side note: We’re getting three Kitty figures within a few months with this, the Excalibur set, and the Marvel Unlimited membership kit. That’s gotta be a record for her.)

Iceman is my favorite of the single packed figures. He’s easily the best Iceman Hasbro has released. The rest of the wave is solid, though. No duds in my opinion.

Also, really loving how all the ‘90s X-Men look together! We’re so close to getting full teams for the 616 universe after the upcoming X-Force and Excalibur sets (along with the rumored Siryn figure).

Of course, once Hasbro gives us the core members of the early ‘90s X-teams (which to them I think means the ones that are trading card official), there will always be the “kind of” members like Revanche and captive Sabretooth. Oh, and they haven’t even touched Generation X yet.

Guess there is still lots of ‘90s X-Men goodness to go! 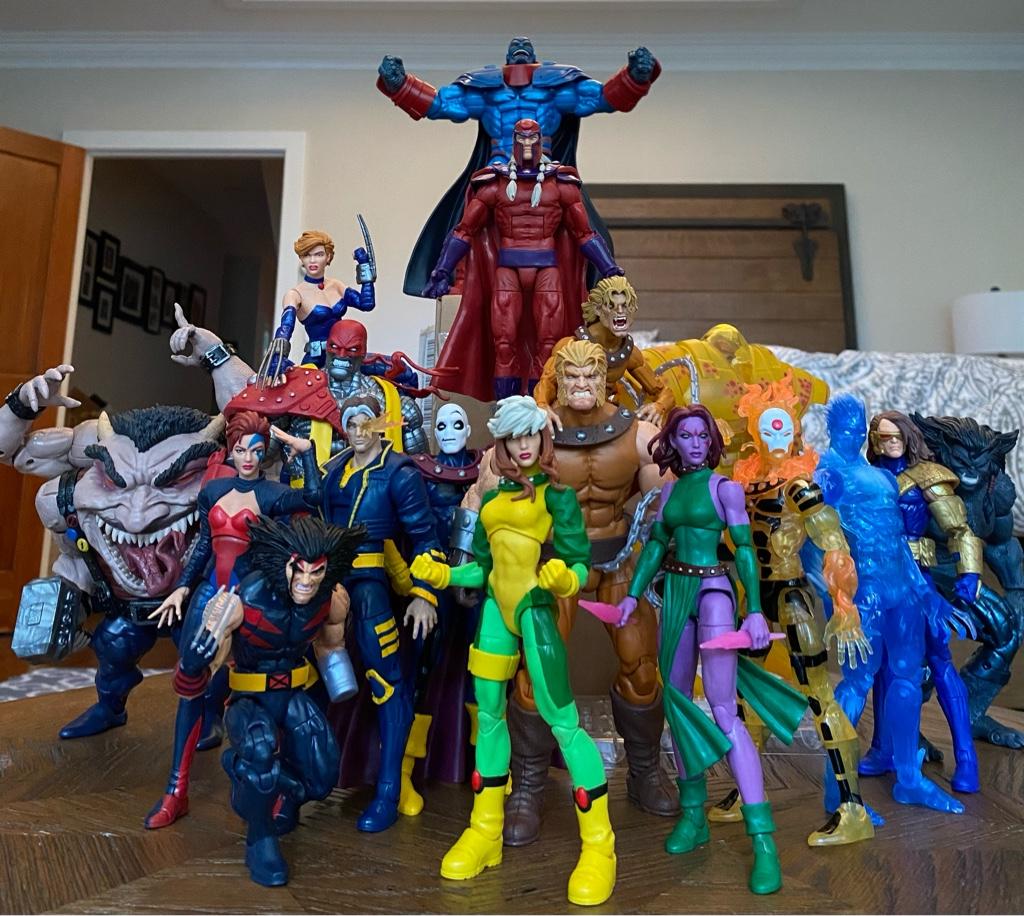 And, once again, I'll point out that Magneto, Rogue, Sabretooth, Wildchild, Morph, and Sunfire all patron the same collar shop.

Clearly, the collar is their version of a uniform! I always liked that touch in their designs, because they are otherwise not cohesive in any other way.

It is a uniform and also shows allegiance to Magneto, as that collar is signature to his costume in AoA as well as 616. In fact, the first Horsemen shown in AoA chronology - Gideon, Candra, War, and Death - all wear a version of Apocalypse's collar, showing their opposing allegiance. You can see a picture here:
http://secondtime.madeoffail.net/funny- ... eflection/

Speaking of horsemen, has anyone customized McF's standard release shirtless Darkseid into AoA Mikhail Rasputin? I think that would work.
Top

Really loving how great they all look together! 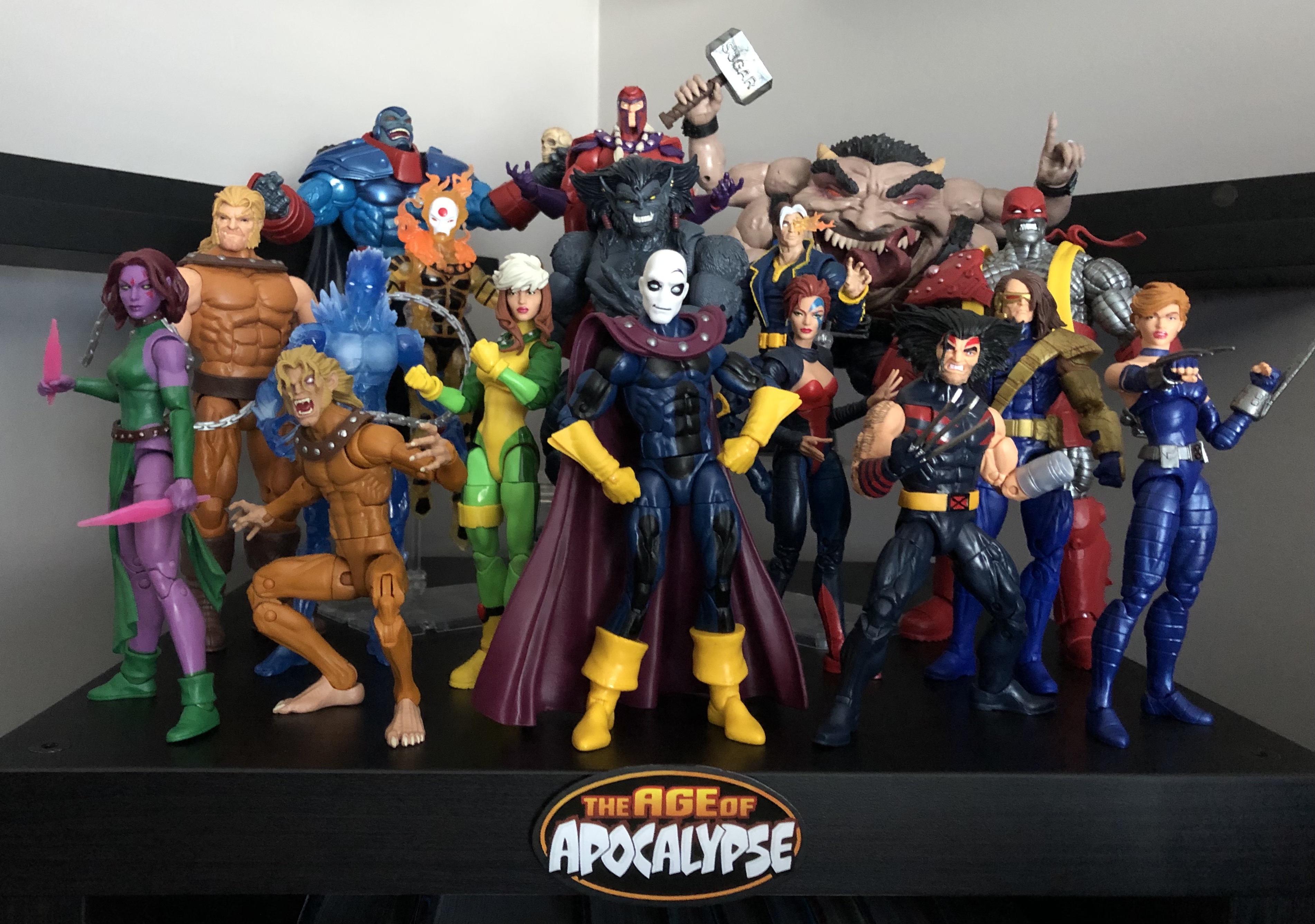 Just give me Nemesis/Holocaust and I am good with calling AOA complete.
Top

Tip of the cap to the OG collectors who have a Holocaust in their AoA displays. Much like the mutants who experienced the AoA - ML collectors who were around at that time still collecting BAFs show their battle scars proudly.
Top

Agree about the scars, most of our Holocaust BAFs have a broken helm piece!

It's still amazing to me that we get Age of Apocalypse figures at all. I look back at what Toy Biz gave us, which was mostly very crappy, but the figures didn't seem out of left field. Weapon X and Sabretooth were just variations of popular characters, and there wasn't a lot of rhyme or reason as to what variations TB was tossing out (House of M, Mangaverse, etc). Variations were par for the course.

There was a lull, then Hasbro took over, and put out Sunfire and Holocaust (a HasbroToy Shop exclusive, and a BAF that was from a wave that was pretty much retailer exclusive and on the verge of being canceled all together). Then ML died.

Then ML came back, and gave us 20-30 waves before revisiting Earth-295. Blink was a shimmer of hope, even though the figure didn't reflect her look in the original maxi-series. Then they put out that first wave of mostly cool but arguably less popular characters from the story. And that spawned wishlists galore, which, had it been a Hasbro of a different era, I would not have given any merit. But I guess the less popular nature of that first wave made it inevitable that a second wave would come, featuring many of the stronger characters we pined for.

And here we are. And in this era of Hasbro, I would not put it past them to release even more of these figures, because if they could give us the current 16-17 figures we have, why not round that out? Crazier things have happened. Back in those Toy Biz days, I couldn't have imagined we'd have this many figures of characters from this story. I am really so grateful that we have gotten this far.
Top

Honestly, I'd be surprised if we don't get 1 more wave. There's definitely more than enough great, big name characters to be made.
Top

Well said Norm! The first wave we got definitely seemed to leave a lot of heavy hitters on the table - most notably Magneto - but never felt like a guarantee. Now that we have wave 2 (plus Dan & Ryan openly discussing AoA wave 3, tongue in cheek or not) it seems there could be even more on the way. Would have seemed like an impossibility not too long ago to go from an x-merch embargo to this!

A new Holocaust BAF (mine came out of the package with that broken latch!) and Nightcrawler are my necessities to round off the collection. But I’ll take whatever else they want to make because they make such a cool display unto themselves!
Top

Nightcrawler, Infinites, Gambit, and Sinister are some of my top wants, as well as Quicksilver's team and Abyss. Would also be great to get some supporting cast from X-Calibre (Mystique, Destiny, Pale Riders, Cain), X-Man (Domino, Forge, Essex, Forge's troupe and Domino's crew), and Gambit (Guido, Rictor). So, basically anyone and everyone.
Top

And I dont think I'd need anyone else. They'd all just be bonus.


Got my free set from DS Friday, got them put up today, very solid wave

I'm already having a hard time thinking of characters I want beyond what we have. When the series came out, the only book(s) I actually read were Alpha, Omega, and Generation NeXt. So my preferences really gravitate to the young team of Chamber, Husk, Vicente, Mondo, Illyana. I don't think those are likely or popular enough.

I could see a redo of Holocaust/Nemesis. I think Havok, Quicksilver, Banshee, Storm, Gambit, and Nightcrawler are also popular enough to warrant figures. Also, I remember Bishop being pretty pivotal to the storyline. Huh, that was easier than I thought.
Top
Post Reply
843 posts