IT'S CLOBBERING TIME! Here is the unofficial Marvel toy board. C'mon in and talk ML, MU, Select, and all of the other Marvel toy lines.
Post Reply
2094 posts

Meteorite would work - Thunderbolts, villain, female and her outfit looks armored. I'd love that, actually. She's the Tbolts character I want next. Atlas could be the BAF. And that would just leave us needing Techno, who could be in the next IM wave.

I’ll echo SR’s sentiment and say that if we get a female villain in another IM wave and she’s not Madam Masque, I’ll shit myself
Top

Madame Masque is a must for me, too. She really needs a redo.

JPC wrote:Meteorite would work - Thunderbolts, villain, female and her outfit looks armored. I'd love that, actually. She's the Tbolts character I want next. Atlas could be the BAF. And that would just leave us needing Techno, who could be in the next IM wave.

I would really love a teen Tony actually. But I will echo the sentiments and say we need an extremis armor, pentagon armor, a heroes reborn redux, heroes return, the original Hulkbuster armor and the Space Armor. A bleeding edge redux would be cool too

Akatsuki wrote:Madame Masque is a must for me, too. She really needs a redo.

Big yes to this! As well as the Madame Hydra (?) that was released with her. The previous MM is heinous. Plus her mask really faded/dulled over time.
Top

While I agree both Madames need a redo on updated bodies, my Madame Masque held up physically. I don't think I saw any fade on mine. But M. Hydra had that ugly head sculpt to begin with. I've been seeing rafaelo post his Madame Hydra on IG, and it uses the existing upper torso and arms on a Polaris lower body with Laura Wolverine's unmasked head, and it's superb. Considering replicating that as a place holder, or at least just to upgrade what I have.
Top

So I finally got some time last night to open this wave. Here's some thoughts:

Darkstar - Considering all she is is a new head on a blank body, I think she's quite nice. The inclusion of grippy hands is odd. Not sure we needed those. I would rather have seen some kind of effect here, which I think she could have used pretty badly. All in all, a pretty standard female figure that I wanted to dislike (simply because she's not Madame Masque), and don't.

Stealth Iron Man - Luckily mine didn't break out of the box. You guys know my stance on this.. I'm really disappointed that this figure didn't get the appropriate new parts. However, unlike with the Silver Centurion (where every inaccurate detail is caused by newly sculpted parts), I at least understand why they went this route with the Stealth Armor. With so much new tooling, it's easy to look at this and say "well that's just the restraints in the budget." That said, they did give him an absolutely beautiful finish. He's at least a beautiful figure to look at.

Guardsman - When the rumors of Guardsman came out, I full expected him to be on the Bucky Cap body, reusing the Beetle/Night Thrasher torso. I was pleasantly surprised to be wrong. The new torso is nice and definitely appreciated.. However, with them sculpting a new torso, it would have been nice if they would have fixed the clearance issues on this body in the shoulder joints. I do think they could have chose a darker shade of green for those sections, as I'm not sure there's enough contrast between the two colors. That said, I do love this figure. Adding Guardsman to the villain shelf is going to be a highlight of 2021 for me.

Ironheart - This figure felt inevitable in the line. I don't have a strong attachment to Riri. I'm hopeful that her D+ series will help me love the character. This figure is definitely a good start though! Her double jointed elbows have incredible range! When I saw she had the barbell neck, I expected that there would be a lot of range for flight poses, but when you work the torso joint as well she looks great. The unmasked Riri head is one of the best they've ever done. This is one of the true highlights of the wave.

Ultron - Finally. Classic. Freaking. Ultron. I don't know that anything else needs to be said, but I'll try a bit here. The sculpt is awesome on this figure.. The silver came out pretty damn strong. The Kirby Crackle effect is just outstanding. I'm glad he got a nice selection of hands, but he and Kang getting 5 total hands is a bit strange to me. I do wish he got a open right hand as well. I can't wait to panel line him today!

Modular Iron Man - Another figure that had a growing feeling of inevitability in the line. With all the 90s love going on, it was only a matter of time, and he definitely doesn't disappointed. The Sculpt is damn good, the articulation is outstanding. I do think that he could stand to be a little bulkier in the upper body, to better represent the 90s art style, but that's not major. As is, I would say the Classic Iron Man and War Machine figures are better representations of those armors than Modular is to the 90s Iron Man, but they're pretty much flawless, so it's be hard to top them anyway. I do wish the shoulders were designed a little differently, as I don't love the gap between the shoulders and torso.. but hey that's toy design sometimes.. For one, I don't think it looks great, and 2 the should armor can run into the torso and it can lift. The articulation on this figure makes up for any sculpt nitpicks I have though. So. Much. Fun.

Build A Bear Ursa Major - I wanted to really hate Ursa Major and Darkstar for taking up character slots in an Iron Man wave. If Ursa was reuse of the Sasquatch mold, this would be another understandable choice to me, as there are 3 brand new sculpts in this wave. However, Ursa being brand new bums me out because that's tooling budget that could have went to one of Iron Man's many armored villains. That said.. this damn Bear is a lot of fun. To quote our beloved Robo.. "Good toys is good toys." The only thing I could complain about on him is the range in the head, it's not that great.

Hologram Iron Man - I know many of you are waiting with bated breath on my thoughts on this figure, so I took a quick video to properly express to you all how I feel.

Also, if you guys have Instagram there's a few quick pictures on my Story that, in hopes of not making this long post any longer, I won't post here, but if you're interested, you can find them HERE.
Top

Add in an additional ponytail head for the Masque clone for our classic Avengers displays. Costume isn't the same, but I'll take what I can get.
Top

I also really want a Madame Masque. She's probably one of the last remaining semi meaningful female villain that we need... aside from Spiral. We need Spiral.
Top

So do vault guardsmen ever carry guns? Or do they typically rely on repulsors? I’ve got some extra plasma rifles from the aim troopers here and I’m wondering if I should arm these guys when they arrive today

Got my figs from Dorkside, thank you!! I’ll let the pix speak for themselves. 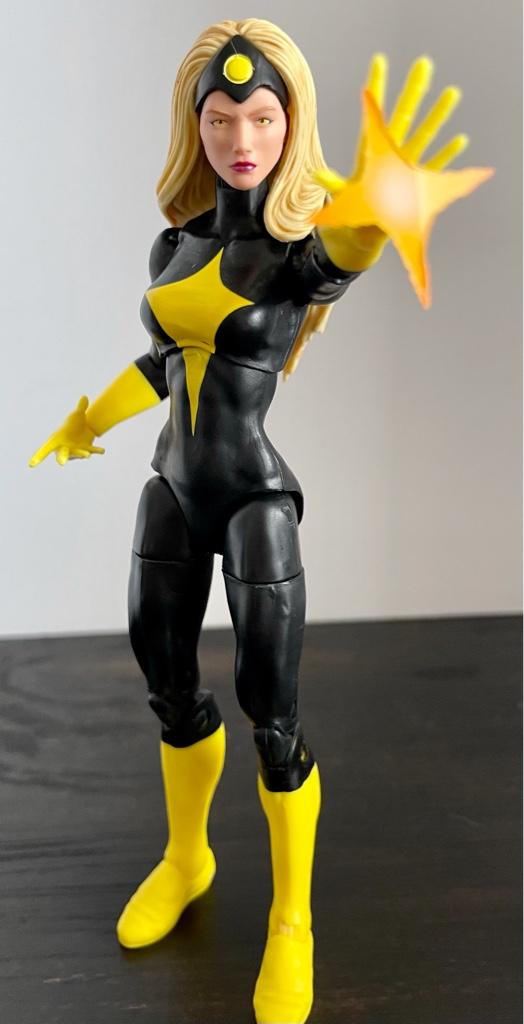 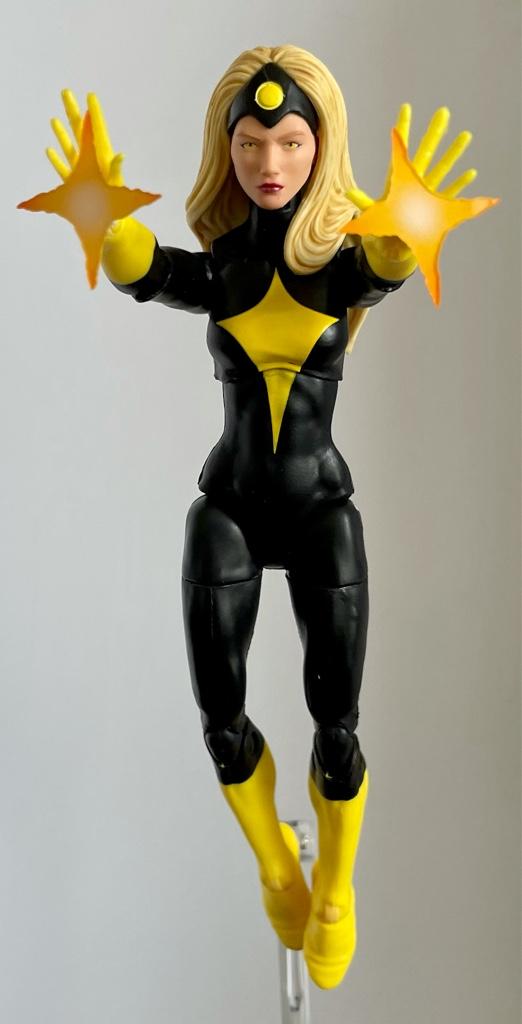 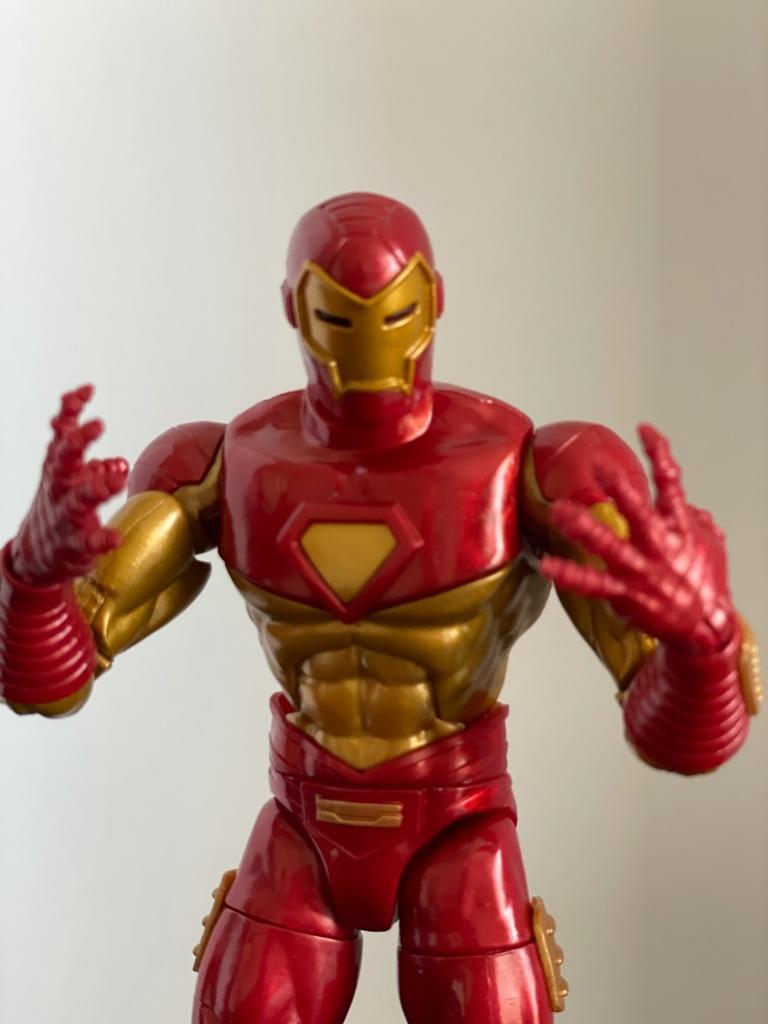 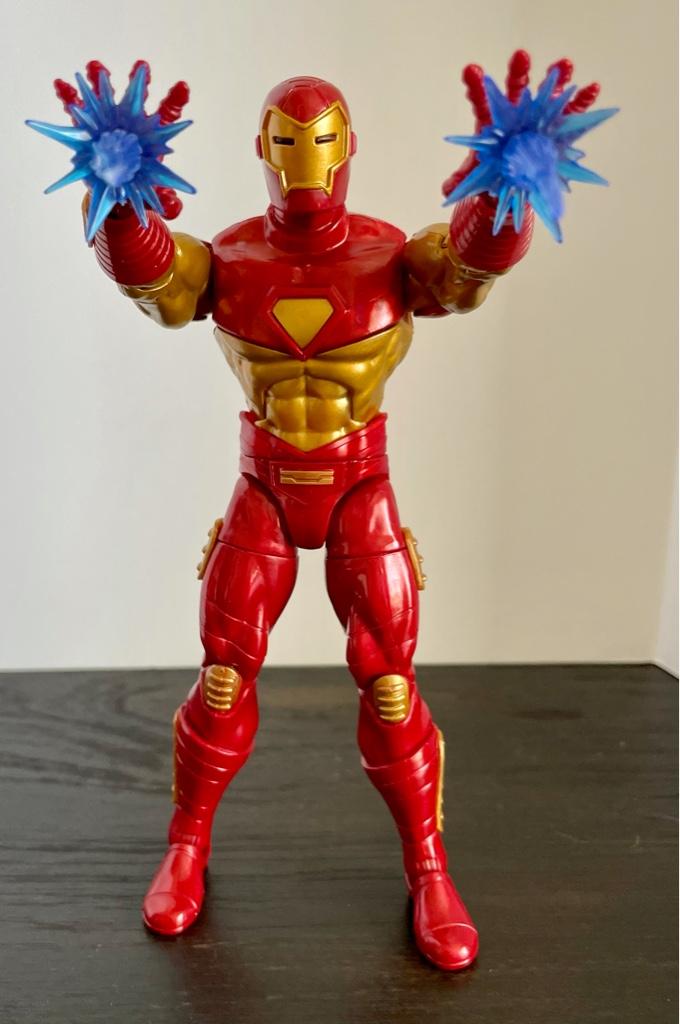 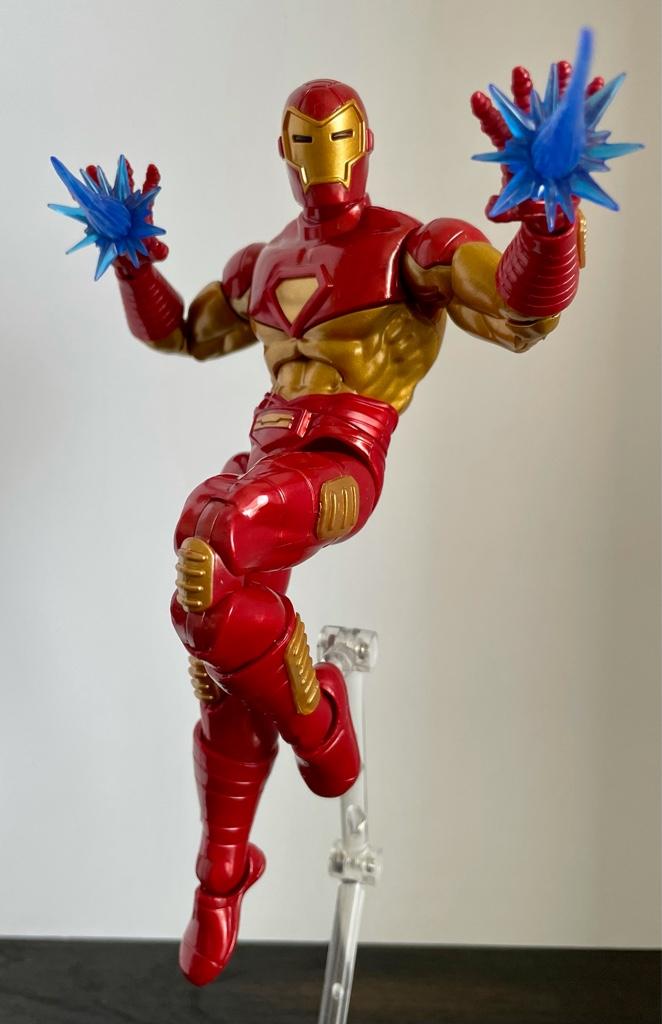 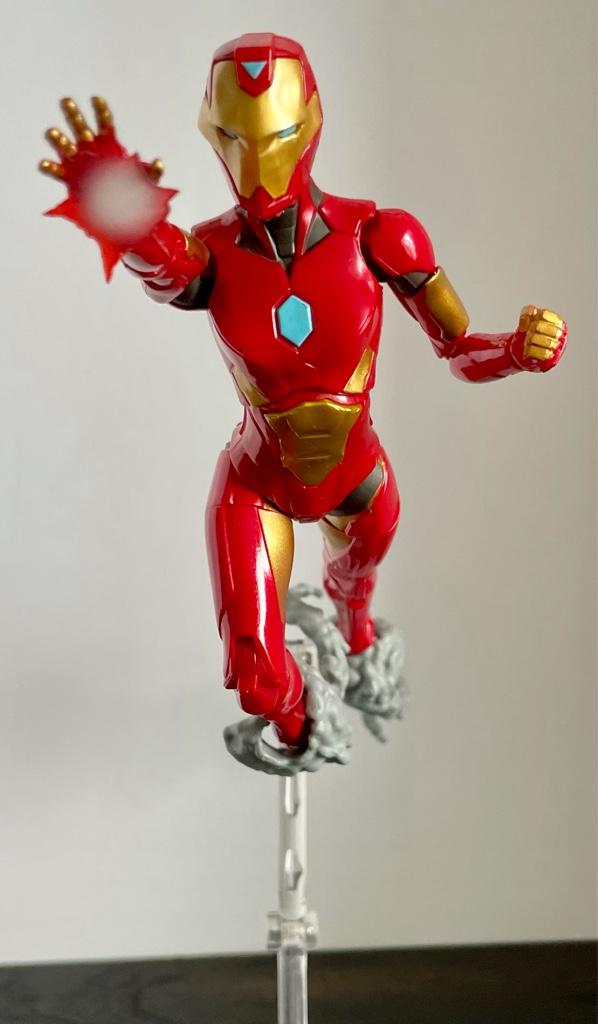 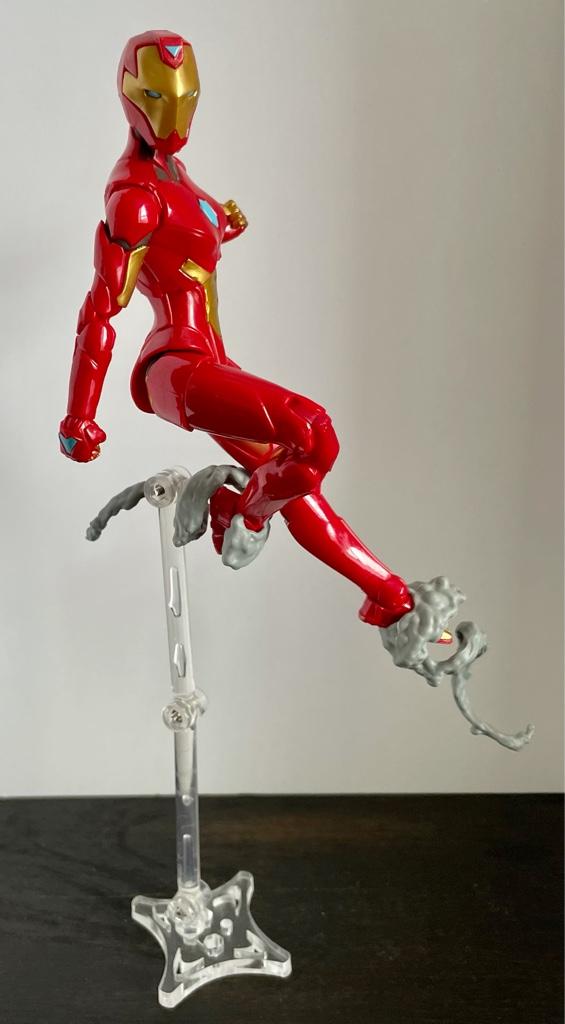 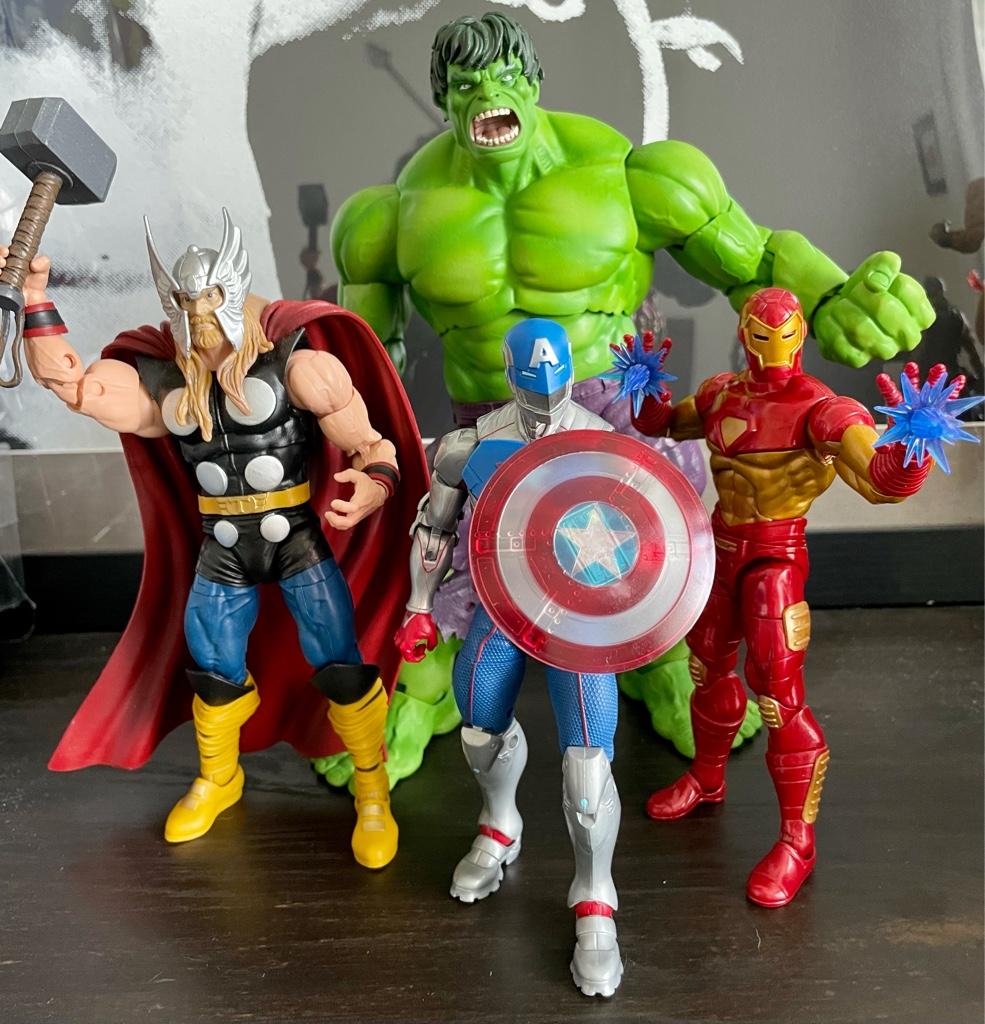 I don’t know what it is about Riri’s helmeted head, but it looks too big in most of the shots to me. Her unmasked head looks perfect, but fully armored she has a bit of a bobble-head going.
Top

Got my loose Ultron and Riri from Dorkside today. Ultron has the mouth painted black for those keeping score. It's too bad it doesn't have the darker lines of the MS version, as I think it would help break up all that silver just a little. I like how they articulated the shoulder armor. It's a great version of Ultron for sure, but I still think I like the one that came in the IM3 (?) wave a little more. But can't have too many Ultrons I guess and definitely don't regret getting it.

Riri came out awesome imo. The only comic with her in it that I've read was the Generations one where she went to the future and she had this armor, so I'm happy with this version of her armor. This is going to be one of those rare cases for me where I default with the unmasked head. It just looks perfect on the figure. My only minor complaint is if they were going to just use hinges on only one set of hands, I wish it was the replusor hands and not the fists.

I had to apply heat to both figures as some joints were tough to free up. Fortunately everything is working as expected and no quality issues. Very happy with both.