IT'S CLOBBERING TIME! Here is the unofficial Marvel toy board. C'mon in and talk ML, MU, Select, and all of the other Marvel toy lines.
Post Reply
1387 posts

I would love to see an updated version of that Torch and Johnny in his red and yellow uniform. Still hoping we get a Hammond Torch somewhere down the line. Maybe a Human Torch/Toro 2 pack even.
Top

DS delivered the FF wave and NWH Dr. Strange and Black Suit Spiderman. Completed Armadillo, that was the important thing.

FF wave not bad. This is not my favorite uniform, but I do like the nostalgia feeling from the cartoon. First thing done was swapped Invisible Woman's head with the Skrull BAF wave figure. Big improvement right off the bat. I respect what they were probably trying to do there, but somehow booted the deco badly. I also swapped Mr. Fantastic's head with the WG's one. Both figures had rather pale complexions, this just looks better to me.

I like what they did with Torch, just the coloration is darker then my preference. Still cool figure, makes me want the Pulse excl. ASAP.

Thing looks good in this outfit, he will be displayed with the gritting teeth head. Legs don't push out at the hips, they are fairly straight.

Psycho Man is a killer new sculpt. I like all the details they included on him, and the control panel he has is straight out of the comics. He is the same height as Reed, so I'm fine with that. Never thought they would make this character much less do this great a representation.

For me my favorite is High Evolutionary. A great portrayal he's going to get some detailing. Most of the figures have warpage from the packaging, need to boil and straighten and HE needs some work on his joints, his hips are kinda loose. Now I really want a 70's short shorts Adam Warlock and a Gil Kane Man Beast.

I like this version of the team and the villains' are excellent new figures.

Although I would like more Inhumans, My priority for next wave is uniform She Hulk, Wizard and Trapster. Something tells me we may never get a comic accurate Agatha Harkness.
Top

I also got my Dorkside case today (thanks!) but I don't think I'm opening them. This will be my carded set, since they came pristine. But looking at them in package, I wasn't thoroughly impressed.

Sue's head is definitely odd, and it's not really improved much by seeing it in person. I really don't get what expression they were going for.

I noticed on Johnny that the flames on his head and arms (maybe more) are painted opaque. Wasn't expecting that, and not sure that I love it. I definitely think the non-flame version might be stronger in this case.

I already got a Psycho Man from Dorkside to open, as well as a Thing, and both are good. Psycho Man is probably the strongest of the wave, being a new, super intricate sculpt. High Evolutionary is ok looking, but almost looks smallish, in the way that early Hasbro stuff looked undersized with tiny heads. Won't know for sure til I get one to open.
Top

Yup - just add her to the list of other notable characters like Mantis, Sersi, M'Baku, Yondu, Killmonger, Mordo, Ikaris...
Top

Is anyone still getting shipping notifications for cases from Dorkside?

I feel like this is what they were going for with this Sue. If they can get the Hughes style face paint going like they did for Family Matters Scarlet Witch, she'll look fantastic. 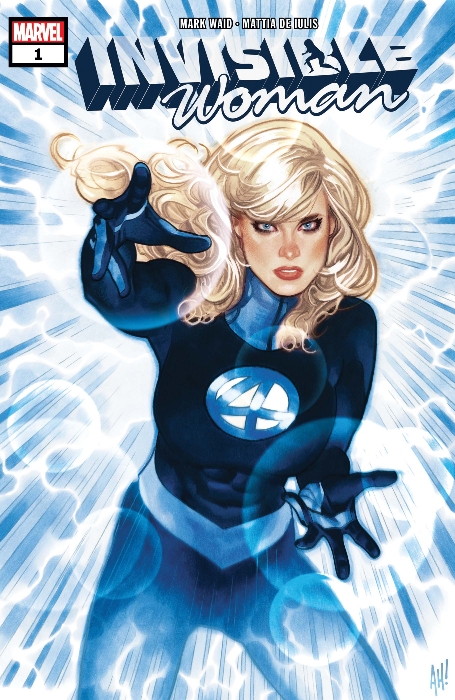 I got my wave in from Dorkside today, too.

Thing is my favorite figure of the character that Hasbro has made to date. The new, gritting teeth head really sells it for me, (as do the Byrne colors, but that goes for all of the Fantastic Four team members in this wave). The new upper thigh trunk sculpts look much better in person. My only major gripe is this odd beige/brown color that seems dry-brushed on him in places. it's not too noticeable until you're right up on him. I would rather have had the rocks unpainted, or a paint job like the Walgreens figure had.

Mr. Fantastic is pretty cool with his new interchangeable coat, and I hope to see more things like this going forward. I'd love to get a classic Bruce Banner with this feature. I'm still not a fan of those effect hands, though. Otherwise, he's pretty cool.

Invisible Woman... Well, thankfully I turned the 2020 Sue into fodder and had her head left over. She looks infinitely better now.

Human Torch is a version I've been asking for for a while: No "4" symbol with black lines, and... he still falls short. Having a translucent flame backpack and twisty flame pieces (the same ones Wanda came with for "Civil War", but in orange) with painted hand, forearm, and head flames just looks really off, and it's really hard to ignore. He's probably the best Johnny we've gotten to date, but, looking at the others we've gotten in the line (Troll-Hair Johnny, I'm looking at you!), that's not saying much.

High Evolutionary is way overdo, and a pretty cool figure. I love the pinless, banded limbs. He's got an amazing sculpt all around, but those really stand out nicely to me. I appreciate the alternate hands, though one with a globe attached to an open hand ala "The Evolutionary War" would have been cool. My only complaint is that he feels a little small to me; I always felt that the character should be a little bigger. I get the feeling Hasbro needed the limbs in that scale for another release, and thus, potential reuse won out, but we'll see.

Psycho-Man isn't perfect, but damn if he isn't my favorite of the wave. I love his Control Box sculpt, and the words came out so cleanly on mine. I really love that the bands on his legs don't really hinder the articulation. His head is a little pinched, but it's nothing too terrible ala the Dark Ages of Marvel Legends (remember Unmasked Xorn, Ultimate Iron Man, etc?). I know some people said he's too short, but I disagree. He was depicted as normal or average height for the most part (well, okay his exosuit was, anyway). Also, I wish the Control Box had a peg that inserted into the open hand so that he could hold it more securely. Overall, the madman's sculpt is just phenomenal, and he's a must have!

Psycho-Man, Sue and Reed have some really tight joints, so be sure to heat the figure up and fix that before getting them into anything too crazy in the poses department.

I love the wave overall. The Retro cards are awesome, as is the team's colors. Plus, we got to get two much needed villains at long last (I'm truly thankful for all of the classic villains we've gotten over the past year). I can't recommend this wave enough, despite all of the little flaws here and there.
Top

gpmartin414 wrote: ↑
Thu Oct 28, 2021 3:19 am
Is anyone still getting shipping notifications for cases from Dorkside?

I got a shipping notification for my case late this afternoon.
Top

DaThing wrote:
Sue doesn't like quite as bad in person but still not as good as the 2 previous versions. My only gripe is the 4 on her chest is smeared/scuffed so I may have to try and find another one.

My Sue has a smeared 4, as well. I hope that’s not a widespread problem.

DaThing wrote:
Sue doesn't like quite as bad in person but still not as good as the 2 previous versions. My only gripe is the 4 on her chest is smeared/scuffed so I may have to try and find another one.

My Sue has a smeared 4, as well. I hope that’s not a widespread problem.

Yikes, I didn't even think to check. The one I've got I'm keeping carded, so I'm a little less concerned, but yeah, that's two for two in the small number of folks who have this set already? How about those who have found at Walmart?
Top

Mine actually came from Walmart and I'll have to check later to see what prod number it is.
Top

Happy to hear others are getting these already. I ordered from Target so no news yet, but at least I got them for cheap.
Top

Today was fantastic thanks to Dorkside Toys! 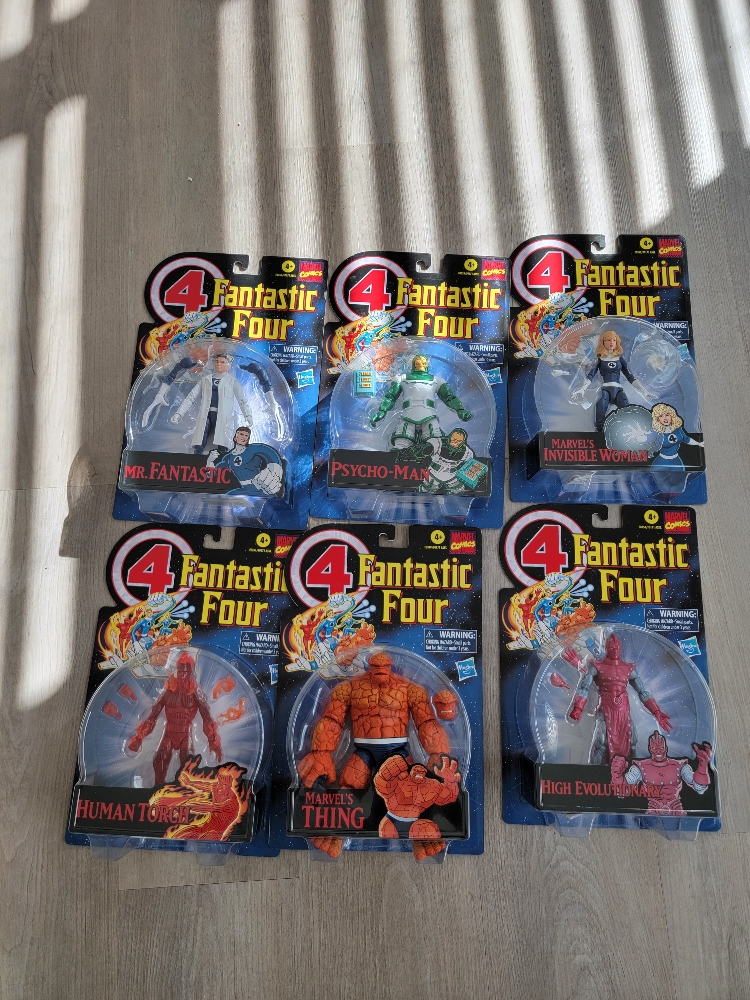