F-TEAM! ASSEMBLE! Doo doo doo dum dum! - Not all toy topics can be assigned a famous block. Talk about the rest of the toy lines here!
Post Reply
489 posts

I'm disappointed that there is no Simpson in this wave. Next one better give us both Marge and Lisa.
Top

Well. I'm a bit disappointed. I know they have their reasons for not doing the main cast, but this wave feels like it's missing something. A normie Marge or Lisa would have rounded it out perfectly. I think they all look pretty good. Kang and Kodos look great but $150 for both is rough. I'm not a big price complainer but it's hard to see the value here-- I have a MAFEX Venom and Spider-Man on the way, both of them plus shipping from Japan come in way less than those two, and shipping isn't even included with them (I think). Apples to Oranges, sure... but as a customer at the end of the day, value is value, and the only thing I can use to apologize for the price is that they're the only game in town and might be the best shot at ever owning these guys in plastic form. I'm not sure that's enough this time. I wish they'd also show more range of movement in the promos... can Ralph even hold the banana to his head? Help me justify spending $55 a pop, pleassee!!
Top

The hair on Ralph looks a little too thick. But otherwise, they all look great.

I just can't justify the cost of these. They've already gone so deep with the GI Joe ReAction figures. If they had a larger selection of Simpsons ReAction figures beyond just the McBain ones, I'd probably go in on those. Even if those are also overpriced at $20, that would still be a lot more affordable than these. $75??
Top 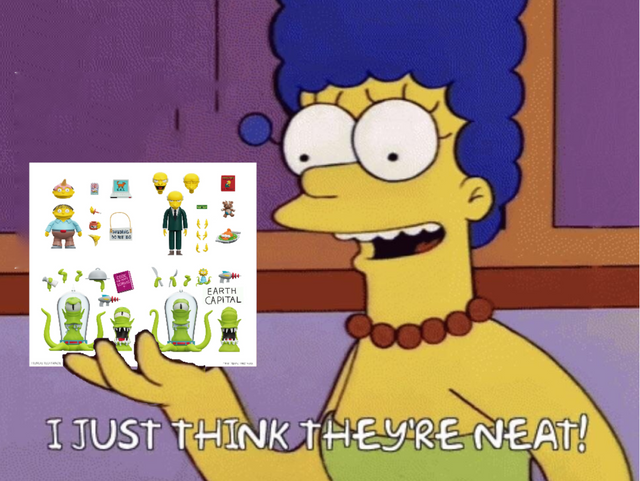 They look good, but I feel like with Wave 4 they just need to get it over with and do a four-figure wave of the family in their normal appearances. Then just go back to weird stuff for as long as people buy it.

The longer the line goes on, the more it feels like they're making a TMNT line without having released the turtles.
Top

I’m probably entirely out at this point. The prices just aren’t justified for what we’re getting. Super7 isn’t super small anymore. They’ve got overpriced product rotting in every Target these days. So their quantities seem to be up enough they aren’t in low-run pricing thresholds anymore. And these just aren’t significant enough of an upgrade for WoS and they’ll never go as deep. There are a few figures that are still tempting but Mr. Burns being my favorite character and not wowing me is a big problem. So sad.
Top

I still wouldn't call Super7 "big" as far as toy producers go. Correct me if I'm wrong, but the only Super7 stuff I see at Target is ReAction which is cheap to produce and only select lines seem to make it there. The Ultimates are still comparatively smaller, but I do wonder if we're in for a course correction soon. It seems like the early waves of ThunderCats and TMNT had a lot of people come to the product late. Aftermarket prices were crazy, and thus retailers like BBTS and Entertainment Earth went in big on future stuff. Now we're seeing the result of that is a lot of product hitting clearance. Entertainment Earth can't seem to give away their exclusive Mutagen Man at this point. It's not necessarily gloom and doom, but I can foresee those outlets ordering less from Super7 going forward. Personally, I'm not buying the aliens at 75 a piece and I'll wait and see if they hit clearance somewhere down the road, but it also might not happen as I don't think many retailers are going to order a bunch of these things and I'm fine with missing out if that's the case. I do really want to see some finished product for this line too as I worry their approach of minimal paint is going to result in these guys looking kind of cheap. If the only thing distinguishing them from the World of Springfield line is a larger scale and some articulation cuts then that's going to be a hard pill to swallow. Unfortunately, wave 1 is still in the tooling stage so we still have a ways to go before we have any of these in-hand.
Top

I think it is mostly just reaction stuff at Target, but if you’re at target you aren’t a small toy company anymore. Midsize at least. 4 Horsemen aren’t at target. They put out about 1, maybe 2 waves a year. They’re a small company. Pops are cheap and easy to make but Funko is far from a small company so I wouldn’t say just because it’s reaction that is at retail doesn’t mean that isn’t a significant achievement. Even Hasbro has its far share of fan channel items retailers don’t want.
Top

In defense of the price, If this pic is accurate, Kang and Kodos are BIG 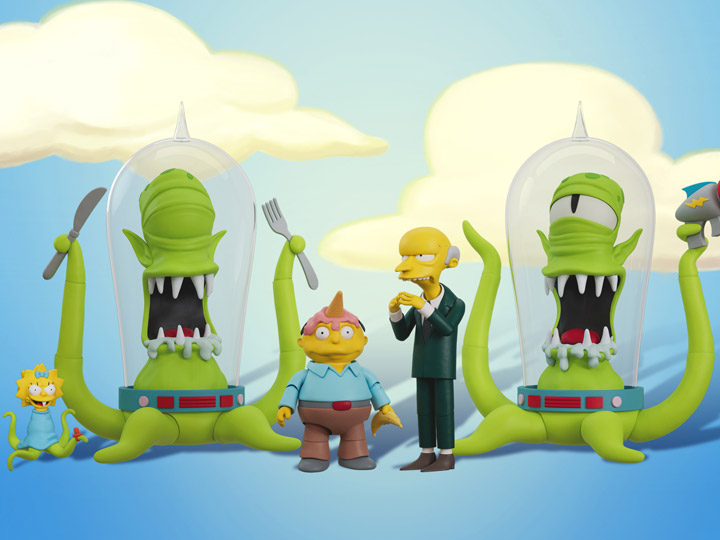 We should have gotten Smithers with Burns at least in this wave. Ralph is an odd one out of a natural pairing of two pairs.
Top

Buttmunch wrote: I think it is mostly just reaction stuff at Target, but if you’re at target you aren’t a small toy company anymore. Midsize at least. 4 Horsemen aren’t at target. They put out about 1, maybe 2 waves a year. They’re a small company. Pops are cheap and easy to make but Funko is far from a small company so I wouldn’t say just because it’s reaction that is at retail doesn’t mean that isn’t a significant achievement. Even Hasbro has its far share of fan channel items retailers don’t want.

The distribution on Reactions isn't going to have much impact on Ultimates, unless you want them to take the money they make on the one line and use it to subsidize the other, which doesn't make much business sense. Ultimates are a niche line with a niche price point. Brian has said some figures sell in the low thousands (like 4000 or less) which is not a lot but they're able to make it work. In our bubble, it may seem like Silverhawks is a million dollar idea, but that line, even at a cheaper price, would flounder at mass retail (not that it would have much chance of getting in without a TV show). The comparison to 4 Horsemen isn't entirely fair either, since making their own toy lines is basically their side hustle. Their main gig is sculpting figures for other companies.
Top

so yeah the aliens are huge and the price make sense.
Top

I like the aliens and they're iconic enough that they could be a one off purchase. That said, they're too rich for my blood and I'm not all in on this line or anything. I'm content with my KidRobots.

But I think the value isn't terrible considering their size.
Top

so yeah the aliens are huge and the price make sense.

If those numbers are accurate then they must be measuring to the tip of the dome on the aliens or their group shot is not in scale because there definitely is not 4" between the top of Burns' head and the top of Kodos' head. Regardless, size at this scale has a very negligible impact on costs. Companies pay for the plastic that gets loaded into the machine and usually there's materials left over that gets junked. It only affects things on the margins and if it's significant enough it can be rectified in other ways, like the two aliens sharing a lot of the same tools, which appears to be the case. And they can also tool fewer accessories. It's not like we see a comparable price break on small figures like Ralph and Bartman so I don't see how there's 20 bucks in added costs between these figures here. This just feels like a company knowing that consumers will perceive more value out of larger figures and taking advantage of that. And if the line needs that sort of thing to be profitable then so be it, but I doubt the markup is a true indicator of the costs involved here. About the only thing that would explain the added cost, for me, is if they went with an actual glass dome or something comparatively expensive on these guys, but I doubt that's the case.
Top

Hmm, good point. Those figures are pretty big and kiiinnddaaa sooorrtttaaaa seem worth $75. I'll probably sit most of this wave out though except Ralph and see how my wallet does for the rest of the year.

I can't help but compare these to NECA's cartoon TMNT line. On average, about $25-$35 per figure. Matte paint, lots of accessories, and pretty good articulation schemes, and some huge figures... Krang, Chrome Dome, The Pizza Monsters. Not import level engineering but the characters still look great in so many poses - they really are action figures, not statues with joints. And there are deep character cuts a plenty. I know Silverhawks is pretty niche but is a Bart Simpson that less viable at Target than a Muckman, or an Anthrax/Scumbug, or a Zach and Smash? The original 4 brothers haven't even been on the shelf that often, yet most of their array of obscure characters fly off the shelves. And, Playmates has seriously blocked production run size and how people can buy those figures. Super7 can vend on Amazon, really anywhere...

So it just feels, I dunno, too much for too little. At that price point I really want to be WOW'd, like NECA tends to wow. I say this as someone really hoping and cheering for Super7's ongoing success and the success of this line.
Top

I'd be more ok with them charging more for the bigger characters if the smaller characters like Ralph, or Micky in the Disney Ultimates line, were cheaper.
Top
Post Reply
489 posts