F-TEAM! ASSEMBLE! Doo doo doo dum dum! - Not all toy topics can be assigned a famous block. Talk about the rest of the toy lines here!
Post Reply
798 posts

Thank you for posting that, and the time stamp. I am surprised by her harsh opinion of that film. I remember it as one of the better Disney films, and thought the subsequent few films she mentioned were a step down in quality. But she seemed to think they were a step up.

I’ll have to go back and rewatch it, from a design point of view. See if I can note that “lumpy characters” point of view she is referring to.
Top

Yeah, hard disagree with her on Beauty and the Beast animation. Hopefully someone overrules but I guess I know not to hold my breath for that film now.

Honestly I do think mixed waves is more ideal than themed if they could get out more than a wave every 7-8 months. It’s the momentum that kills mixed waves. For the pace they’re doing now themed is a better way to go I think.
Top

Everyone is entitled to their own opinion, but that opinion on Beauty and the Beast is bad. And I don’t say that as someone who even wants figures based on the film, but that film is Disney flexing its animation muscle after doing a good, but cheap, job on The Little Mermaid and the tech demo that is Rescuers Down Under.
Top

The BatB thing is SUCH a monumentally bad take. Let's ignore that it's just.. not really accurate anyway. Let's also ignore that you shouldn't be casually dismissing an incredibly popular Disney movie for your DISNEY ULTIMATES toy line. Forget all that.

These figures, so far as have been released or shown, are not what I'd call Animation Accurate. At least not in the sense that they're necessarily stylized to look exactly like the art style of the film they're based on. So even if the animation was a little too frumpy or rounded or whatever nonsense... why on earth would that even matter to the 3D action figure version you'd be making? Even a casual glance at Google shows various statues and ornaments and shit like that based on Beauty... that have none of the issues she was complaining about.
Top

Beauty and the Beast is consistently in the top 5 on Disney movie lists, often times I see it at #1. She may not personally like it, but that's a bad take.
Top

Got a notice from BBTS that they are now expecting Wave 2 in October.

I'm trying to ignore anyone who thinks that Beauty and the Beast is anything but an animation classic. (I mean, after a decade or two of fairly "flat" animation Disney breaks out the multi-plane camera, has swooping and spinning camera movements, utilizes the beginnings of Computer animation for the "Be Our Guest" sequence, they do some great lighting/shadow effects... is it as tight animation-wise as say Snow White or Pinocchio, no, but what is?)
Top

I so miss seeing what kind of jaw-dropping hand drawn magic the studio would come up with. Mermaid and Beauty and Aladdin were just dazzling.
Top

Was I in a bad mood the other day and bought Pinocchio just for Jiminy as a form of retail therapy?

But no regrets. After getting Chip and Dale with Pete, I figured it was a matter of time until I found a way to get Jiminy too. So if anyone is interested in Pinocchio minus him, hit me up, he’s going cheap. 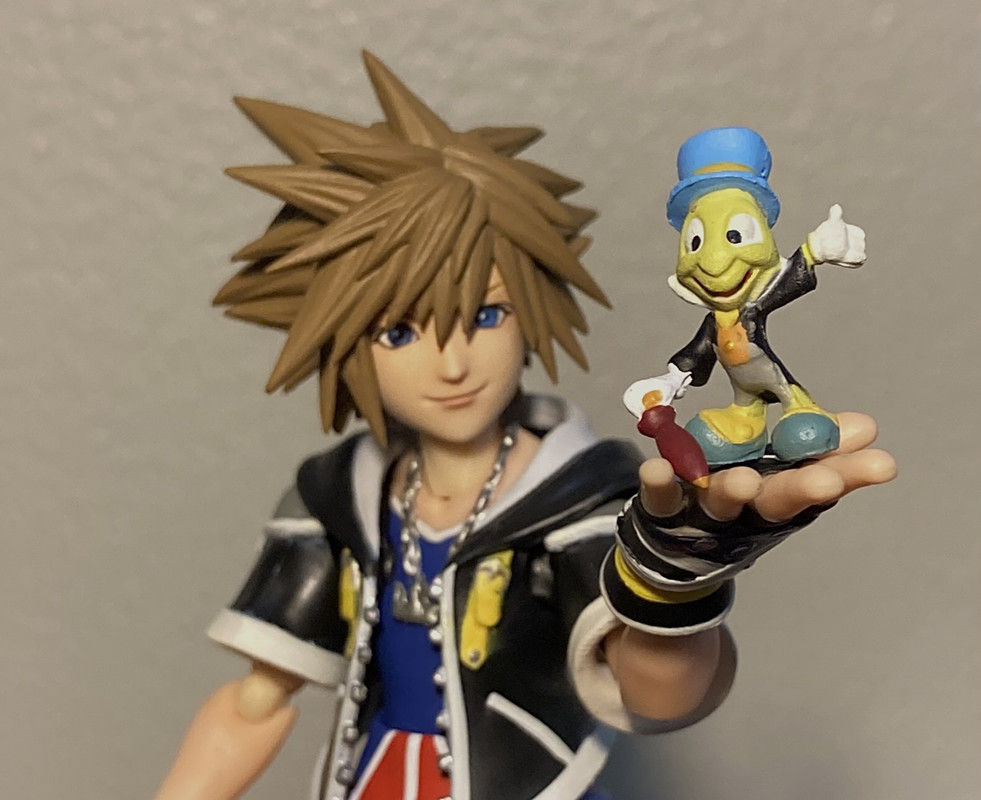 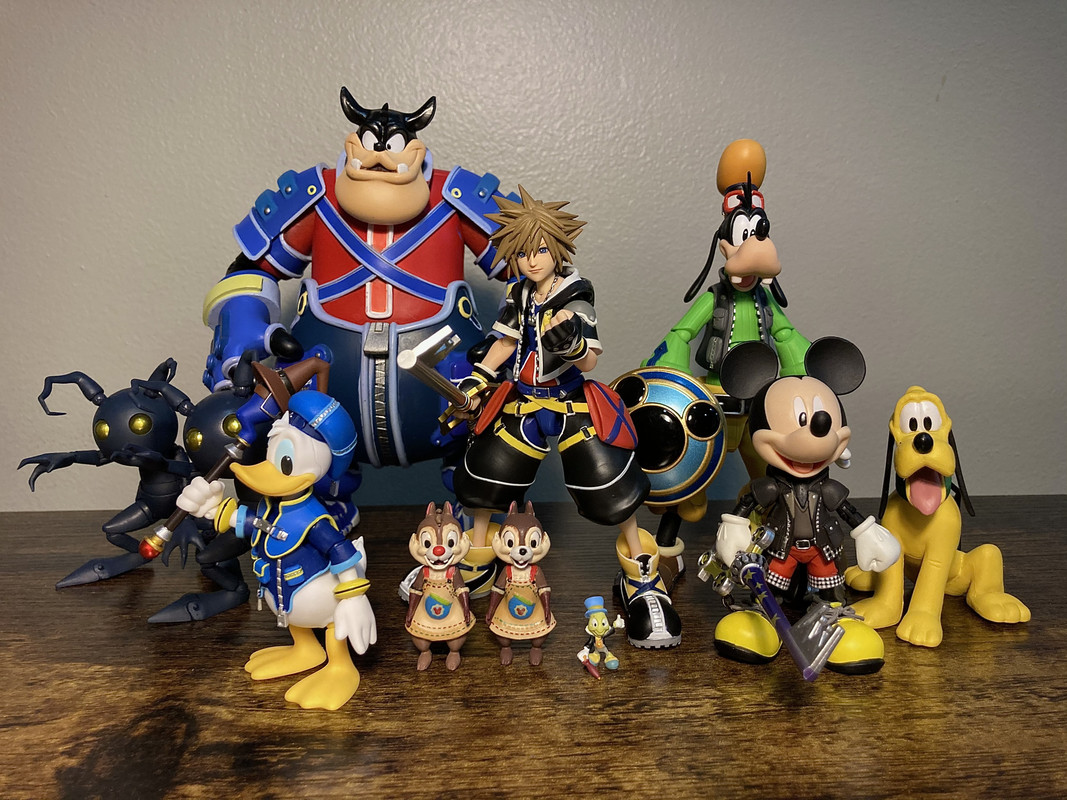 I also have Jemeny displayed with Sora (I use the kh3 Bring Arts one). Great figure. Or little static piece of plastic.
Top

I got Reaction wave 2 in last week and I like it even better than wave 1. I'd honestly be OK with the Ultimates being discontinued and having a wave of these guys every 2 or 3 months. That's not to say I don't like the Ultimates, but for 1/3rd the price, these are a much better deal.
Top

I think the wave 1 Mickey is fantastic, but the wave 2 Mickey was a disappointment by comparison.

There's a place for both lines and personally I'd love to see the 2 scale well together by design. Smaller characters might be perfectly adequate in Reaction form. Imagine a Belle and Beast in Ultimates and then Lumiere and Cogsworth in Reaction for example. Lots of options! Probably not in the spirit of the Reaction line though.

Sent from my SM-G988U1 using Tapatalk

captaincracker wrote: ↑
Mon Aug 08, 2022 11:16 pm
I got Reaction wave 2 in last week and I like it even better than wave 1. I'd honestly be OK with the Ultimates being discontinued and having a wave of these guys every 2 or 3 months. That's not to say I don't like the Ultimates, but for 1/3rd the price, these are a much better deal.

I'm definitely not a big ReAction guy, but I do like the Mickey and Donald I got. I might even like the Mickey more than Ultimates Mickey, but Brave Little Tailor is also my favorite Mickey short so I am a little biased there. I think it's definitely true though that not everything needs an Ultimates release, which doesn't mean I still don't want an Ultimate Donald and Goofy though.
Top

I have room in my collection for both Ultimates and Reaction Disney figures. I'm just really impressed with the little guys so far and I hope we see a lot more waves. Maybe we can get a complete Wise Little Hen collection in 1 wave with the hen, some chicks in a 2 or 3 pack, Peter and Donald.
Top

Okay, so.. I promise I was staying away from these.

And then ToySnowman was selling Prince John for 50 CAD. (If anyone is planning to use ToySnowman for the first time, by the way, hit me up for that 'Friends' code that gets us both 5% off).

I feel like it should go without saying that I wasn't going to turn up Prince John for 50 CAD. It's still pricier than I'd like, don't get me wrong, but it's also like 30 dollars off the regular price and that was good enough to rope me in. As an action figure he's... fine? Slightly less than fine? One grip hand is a bit disappointing. As is how loosely he holds the mirror. What paint's there is done well. The entire leg assembly, especially the ankles, kind of sucks. Hard to get him standing where his ankles don't collapse or his knees don't start bending a little and throwing off his balance. So that's frustrating.

As a character on the shelf? I'm honestly pretty thrilled to just have an action figure of Prince John and when you're not thinking about all the functionality problems, he looks really great on the shelf. So at 30 bucks off the sticker price, I'll call it a pretty good deal, all told.
Top

I have a lot of nitpicks when it comes to PJ, but the sculpt is overall pretty great and he looks like the film character. Those legs do suck though. Mine took multiple shelf dives before I gave up and just leaned him a bit against the wall and he’s been fine ever since. At least he’s not a character that demands a lot of dynamic posing.
Top
Post Reply
798 posts