F-TEAM! ASSEMBLE! Doo doo doo dum dum! - Not all toy topics can be assigned a famous block. Talk about the rest of the toy lines here!
Post Reply
304 posts

Oh, my bad! It was so long ago I just take for granted that everyone saw them when they were shown off at the shows and stuff. There are better pics out there that show their accessories and stuff, but here's ToyArk's pre-order announcement if you just want a quick look at each of the figures in the wave.

Kassle wrote: Cha Cha is a fantastic character on the show (and I love the puppy mask)...but having 2 suited females in the first wave also seemed like an odd choice to me.

Vanya was pretty much a must, based on how central she is. I think it might've felt better to include Allison/Rumor as the second female to help kick off the line. She's one of the higher ranking siblings, has great storylines both seasons and her outfit in this promo (also worn in the last few eps of Season 1) would've been really easy for BFS: they have the skirt, leg & high heel molds from their work on the Zombie Lab line. Even the jacket sleeves & undershirt from the Lone Survivor would be usable. The only assets they would've needed to create were the head/jacket torso. A second head w/ the hair up and a
Spoiler! :
bandage accessory that slips over the neck
from the finale would've been fantastic.

Cha Cha, Hazel & their masks could've been nice compliments to each other in a Wave 2 (alongside Five & Luther). 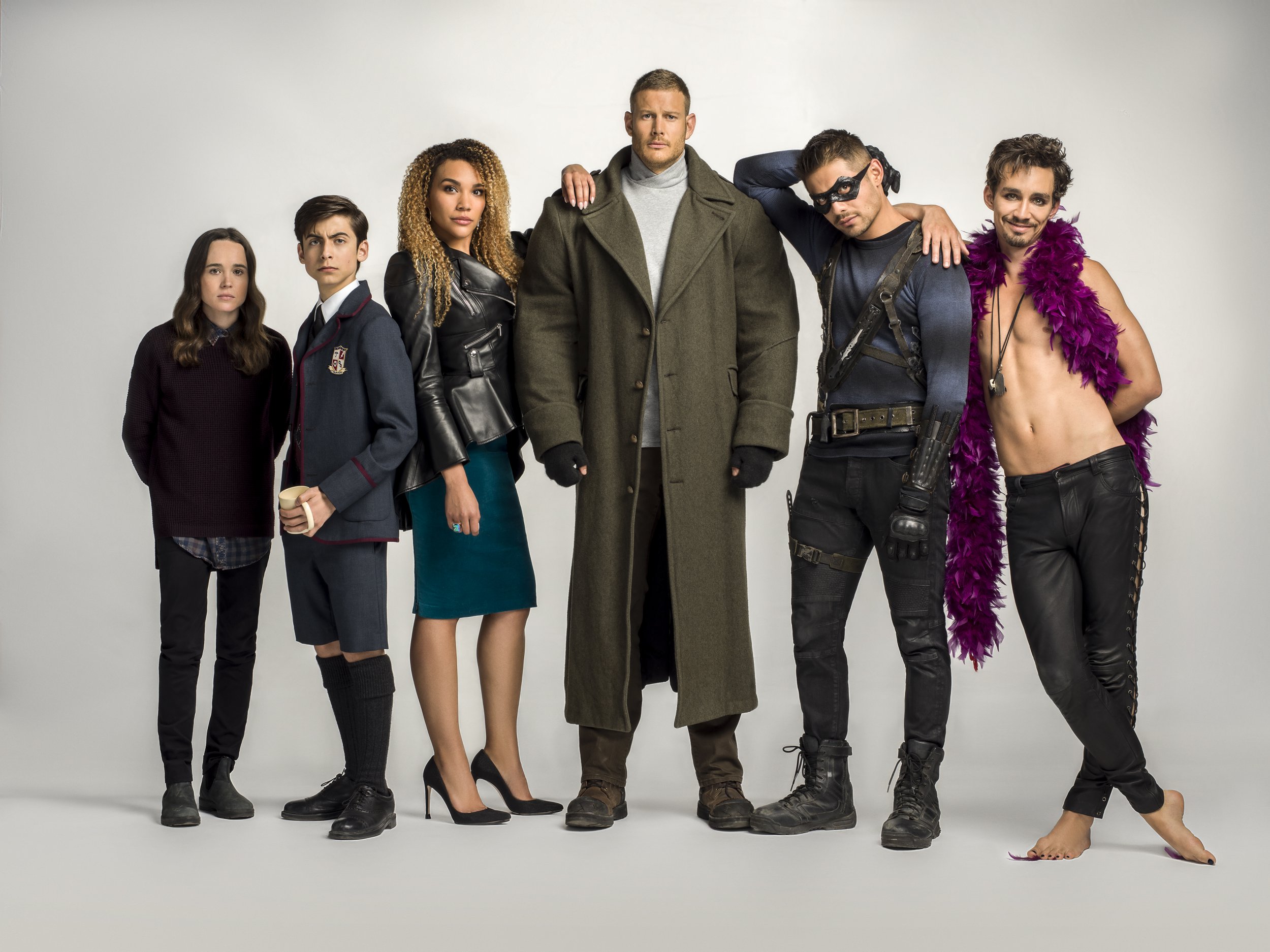 I was also surprised that Allison didn't get top billing.
Although it's worth suggesting that while you see 'two females in suits' - Boss Fight might see 'a new female body much smaller than normal.' Vanya's figure is quite short, and HACKS fans are always on BFS's case about more body types and sizes. I guess they could have done Allison and Vanya instead? But Cha Cha is too cool not to be in the first wave, in my opinion.
Top

LOL first thing I noticed when pulling that pic was how tiny Vanya was - also had no clue!

And yes - Cha Cha is amazing (hear you on the smaller body thing - interesting point).
Top

Five is the buck I'm really wanting, mostly because he's the best character (fight me!).

For wave2, Hazel has to be a lock along with the other 3 living 'kids'. Will we get a wave3? Hargreves, Lila, Ben, and either Mom or the Handler?
Top

Five is the best... oh! I see what happened here. No no.. Klaus is actually number Four. Easy mistake, though! Happens to the best of us.


AdrienVeidt wrote: For wave2, Hazel has to be a lock along with the other 3 living 'kids'. Will we get a wave3? Hargreves, Lila, Ben, and either Mom or the Handler?

We had BETTER get the Handler sooner than later. I love her so much. And she has some of the best wardrobe in the show. After Klaus.

I was thinking a little more about this and, purely speculative, maybe they also prioritized Vanya because of the smaller -internal- parts that may be shared with upcoming Fantasy figures. They've hinted at something major happening with the next wave of Fantasy and a lot of the speculation is that it's either Dwarves or Halflings.
Just a thought.
Top

The Vanya body looks fairly gender neutral as well. I wonder if they're planning to re-use aspects of the buck for Five (now that I've realized he & Vanya are the same height - who knew?).

I feel like Five & Allison are locks for Wave 2. Thinking Hazel is also probably going to be included to compliment Cha Cha. Last spot seems like it would go to Luther? But they may also want a big anchor for Wave 3 (and his new body type might be something they would bank on for that).

I'd like to see Number Six, Pogo, Grace/Mom, Hargreeves, Lila & The Handler at some point. One of the Swedes might be funny - same with Fishhead dude. And, of course, they have the whole new Sparrow Academy gang that has been announced for S3.

Hey all, my film company is crowdfunding to finish post-production on a feature-length doc and Boss Fight Studios has helped out in a BIG way. They are allowing us to include a limited incentive tier for a Frankie the Unicorn Mighty Steed that is signed by the entire BFS team. It's limited to five contributors and shipping is free.
Please check the project out at: https://seedandspark.com/fund/a-trans-story

Hell, I hope we get Old Five too!
Top

Eddiehellman wrote: Hey all, my film company is crowdfunding to finish post-production on a feature-length doc and Boss Fight Studios has helped out in a BIG way. They are allowing us to include a limited incentive tier for a Frankie the Unicorn Mighty Steed that is signed by the entire BFS team. It's limited to five contributors and shipping is free.
Please check the project out at: https://seedandspark.com/fund/a-trans-story

Just quoting this because it's super cool and important. Give the project a look, fellas.

Yeeeah... that's where I'm at. Like, the nerd in me is all 'I will buy EVERY figure of EVERY character that they make.' But the realist in me is like 'do you really want figures of random, normal-looking people on the shelf?' And really, I don't know if I do. I love the show, but I don't know if I could see myself actually spending 30 USD on characters like Leonard.

Boss Fight had their Facebook Live event tonight. I pulled out all the HACKS-specific stuff for everyone here that missed it. Other BFS news in the relevant threads.

Blanks are going to start being run with similar-color carded figures, so we'll start seeing more blanks dropping at the same time as new figures, rather than as separate releases.

There is a plan for a library of more diverse color blanks, which will also include some new tooling.

Fantasy Wave 6 (all female wave) had tooling issues. Wave 6, 6.5, and 7 are all mostly tooled but there are still some tooling issues going on that they're not satisfied with. 6 and 6.5 will be in production shortly once the factory finishes what it's currently on. A major delay is that tooling fixes go to the back of the line in the factory's tooling, so those end up waiting for all kinds of other companies' projects to finish their tooling stage. Ripple effect.

Because the tooling had to be fixed there were some changes made: additions/alterations to articulation. And this will follow into the blanks eventually.
Thigh swivels are confirmed as one of the alterations that's been happening.
Male ankle joint will become a rocker joint.
Changes won't affect every figure across all of HACKS all at once. It'll be a case-by-case scenario as they phase in newer/improved parts.

A "ton" of HeroHACKS in development.
Some stuff they're very excited about that they can't talk about yet.

Zorro wave 2 (Banderas Zorro) is planned to come out 'soon.' (Toy Designer 'soon' so don't get too excited, fellas.)
Other Zorro product coming out around the same time that they aren't ready to talk about. Erik said it will be 'a surprise.'
At least 2 more waves, upwards of ten figures designed, for Zorro. Multiple versions of Phantom and other characters from Phantom and Tarzan are all in the works.
Wave 2 of Tarzan is ready to go into tooling once the backlog has cleared up a bit. Wave 1 was semi-tooled when everything got buggered up and all the slow-downs happened. It was unclear about where in the overall production schedule Tarzan has landed.

Umbrella Academy
Will be produced at a different factory. Expecting 9-12 months until they're out. Wave 2 is in sculpt stage now, hoping to follow fairly quickly after wave 1.
3 more siblings and a surprise character in wave 2, who is a 'he' that is a fan-favorite they get asked about a lot.

Court of the Dead
Same as everything else - still coming but got hammered into the back of the line by the pandemic and tooling issues. They were not specific about where that puts them in the queue.

Subscription Boxes
Good response from customers. Looking to relaunch in January 2022 with a quarterly box. Quarterly box would be a lot easier for BFS to actually make, since they hand-pack it all and that's too much work to do every month.

Customizing Class coming back this fall.

Plans for more steeds. 'Very exciting steeds.' They don't want to send more stuff to the factory until the backlog is cleared so this is all a ways out yet.


Personally, I'm disappointed that wave 6 is so far behind, but it is what it is. Looking forward to seeing exactly how the figures turn out with these changes.
Top

Does the weathered/painted Warrior Skeleton come as a full skeleton with the armour pieces over the top?
Top

TheFallen wrote: ↑
Sat Aug 07, 2021 2:33 pm
Does the weathered/painted Warrior Skeleton come as a full skeleton with the armour pieces over the top?

Are you talking about the single-carded Warrior Skeleton?
https://boss-fight-studio-the-store.mys ... -pre-order

If so; yes, that comes with the armor pieces already on the body in the package.
Top

Yeah I am. I will grab a couple if they are a fully painted skeleton.

No prob. And yeah, they're fully painted. The painted Skeleton Deluxe Accessory Kit was deco'd to match them. I can grab a pic of the ones I have on display (with the deluxe accessory kit parts) if you need.
Top

Because the tooling had to be fixed there were some changes made: additions/alterations to articulation. And this will follow into the blanks eventually.
Thigh swivels are confirmed as one of the alterations that's been happening.
Male ankle joint will become a rocker joint.
Changes won't affect every figure across all of HACKS all at once. It'll be a case-by-case scenario as they phase in newer/improved parts.


I hope the updated articulation will eventually become common place, at least by the next HACKS series (It's the sci fi stuff right?), I keep on flip flopping between "You know I actually don't really NEED thigh swivels" and "If these had thigh swivels they'd be just about perfect".
Top
Post Reply
304 posts