F-TEAM! ASSEMBLE! Doo doo doo dum dum! - Not all toy topics can be assigned a famous block. Talk about the rest of the toy lines here!
Post Reply
2632 posts

Everyone hyped for Vampires and I just want my Elf Queen and moose.

(I went all in on vampires)
Top

Oh yeah! Outside ofthe goblins, the Flock and Brood are my two favorite factions. I am super pumped for this wave.
Top

(I went all in on vampires)

I'm itching to get my hands on my moose and centaur.
Top

Anybody else find that their conscious favorites do not necessarily align with What they have on the shelf? I was fairly indifferent to vamps and skeletons, until I got a few in hand, and now the skellies pretty much outnumber everyone else (at least until Illythia ships). My conscious favorites are the barbarian types, but you wouldn't know that looking at my shelves. Of course, availability and affordability are also factors...
Top

I'm an elf and orc lover, but due to pricing and availability, I have more knights.

From Four Horsemen this morning:

The ground shakes and the Legionnaires turn their attention to the sound, knowing that only one beast is capable of such thunderous footsteps! The TROLLS are coming back to the Realm of Mythoss!

Since we first began releasing Legions figures, we’ve tried to always be flexible and willing to adjust plans based on things we cannot control (shipping delays, global pandemics) and things that we can – like responding to fan feedback. We see the comments and always consider fans in the decisions we make – and sometimes their feedback and responding to what fans want causes us to have to adjust our plans a bit. This is one of those times.

As we announced a few weeks ago, our next planned preorder wave was slated for July. This is the wave that will include the winners of the Mythic Legions: All Stars 5 vote. The last few All Stars waves have also included a reissue of one of our popular Troll figures, and many fans expected that this one would follow that same pattern. As we began assembling this next wave comprised of All Stars winners, Power-con figures, and some brand new items that will be included, we realized that the wave was getting a bit too large and expensive. Cuts needed to be made to bring this offering down to a reasonable size, and the Troll addition was at risk of being cut.

We know fans have been really looking forward to the next reissued Troll, surmising that the mighty Brontus would be next in line for the All Stars treatment, so we really did not want to bypass that release. We basically had two options – 1. Rerelease the Troll early to separate it from the next preorder wave, or 2. Push the reissue of Brontus back to sometime in 2023. We knew fans would not want to wait that long to have a chance to secure the arena troll, so we have decided to adjust our plans just a little and offer the “Mythic Legions: All Stars Trolls” mini-wave starting on Friday, May 27th at 12:00pm EST.

This will be a preorder wave, and it will not only include a reissue of Brontus, but to make sure the arena troll is not lonely, at the same time we are also reissuing the final troll yet to become and All Star – the popular Ice Troll! Like the previously reissued All Star Trolls, these two new releases will also include secondary heads! Brontus will come with his original head, plus a repainted version of the head first offered with the Stone Troll, while the Ice Troll will come with his original head and an icy-deco version of the one-eyed Brontus head (which looks incredible in Ice Troll colors)!

These figures will be available individually for $110 each (plus shipping), and we will also offer them as a pair for the “All In” price of $200 (plus shipping).

In addition to this rerelease of Trolls, our partners over at RetroRagsLimited.com have also decided to unveil a pair of brand new Troll shirts in honor of this new wave! You can see the design for the Ice Troll shirt below! These shirts will also go on sale this coming Friday (5/27) at 12pm EST.

So, what does that mean for the wave containing the All Stars 5 winners? That preorder will still be at the end of July. Look for more details on that wave, including the announcement of which All Stars were crowned as champions and what other new figures will be joining those All Stars, in the weeks leading up to that preorder sale! 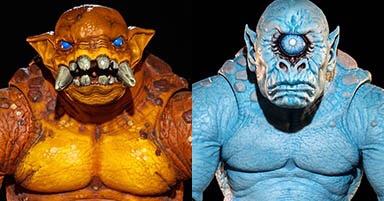 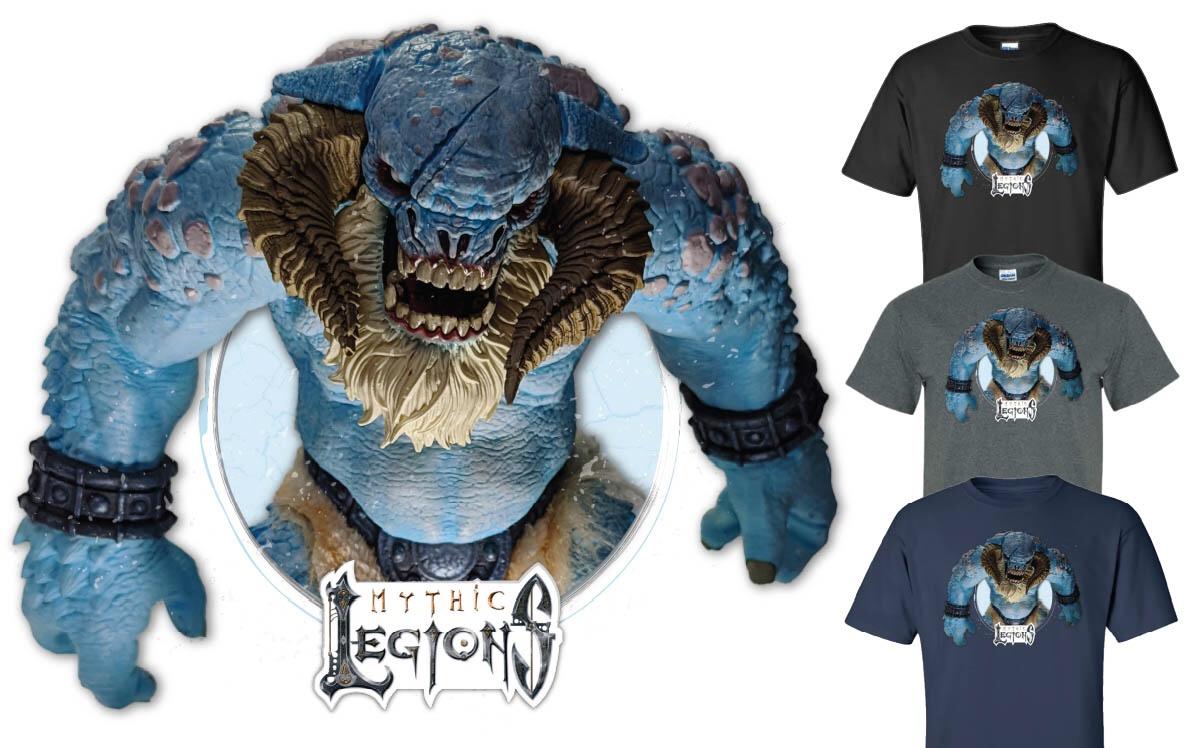 Interesting. I skipped Brontos the first time. I already have the Ice Troll, but I'll be tempted by another due to the new head.
Top

Though I'm frightened to think about what shipping will be, I like the idea of two trolls for $200.
Top

I may finally get a troll. I've held off previously because of the cost, with them included in previous waves I've gone for multiple figures instead of just the one, but with nothing on preorder hitting anytime soon I think I can justify this.

Almost wonder if the shipping prices are going to be so high that BBTS/other retailers would be better off.
Top

Samalas wrote: ↑
Mon May 23, 2022 7:37 pm
Almost wonder if the shipping prices are going to be so high that BBTS/other retailers would be better off.


Yeah, I don't know. Trolls are currently $170 at BBTS. If you're buying both, that's $140 more, and that's not considering tax.
I hope shipping for two of these isn't THAT high!
Top

Samalas wrote: ↑
Mon May 23, 2022 7:37 pm
Almost wonder if the shipping prices are going to be so high that BBTS/other retailers would be better off.


Yeah, I don't know. Trolls are currently $170 at BBTS. If you're buying both, that's $140 more, and that's not considering tax.
I hope shipping for two of these isn't THAT high!

Jesus, guess I never looked at them on BBTS lol, didn't know the jump was that high. Figured it was the standard $15 like most every figure.
Top

If I could afford the entire line, I'd be all line. As is, I gotta just pick as few cherries as possible.

I have Battle Cat & Panthor. I want Stinkor. I have red Krampus preordered, but still prefer the original paintjob. I want the red minotaur. I want the Four Horsemen & their steeds.

I have Famine preordered, but her horse is presold out; hoping I can grab one as POs get cancelled upon drop. I have Pestilence & his horse preordered. Afraid to look on eBay for War & horse. I assume we haven't seen Death yet (I do check the thread more often than I used to, after missing out on Krampus & people telling me Illythia was still up on BBTS).
Top

They don't call you MollyMillions for nothing!

The troll package is a pretty sweet deal and I've always loved the look of the ice troll, but it's not so much their cost that's the issue for me, it's their size. I'm struggling with displaying the horses (and soon that glorious moose).

Here’s the LegionsCon Day 1 Saturday exclusive. Apparently, the skull and skeleton neck won’t be included in the general release. 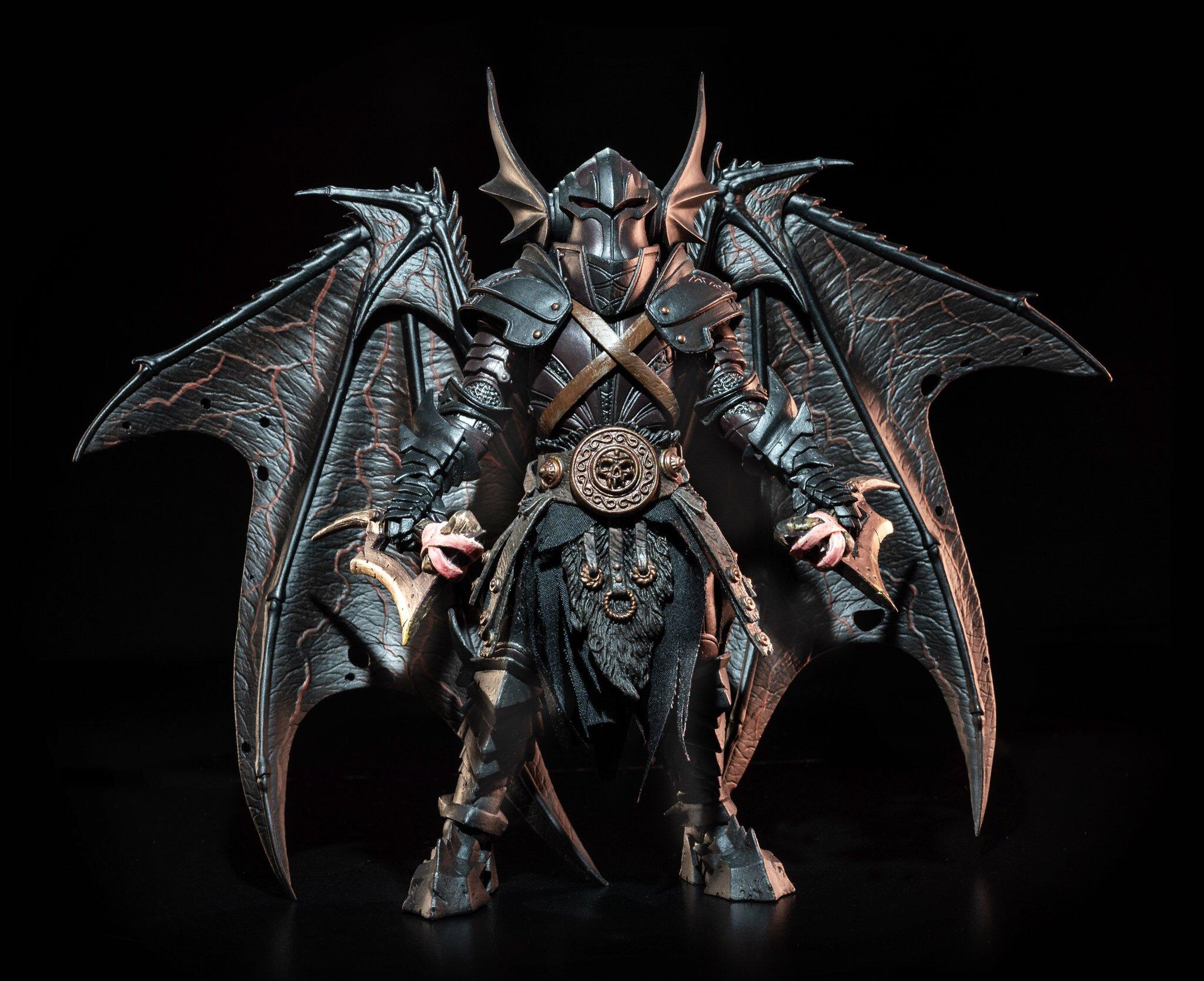 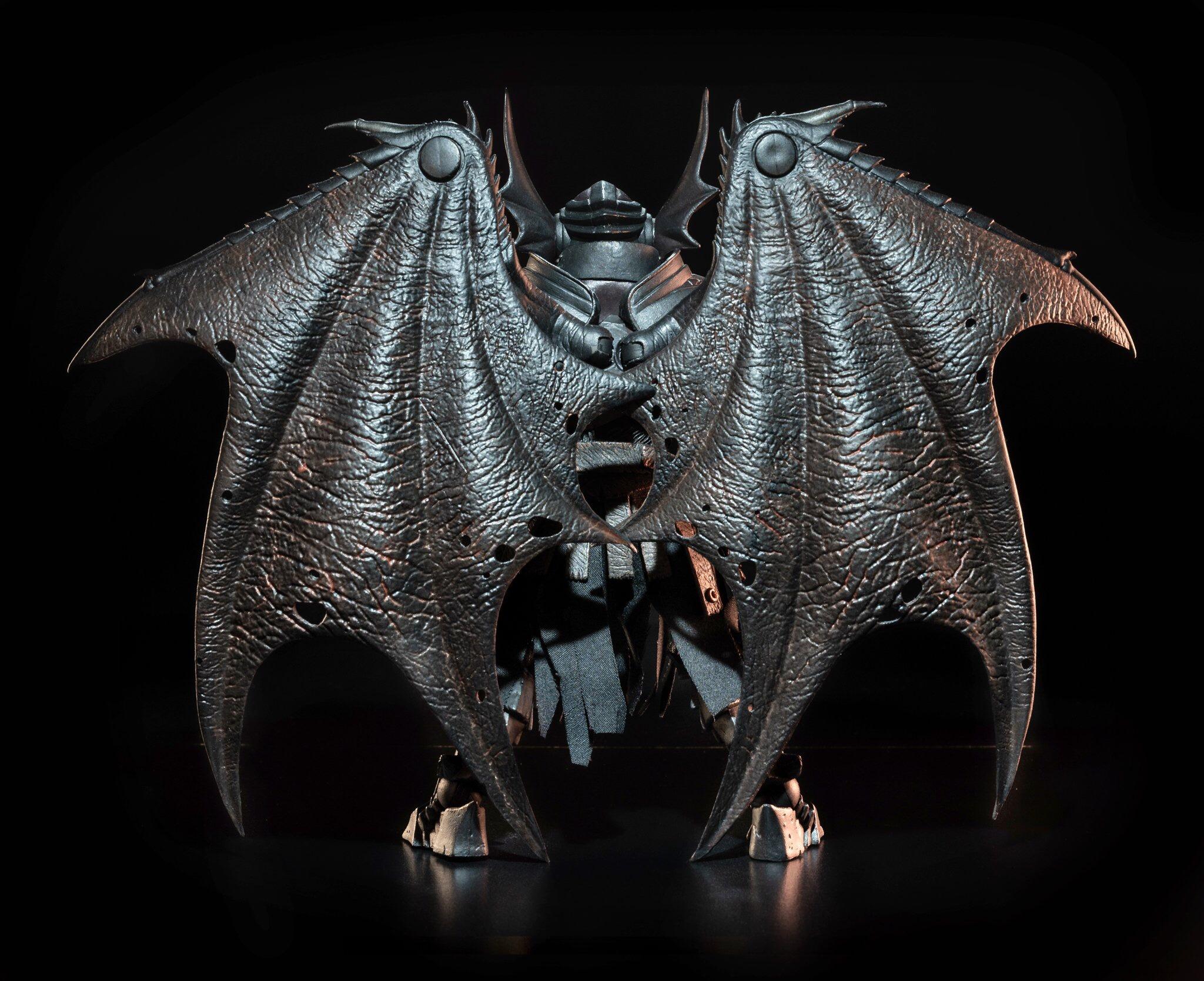 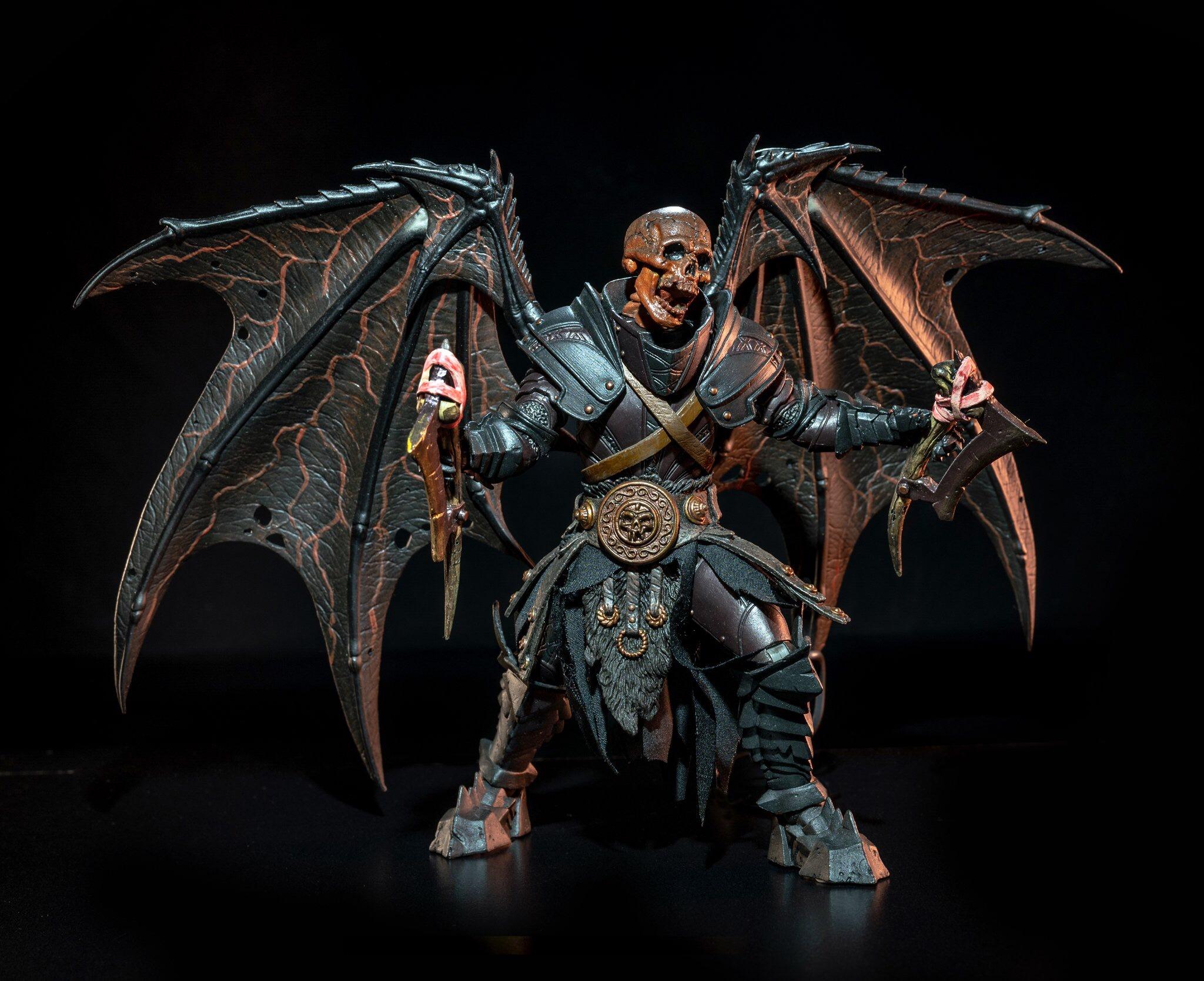 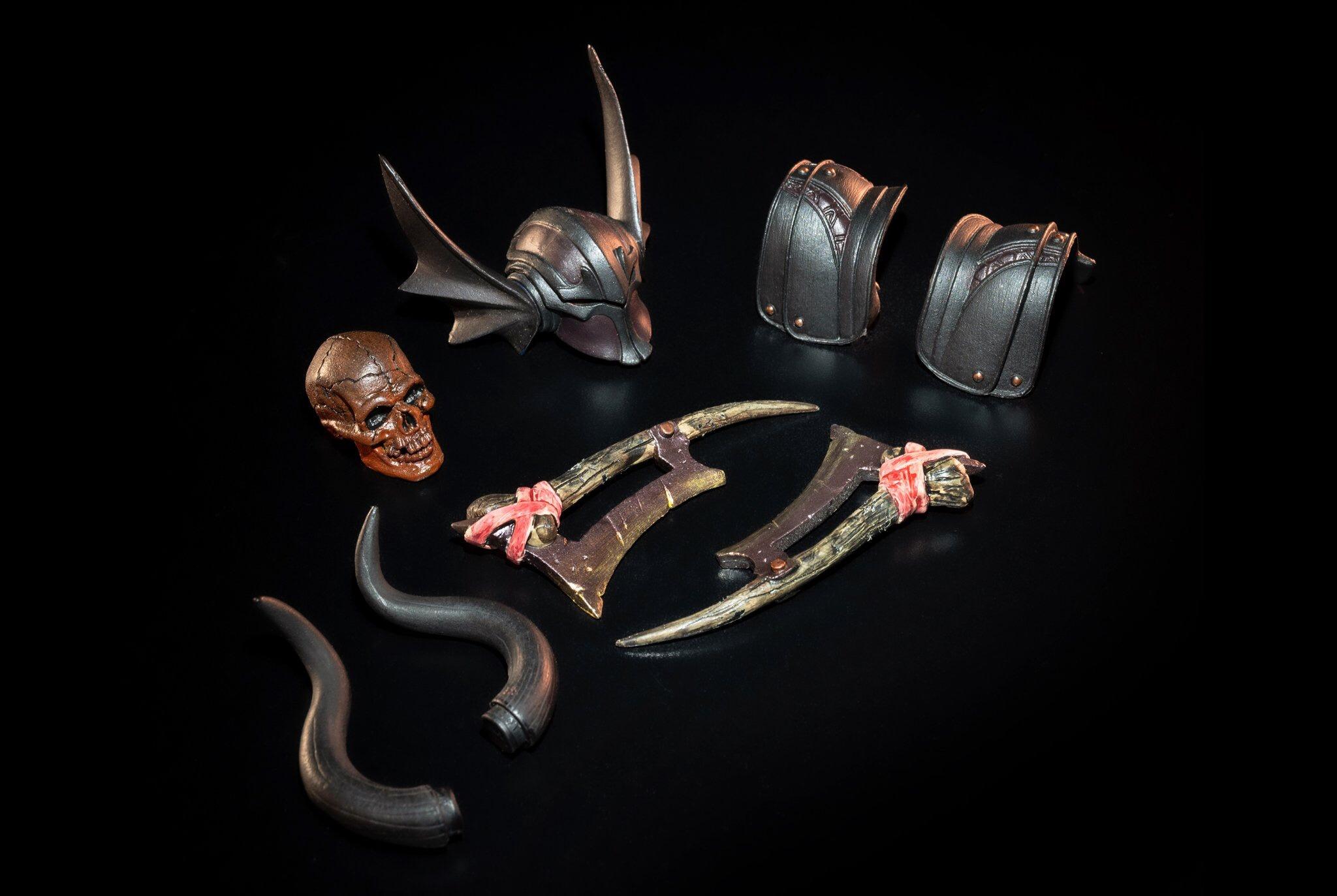