F-TEAM! ASSEMBLE! Doo doo doo dum dum! - Not all toy topics can be assigned a famous block. Talk about the rest of the toy lines here!
Post Reply
569 posts

bigbayblue wrote: ↑
Thu Dec 08, 2022 1:06 am
Well, Santa arrived already. It looks just like the pictures. Mine had sone quality control issues, the most glaring being that the tip of the belt was sliced off at the factory, so it can't be closed.

I've never needed customer support from them before. Hopefully getting a replacement belt will be easy.

Also, a word of warning: that horn is extremely fragile. A smaill piece was broken before I opened the package, and in getting it out of the package I ruined it completely.

Their customer support is pretty great. I ordered two Headless Horsemen and the first one was somehow missing the cape and sword! I let them know and they apologized but said they're not sure they can help but will see after legioncon, at that point I assumed I was SOL. However, right after LC they sent me over a cape and sword. I was for sure thinking they'd forget about me. Not only that--I thanked them during a livecast as a company and the customer service person that shipped it remembered me too.
Top

It comes from an old Santa Claus is Comin To Town figure set: http://www.timeandspacetoys.com/saclcototowi.html

It also has a really cool bare tree (you can see it in the link), but I substituted in some Xmas trees from Michaels.

That's a really great set! Wish I still had some of the Rudolph sets from years ago. They had some similar bases (maybe made by the same company?), and I really liked setting them up in various scenes. Unfortunately, the Ex-wife loved all things Rudolph, so those are the only toys I wasn't able to keep when we divorced.

I have several of those trees from Michaels, as well as similar ones from Target. They are in a BUNCH of my Christmas displays...they're really great for use with Christmas themed figures!
Top

Fantastic figure. I’ve regretted not grabbing the Horseman so I’m glad I didn’t miss out on this guy. I know it’s pure speculation and fantasy at this point but I would 100% snap up a green variation.

Oh and add another voice in the pro Michaels trees column. 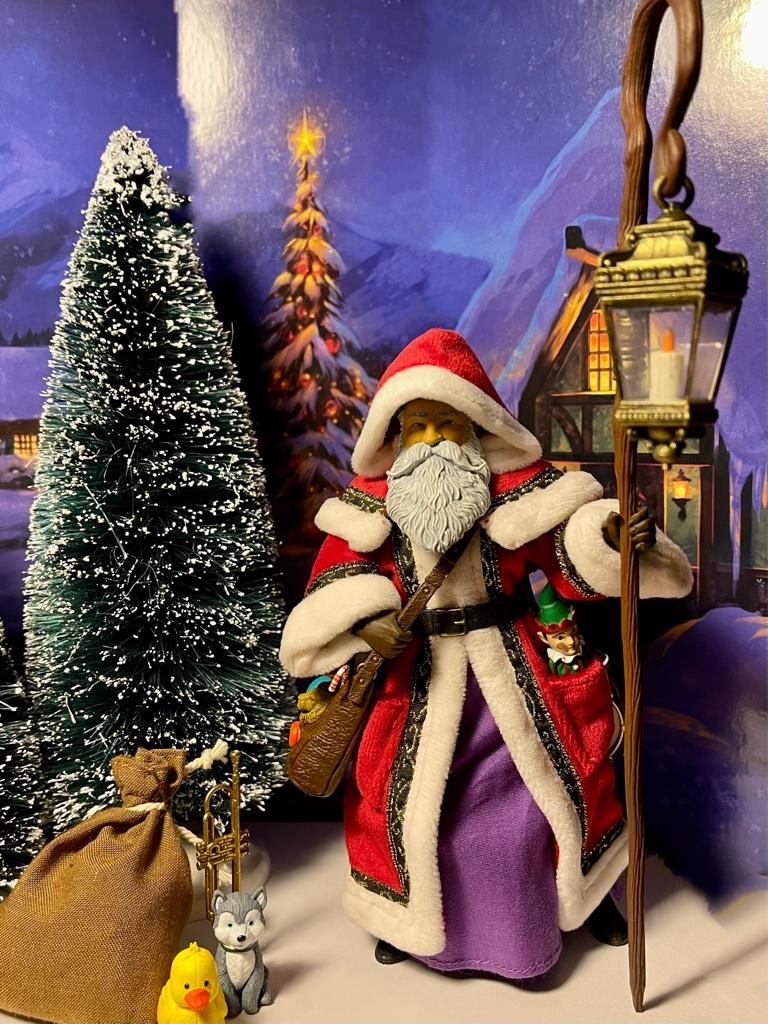 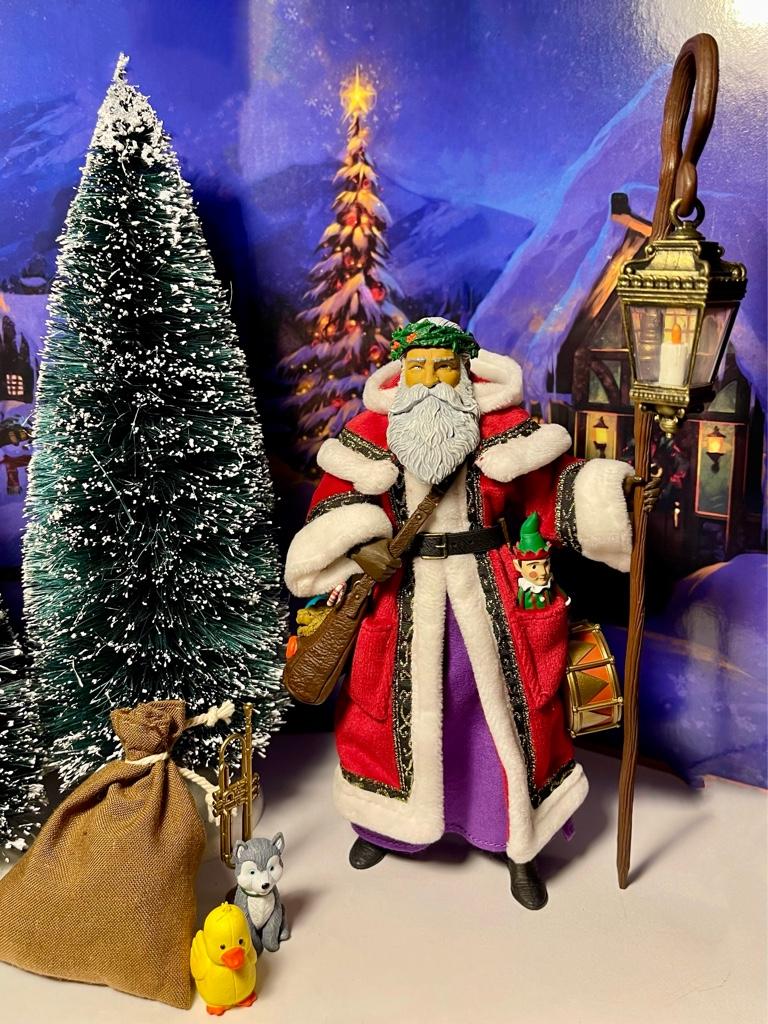 It’s not a story on when I stopped believing in Santa. I handled the reveal of Santa rather roughly for my oldest. He has a tremendous heart. He was heading to 7th grade with the wonder of Santa in his eyes. I decided to tell him “to spare him from the evil of Middle Schoolers” Watching that light extinguished was one of those heartbreaking moments as a parent I want a do over on. I wish I just let him discover it. The desire to protect really backfired here. I should have trusted him.

Each year we had established a tradition of one gift from Santa. My wife and I made sure it was special but never that “one thing” they would say they wanted. The spoken desires or things we would catch we’d farm it out to Grandparents or favorite aunts. Sometimes it would be gift from mom and dad. But every year Santa gift was first one they opened and it was always a hit. I used the same red shiny paper and embellished with green ribbon and drawing gold North Pole hieroglyphs all over with just a Medieval style initial to identify the package’s intended recipient. So my youngest a few years ago saunters up during Christmas breakfast after Santa gift was opened. He casually says, you may want to change your gold metallic marker. I give him a wink and that was that.

We still do the lone Santa gift each year and encourage our boys to be Santa’s of their own. I only ever wanted to encourage the wonder of Santa and the importance in giving.

This 4H figure is wonderful. I’m not seeing an QC issues. The paint on the right eye of the smaller bearded head has a freaking twinkle. It’s really uncanny. The accessories in hand are pretty cool. The filler in the bag were pieces I didn’t have. I like them. I am not sure they alone would prompt multiple purchases. It was a nice surprise. I like the gesture on how the Horsemen handled it. I see Gandalf in the head of the linger beard. His nose is not quite long enough. But I see wizard in that head. This is cool. I wish I had got Headless Horseman but such is such. I’ll enjoy this one!

Got the notice from the Shop app that St. Nick was on his way, and he's already in the main hub north of me, so he should be here tomorrow, Monday the latest.

To add to the stories of believing. I don't remember exactly when I stopped, but growing up, Christmas Eve was usually an event. My father was a ham radio operator, and every Christmas Eve, there would be "tracking" of Santa across the country as other operators checked in to say they spotted his sleigh. We'd sometimes even have other neighborhood kids over to listen in for a while, until we had to get ready for bed, so Santa wouldn't pass us by.
Top

My Santa should be here today. As well as a few other Mythics that were stuck in customs. Anyway I’m really excited for Santa. I got 2 because I needed a 2.0 body for a custom anyway and with all the extra heads why not. I can sell the Xmas specific accessories from one set and it’ll make it a cheap custom fodder fig. Heck that Santa suit on its own from a 3rd party would be at least $50. Anyone on the fence should definitely order soon cause once it’s gone, we’ll you know the drill. I’ve been reading posts about this being a peg warmer but the reality is they made a lot more than the Horseman. In fact Jeremy Girard said they sold more Santas in the first morning drop than they did of the Horseman in total. And on a side note I believe the 2 surprises in the sack are brand new pieces. Happy Friday all!
Top

Absolutely LOVE this figure! Even my girlfriend was amazed at how great he is! 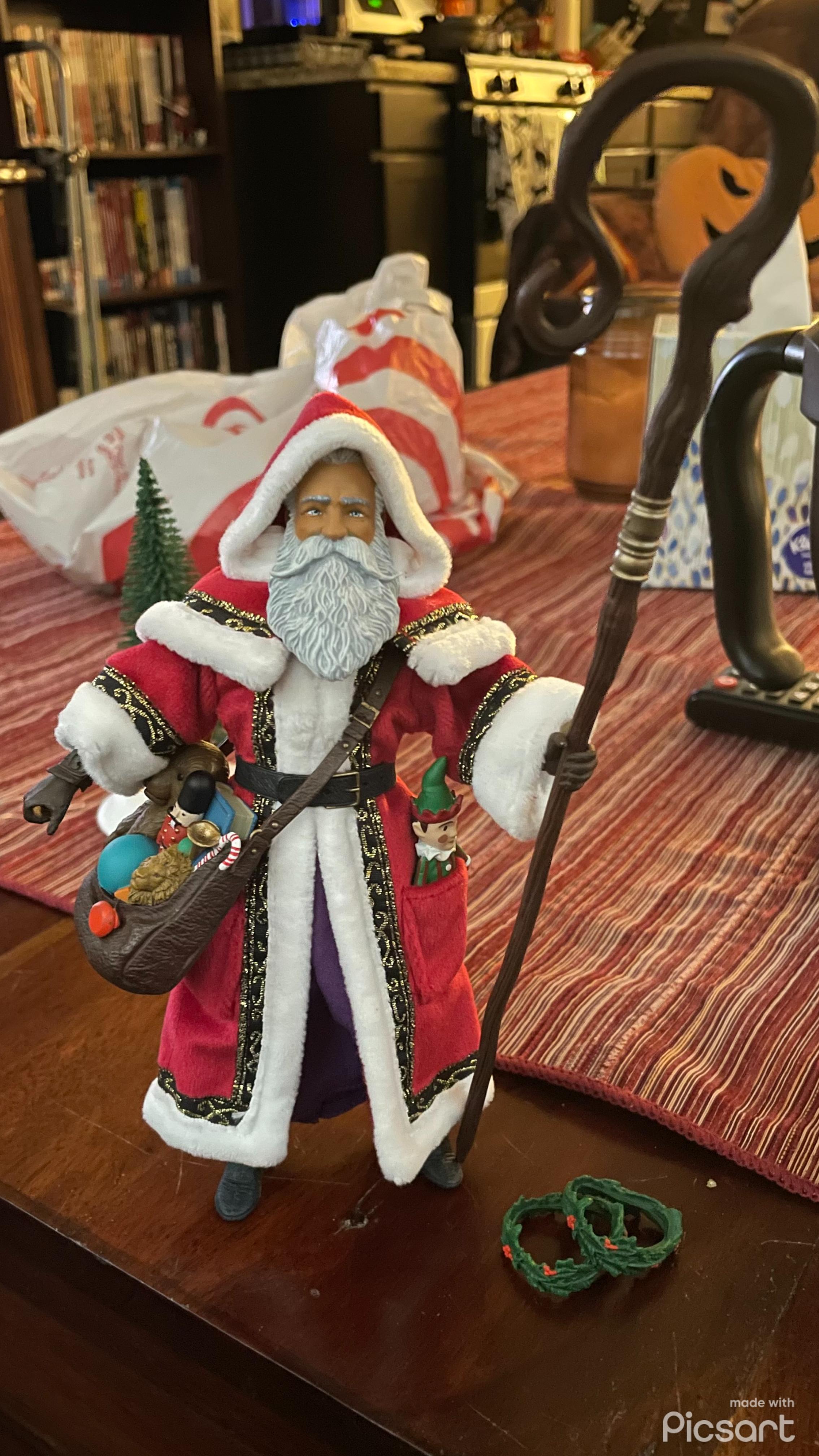 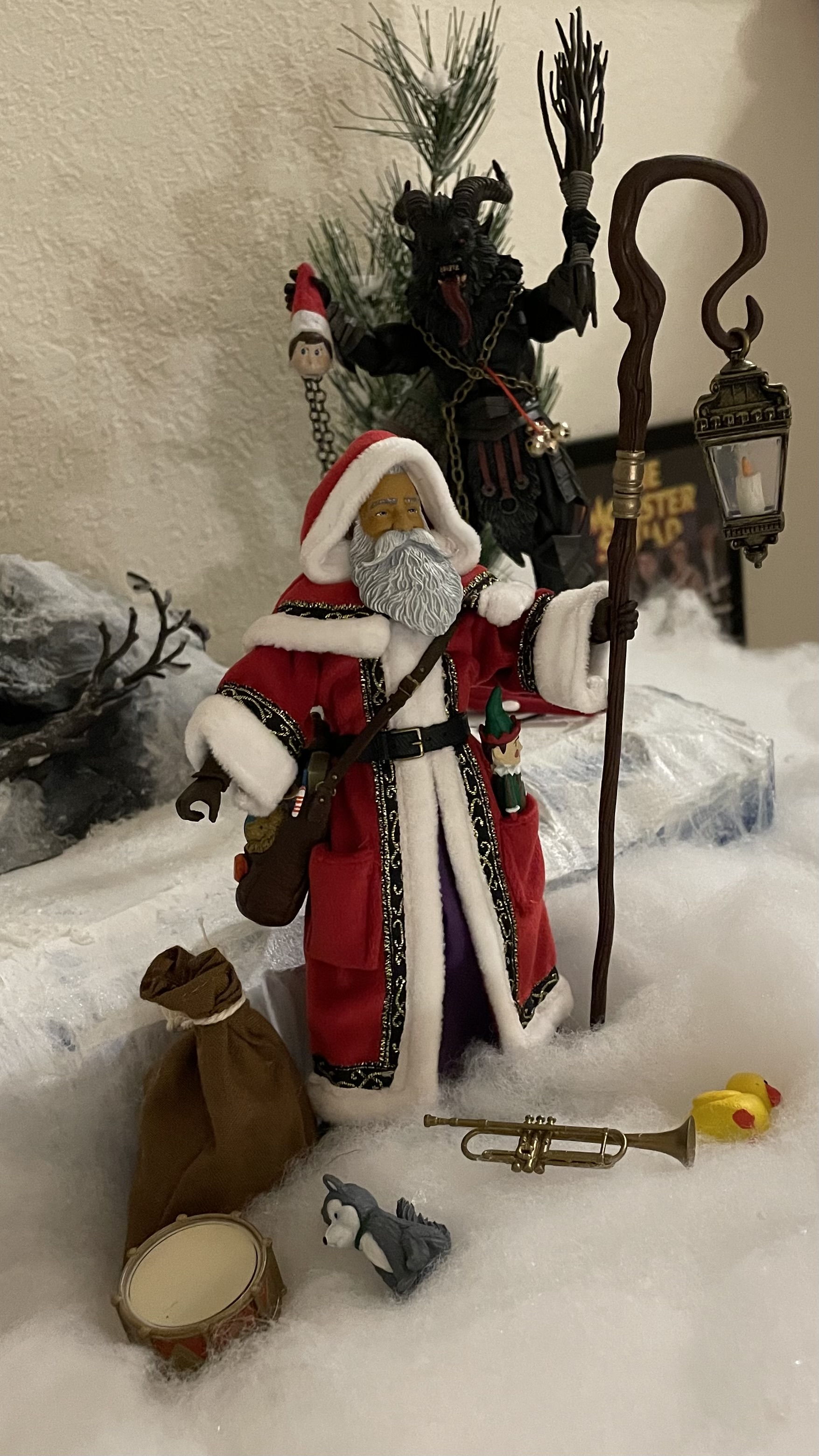 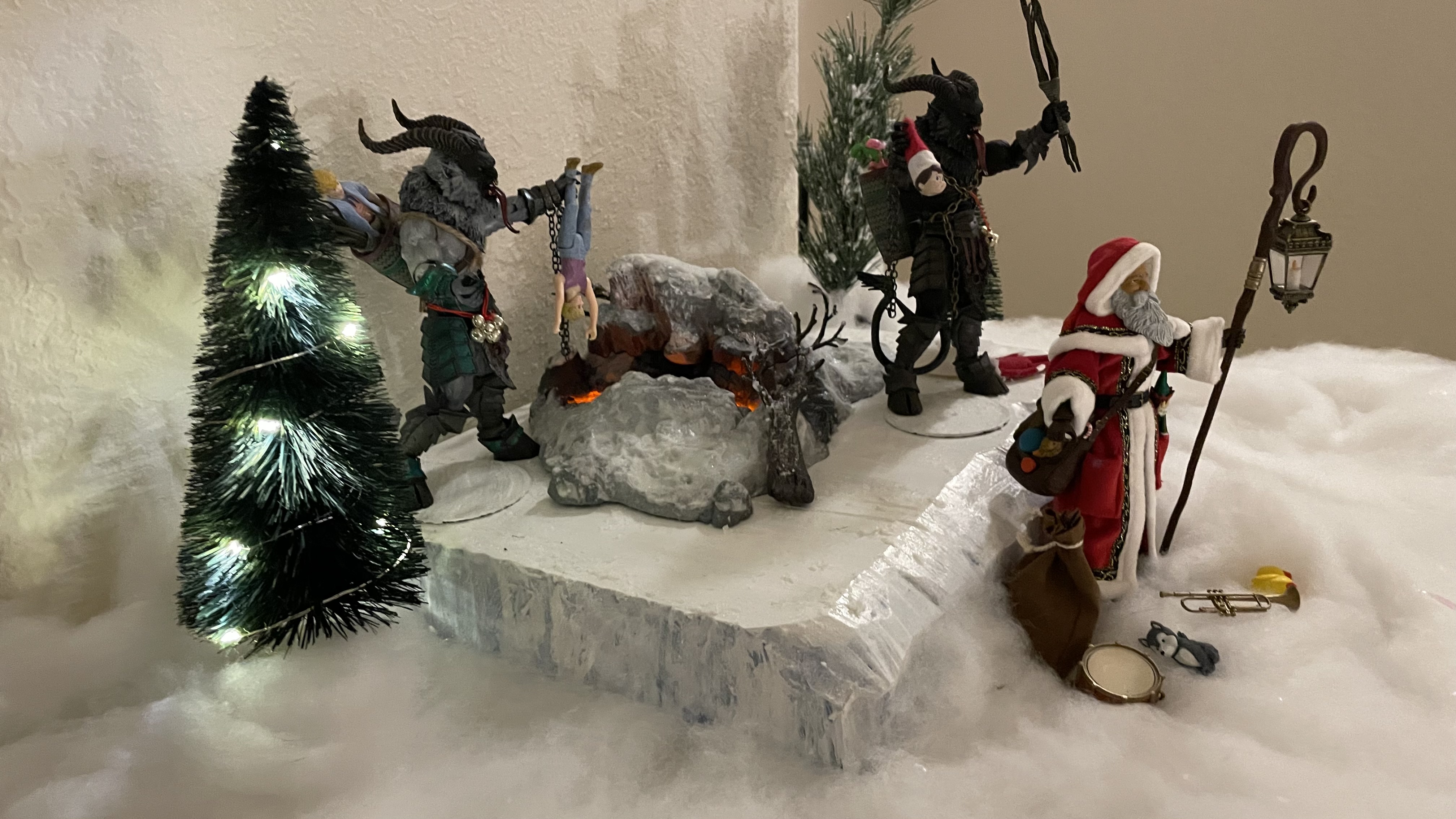 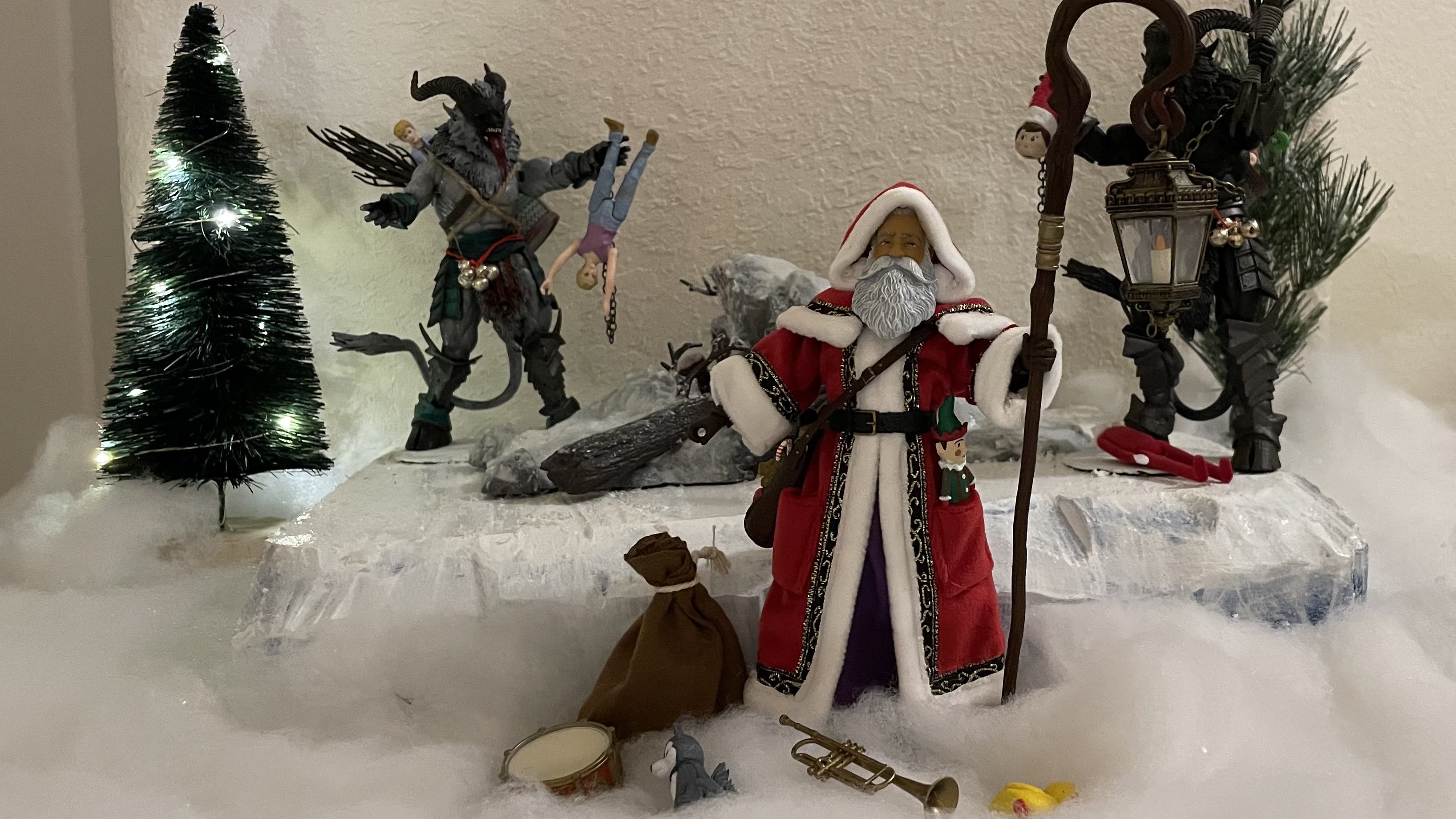 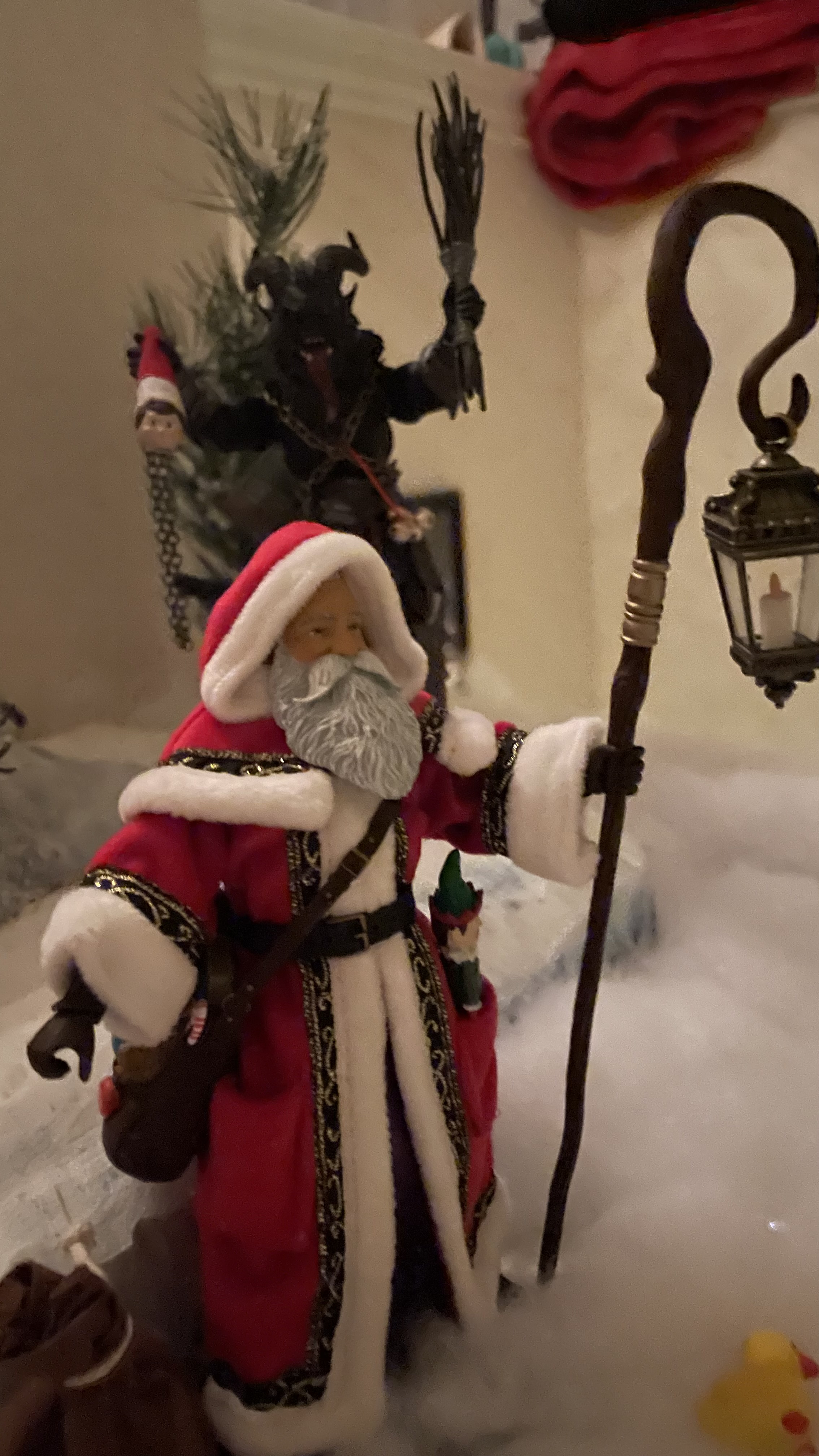 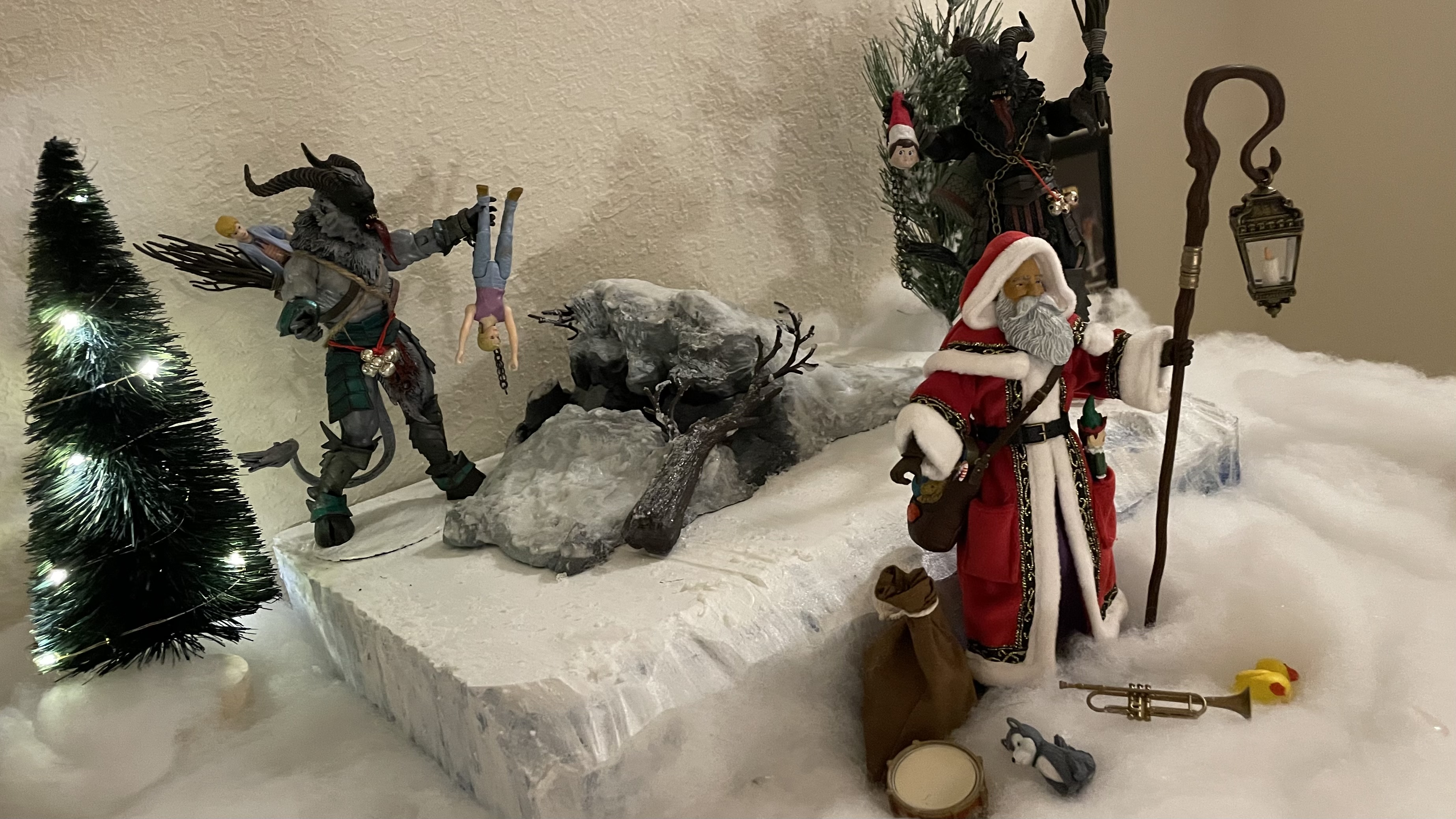 Santa came this morning, as I had hoped, so I don't have to hang around the house tonight waiting on the evening post office delivery. He's basically exactly what I wanted. I think I'm going to pop the default head off and go with the shorter beard as that should work better with the hood. I just want him to warm up a bit before I start yanking on stuff. Otherwise, all of the joints I tested seem fine and I don't feel like I need to go to town on him anyway since the soft goods are going to keep his posing fairly vanilla. They look terrific and I like how can basically store everything. Only nitpicks I have it I wish they added some paint to the gauntlets since they're mostly visible and a little bland and there's one spot of paint slop near the temple of the alt head. This guy is going to look great though with Krampus and, like Krampus, I don't think I'll have the heart to put him back in his box after the holidays pass.
Top

On the reciprocal, here's a fascinating magical Santa story. It was '84, I was 4, and I stayed over my godmother's for Christmas Eve. I was sent to bed earlier than I would've usually went, but I hear the "sleigh bells" sound in the middle of the night that wakes me up, so I get up, look out the window and see a flashing light traveling through the sky. Anyway, Christmas morning, I go downstairs to check out my gifts, and I received a Cabbage Patch. It had to be '84, because Cabbage Patch craze was in '83, and I remember wanting one because of that. Plus, my brother got one, and one of my cousins also had one all the same year. There's no way my family would've been able to secure 3 in '83, and it wasn't '85 because my baby sister wasn't there. But anyway, I'm wearing blue jeans, a white/navy striped t-shirt and I had some white and black striped Adidas, and I had a blue Member's Only jacket at that time. My bald-headed Cabbage Patch had on blue jeans, a white/navy striped t-shirt, a blue Member's Only-esque jacket, and the white generic sneakers it came with. Except for the jacket, since it was winter, the Cabbage Patch I received on Christmas had on the same outfit I wore for Christmas. I don't remember the shirt my brother had on, but both he and his Cabbage Patch had on overalls/jumpers. Close enough, right?

I told the story to kids at school for like 5 years straight, then I'd bring it up occasional years, for the "there's no Santa" rebuttal. Of course, there's logical explanations for all everything that they wouldn't think of at that time, but I prefer the fantastical Santa explanation. "I saw Santa as he was leaving from dropping off my Cabbage Patch doll with the same clothes I had on"
Top

I know he's wholesome and jolly, but I need some photos of him with guns or Mythic Legion'd out. C'mooon.
Top

Prophet924 wrote: ↑
Fri Dec 09, 2022 4:32 am
It’s not a story on when I stopped believing in Santa. I handled the reveal of Santa rather roughly for my oldest. He has a tremendous heart. He was heading to 7th grade with the wonder of Santa in his eyes. I decided to tell him “to spare him from the evil of Middle Schoolers” Watching that light extinguished was one of those heartbreaking moments as a parent I want a do over on. I wish I just let him discover it. The desire to protect really backfired here. I should have trusted him.

I know that it's easy to regret something like that, literally taking magic away from your kid, but I'm not sure you did the wrong thing there. 7th grade is way on the old side to still believe, and if the revelation had come from his peers, it would have been so much worse and so much more crushing to his spirit (and possibly followed the poor kid for years). Middle schoolers are brutal and merciless, and in general the meanest little pricks on the planet.
Top

On Instagram, someone asked the 4H about the Red Krampus. They responded "Red Krampus began shipping from retailers on Dec 5. Contact the retailer you got it from to inquire". Has anyone gotten a shipping notice about this figure? I ordered from BBTS, and haven't heard a peep.
Top

BBTS still has it listed as a featured preorder, so they haven't taken ownership of their stock yet. I wouldn't be too concerned as they seem to be one of the slowest, if not the slowest, to account for new stock.
Top 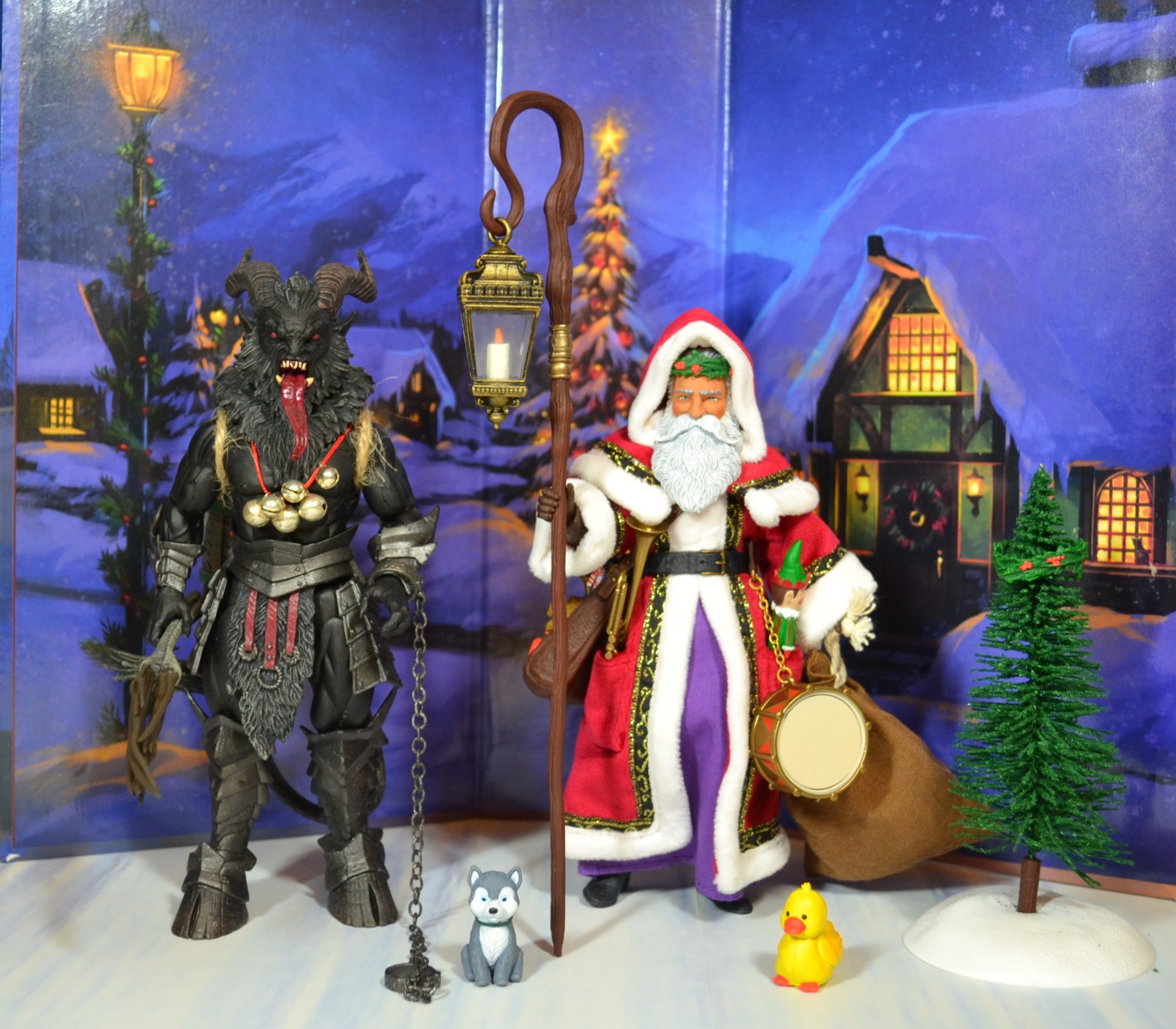 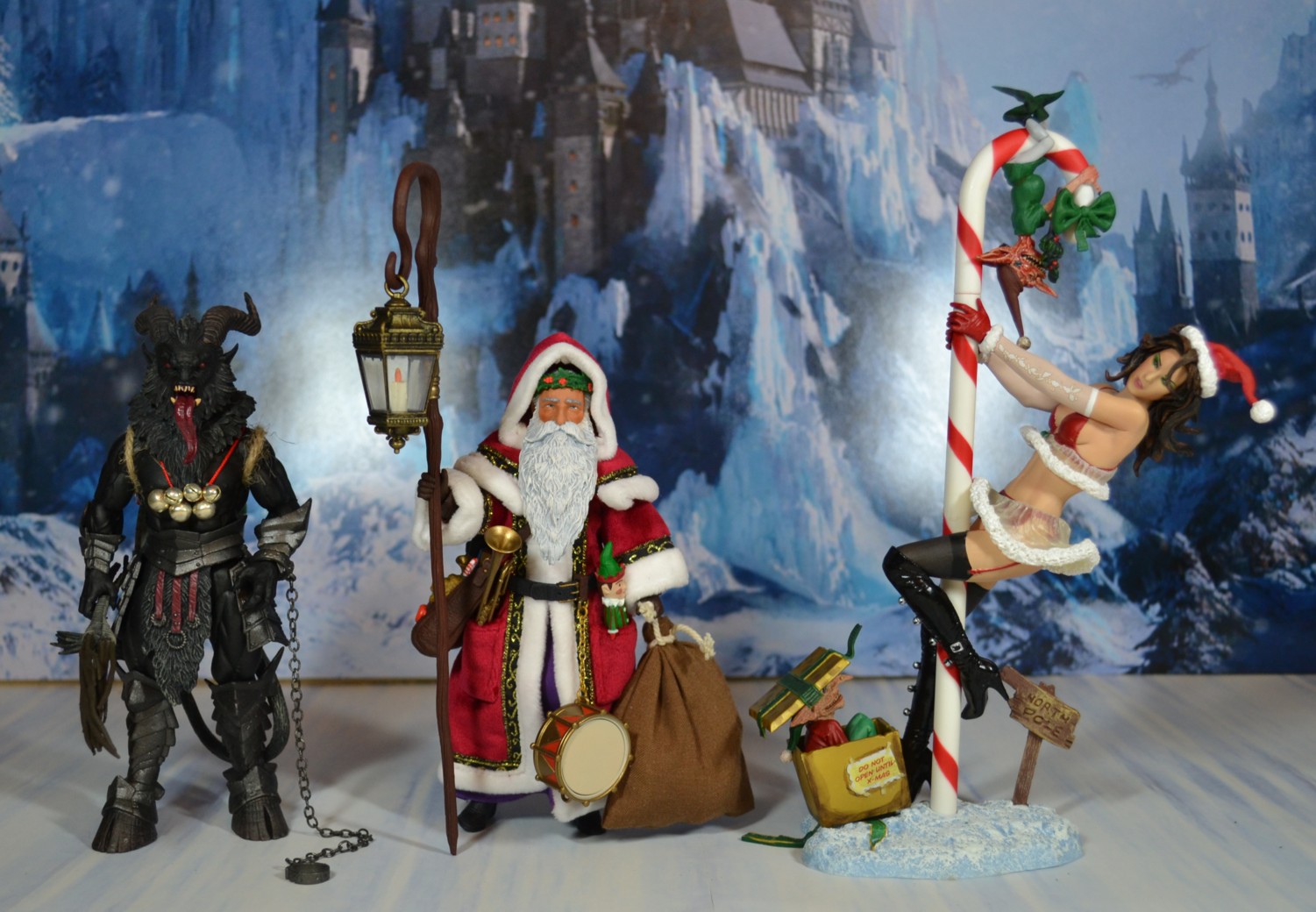 Damn, Santa is just amazing. The cloth is top quality, and the hood absolutely sets him off. Suckers gonna cost me some $$, because I'm gonna go to Hobby Lobby and such to build up a nice diorama for him. He may very well be up year-around.
Top
Post Reply
569 posts