YO JOE! Whether it's the 6-inch Classified Series or 3.75 from various years, let's talk G.I.Joe!
Post Reply
796 posts

This has been a fun journey as I was a bit disappointed with the price, but the size and features of the model they had on hand got me over that really quickly. The first two unlocks have been nice, added value if not absolutely essential, but this third unlock just makes me smile. Three figures does make the value for this more in line with what I was thinking, even though the price does make me hesitant to purchase multiple tanks. All the crazy weapons have me thinking about possibly backing another one so I can have one tricked out version with all the weapons and one more streamlined classic version. I'm super happy they made the female gunner and I hope this translates to a female infantry figure sooner rather than later.

For the final tier, I'm guessing it would be blast effects for all these missiles and cannons, but I could also see them doing the SMS missile launcher towable.
Top

Update (Happy 4th of July to my US friends):

I want the Purple one so bad! Wow! Cobra never skimped about bolting weapons to vehicles, but wow, this thing is getting armed!
Top

I've never had much of an interest in the GI Joe brand. I came into the world too old for the original 12" figures (which were pretty cool) but too old for the game-changing Real American Heroes (which looked like a lot of fun). For me it was Star Wars all the way and it still is.

That said, I just wanted to admit how envious I am regarding this dang HISS tank. I was lucky to be offered a HasLab Sail Barge and Razor Crest that had an impressive amount of detail and paint apps to show it off. However, they didn't light up! That's the one feature I wish they'd had, even as a stretch goal, and the HISS tank just freaking came with it standard! You lucky bastiches!

Anyway, I just wanted to stop in to say enjoy your tanks. It's a very cool looking toy, even from the uninitiated.

Same here. I love the look of this figure with the purple. It will definitely get my vote. I'm happy that all of the choices look really cool though. Whatever we get I'll be happy.

That being said, EVERYONE VOTE PURPLE!!!!!
Top

Same here. I love the look of this figure with the purple. It will definitely get my vote. I'm happy that all of the choices look really cool though. Whatever we get I'll be happy.

That being said, EVERYONE VOTE PURPLE!!!!!

Thirded. There’s no “bad” look in the voting pool, but the purple is by far my favorite.
Top

The red and black just ties everything together so much better than the purple though. 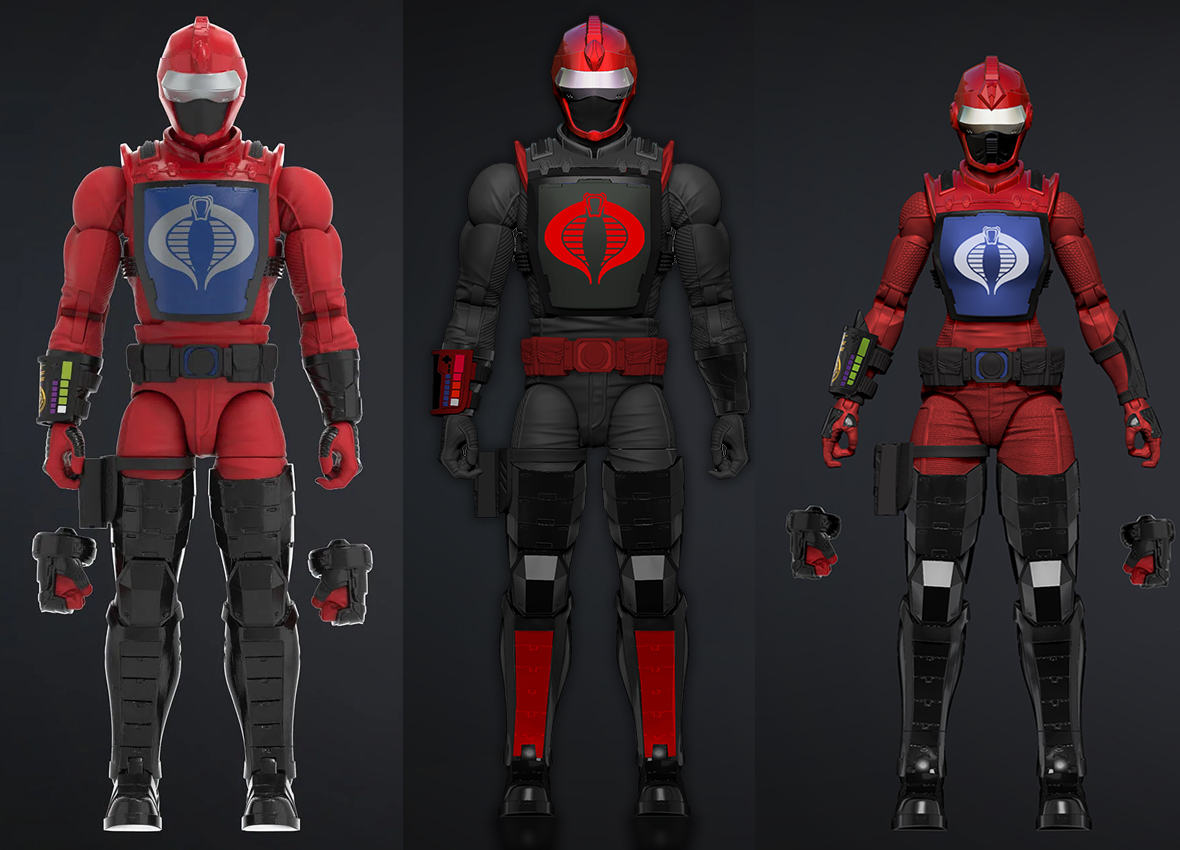 Honestly, beyond the helmets all being the same, that black-red one actually sticks out *more* to me. I think it’s the red emblem. Also I think I just associate silver cobra emblems with higher-ranking troops, so the tactician looks like a lower-level guy than they other two, which doesn’t seem to fit the “tactician” label.
Top

Buttmunch wrote: ↑
Tue Jul 05, 2022 12:23 am
The red and black just ties everything together so much better than the purple though.

If we get the purple one I'm using him as Dr. Mindbender's personal tactician/bodyguard though...

The black and red literally does nothing for me, because that color scheme made Destro and Baroness just stand out more as special/important.
Top

Back in the 80's, pretty sure my Tele-Viper of battlefield tactician on the living room floor. Kinda surprised it isn't getting its own sculpt, with plenty of gear and various computer equipment.
Top

I think I would rather have another Hiss Driver panit scheme figure but with a Trooper head and helmet (painted red of coures) to be the Hiss Tactician.
Top

Ax is to break up the dirt then u use the shovel to dig up a hole.
Top

Buttmunch wrote: ↑
Tue Jul 05, 2022 12:23 am
The red and black just ties everything together so much better than the purple though.

That is my favourite combo too.

I think the purple would go well with he eventual Techno-Vipers so I wouldn't be surprised to see it get a release in the future if it isn't successful this time around.
Top


13,363 / 8,000 (+393) It is starting to slow down, which was to be expected. At the current rate I don't think it will hit the third tier today, but probably tomorrow. Unlocking all the tiers in a week would have been great, but I don't see that happening. Hopefully once tier 3 is hit they will show tier 4 quickly and not make us wait.