YO JOE! Whether it's the 6-inch Classified Series or 3.75 from various years, let's talk G.I.Joe!
Post Reply
812 posts

Not until after the campaign ends. Hisstank is doing an unofficial poll on their site and black with red is winning far ahead of any others.
Top

This is my first time supporting a Haslab project and I don’t recall hearing a timeframe on when we can expect this. What is the typical timeframe that we can expect for this? Thank you

CO_Alex wrote: ↑
Sun Jul 03, 2022 3:29 am
This is my first time supporting a Haslab project and I don’t recall hearing a timeframe on when we can expect this. What is the typical timeframe that we can expect for this? Thank you

Although nearly all Haslabs seems to run behind schedule so I would be surprised if it was winter or spring of 2024.
Top

I am guessing we might see a daily average of between 75-125 backers after the long weekend, and until we unlock all the tiers. Once we unlock the last tier it will probably drop even more until the final few days. Unless something drastic happens I would guess, right now, that the final number will be in the mid 20,000s when all is said and done.

Just keep buying more into it unlocks the next tier and be grateful for the extra three pieces of plastic it gives you.
Top

New tier! Now that is a sweet unlockable.

This looks so [email protected]$$! 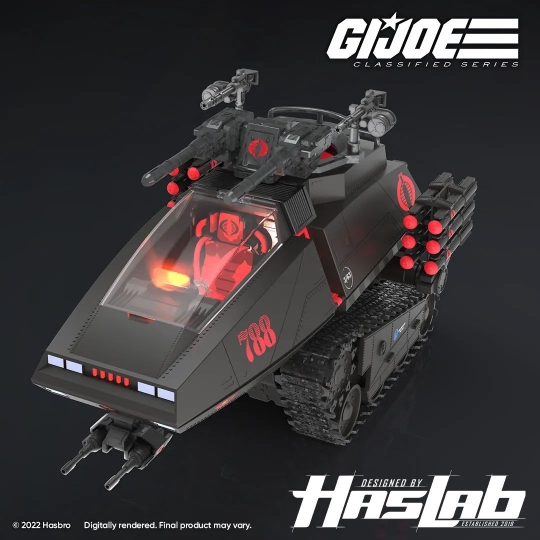 Welp, I had planned on using the tactician as gunner but this is much better.
Top

I keep waffling but Tier 3 is really pushing me. Is this gunner our first female Cobra trooper!?!
As for the tactician, red/black is my preference..it coordinates with the tank, plus I love that color scheme anyway.

I hadn't even realized it was female, but no there is a female blue ninja trooper already up for pre order.
Top

Tier 3 is a fantastic tier! Gives us approximately $75 in figure value now. Making the Hiss and all of its accessories right about $225 now, which is pretty close to that $200 mark a lot of people wanted it at. I’m surprised by the female gunner. I had hoped we’d get a gunner somehow so as tier three is really nice. Much better than tier 2. I’m guessing tier 4 will be the blast effects for all of the weapons now.

And the nice thing is the driver and gunner appear to have identical uniforms so you could even swap a gunner and driver positions for a little more variety if you have multiple Hisstanks.
Top

This latest upgrade is great! Another cool figure and a bunch more weapons. I think this Haslab is doing a really nice job on the tiers.