YO JOE! Whether it's the 6-inch Classified Series or 3.75 from various years, let's talk G.I.Joe!
Post Reply
820 posts

I’d be shocked if they priced it under the 3.75” vehicle. If they price it under I could see those fans flipping out thinking they have been ripped off.

I could see them doing the Hiss Pilot Cobra Commander from 2012 as a stretch goal.
Top

I agree on the price. I've been thinking at least $325, mostly because I thought the Skystriker was overpriced.
Top

I agree with most here that its probably going to be a Hiss Tank, possibly a Sky Striker. But I think they could also create a good project out of making multiple mid size vehicles or equipment like the MASS Device or Weather Dominator, Cobra Sentinel or SNAKE armor, Fire Bat or Trouble Bubble, The Tripple T or The Snow Cat with pilots as the teirs or maybe slightly larger vehicles at the larger teirs. As most of you have said, a good Hiss can be had for less than $200 but Haslabs are about bigger complex projects so I could see one project stuffed with a lot things like the Skystriker project was as a possiblity, although not as likely as stand alone Hiss.
Top

Roufuss wrote: ↑
Tue Jun 28, 2022 3:08 am
I’d be shocked if they priced it under the 3.75” vehicle. If they price it under I could see those fans flipping out thinking they have been ripped off.

I could see them doing the Hiss Pilot Cobra Commander from 2012 as a stretch goal.

You guys prefer the Blue or Black HISS?

Looks like the Hiss Tank popped up briefly on Pulse today. 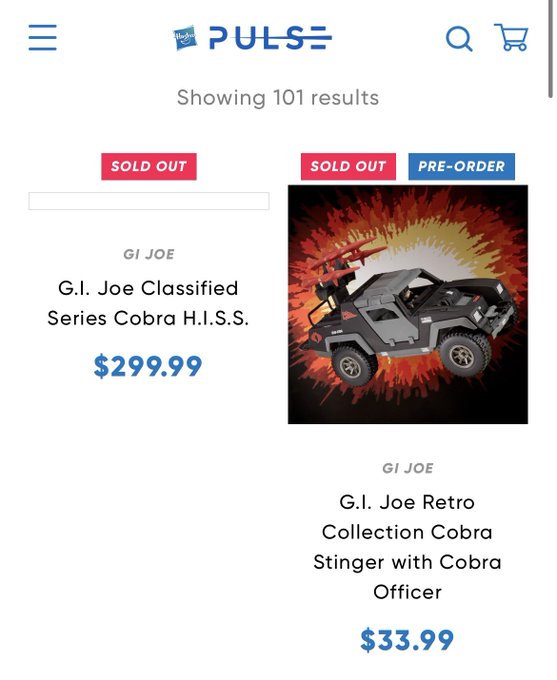 I wouldn't worry too much about that. It's not even supposed to be listed yet.
Top

I knew it would be $300 so there isn't any sticker shock for me. Hopefully it has a lot of cool tiers.

Well Hasbro saw what happened with Mattel and Wun-Dar, and said "Hold my beer."

You want to sell out in under 3 minutes? How about we pre-sell out so we cut out the complaining? BOOM!!!! Now where's my beer?

I'd say someone at Hasbro Pulse is getting a call about website maintenance practices, and expectations about duty of care. First the "Selfie Series" leak, and now the Haslab HISS leak a day early. Someone isn't paying close enough attention to what they are doing when working on the site.

Nebraska wrote: I knew it would be $300 so there isn't any sticker shock for me. Hopefully it has a lot of cool tiers.

). Seriously though, at least it stayed at $300 so that is something considering the current trend of price increase, upon price increase. I could see them trying to justify $350, or more.

Now what shall we see for figures, extras, and tiers? The HISS Driver is a given right? Maybe Rip-It as an easy tier repaint from the HISS Driver? Not sure how I feel about a blue Baroness as Roufuss suggested. I would prefer they go the route they did with the Skystriker. By that I mean keep the repaints to characters not made yet, or ever, as much as possible. So while a blue Baroness would fit in as a repaint not made yet, she has been done 3 times now in Classified (with Coil, movie, retro). So I wouldn't be as keen on her, but of course I would still want her. Maybe her and HISS Driver could be included in the base offering? Outside of figures I don't know what they could include as extras, but hopefully some kind of support vehicle/platform like they did with the Skystriker.

Now I have to gird the loins for the sticker shock after all is said and done. If I am calculating it right, for me in Ontario, Canada it will be:

Let's hope it really does pack in the extras, like the Skystriker, to make it seem more worthwhile.

I guess we'll find out in less than 24 hours.
Top

I'm excited for this, but the tiers are going to make or break it for me. I'm hoping for some great add-ons.
Top

Money's just way too tight for me this summer. I'd love to own a Classified Hiss Tank but it'd have to be well below $200 for it to be a price I could squeeze in. Ah well, we can't own everything we want.
Top

Shooo. I'm not saying that's not a justified price, but it's probably one I can't jump in on. We'll see what the tiers are. If it turns into something I can flip later and keep an exclusive figure or two then I might bite. I doubt it's ever going to be something I can keep though, for money and space reasons.
Top

Not surprised on the choice for a Haslab or the price, I wish it could be cheaper because I want to pick up a few of these but wouldn’t want a lesser version either, so I guess it has to be around this range. It does make me a bit nervous for future Haslabs because the price is only going up from here, and I would like to see them branch out to some more unique vehicles. It does feel like a loss to not be able to make multiple versions of the Hiss, unless they find some way to make an outer shell that can be swapped out with another, but that seems like it’s begging for breakage. As for tiers, the Hiss Driver or Rip It seem obvious, I thought maybe a suit body with alternate Tomax and Xamot heads would be cool, so people who buy multiples would be get more out of doing so but it’s not so necessary the casuals would get upset. Billy crossed my mind also.
Top
Post Reply
820 posts