YO JOE! Whether it's the 6-inch Classified Series or 3.75 from various years, let's talk G.I.Joe!
Post Reply
43 posts

We don't have Flash yet, silly rabbit.
Top

not for my favorite figure though, he gets his own shelf:

I actually don't have any Classified displayed at home. 4" stuff and Sideshow 12", yes. The only Classified I have displayed is at work: 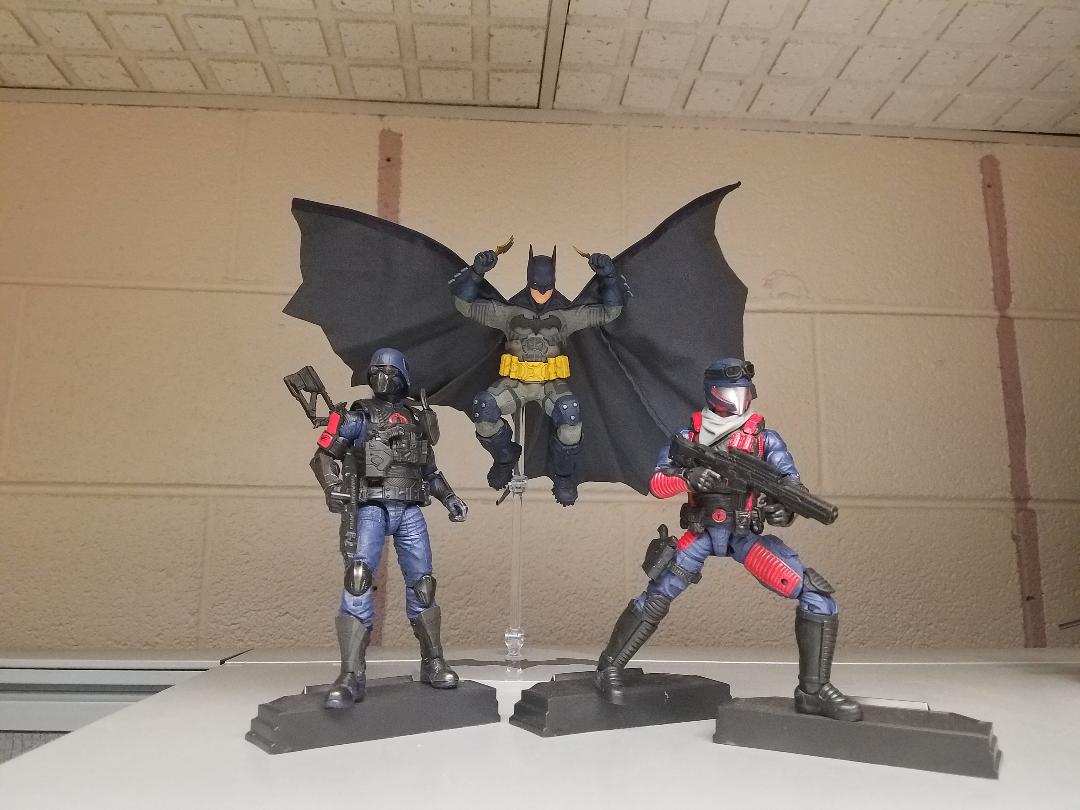 
OK, what's the recipe for that amazing Slaughter?

Awesome work. Thanks for sharing your creations. I was going to ask more questions but I found your video for him. I salute you sir.

Thank you very much

Awesome work. Thanks for sharing your creations. I was going to ask more questions but I found your video for him. I salute you sir.

Thank you very much

That is an amazing figure. Nice to know that it is 100% Hasbro parts with custom paint.

Now if only they would emulate your work.

Threw Arctic Stormy behind Akiko with the red ninjas as a different Arashikage clan member. I'll come up with a name later if there isn't an existing character who'd fit (very excited for upcoming Kamakura!).

Got another BAT, and gave the damaged parts to Timber.

And my Doctor Mindbender body is awaiting the official head & neck, haha.

Still need to alter Destro to my liking, but really don't want to start cutting & painting (or paint-removing) on my only copy...

Still need to come up with a name for PDD as a unique character.

Bro-adblock is Heavy Duty until we get an actual & better HD.

Comic ML Shang Chi (behind actual Roadblock - still really want the Amazon head, though) is Quick Kick, obviously, until we get an actual & better QK.

Cobra Sergeant is CI with Beachhead's beret, AI scarf, and vest cut down to just belt/hip holster. Other CI Cobra (goggles, between Zartan & BAT) has the armband turned upside down as another rank. Upcoming Officer will make a third.

Viper goggles fell down in the back of the shelf.
Top

Finally got my Joe's all opened and out after finishing this wall setup. 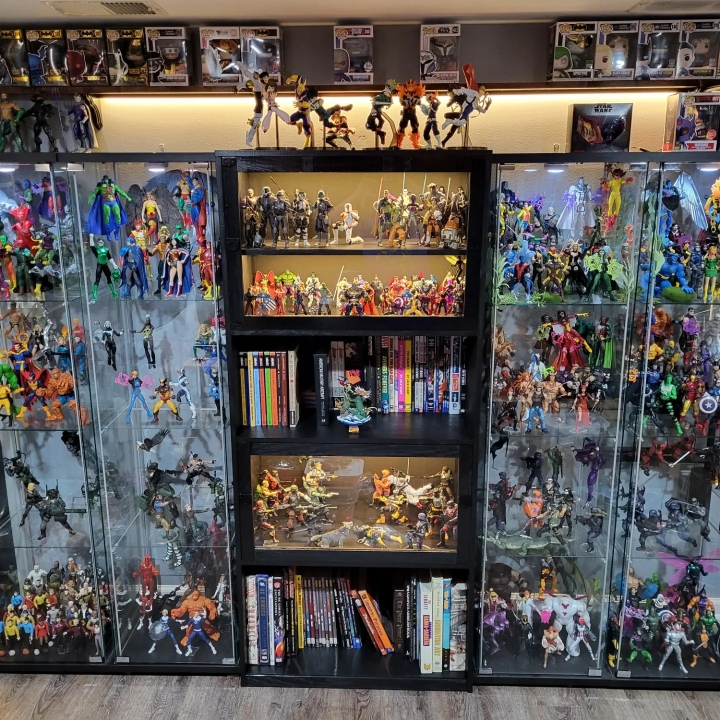 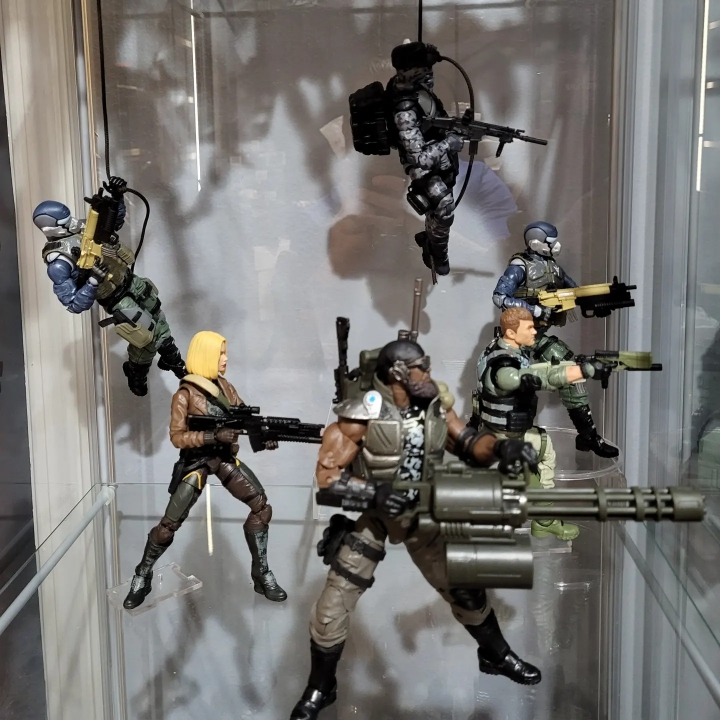 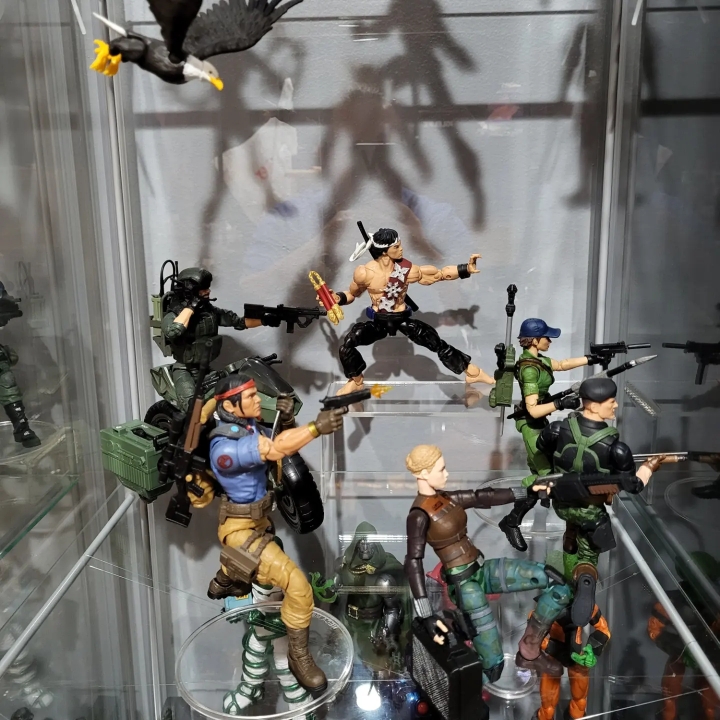 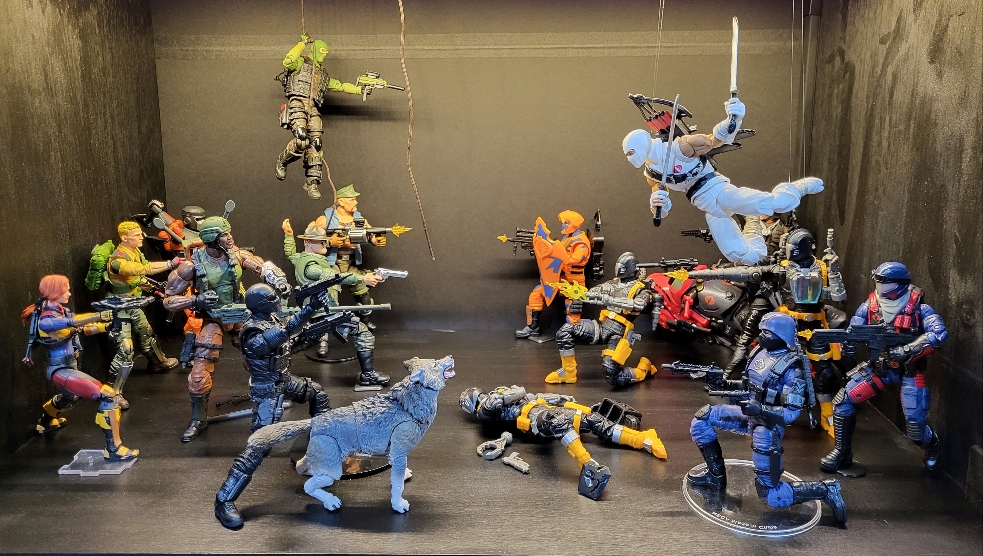 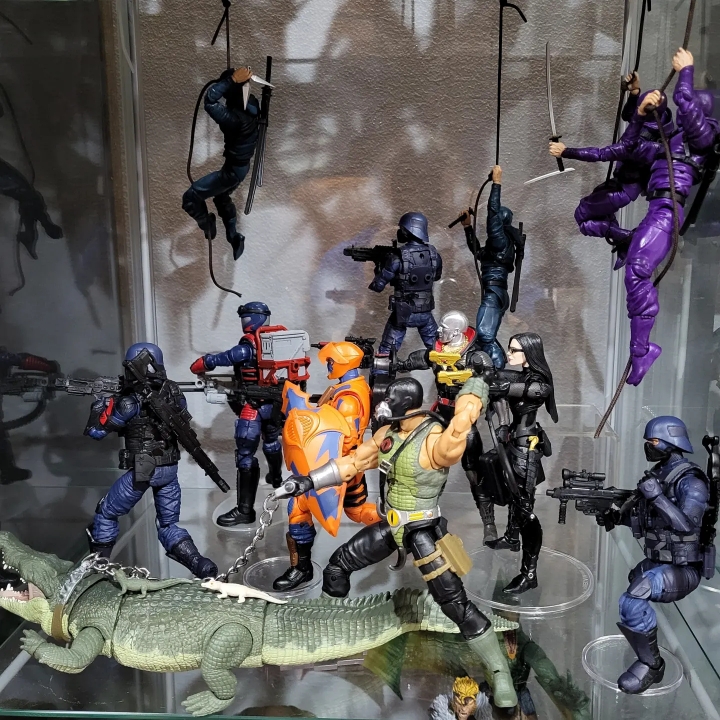 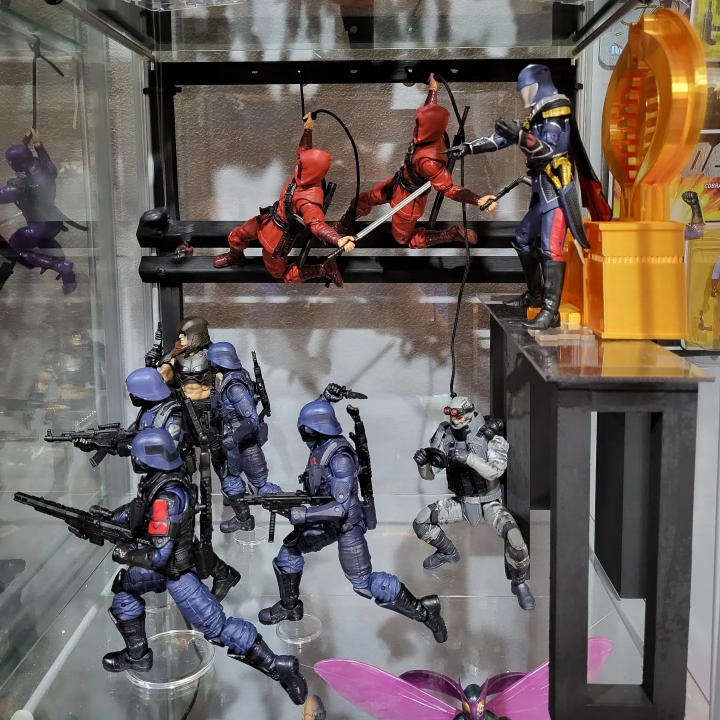 Sent from my SM-G990U using Tapatalk

Glorious!
...and now I need to up my display game.
Top

That is BREATHTAKING.
Top 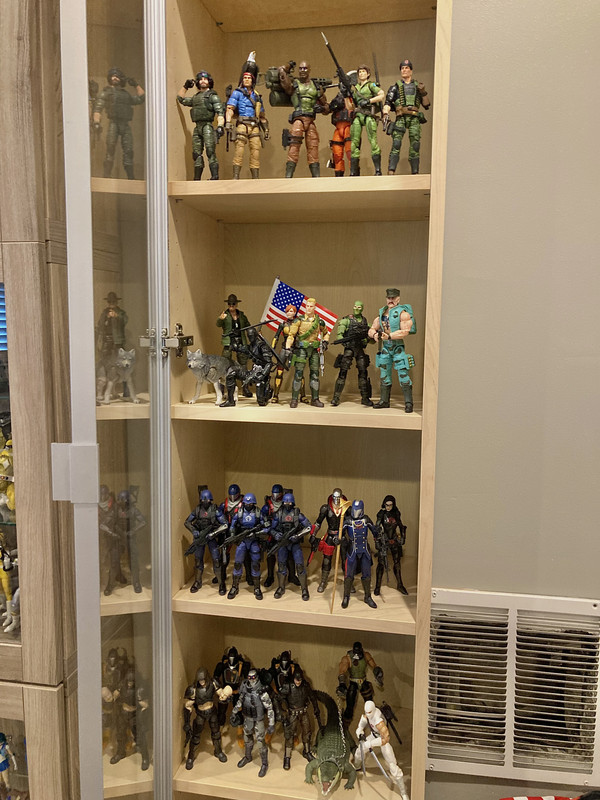 Recently moved them over to where my TMNT once sat and gave the Joes their own shelf tower. There’s another level above and below what you can see here and with some risers, this should be enough space for everyone once things really get rolling.
Top 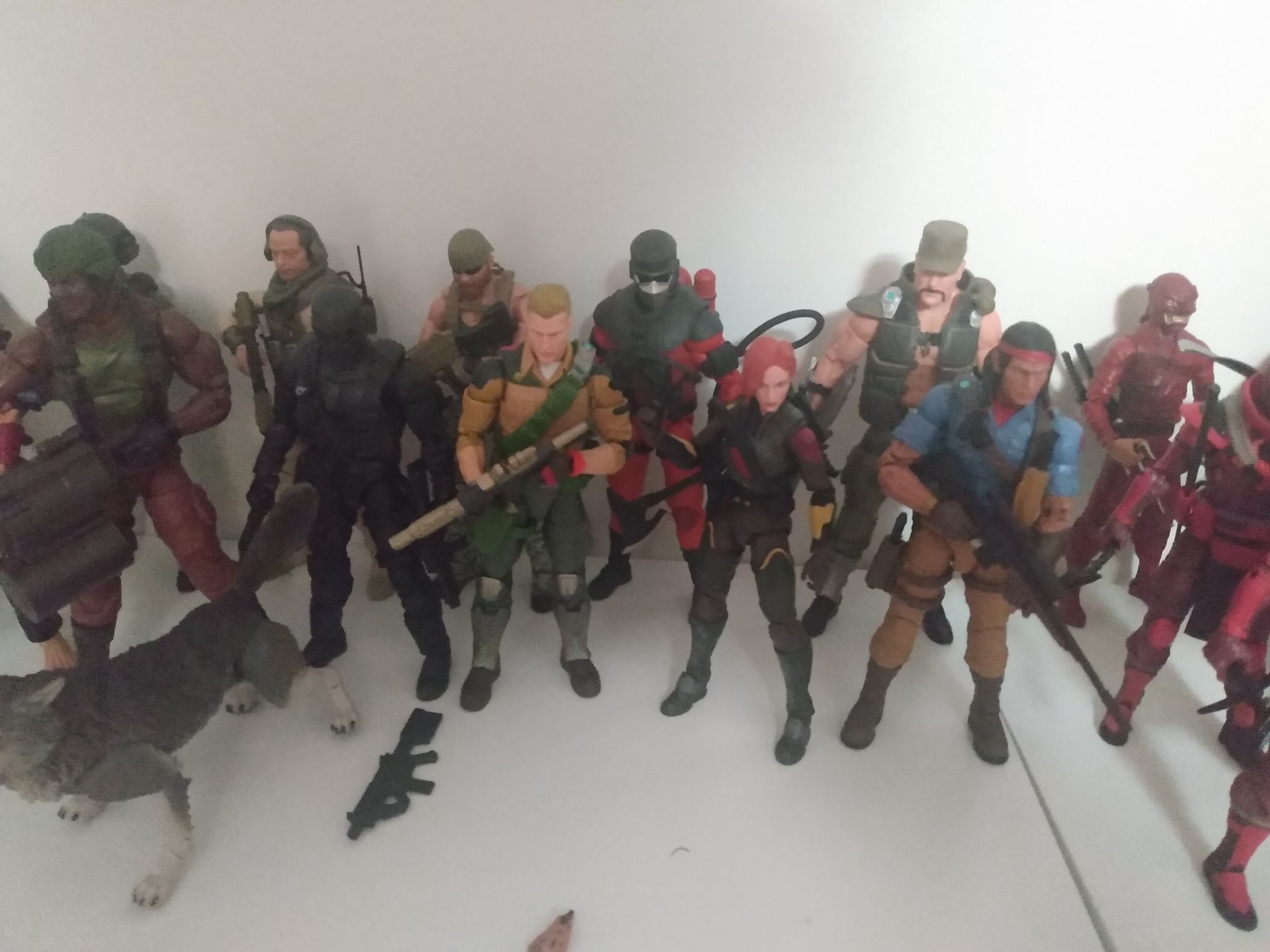 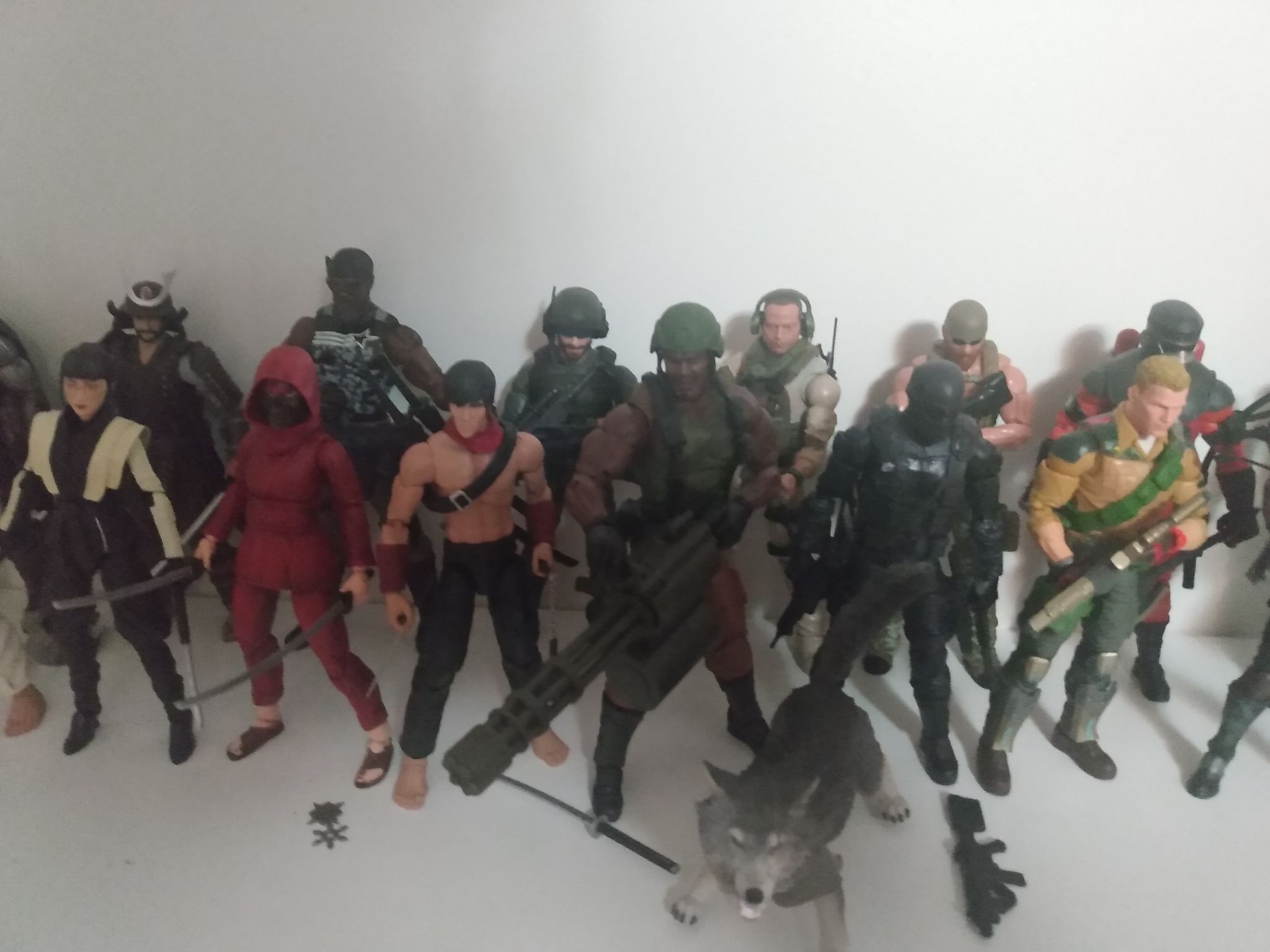 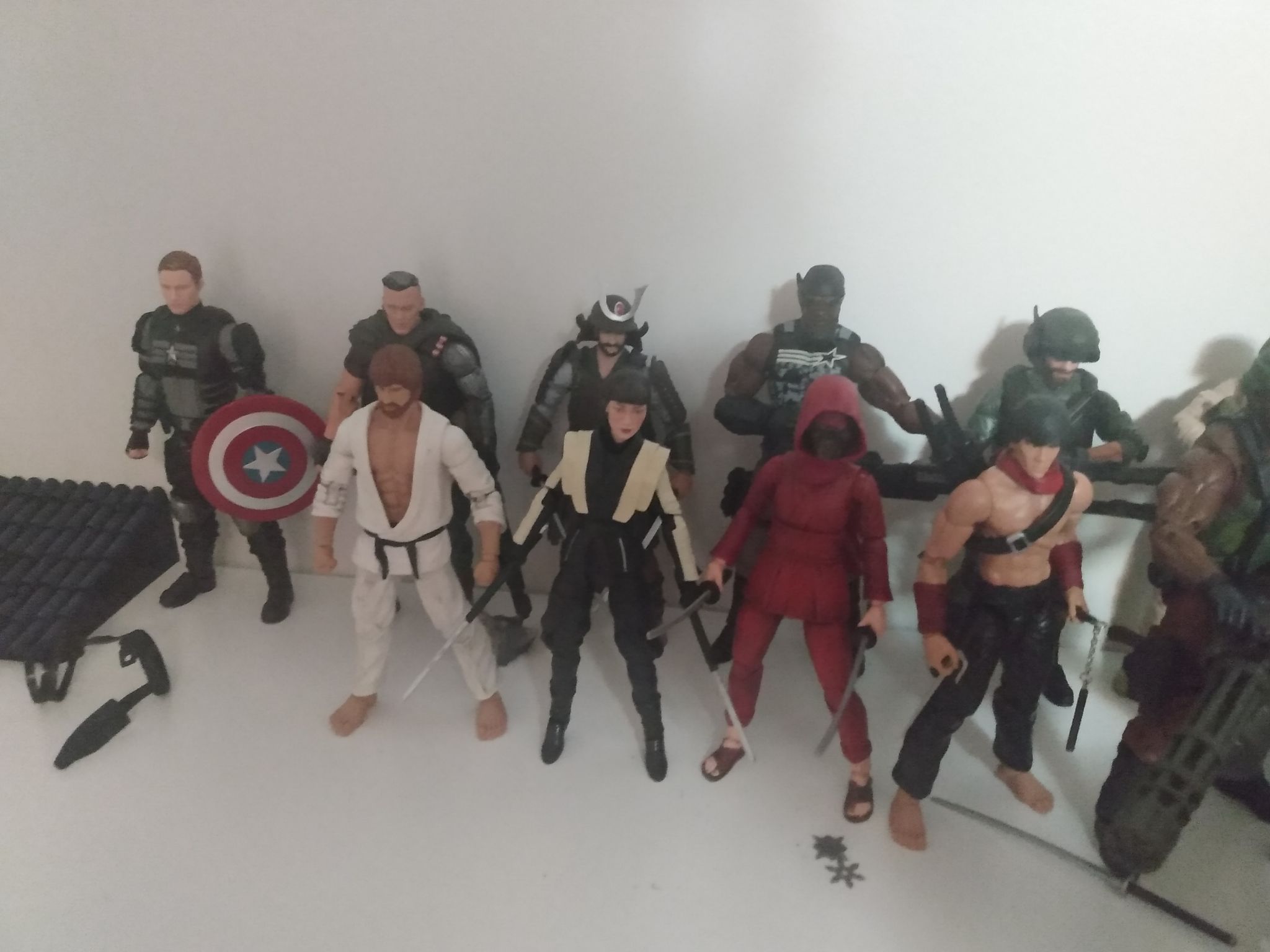 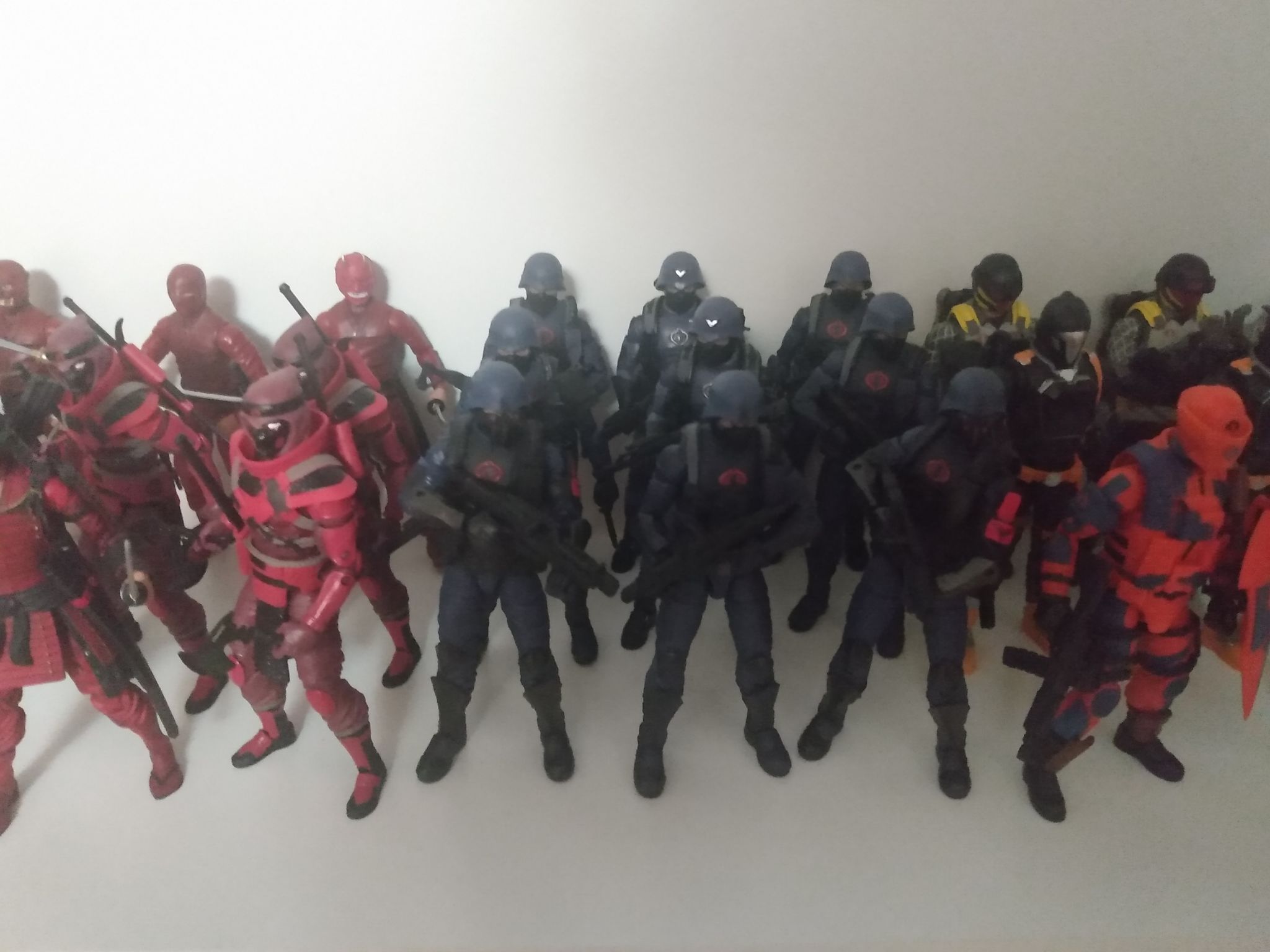 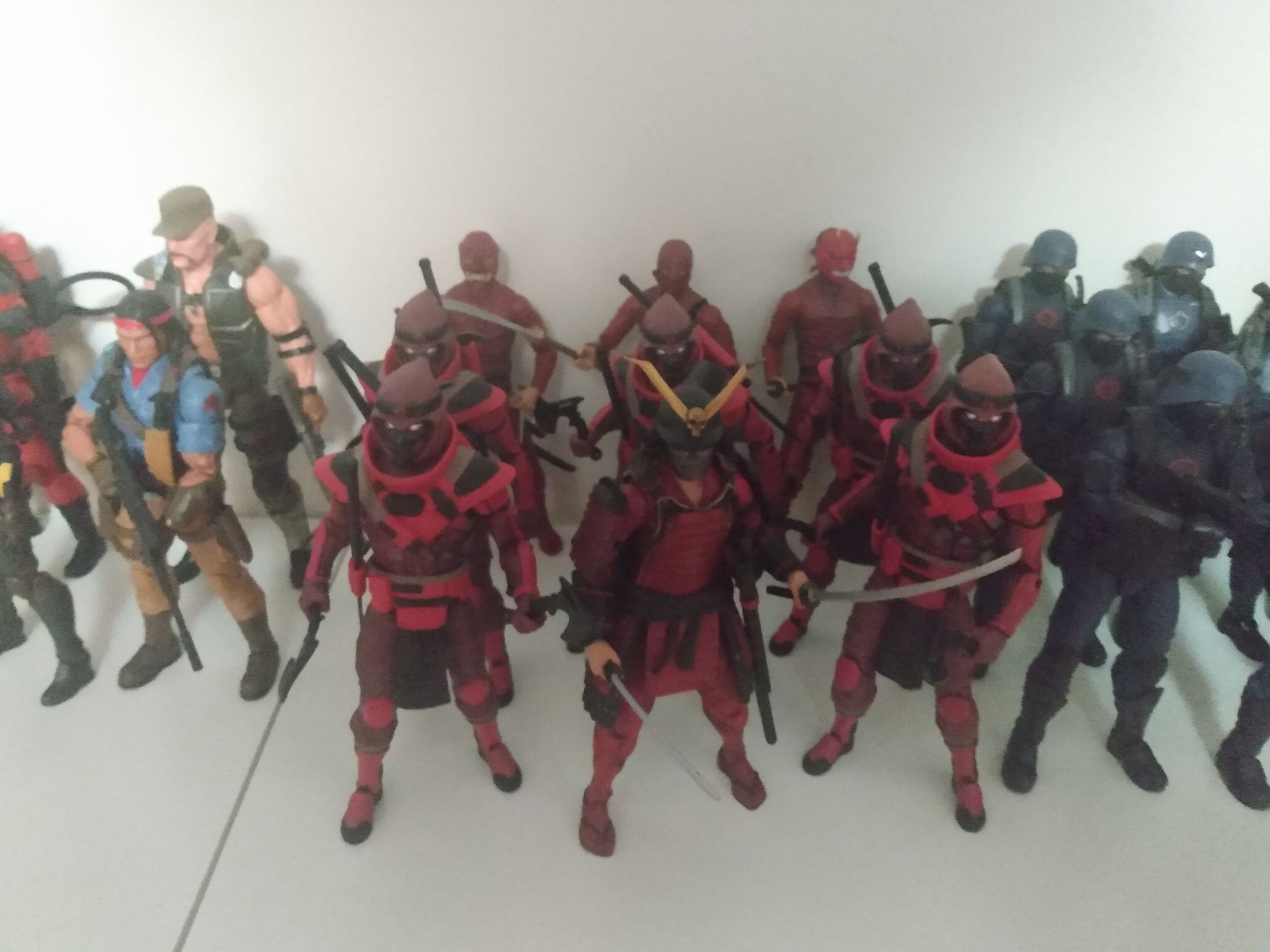 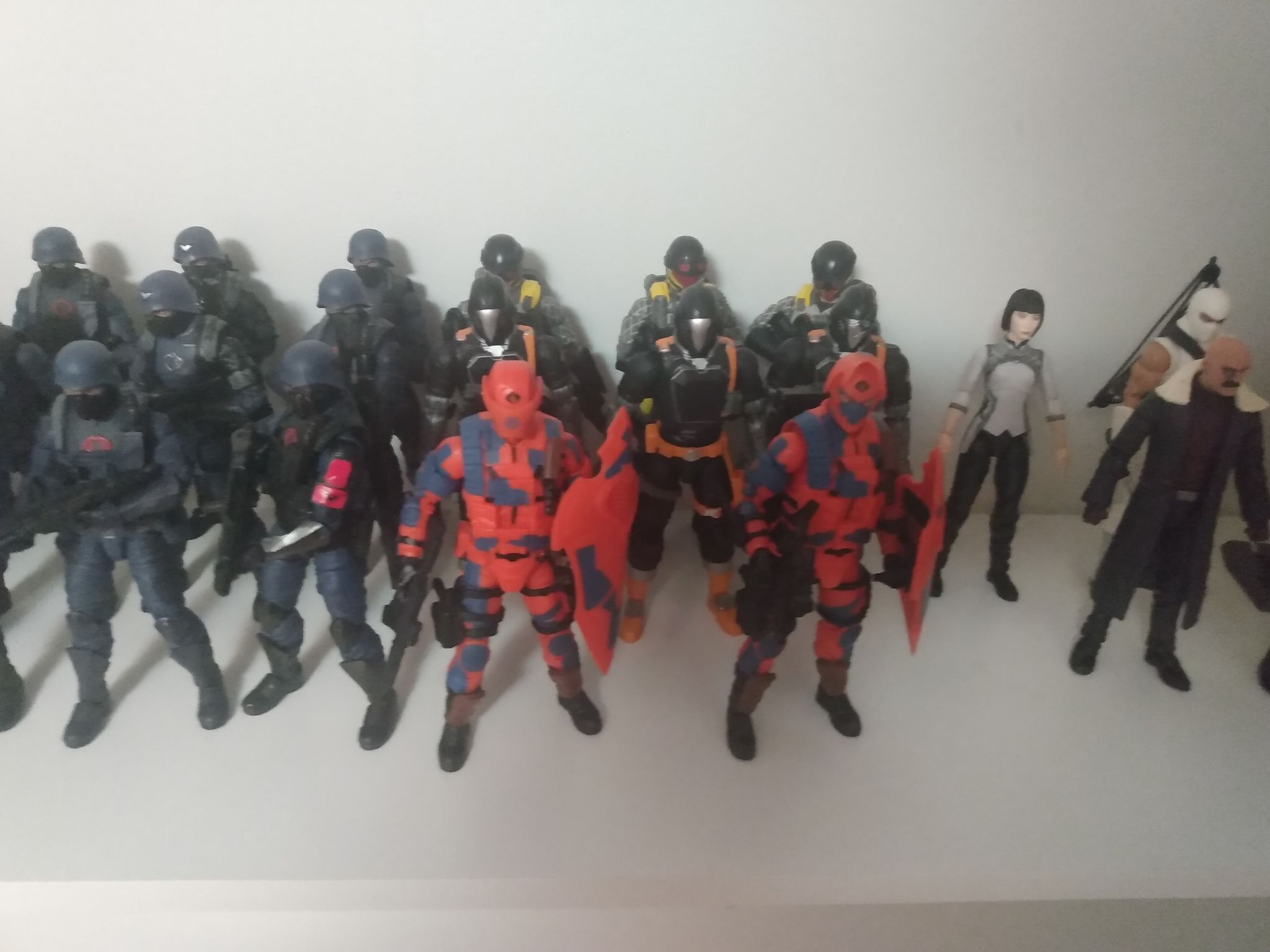 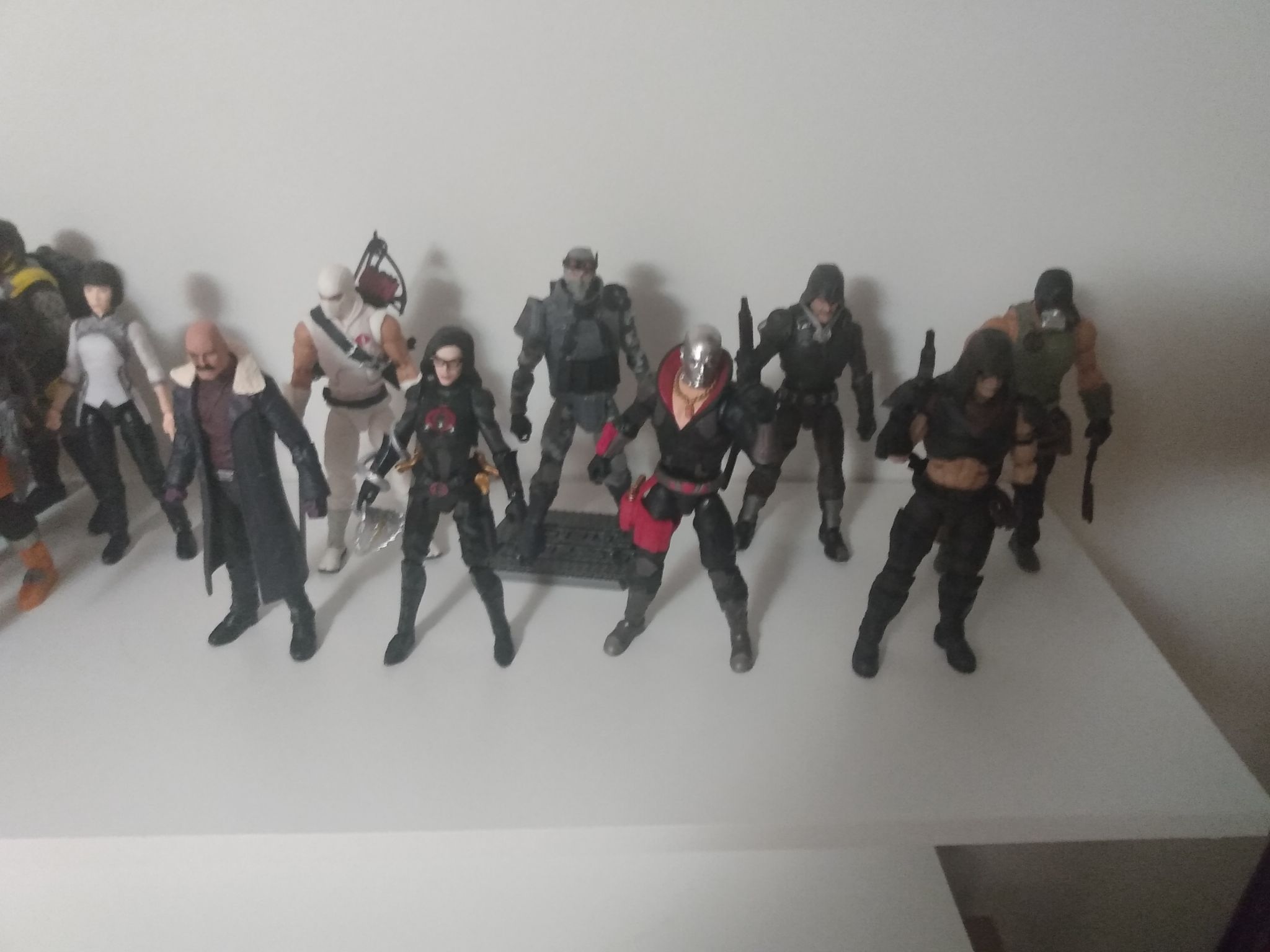 Spread my Joe shelf out to shelves. 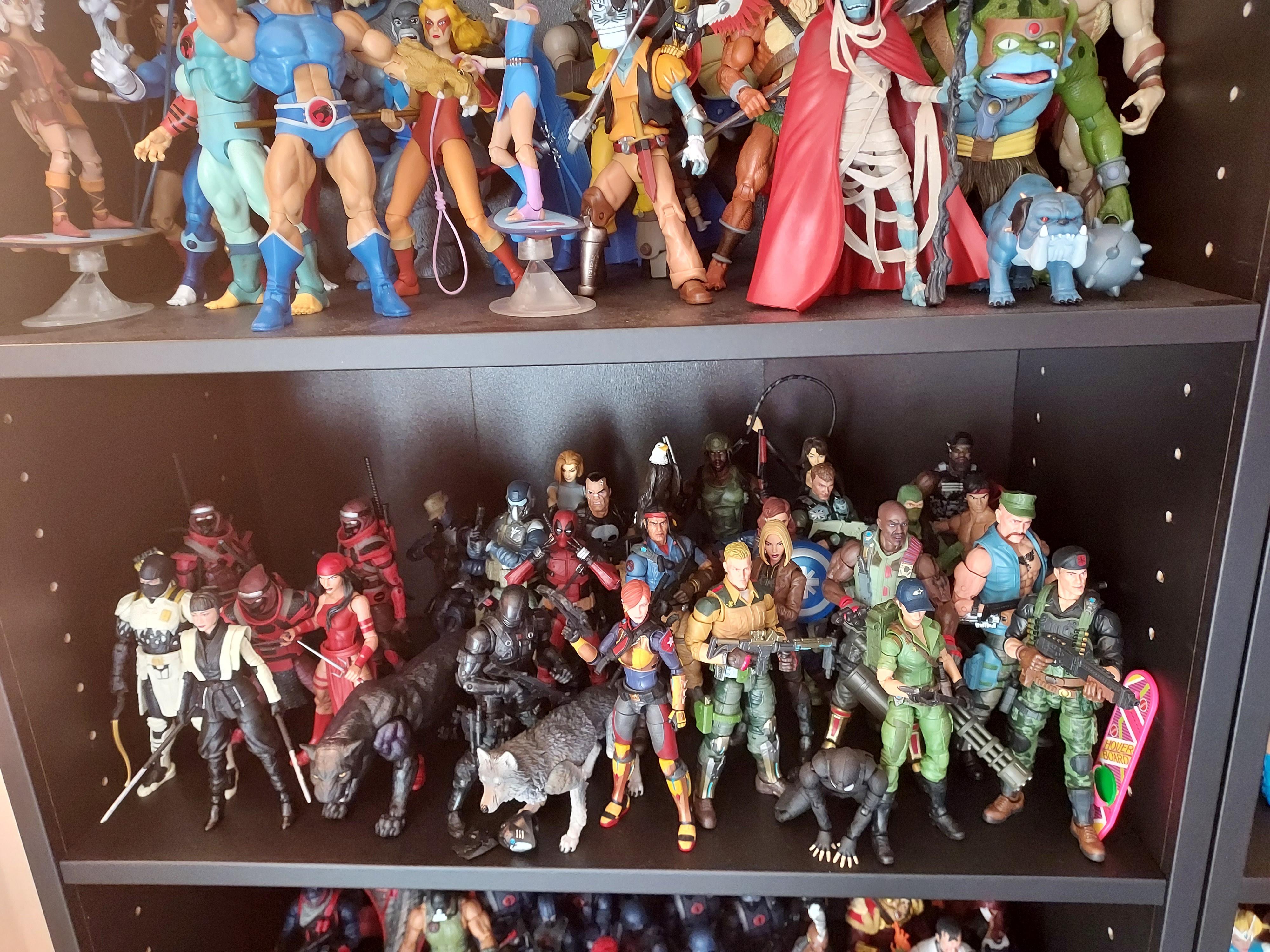 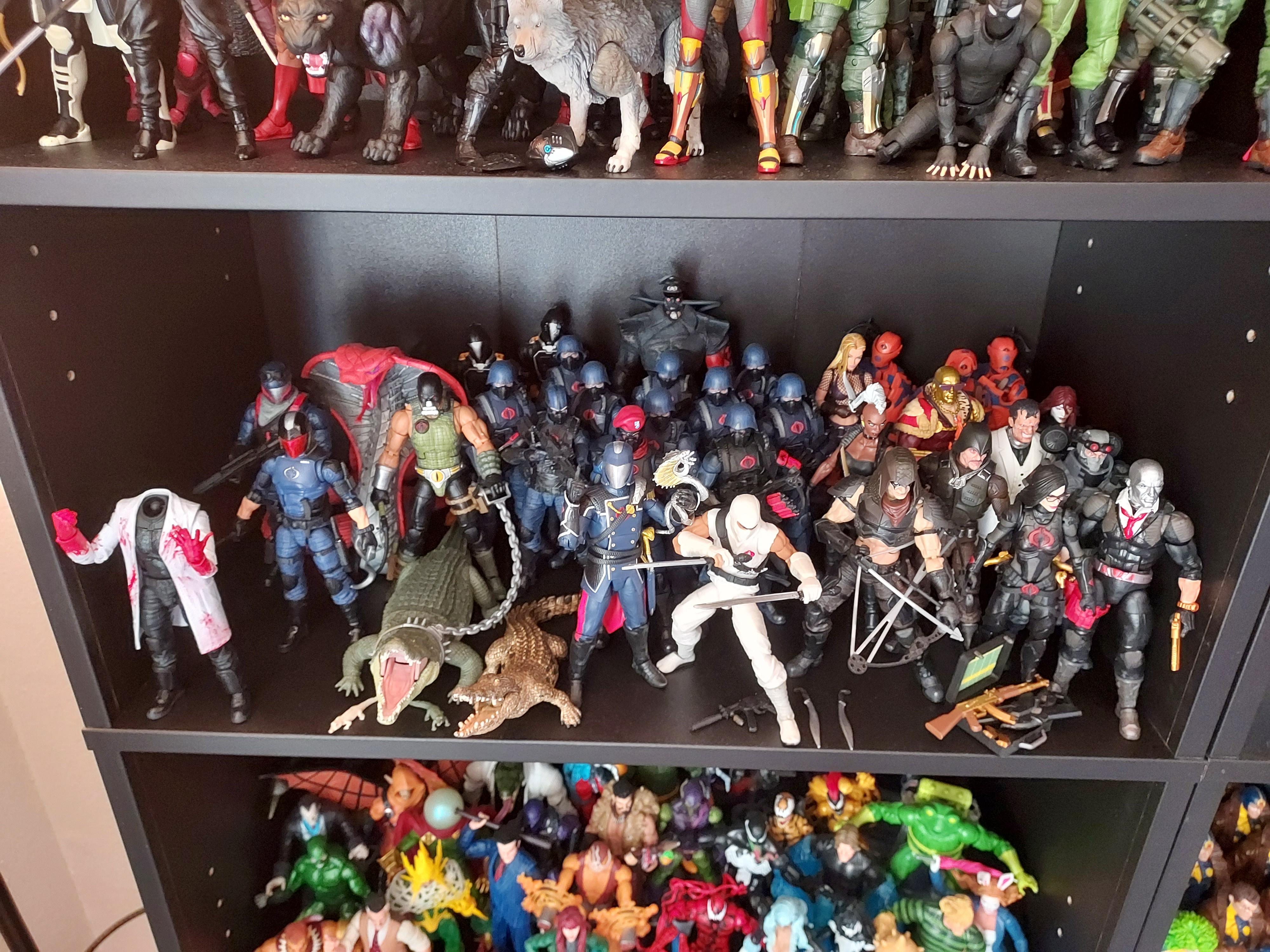 There's my Mindbender, still waiting for a head/neck.

Warning! FRAT! :
Calling the Red Ninjas neutral Arashikage (painted silver on the headbands over the Cobra sigil), not Cobra. Cobra will get the blue ones, at least. Really hoping they do a matching red of the blue female ninja, though. Arctic SS is now Ginzu. Elektra felt like she fit, so I tossed her in to fill some space. The Clan has Guenhwyvar.

Joes start with Valaverse Shockwave behind kitty. Still have to paint his hat, though. Valaverse Steel Brigade, Abbey Chase, Punisher, Deadpool, Cover Girl (unsure what to do once the official comes out, as this recipe was so awesome), calling Peggy "Captain Britain" here (just because I thought What If should've called her that, lol), Valaverse Condor next to her because also British, Sydney Savage behind him, (no idea what to call Amazon Roadblock with Wave 1's head), was calling CI RB "Heavy Duty," now not sure, Shang Chi is Quick Kick, Gung Ho has the Valaverse kit, Night Monkey, and didn't know where else to put the Mattel 1/12 Hoverboard, lol.

Mindbender got some blood stains once I got another Reed coat/arms (hands are Anniv. Cap, unaltered) - the red isn't that pink in person. Custom Interrogator uses the Officer body & most accessories (closer pics coming to my custom thread soonish). Some Schleich or Papo croc that I got to stand in as a bigger inaccurate helmetless Lokigator, lol. Three CI Cobras are directly behind CC, all wearing their goggles. Red beret is the commanding officer, guy with the upside down armband is a rank under him, helmetless one is a sniper. Major Maxim behind everyone - really wanna turn his Hammer sigil into a Cobra, but a sticker won't look good IMO, and paint will look worse (I have super shaky hands). Natalia Kassle by the AVs. Storm as currently unnamed Dreadnok. Zartan has Old Man Hawkeye's bow. PDD is Destro's currently unnamed brother. Jigsaw, Typhoid Mary. Finally painted my custom Destro's watch gold to match his gold Valaverse weapons. Machetes & SMG are unnamed Crimson Guard female custom I'm working on with movie Baroness parts on the Fortnite red cat chick body, just trying to glue the boot pegs on to retain boot swivel (Baroness feet on the existing legs looked AWFUL, IMO, and the cat feet just didn't work for me, lol).
Top
Post Reply
43 posts