Still haven't got my Gamestop Flint + Lady Jaye in yet, so I called the shop and dude told me that no Gamestops have recieved the figures for pre-orders at all.

In this one instance I'm thankful that my local retailers are absolute garbage at stocking toys, because at least I'm not tempted to buy these Joes off the shelf and cancel my pre-orders. Definitely an exercise in patience.
Top

Still have one more from Pulse on the way (supposedly due tomorrow, but Zartan is still supposed to be due today, on the truck in the area, but didn't show up with the two Cobras that just got delivered), and one in my Pile of Loot that I just hit "ship" on. 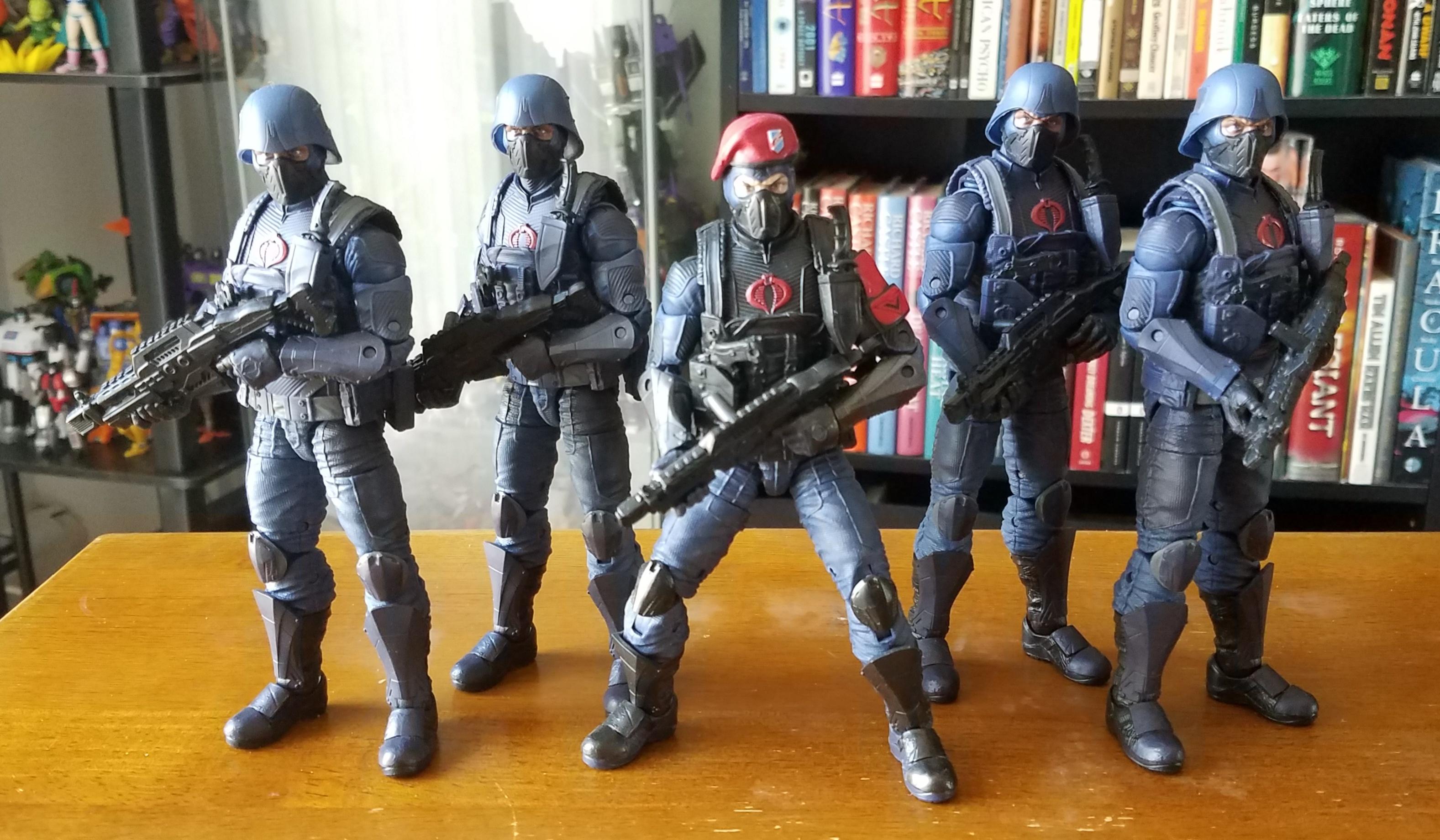 I'm done. I only wanted 5 initially, and while it was nice getting two sooner from Walmart.com for MSRP, I'm good with 7. 6 troops, and a squad leader is good. 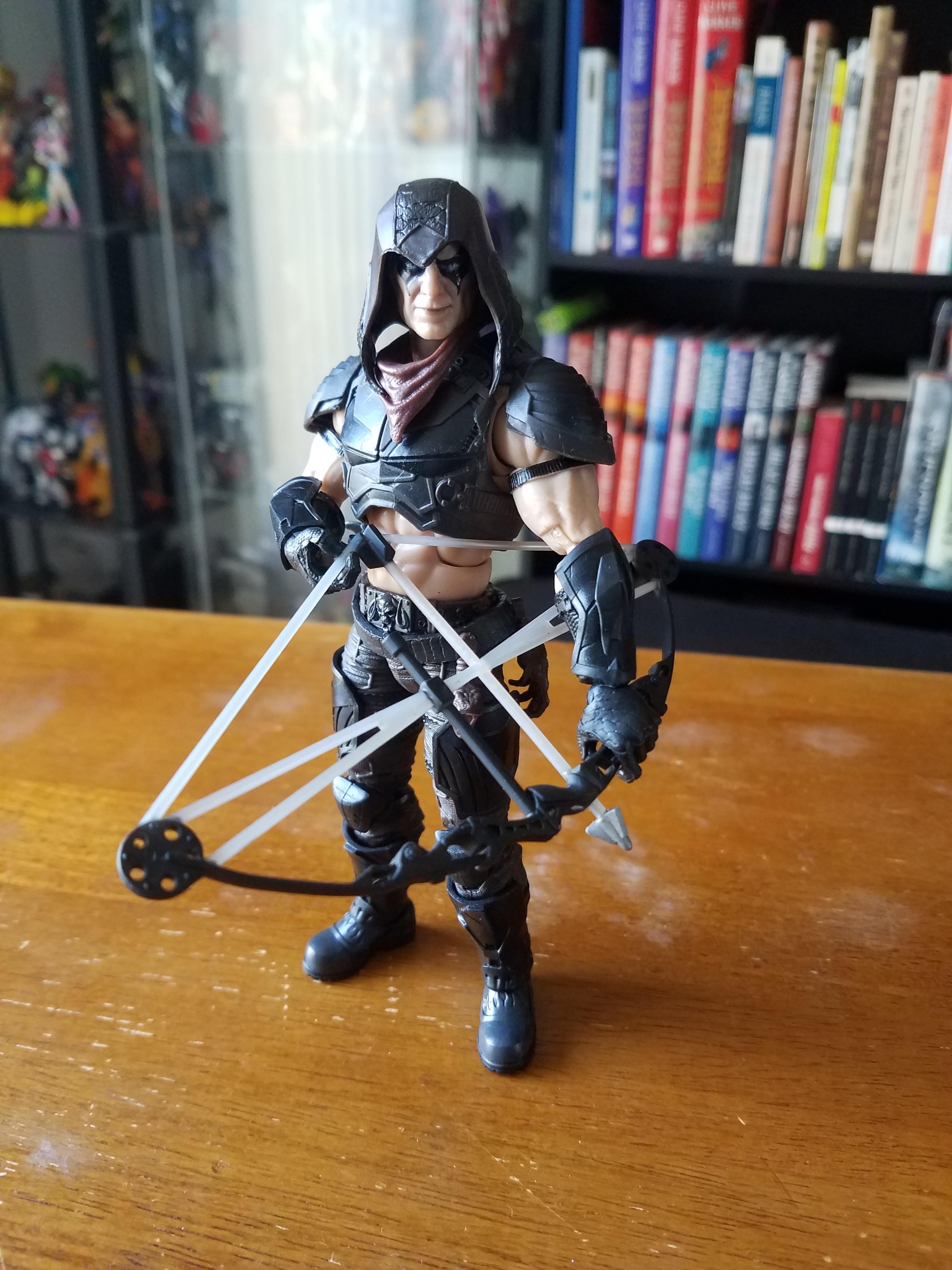 Got my Zartan today from Pulse.

He lives up to my expectations. Now I really want the main trio of Dreadnoks to go with him.

His joints were super tight though. The hips especially bothered me, but I gave him a warm dunk and got em going. Hopefully with no issues in the future.

His elbows felt tight too. Really wasn’t taking a chance after Lady Jaye. One of his knee joints is a little deformed, but still seems to mostly function right.
Top

But how will he holster it?!?

I suspect it'd still plug into the vest with only half the peg. They really are long pegs.

I'm not going to experiment until I get my infantry, though.
Top

FuzzyBlueDemon wrote: ↑
Thu May 06, 2021 1:48 am
Articulated Icons white ninja with the bare arms from the arms pack & a Cobra decal. In not saying this in a snarky way, I promise, but I'm honestly surprised someone on the Fwoosh has made it this long without seeing this one!

Appreciate the info. I've seen the line before and was interested but all I ever saw in stock was the multi colored ones as white, black and red always seemed to be sold out when there are sales. Plus given the distance in the pic and that I didn't see the green eyes, I thought it might be another series from someone else. The green eyes and the fact that the colors I wanted always sold out so fast made me forget about the line unless I'd see them in someone's photographic scenes. Where exactly does someone get the bare arms, or was that sold previously in the line?

Given Hasbro's route, this may be the most likely way of getting a version of StormShadow I actually want. Thanks for the info!
Top 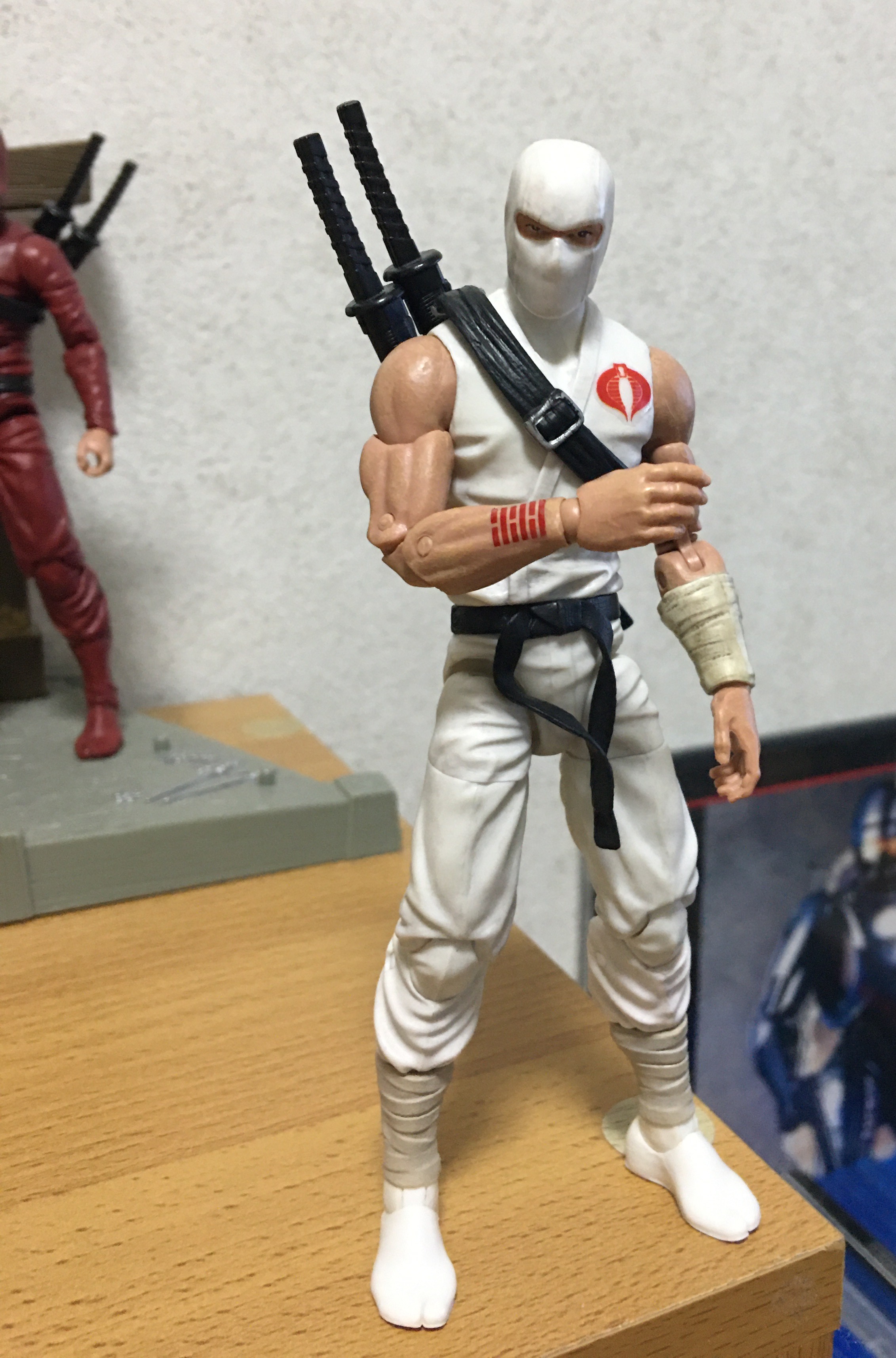 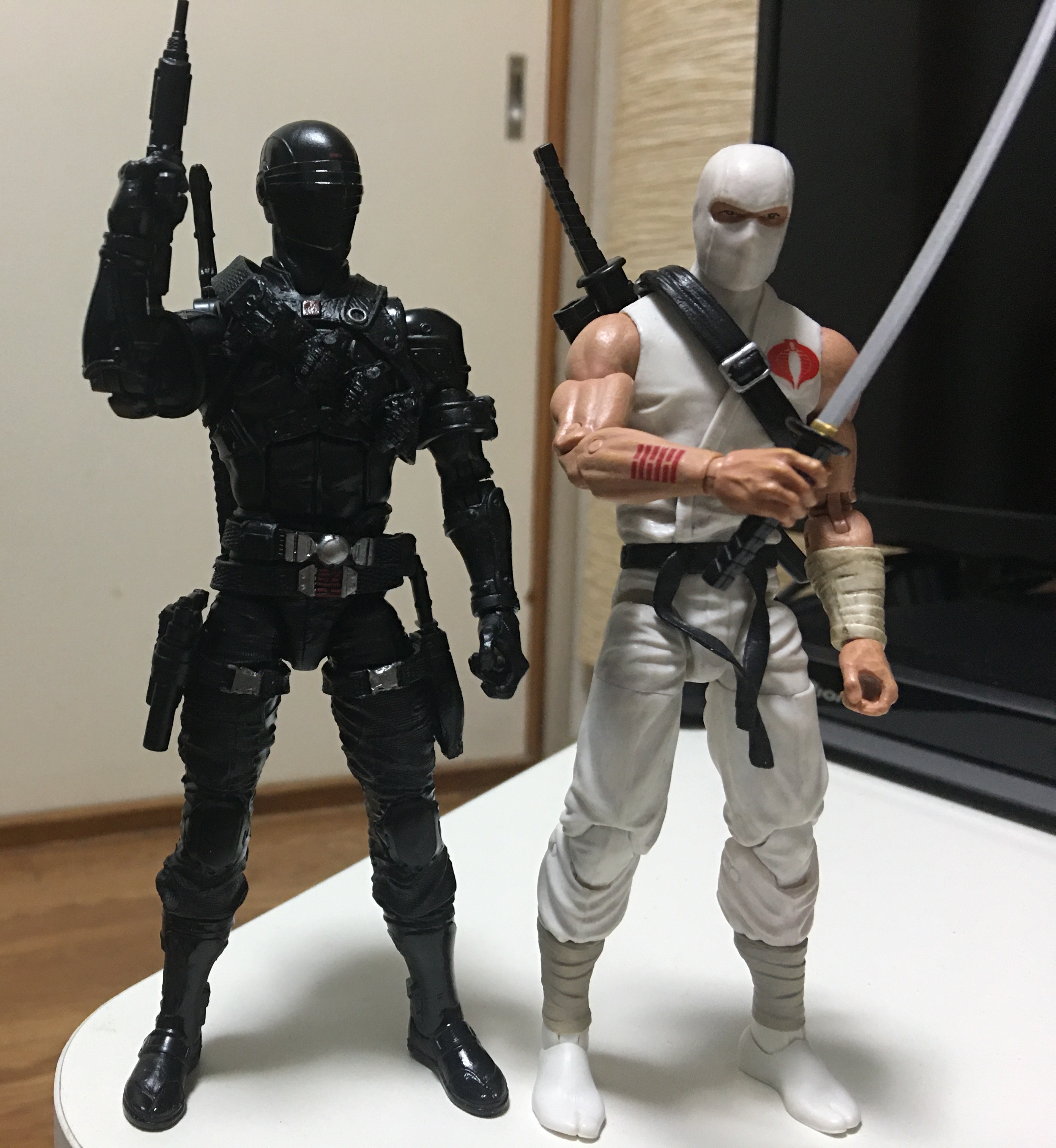 I like it, I'll definitely look into the Cobra logo at least, just have to figure out how to paint decent eyes if I get one.

Sadly I followed the store link and it looks like the bare arms pack was a thing of the past. I definitely like the sleeveless look more than the single arm sleeve of tattoos the current promo art depicts for him, whether or not it'll actually get used.
Top

Got Flint yesterday and Lady Jaye the day before ,both from gamestop. Incredible figures. Never noticed the gold eagle on flints shirt...very cool. His vest is gonna have to come off. Lady Jaye is perfection so far.
Top

Each of my closest Walmarts have 4 Cobra Commanders...so I am guessing I missed Flint?

Did get 2 Cobra Infantry from BBTS & Zartan from Pulse.

I have to be honest, the Cobra Infantry are just OK. I actually find them a little boring. Think I hyped these up too much after missing the Cobra Island version.

Zartan on the other hand, WOW! Other than Baroness he may be my favorite in the line so far.
Top

madflava wrote: ↑
Thu May 06, 2021 3:45 pm
I wonder if anyone has done a magnet mod on any of the rifles for Cobra Trooper. I've seen a mod like this for the Black Series Mando.

That was literally going to be my suggestion; those tiny rare earth magnets aren't especially expensive, and it seems like it wouldn't be too hard. I'm strictly amateur hour on mods and customizing, but I've drilled out the feet on a few figures to glue magnets in them, and it's always been pretty easy.
Top

Specifically the tiny thin pegs that they use. I thought I’d loosened up my Zartan enough, but just noticed that there’s a stress mark forming on one of the pegs. I don’t know if there’s anything that can salvage it or if it’s just a matter of time until it snaps.

It’s bad enough how hard these things are to collect, can we just have a figure that won’t fall apart less than a day after opening it?
Top

Snake Supreme and Regal variant Cobra Commanders are back up on pulse.

Premium only until 1pm.

rwsharpjr wrote: ↑
Fri May 07, 2021 5:09 pm
Snake Supreme and Regal variant Cobra Commanders are back up on pulse.

Premium only until 1pm.


Maybe I shouldn't have said anything.


Both sold out during the premium window(again).

Ok, went down to the local hobby store and bought shock oil (really put them for a loop when I told them why I wanted it, but they sell figures there too so they were understanding)

Crisis averted. And got to do this nonsense I’d been planning. Because there’s only one thing I think of when it comes to monkeys paws

I think Hasbro needs to work on the hip ball and socket tightness or will they let this go on for 12 years like Mattel WWE? I would have broken countless modern figures if I were still a 10 year old when I used to tear open the packages before leaving the parking lot. It's kinda funny how McF DC gives me the least amount of issues right out of the box.
Top
Post Reply
4497 posts