They're the same characters so why would anything be different?
Top

They're the same characters so why would anything be different?

Because the original file cards are approaching four decades old and don't all make sense for these versions of the characters? Do you think that this version of Duke really enlisted in '67 and went special forces in '69? He looks really, really good for a dude pushing 72 on the low end. 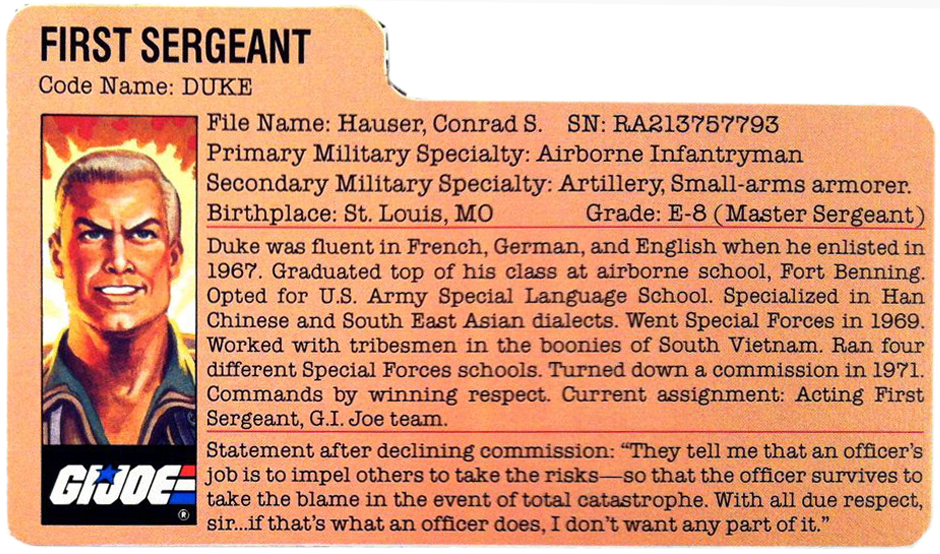 Besides, despite being the same character, they made new file cards for different versions of characters, all the time. Snake Eyes has a bunch of different file cards. It was a neat feature to have, and it would be cool to see them update the file cards to reflect these more modern versions of the characters.
Top

I don't know that character backgrounds and personal info really needs to be updated, as their personal story really is just that, personal. I think it'd be much more profitable to create new characters with contemporary conflicts to be involved in, ie: Iraq / Afghanistan etc. as those characters expand the universe and then become marketable or popular. It's like the people who argue that current iterations of Magneto need to be "updated" because his experiences during WW2/the Holocaust were so long ago. If it's part of the character's story it's inherent to what makes the character who they are. Cyclops is from the 1960s and looks to be in his mid 30's since the early 90s. I've never had a problem with it.
Top

It's a bit of a paradox then, I guess. Cause you have these more modern looking soldiers with modern equipment, but they are clearly the same characters as in the 80s.

For me, the characters ARE the characters, and Larry Hama's filecards (and comics) are the bible. Snake Eyes, Storm Shadow, and Stalker are Vietnam vets. Cobra Commander is a former used car salesman.

"Story" and "plot" aren't that important to me anyway. I don't play with my figures. They just stand on the shelf and look awesome. I don't need to justify the differences in my head in any way. If anything, people should be asking why in the world Snake Eyes is still carrying an outdated weapon like an uzi.

I hadn't really thought about whether these toys are supposed to exist now or in 1984. But if pressed, I'll just say they're in 1984. GI Joe was pretty much full on sci-fi fantasy after the first few years anyway. So for me, the old file cards still work just fine.
Top

The trouble with updating the file cards is that every time they’ve tried to do that after Hama’s direct involvement (and really even in the original line after a certain point), the file cards became diluted and lost focus and we got things like “urban specialist” Beach-Head and lost all the delightful character bits that Hama dropped in. I doubt that “modern” file cards would pack the same punch or be able to be as detailed and complete. Unless we are at “Sun Tzu quotes on Destro’s file card” level, I don’t know that it is worth it.
Top

If they updated the file cards, the people who don't care about them could just continue to ignore the updates to them and continue to use the old file cards while the people who enjoy the modernization or who are looking for modern takes on those classic file cards or who want to know more about these characters could have them, so that seems like a win/win, to me. It was always kind of neat to have those file cards on the back of the package, and it does help people know more about the characters if they don't have as much knowledge/background with them (like, say, that Barbecue is a firefighter, not a flame-thrower trooper).

Whether they'd do the file cards in a way that makes them as interesting as the old cards is, obviously, a totally different question. They've done updated cards before, like with the Sigma Six line, and I found those a lot less interesting, for exactly the reason ace mentions, but I don't think that makes updated file cards a bad idea, it just means the execution wasn't there.

My thing is I’d like updated file cards on the backs of the classified line. Once they get around to doing classic releases on 6 inch, I’d like the original RAH file cards to be on the back of those boxes.
Top

The Bios on the GI Joe website are pretty good. They aren't as personal as the original file card.
Top

Did the BAT and Alley Viper ever go up for preorder for MSRP on Amazon? By the time I saw them it was resellers who wanted $80 or something ridiculous.
Top

Haven't seen them on Amazon, yet, but BBTS and Dorkside both have preorders up, still.
Top

Amazon proper has not had them up yet, only the schmucky gougers so far.
Top

Yeah, Timber is an absolute must, and he needs to be standing next to Visored Snake Eyes.

The Commando Snake Eyes was a nice bonus, but Timber really "completed" the 1985 version. I was happy to retire the various PVC model wolves I had standing in for a real Timber.
Top

I'm going to put Timber as my #10 figure of the year. Just Timber, no Snake Eyes.
Top

yojoebro82 wrote:I'm going to put Timber as my #10 figure of the year. Just Timber, no Snake Eyes.

Timber alone made my Top 10 this year. Just an absolutely lovely figure.