FIGURES IN A HALF SHELL! NECA, Super7, Playmates, if it possesses Turtle Power, talk about it here.
Post Reply
78 posts

Re: "The Loyal Subjects" TMNT

Dr Baghead wrote: ↑
Thu Mar 11, 2021 9:41 am
Can ya post a picture of Vicious (or Spike) next to NECA Toon Shredder, April, Android Krang, Super7 Bebop, and Toony Terror Beetlejuice.

That should be a good scale guide for how short the Turts will look in a variety of situations, and how tall Lydia will be 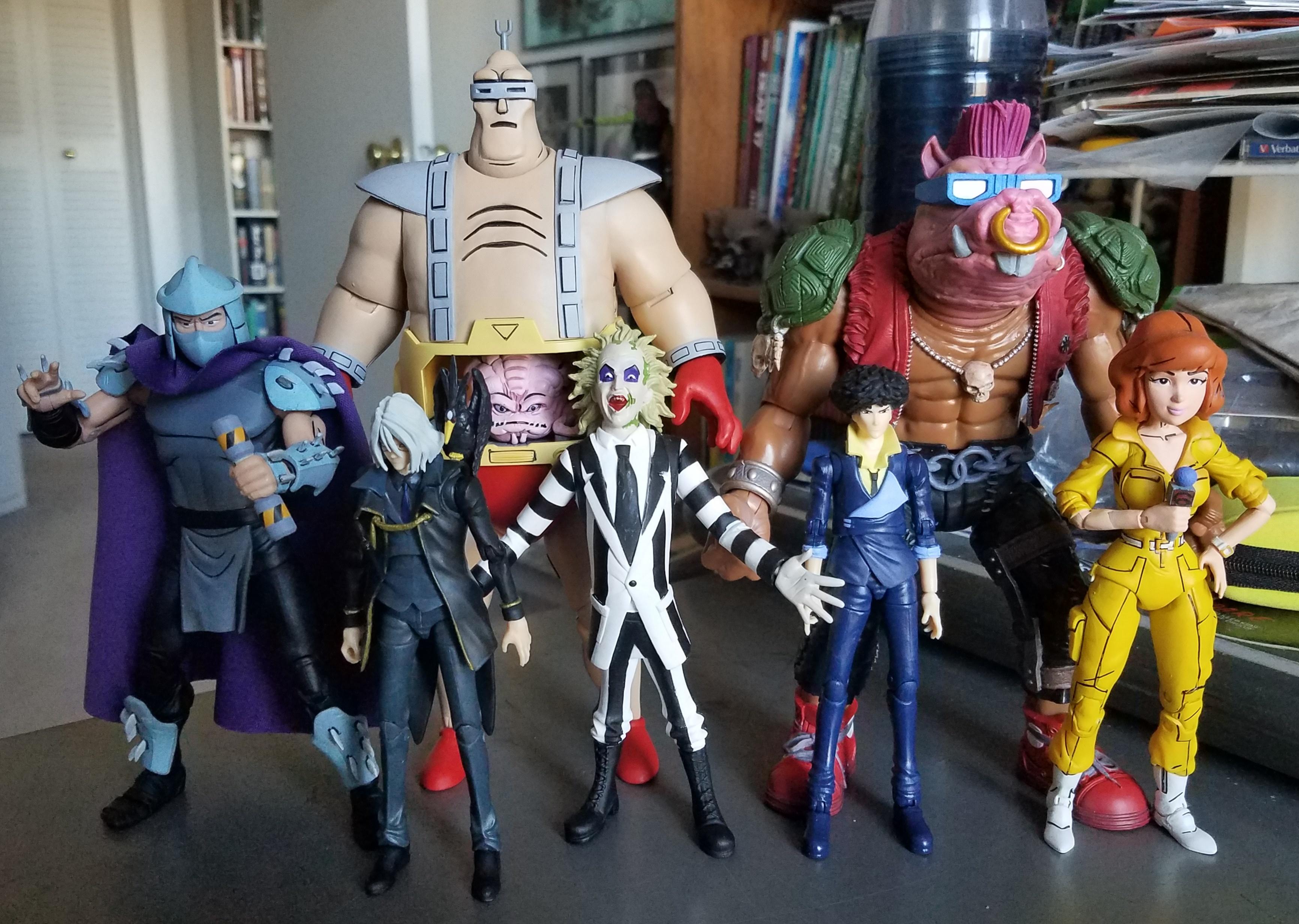 Re: "The Loyal Subjects" TMNT

Yeah, no saving April... and Shredder is too tall next to the BST AXN... but oh yeah, it’s all coming together.

Lydia, as long as the sculpt looks good, will be perfect.

And they might not be a good displaying set of Turtles, but for photos that size is gonna size for fighting big guys.

Hopefully they get it together and wave 2 turns out better than wave 1.
Top

Final images for these figures are now out there. Should be coming to Walmart relatively soon and they look pretty terrible, but your mileage may vary: 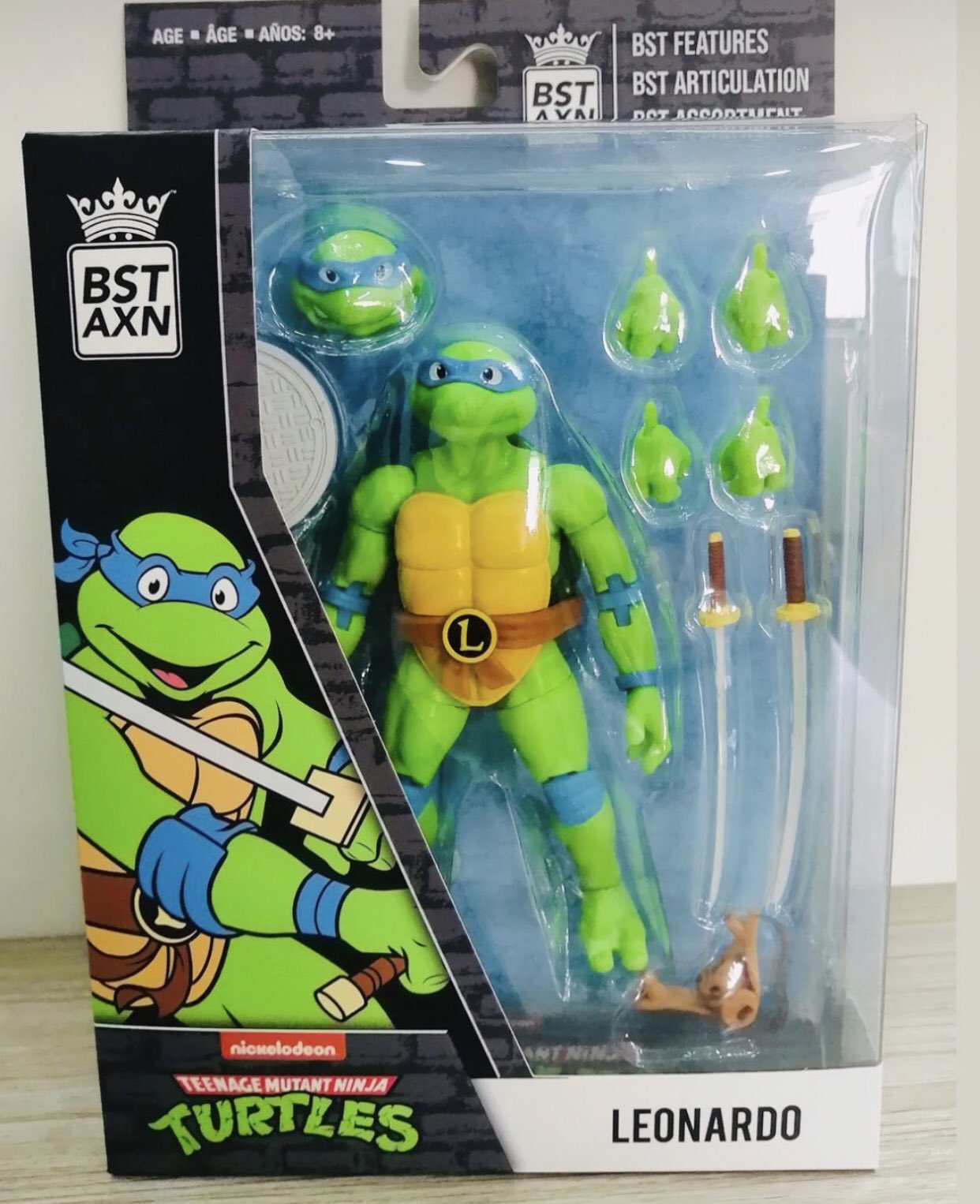 Woof, those elbow joints......... But for cheap junk you can put at your work desk and muck around with, it's not so bad.

edit: Though the heads look beyond jacked up. They're like... squished? They look blunted, like some of the later Turtle incarnations. At $15ish apiece, maybe they're worth it? I dunno.
Top

Not for me. But I'm sure there's people out there who don't want to hunt for the NECA figures or pay the Super7 prices.
Top

These are atrocious. But they will fly off the shelves at first

I do not see what’s wrong with them? Looks like smaller scale turtles to me.
Top

I don't like the super bright green and the overly happy cartoony faces. They're fine for what they, like I said they're just not for me.
Top

They’re pretty much exact copies of the SHF releases, right down to the accessories and swap-able belt parts. Obviously, the articulation is quite different though.
Top

I don't like the neon color. The elbows are...interesting. But I don't think they look too bad. But you know...collectors either think things are "the best ever" or "piles of trash." These look fine for $15. Not sure what the quality control is like on this line (ie floppy joints), but these look like decent affordable, poseable Turtle toys.
Top

I’m on board if I can find them. I hate Walmart exclusives, always impossible by me.
Top

I mean cool that they're so cheap to get but the loud colors and the 1 to 1 with the figuarts really make them come off a bit KO-ish...
Top

Other than the bright color, these look fine. Will need to see in person if the colors are more muted. Presumably they only have the license to the "licensing art" or some odd work around.

I rarely see these figures in person though, but as these go, they look pretty good. Of course, they clearly have/copied the Figuarts stuff, which explains a lot of it.
Top

Ash Talon wrote: ↑
Thu Jun 17, 2021 1:57 am
I don't like the neon color. The elbows are...interesting. But I don't think they look too bad. But you know...collectors either think things are "the best ever" or "piles of trash." These look fine for $15. Not sure what the quality control is like on this line (ie floppy joints), but these look like decent affordable, poseable Turtle toys.

I just don't see who they're trying to please with these and they just smell like a quick cash grab because TMNT are doing so well with other companies. About the only positives I see are affordability and presumed availability relative to offerings from NECA and Super7 and even the SHF they're copying. They're basically 10 bucks cheaper than a NECA product, but don't even look half as good. As a collector, I like saving money, but I'm also not going to buy something that's pretty ugly just to save money. Nor would I buy this for my 6 year old as he's likely to just lose all of the small parts and honestly is happier with his $8 Pokemon figures anyways.

Figures can be cheap and look nice and appeal to kids and collectors. The Mario and Sonic figures from Jakks look fine for what they are and Hasbro has some neat Star Wars offerings at lower price points. These just look like they're trying to be collector-grade figures, but without collector grade quality, and just look like bootleg SHF instead. That's just my feeling, if someone thinks they're neat and wants them then more power to them. As others attested about this company when this line was announced, I would recommend buying one at first and seeing how it is before going all-in. It's one thing to look like a bootleg, but if they handle like them then that's another problem all-together.
Top
Post Reply
78 posts