FIGURES IN A HALF SHELL! NECA, Super7, Playmates, if it possesses Turtle Power, talk about it here.
Post Reply
219 posts

I mean belt swapping wouldn't really change anything since I'm assuming the weapon holsters are also molded onto the straps on the back, so you'd be swapping weapons, too.

Plus I mean..,putting the belt with the t-rex coin on the very obviously tricera-based suit doesn't suddenly change the designs or colors or what have you.
Top

I think it's wishful thinking that they have a torso cut anywhere. In all the shots, the lines on the front of the chest are lined up perfectly.
Top

Shell looks like a rubbery overlay, there's probably a standard MMPR buck under the shell.
Top

MARVEL KNIGHT 2099 wrote:I mean belt swapping wouldn't really change anything since I'm assuming the weapon holsters are also molded onto the straps on the back, so you'd be swapping weapons, too.

Plus I mean..,putting the belt with the t-rex coin on the very obviously tricera-based suit doesn't suddenly change the designs or colors or what have you.

The weapons would move correctly to the corresponding turtle still. Belt logo vs putting the turtles in the colors you would rather them be... so if its swappable, he can just swap them and make turtles the color he wants. If he would rather Donnie be te blue ranger, swap the belts, and the head. Easy peasy

The fact that you can see some waist articulation cuts in the torso underneath definitely has to mean that at least the torso armor is soft material. Otherwise why bother with it.
Top

It might not be, they could just be articulated like the NECA toon figures and the Super7 Ultimates which have waist articulation that just has enough clearance to spin even with the shell. Well, the NECA ones can twist all the way around, I don't think Super7's can.

The mid-line on Donatello's chest in the below picture doesn't look like it's lined up with the portion below the belt which has me wondering if they snuck a cut in the front shell behind the belt. And the way the rear shell is positioned it makes it look like it plugs in around the shoulder blades so it might not be much of a hindrance. 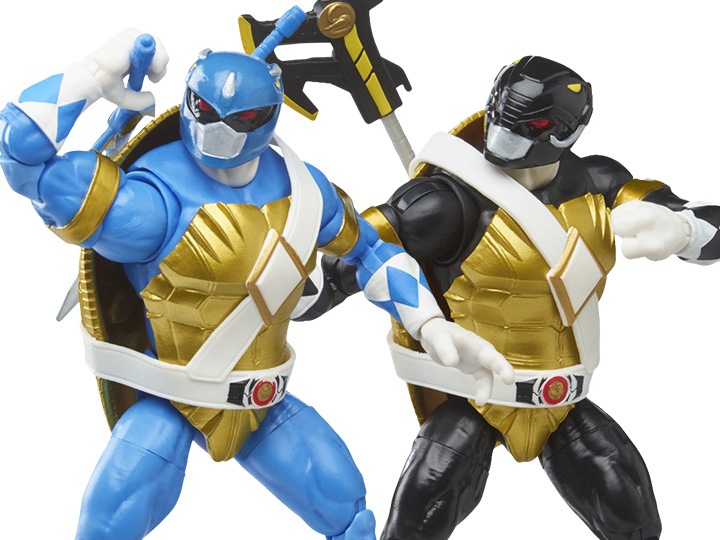 Looks like more turtle news coming this Friday. Maybe someone will demo one of the figures during the stream:

Watch the others be exclusives.
Top Didn't think they'd pack April with one of the turtles.

And I'm pretty sure that, from what I remember, she's not a reporter in the crossover so that just pushes the animated movie angle more. Could be wrong.
Top

The other turtles had pinheads but Mikey takes the cake.
Top

Nice. Heads are still weak. So shredder is standalone. Then it’s Raph and…?
Top

Why not just put all of them up for order at the same time?
Top

They must be packing April with a turtle to make sure people don't skip her, because she's just the standard Pink Ranger with a different alternate head and a few accessories. Which stinks because the Lightning Collection Pink Ranger is easily the worst from that line. Hopefully they do a better job with the color matching on April. No chain on Mikey's chuks is a bit of a bummer. Hopefully that plastic is nice and bendy.
Top
Post Reply
219 posts