FIGURES IN A HALF SHELL! NECA, Super7, Playmates, if it possesses Turtle Power, talk about it here.
Post Reply
264 posts

I'm a big enough man to admit that I was wrong when I said there was almost zero chance they'd even ever follow through with releasing the second set of two-packs because the extra figures probably weren't even being worked on.
However... they would have been better-served disappointing everyone by not releasing anything than by disappointing everyone with this.
Top

This is just sad. I feel like if the world of toy collecting were an amusement park that was exclusively for grown collectors and companies who love and support the same thing, then poor old playmates would be sitting in the corner by the exit on that little coin operated rocket ship because they weren’t tall enough to get on any of the rides. And all the rest of us can do is wait for them to mature so they stop holding up the rest of the group…

I love that Triceraton. Could use a small army of those.

Shredder looks like he'd go good with the new Funko TMNT. But I hate having to buy these in 2 packs with Turtles I don't want.

Anyway, they look good and a lot of egg on a lot of people's faces.
Top

ODBJBG wrote:I love that Triceraton. Could use a small army of those.

Shredder looks like he'd go good with the new Funko TMNT. But I hate having to buy these in 2 packs with Turtles I don't want.

Anyway, they look good and a lot of egg on a lot of people's faces.

At this point I have to wonder if you are secretly employed by Playmates as a social media hype guy or something.
Top 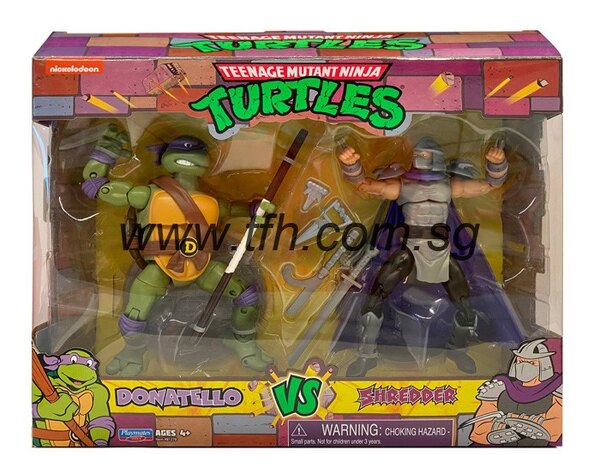 This set is the professional equivalent of one of those knock-off sets from the dollar store. There's the gigantic Donatello that was seemingly developed to counter NECA and S7, only without the sculpt or paint that makes NECA and s7 desirable. Then there's the teeny little Shredder, which seems to be in maybe a 5" scale vs the 7" scale of Donatello. THEN, there's a the re-used vintage TMNT weapon rack with the kama that's as dull as a butter knife. When compared to Shredder, it really drives home that Shredder is scaled to the classic Turtles, while Donatello is huge to compete in the collector's market. This haphazard set really drives home that Playmates is doing the least possible work to hang onto their slice of TMNT and keep better companies from taking over retail space.

Can’t tell if part of Shredder’s chin is tucked under the cape, or if his head is actually squished like that
Top

I think part of the head is obscured by the cape, but it's definitely not the same head from the prototype we saw oh so many years ago. It looks like they tried to just do a toon head, where as the other one was more stylized. If we want to grade on a Playmates curve, Shredder looks okay. Not exactly comparable to what NECA and Super7 are doing, but not an abomination or anything. It's the scale that's awful so I can't imagine displaying him with the turtles who dwarf him. The Triceraton looks pretty bad though. The original is far more fearsome and intimidating, this just looks goofy. The pictures are obviously low quality and maybe both figures will look better in person, or maybe they'll look worse. If they were 15 bucks and single carded, I'd say "fine," but they're priced much closer to what NECA offers and that just isn't going to do it.
Top

I'm fairly certain that Shredder's head is as tiny as it looks. You can see where the mouthplate seems to square off just before you get to the cape.

Triceraton has a tiny torso and his arms are too big for him. They didn't even bother to paint his pants properly.
Top

Lol you know what the dumbest part of this whole saga is, 8 years after scrapping the Krang and Shredder figures because they were too undersized, Playmates had the hindsight to not make the same mistakes as they did last time. They could have tweaked the molds slightly to make the shredder appear larger. They could have paid closer attention to the character models from the original show to ensure that the character designs were just a little more on model this time around.

But instead of using any of that time to put forth any effort to make these figs better, or taking what worked in the 2012 line that fans did appreciate, they just rereleased the same undersized shredder and threw in a Triceraton that’s also way too small because “Meh…why not?”

At this point I’m convinced that they aren’t really aiming for a specific target market or demographic anymore with their “collector” figures. They’re just reacting rather than creating. Thats a dangerous and precarious place for Playmates to be.

That Shredder is simply embarrassing. It genuinely looks awful in just about every way imaginable. The armor bits all look too big and flat, the cape looks like a stiff piece of crap, and the headsculpt is DREADFUL looking. It's too small and doesn't even have the eyebrows painted which just makes it look disgusting. Just as everyone else has pointed out, he's also nowhere approaching the same scale as the Turtles too. This genuinely looks like some kind of crummy knock-off.

I'd say I'm surprised at how bad it is, but this is Playmates we're talking about so I'm not. I also love how after all these years, Playmates STILL cannot properly paint the eyes on these Turtles going off of the promo pics.
Top

They made the choice to not have the figures scale with each other, but make them all the same height instead. Frankly, I don't get why anyone collects anything playmates.

Sent from my SM-G935P using Tapatalk

Obviously, the Shredder and Triceraton look small because of perspective. They're clearly packaged a foot farther back than the Turtles.

The Triceraton and Shredder may work well with vintage TMNT figures, as well as other 5" TMNT lines, like the 2012 line.
Top

Playmates just keeps embarrassing themselves with their “collector” products. They are clearly fish out of water in this market.
Top
Post Reply
264 posts