FIGURES IN A HALF SHELL! NECA, Super7, Playmates, if it possesses Turtle Power, talk about it here.
Post Reply
3711 posts

Handsome wrote: ↑
Fri Oct 22, 2021 5:18 pm
I ordered two of the four Turtles. I plan on having one set of heads with the TMNT figures I posted above. I plan on using the other heads with other '80s toys on a separate three-shelf bookcase. The four Turtles on one shelf. I have the Diamond Select Real Ghostbusters from a few years ago, so the four of them on another shelf. And then another shelf with the Ultimates Optimus Prime, He-Man, Lion-O, and a Classified Snake Eyes. The Snake Eyes might be a little small since everything else is in 7" scale, but I prefer V2 Snake Eyes with the visor, and the Ultimates version is the V1 Snake Eyes with the stupid goggles that I hate.

How did you like the DS Real Ghostbusters? I thought they looked great and was gonna' splurge on all four, but kept hearing negatives about how the plastic was brittle and they're prone to breakages.

For the price they're selling for these days, I have a hard time recommending them. Nothing's broken yet, but all of their accessories get warped super easily, so you constantly have to heat them up to straighten them out. They're all on the same body, which isn't a huge deal, but you remember things form the cartoon like Ray being the fattest or Egon being the tallest, and that's not really represented.

But the biggest issue is that they're impossible to keep standing. I put them on stands and they still sometimes fall over. Honestly I'm tempted to just glue them in place and turning them into statues. I wouldn't mind getting rid of these if Hasbro or Super7 were to make a Real Ghostbusters line.

If you have nostalgia for that show, there's really no other option. If you can get them for a decent price, I'd say go for it. But the last time I checked, they were selling for an insanely high amount. 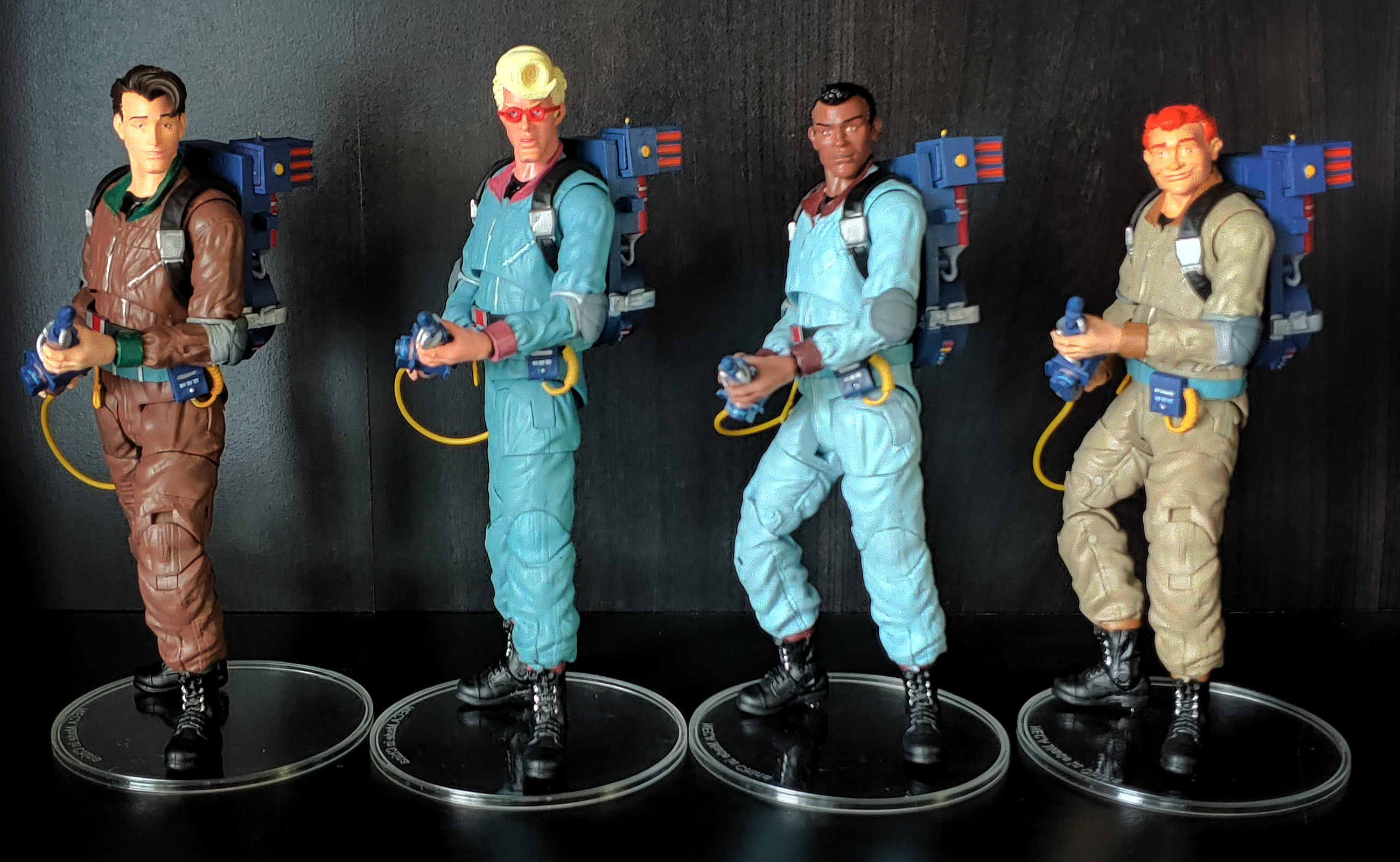 Love my DS RGBS. But everything said here is true, aside from the standing issue. Mine stand up just fine since they came out. But they are amazing. 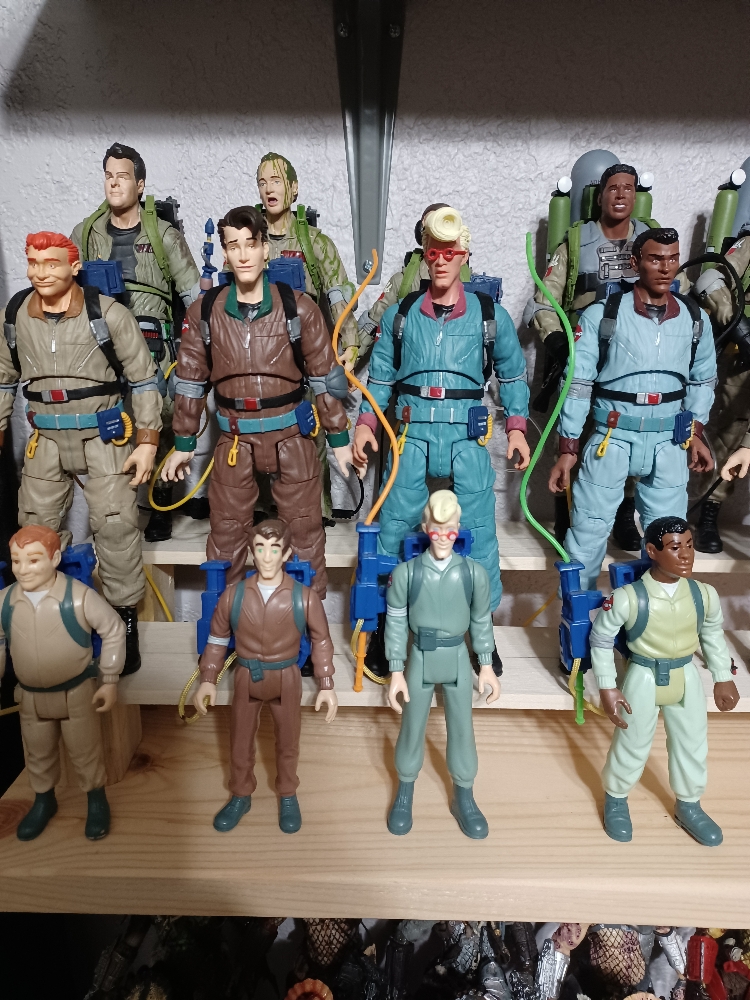 Yeah, I always thought they all looked fantastic aside from Ray, who like you said, isn't fat, and whose face reminds me of a caricature of Ed Asner who's in the middle of filling his diaper. Venkman, Egon and Winston look marvelous though.
Top

UGH, I hate that I couldn't afford them when my preorders dropped & had to cancel them.

Was definitely hoping for Hasbro to do some for Plasma, but it looks like the license is dead in the water unless Afterlife can save it (not feeling very positive about that potential, either).
Top

I can’t wait for wave 4 to start shipping.
I rearranged my collection recently and I’ve been really admiring the work that super 7 has done with this line.
Gotta have Donnie lined up with his brothers ASAP
Top

Getting Donatello is going to feel quite satisfying, even if he's essentially the same figure we now have three versions of. I was going through all of my preorders recently and realized we just passed the one year mark for Wave 4 solicitations. I've grown so used to delays this year that it hadn't even occurred to me that it's been that long.
Top

I feel like we still got waves 2 & 3 pretty close to each other, though, yeah?
Top

Define close. Some people got wave 2 in December, most probably in January. Wave 3 was August. Wave 4 is tracking to be about the same length of time between 3 and 4 as 1 and 2, which is likely the model they hope for.
Top

And hey, as someone who is collecting both, it seemed a LOT longer between when others got Thundercats w1 (which I didn't need/couldn't afford, because I have the Matty versions), and "w2" (really 3) hitting a few weeks ago.
Top

Finally got Wave 3 in (Canada retailer preorder, hope that Toys Downstairs guy is a little quicker than who I used before but I'll only find out next year)

Gotta agree with people who said this wave isn't a slam dunk. All the little issues add up... the fragile tubes behind Metalhead's knees, Rocksteady's tiny accessories, April in general. I got some bad paint apps on Mikey too, though luckily not on the head I intend to use.

But I'm not unhappy with any of the individual figures. Just not blown away. It's nice to have Rocksteady in particular, I think I would have been more impressed by him if I hadn't known what to expect from Bebop. I'm looking forward to the character choices in all the future waves a lot.
Top

I've thought the same thing. It's complicated, because I know wave 3 is good, but I think it's one of those contrived instances where a line's success drums up unrealistic perceptions of failure. Wave 1 shut up the critics, myself included (still eating crow on that one). Wave 2 made a toy of the year contender with Bebop. I think wave 3's cooled down reception is a result of them not resoundingly topping the previous waves, coupled with its high point (Rocksteady) basically matching wave 2's without adding additional wow factor. I can only imagine what it's going to be like going forward with the $10 increase in price piled on top of that.

There's also the fact that wave 3 brought analogues to the earlier wave's issues with it.

Mutagen Man let some people down over its engineering/build issues (water-tightness), same as Metalhead (leg issues). But they're both masterfully sculpted and beautiful toys at their core.

And, truthfully, Shredder is just as janky and weird as April, but they were smart enough to not make Shredder janky and weird and shiny. April should have the advantage over Shedder on paper, because unlike Shredder they actually addressed the vintage head issue with what was supposed to be a cleaner alternative. Yet Shredder gets a majority pass while April was (rightfully) dragged through the mud the whole way through the developmental cycle and after release.
Top

Yeah, I know Super 7 were aiming for a wave every 4 months(ish) but we're closer to every six month at the moment. Waves 1 & 2 in 2020, 3 & 4 this year, and 5 & 6 next year (no way we're getting wave 7 next year at this point). Those who got wave 2 this January (so most people who didn't order direct from S7) will likely get wave 4 in January as well so technically a lot of people will probably get 3 waves next year, but I'd still count wave 4 as a 2020 release as long as it does start delivering in December.

The big delay was between waves 2 and 3, with that behind us hopefully they can get back towards the original "wave every 4 months" plan and get 3 waves out in 2023.
Top

Wave 3 slam-dunked on me.

I've never had anything against Metalhead. The toy was cool as a kid. I was looking forward to this "upgrade."

I was not expecting him to be my favorite figure of the entire line so far.
Top

) what are everyone's top wants for the next few waves? For me it's probably:

Honorable mention for Usagi Yojimbo, whenever the rights are cleared up.

And throwing in a few "new" characters to spice things up a bit:

) what are everyone's top wants for the next few waves? For me it's probably:

Honorable mention for Usagi Yojimbo, whenever the rights are cleared up.

And throwing in a few "new" characters to spice things up a bit:

Rat king is definitely my most wanted and Krangs Android body is a close second.
Other than that my list of wants from future waves is

I am very curious what they will do with Fugitoid.
Top
Post Reply
3711 posts