FIGURES IN A HALF SHELL! NECA, Super7, Playmates, if it possesses Turtle Power, talk about it here.
Post Reply
3336 posts

If anyone has both Super7 and NECA cartoon Metalheads, would you be kind enough to post a side by side size comparison?

I pre-ordered 1/26 this year and they hit my POL last week. I wonder if it's just random how they get fullfilled?
Top

MarvelLegendsMan wrote: ↑
Tue Aug 03, 2021 7:09 pm
If anyone has both Super7 and NECA cartoon Metalheads, would you be kind enough to post a side by side size comparison?

There's a comparison in the Toy Bro review: https://www.youtube.com/watch?v=AYgEVf6f5i0

zodach wrote: ↑
Tue Aug 03, 2021 2:26 pm
At least you guys are getting them shipped. I ordered from Super7 and they haven't sent me anything yet. I thought getting them first was supposed to be part of the deal with ordering direct.

When you have whiny, childlike adult customers (not here, but we all see it online), it makes sense to hold off shipping partial orders if all they are getting is straight shipments of single figures from the factory.

Normally BBTS is later in getting the S7 product, but in this one instance, it seems it's been flipped. As evidenced in this thread, not everyone who ordered from BBTS has gotten the in stock email, so it's likely a small number of their shipment they got in, and more are incoming.

Definitely seems like they're trickling in, and EE has only had select ones available too. Super7 probably expects to get their allotment first, and it just didn't work out that way. I wouldn't count on this being the status quo going forward and am chalking this up to an anomaly. I guess we'll see how the next drop goes, be it from the TMNT line or Thundercats, Disney, etc. It sucks to have to wait long, especially for those who paid a little more in shipping to hopefully get them as soon as possible by going through Super7, but this is just toy collecting in 2021: release dates and windows have lost all meaning and nothing makes sense. Stuff arrives when it arrives.
Top

MarvelLegendsMan wrote:If anyone has both Super7 and NECA cartoon Metalheads, would you be kind enough to post a side by side size comparison?

From ToyBro's Twitter. Some people are like "Wow, NECA version looks so much better", but I still prefer the detail and design of the Super7 version, and I bet the articulation is a touch better. 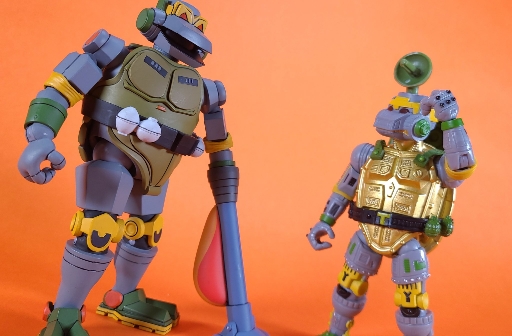 Sent from my SM-A505U using Tapatalk

I don't care abut the cartoon designs for most figures. Shredder's really the only one where I prefer the cartoon look over the toy look. But for like Metalhead or Slash, the toy designs are so much better than the simplified goofy cartoon looks. Just on the design, I like the Super7 Metalhead much better than the NECA. Plus I like that the Super7 is actually shiny. I know they're going with the "cell shaded" look for the NECA figures, but I still would have preferred it if they gave him some shine.

I know he was a good guy in the one episode of the cartoon he showed up on, and his toy was listed with the good guys on the back of the Playmates cards. But I remember him as a bad guy, I always used him as one when I was a kid. Maybe because he was a boss in Turtles in Time? https://www.youtube.com/watch?v=EfA3RC6UQ_4 But I'm gonna display him with the villains.
Top

Seeing more and more images and reviews of April, I'm honestly surprised with myself that I've really come around on her from my initial reaction and genuinely think she looks quite good now.

Not great, far from perfect, but enough that I actually like it.

I've also gotten over my grumps of the lack of vac metal on Metalhead. He looks great. Even Mikey's crazy alt face has really grown on me.
Top

Yeah, I'm pretty much getting 100% what I could have wished for when the line started. Sure, the articulation isn't the greatest, but I knew that going in. I think for the most part I'm going to try to pose them in the style of their old toys anyway, so I don't need any crazy Spider-Man type of articulation on these. The only problem is the waiting.

I am a little concerned about the scale of the unannounced figures, though. So far, I haven't had any issues with the liberties they've taken on the sizes, but you never know. For example with Slash, I hope they keep him around the Turtles height. I know on his Playmates card he was listed at 6 foot while the Turtles were a foot shorter, but in both the cartoon and the video games he was short, so that's how I remember him.
Top

Slash will be Mon*Star's size.
Top

What does that mean?
Top

Handsome wrote: ↑
Tue Aug 03, 2021 9:30 pm
I am a little concerned about the scale of the unannounced figures, though. So far, I haven't had any issues with the liberties they've taken on the sizes, but you never know. For example with Slash, I hope they keep him around the Turtles height. I know on his Playmates card he was listed at 6 foot while the Turtles were a foot shorter, but in both the cartoon and the video games he was short, so that's how I remember him.

Metalhead is listed at six feet on his bio too so I don't think that's indicative of anything. Super7 seems to make a totally subjective choice when it comes to the height of the figures in this line so I guess we'll just have to wait and see. I'm good with Slash being around the height of the turtles, but preferably he'll have more bulk and just look monstrous in comparison. Conversely, I wish they had jacked Metalhead up a bit rather than make him the same height as the turtles. Half a head would have been good with a touch more bulk.
Top

I personally think April still looks like garbage. But the rest of the wave looks pretty damn good. We already know that the articulation is limited for this line but I'm ok with that. I actually prefer what they did with Metalhead instead of using vac-metal. The gripes I have with Mikey are trivial and probably won't even bother me once I have him in-hand.
Top

What does that mean?

It's just a joke, I promise,

I thought you meant the aliens from Space Jam
Top

Those are The Monstars (The Nerdlucks).

Speaking of which, has anyone made any decent Looney Tunes figures?
Top
Post Reply
3336 posts