FIGURES IN A HALF SHELL! NECA, Super7, Playmates, if it possesses Turtle Power, talk about it here.
Post Reply
3337 posts

Ooooooooh....aw man, I'd kinda wanna put the headset on the red hair...
Top

Mikey looks great!
Now if only mine would ship
Top

I am happy with my decision not to preorder April. It's also really odd to see Metalhead with a neck. Definitely disappointing to see they didn't paint any of Metalhead's accessories either, or if they did, they used very little. Rocksteady looks like he's going to be the star of the wave though. Hopefully some videos go up soon. I know ToyBro already had his Pile of Loot shipped so he'll probably start having reviews up next week.
Top

At first I was going to say April is kind of disappointing, but then, I'll wait to reserve judgement until I have her in hand. When you compare her level of detail to Shredder, it's actually not that bad? I think the initial take is wanting something that was better than Neca's toon version, but that's not what this line is, and as a representation of the vintage toy April, I think they succeeded.

I called my comic shop who i have some preorders with, and they're still looking at a Oct shipping date as per Diamond. We'll see how that goes, and I anticipate them getting them much sooner than that. In the past, they've gotten both Wave 1 and 2 well before most of the online shops up here in Canada.
Top 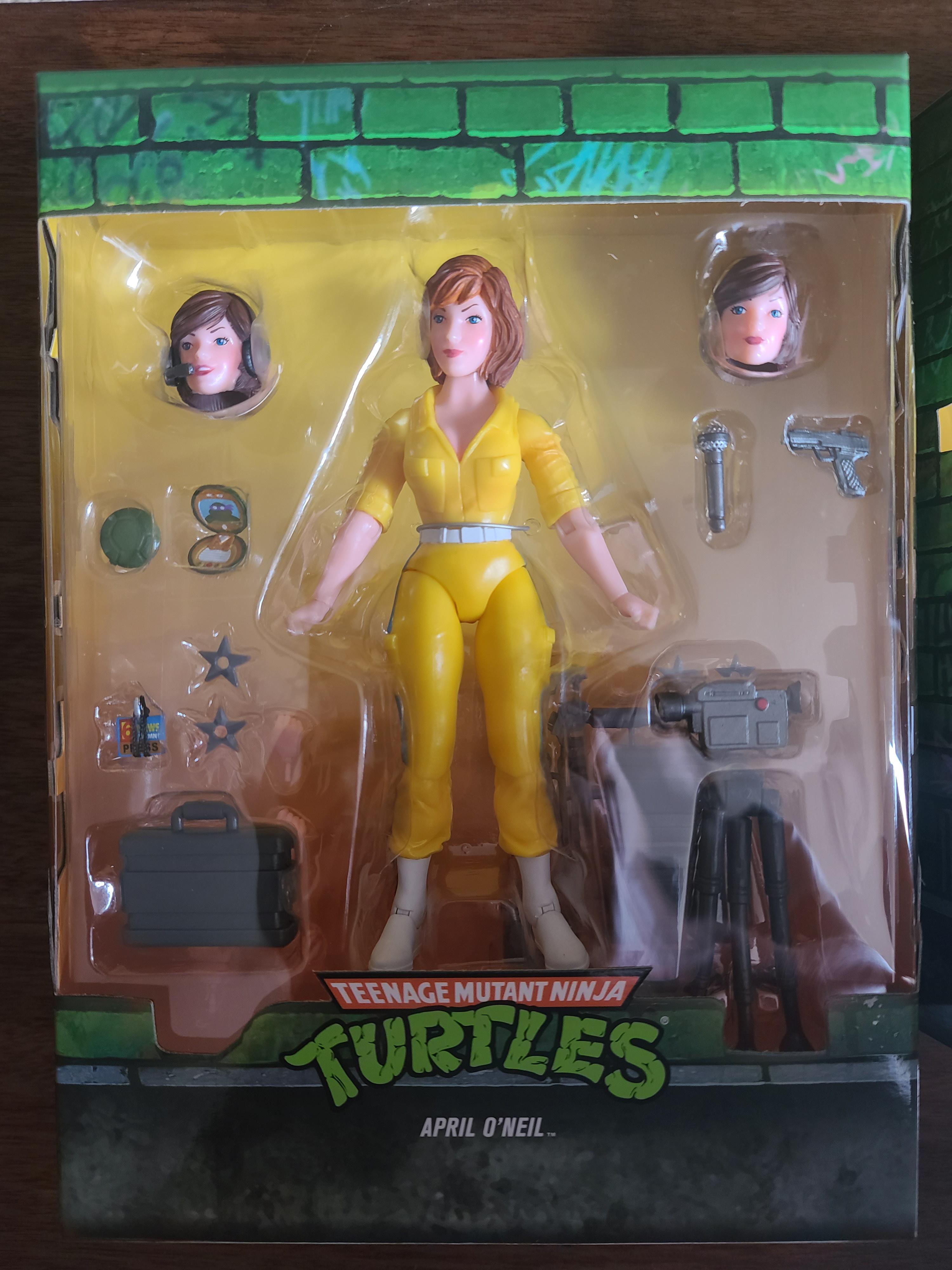 Hmmmmmmmmmm. Well she's not...terrible, will be happy to get her. But boy. They need to figure out how to use not shiny plastic. I think.
Top

April looks amazing. Soooo much better than the first promos. Excellent. Glad to finally have a decent April figure.
Top

So like...you're ignoring the very waxy looking plastic on her I guess?
Top

So like...you're ignoring the very waxy looking plastic on her I guess?

Are you not used to OD yet? Dude is VERY positive. Like Tony Robbins positive. But for toys.
Can't even say that's a bad thing to be. Wish I could 'see the good' as vibrantly as he often does.
Top

Will definitely need to see a review video of her before I pre-order.
Top

Would dull coat work on her I wonder? I know I hear Robo talk about it in reviews, I just've never touched the stuff. I have to assume it's totally safe for these plastics then?
Top

April looks better than in the old promo pics. That April head looked like Amy Klobuchar to me. I would have preferred a more cartoon style head for her in particular, but I realize they want these to look as close to the old toys as possible. So I'm ok with the redheaded head. I don't love it, but I think it'll look fine on the shelf with other characters. I don't see myself ever using either of the darker haired heads. Those will be about as pointless to me as the Shredder head with his eyebrows on the helmet.
Top

Detrimental_Fig wrote: ↑
Thu Jul 29, 2021 10:34 pm
Would dull coat work on her I wonder? I know I hear Robo talk about it in reviews, I just've never touched the stuff. I have to assume it's totally safe for these plastics then?

Yup (if we're talking Testor's Dullcote - that's the only version I'm familiar with). It's just a protective varnish. Totally safe on most plastics and just kills all the shininess. The only "problem" (YMMV) is that it won't have a factory look anymore, because toys don't have matte finishes on them. Most toys are more satin finished. So a toy totally covered in dullcote might look a bit off in its own right (although probably still less so than a super shiny figure).

The other option is Munitorum Varnish from Citadel, which is a satin finish. But I'm actually not sure if it's strong enough to knock back the level of shine on April.
Top

The rest of the wave looks fantastic. Highlight for me is still Mikey since we'll be one step closer to having the complete team. Also glad they gave him the gunmetal grey for the belt, like Raph. Guess Donny will have that silver paint like Leo.
Top

Will definitely need to see a review video of her before I pre-order.

It's always a struggle to do female figures right, and I don't envy anyone tasked with making them. It's easy to make non-humanoids, monsters, and beefy men look exaggerated, but it's a fine line with the girls. I'm torn on whether the new heads look better than the revealed head. It's weird, because the old head looks more believably in proportion in the promo shots, but the new heads might look far better in-person. And, yeah, they definitely have a China doll look to them due to the glossy plastic (at least under these lighting conditions).

Ultimately, it looks like this won't be THE definitive April figure for me. I don't think anyone has really made one yet either. I'll begrudgingly say it's probably the best April figure I've seen in awhile, acknowledging that it's at least trying to be faithful to the original toyetic look of the original figure and not trying to replicate the more familiar cartoon version (but still had some of its influence here).

A coat of matte finish might do wonders for her, and I'm talented enough I could arguably repaint her hole head and face, but I'm always more reluctant to do so on higher-priced figures should I screw it all up.
Top

Misfit wrote: ↑
Thu Jul 29, 2021 9:58 pm
It's also really odd to see Metalhead with a neck. Definitely disappointing to see they didn't paint any of Metalhead's accessories either, or if they did, they used very little.

It's odd, but looking at the pics blown up, it's growing on me. I was thinking to maybe paint the neck grey to match the other parts, but it's a question of where you would naturally separate the gold and grey. I think I'm ok with it for now. Some paint on the weapons would be nice, but I've also got a lot of nostalgia for the green itself. Likely cost cutting due to the vac-metal gold torso?

The flash in the photo definitely isn't helping, and she could have more shading and detail on her face, but for me, she's well proportioned, and does a good job of being April. I had pretty low expectations for her based on what we had previously seen, but they've beaten those. She's still the bottom of the wave, but so it goes.
Top
Post Reply
3337 posts