FIGURES IN A HALF SHELL! NECA, Super7, Playmates, if it possesses Turtle Power, talk about it here.
Post Reply
58 posts

Is it weird that I'm ok with naked Turtles, but I find naked Splinter to be so, so wrong? And why does Mikey have sausage links?
Top

scottg10 wrote:Is it weird that I'm ok with naked Turtles, but I find naked Splinter to be so, so wrong? And why does Mikey have sausage links?

It's what the original Movie Star Mike came with. He uses them as nunchuks in a scene.

I still need to re-get Fugitoid (among others).
Top

Looks like another reissue incoming, this time of the movie star figures: 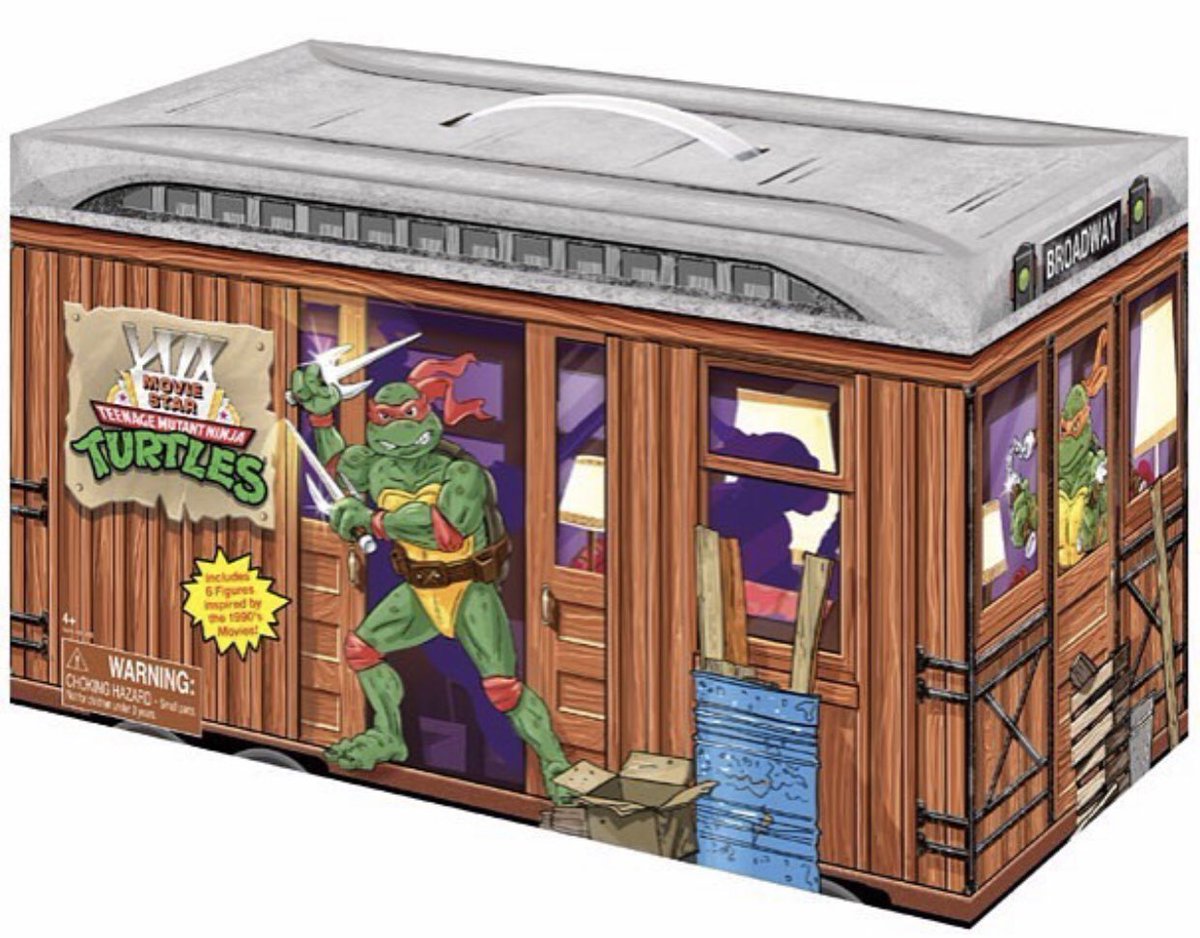 Doesn’t matter if it’s from the vintage line or those off model versions that were done in the Playmates Classics like a few years ago....pass. Playmates quality is too subpar for me to even notice them these days.

If these turn out -just- like the original movie star turtles, there's actually a good chance I'll be just weak enough to buy them. I've always loved that version of the turtles.
Top

I got my copy of Rad Plastic yesterday, a book about the development of the original Playmates line up until it ended following the flop that was The Next Mutation. It's not bad, it's an oversized book of about 400 pages that's mostly images so it's a brisk read (I went through almost the entire book in one night). It's definitely focused on how these figures are made, more so from a sculpt to final version and not really conceptual. I would have liked to hear more from the artists and sculptors about their thought process when they decided to do a new figure and less about how a mold is made. It also has a list of every figure Playmates produced as well as vehicles, playsets, plush, etc. but it's really hurt by not having a visual checklist. I would have loved an appendix in the back that was just one, individual, shot of each figure in the line. There's also lots of concept art and prototype images of stuff not released. Overall, I had a fun time with it even if it wasn't exactly what I had hoped it would be. The below shot from the book shows how we almost got a blue Mikey and an orange Leo. It's amusing to me since the original title cards from the cartoon famously colored Leo orange and Mikey blue. 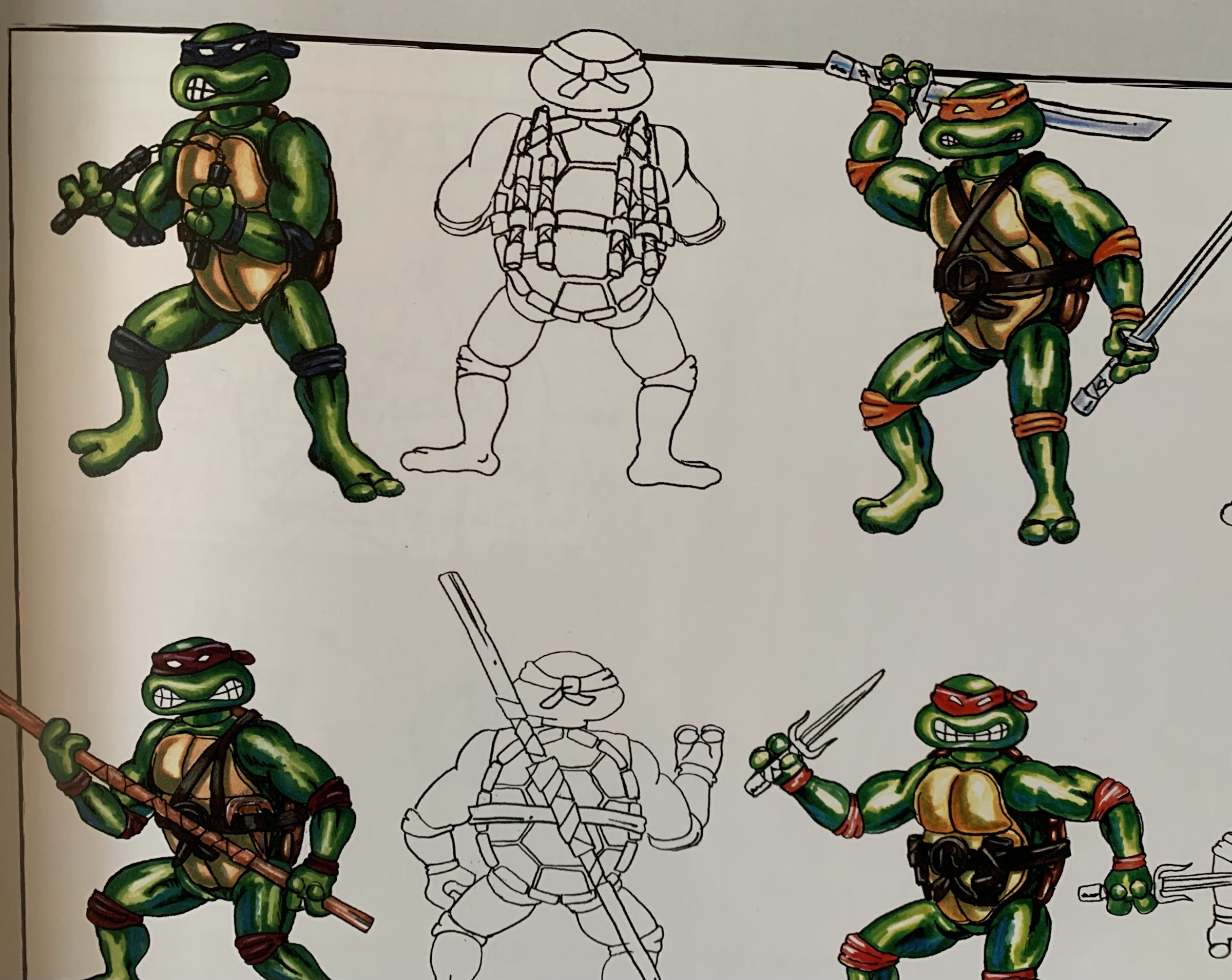 The original henchmen designs were all humans at first. This guy was going to have a snot gun that fired actual slime bullets. Looks like a lot of his DNA ended up in Bebop. 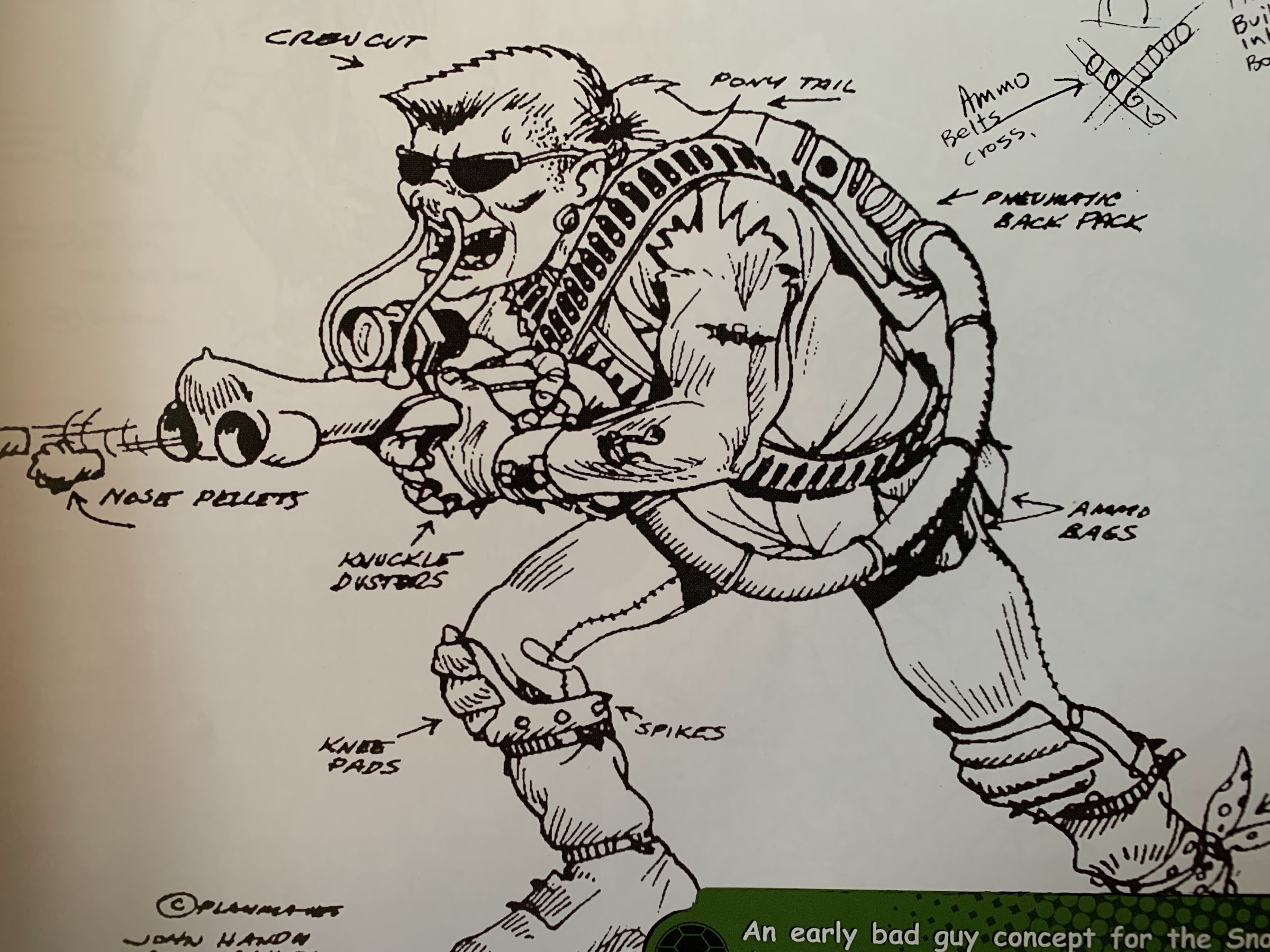 One more shot I'll share, the original sewer lair was going to have a giant face on the wall that was like their spirit guide. He had the very original name of The Face. Thanks for sharing that I should get a copy of that book. I’m glad they reigned some of that craziness in

Playmates movie set is now available at Target. Splinter isn’t movie Splinter and is just a repaint of the 88 release. None of the turtles come with their movie accessories, just an old sprue:

The only reason I would be interested in this, would be if they retained their rubber skin. With this Leo looking exactly like the one in the Leo Generations set - and whatever radioactive ooze Raph jumped in before getting in the box - OT looks like these will be hard plastic. That Splinter is one of the biggest jokes in this entire line from this complete joke of a company. Wow.

I hope Hasbro blows the socks off Nick and gets the basic line in house. Playmates is negligent at this point. The only way that I hope Hasbro gets the license though, is if it becomes just a variety of licensors getting to make what they want without restriction. So NECA doesn’t HAVE to make $50 packs as retail exclusives and everyone has full access to the line. Make NECA and Super7 compete on the open market and maybe stuff like paint apps and loose joints magically fixes itself going forward.

Misfit wrote: ↑
Sun Feb 28, 2021 2:31 pm
Playmates movie set is now available at Target. Splinter isn’t movie Splinter and is just a repaint of the 88 release. None of the turtles come with their movie accessories, just an old sprue:

This *might* be the worst set they've done. I can't even begin to fathom who thought that Splinter was an okay repaint.
Top

These really are terrible. That said, the price is not bad so I put an order in for now. I never had Raph or Leo (not that this set changes that), but it's hard to say no to a complete team (including a hilariously awful Splinter) for less than $10 a pop.

Misfit wrote: ↑
Sun Feb 28, 2021 2:31 pm
Playmates movie set is now available at Target. Splinter isn’t movie Splinter and is just a repaint of the 88 release. None of the turtles come with their movie accessories, just an old sprue:

This *might* be the worst set they've done. I can't even begin to fathom who thought that Splinter was an okay repaint.

I would have been surprised if they redid the flocked Splinter from SotO, but they also did a straight plastic reissue of that fig for TMNT 3 so why couldn’t they do that here? Just cheap and lazy. Playmates clearly knows they can keep putting out these haphazard sets and know they’ll make money. I’m a little disappointed since this was the one set I had some interest in, but I can’t say I’m surprised. I’m still tempted by it just to get a new belt for Mikey (I lost mine as a kid) and some more OG weapons, but it’s not worth 45 bucks.
Top

Is this the same set that went up on BBTS?
Top
Post Reply
58 posts