FIGURES IN A HALF SHELL! NECA, Super7, Playmates, if it possesses Turtle Power, talk about it here.
Post Reply
2575 posts

NECA probably likes it this way because then it gives you a reason to buy the farm two-pack for Casey in a tank top and April in her striped shirt! I actually don't have that set because I'm just not interested in having a second April and a third Casey, but if I didn't have the Ultimate Casey, I'd have probably grabbed it for the unmasked head. I think if I only had one Casey I'd probably have to display him with the mask on, but options are always nice. For what it's worth, the trench coat Raph is a pretty nice figure. Obviously, it's the exact same as the other Raph just with soft goods, but the coat is really well done and it's rather easy to pose the pair. Though, again, if screen accuracy is your thing the lack of an unmasked head is a bummer.

NECA's likely going to be pretty disappointed, then.
I'm intentionally keeping my movie collection small, with only one of each character that I want. So I only have Super Shredder, the original Turtles, and I have the regular April. Now I just need Casey, so there's zero chance I buy the two-pack because I don't want another April in my collection. Just like I don't want another Raph.
I'll have to just stick it out and hope I find an Ultimate Casey one day. I can be patient, and I really want to display him with the unmasked head because I was so excited that NECA (and Judith Hoag!) made that happen.
Top

Yeah, my local Walmart is now up to 5 Farm 2-packs, 4 Ultimate Aprils, 2 Yoshi/Saki sets and 2 Super Shredders. Stuff is just falling in to the floor it's piled up so much in the electronics aisle.
Top

I saw on Twitter that the Secret of the Ooze 2-packs might be hitting Walmarts already? I don't know if it was TRUE of course, haven't heard much else since. Haven't seen any SOTO Shredders pop up. There are a couple Walmarts that have Super Shredder, and the Guthrie Walmart has the Farm 2-pack and April still. But for the most part things have cleared out around here.

But all the damn Funko Gold Label and anime statues? Eeuuuuuuuuuugh. They will not stay in their area.
Top

Yeah they’re hitting. We were talking about it a few posts up.
Top

Is anyone still spotting any SotO Shredders at Walmart lately? Things seem quiet on that figure lately.
Anyone find him using Brickseek?

After seeing some in hand shots of the Soto Turtles I’m not sure I want them as much as I did. They look great and I do love the movie but seeing them side by side with the original turtles really made it clear how similar they are. They’re very close and where they’re different the original turtles are superior

I ordered the accessory set and I might just stick with that.
Top

Yeah, I never expected them to be much different. Some updated engineering, new belt for Mikey, and a slightly different shade of green to go with new heads. The actual body suits were pretty similar to the first film so there wasn't much need for NECA to re-sculpt anything. I just wish they had finally re-sculpted Mikey's legs to make him shorter than the rest. He just doesn't look right being the same height as his brothers. If I didn't have the makings of a SotO display by virtue of the villains I've purchased, I probably could have passed on the turtles since I personally don't even like the film anymore. Since I do though, it made it too easy to separate my movie display to two shelves in my detolf, one for each movie.
Top

I just reason the movies are all the same universe so minor costume differences are not important. All the bad guys from the second movie would have looked perfectly good in the first movie since it’s still Jim Henson work. I’ll run into an issue if they make Paige Turco April, but in that case I may just let the better figure win out.
Top

I'm going to take a real shot in the dark here and assume this is the reveal everyone has been waiting for: 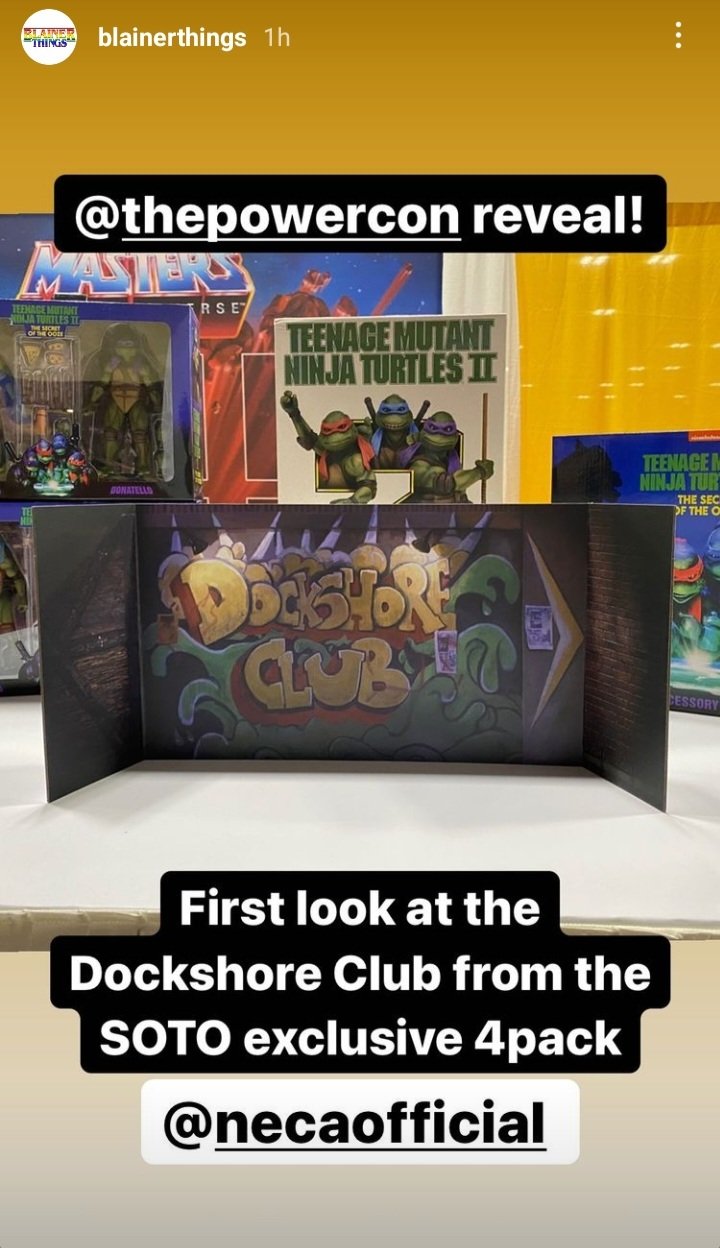 That MIGHT just be the backdrop to the turtles 4 pack itself and NOT another set with a figure of some vanilla frozen water.
Top

It's just an included backdrop in the VHS four-pack. It is on a thick cardstock, so it's not like the usual backdrop in the two-packs, but so far is the only "reveal" from PowerCon that's TMNT related.
Top

I just spotted two SotO Shredders this morning. I'm not picking up SotO, so I didn't realize he was hard to find...
Top

Any chance you spotted them somewhere in Indianapolis?