The place to talk about ThunderCats toys from all the companies!
Post Reply
1112 posts

PantherCult wrote: ↑
Sat Sep 25, 2021 12:45 am
I think Bengali will be in the next wave - since Pumyra and Lynx-O have already been solicited. Regarding the ThunderKittens, i'm interested to see what they do. Mattel did them as a two pack, but I don't think Super7 will go that route. I could see them releasing each as a single packed with a Berbil. The Berbils could essentially be 3-poa accessories and the same sculpt could be used with different color fur and noses to do different Berbils. So Wily Kit with Ro-Bear Berbil; Wily Kit with Ro-Bill Berbil; maybe even Snarf with a Berbil as well. It would make the pack out seem more "worth it" at that point.

I do think, at this point with Wave 3 semi shipping that Super7 may go ahead and reveal Wave 5 at the time of their Wish We Were there-ic Con in early October.

See I think Super7 has a pattern they are following with the Thundercats team. Of course I have no concrete information to base this assumption on, so take my bloviating into account when you read this, and that my words may be coming from the wrong hole.

Anyway, if you look at the first 4 waves, they have included the "new" Thundercats in the even number waves. Pumyra (wave 2) and Lynx-O (wave 4). So if that holds then the kittens are probably next, and Bengali is going to be in wave 6.

Slithe arrived today. Man, he is a big guy. Makes me wonder how heavy Snowman is going to be!

Mine has a tiny paint ding on one of the fins, but otherwise, he's absolutely perfect. The art on the box was a fun addition, even if I don't usually keep packaging. The articulation is great, and the way Super7 hollowed out his head a bit to give it a good range of motion really adds to the gestures you can get out of this guy. Love all three of his weapons, and he looks perfectly in scale when standing next to my Mattel Jackalman.

As of now, my collection consists of Super7's mummy Mumm-Ra and Slithe, and Mattel's Pumyra, Jackalman, WilyKit, and WilyKat. Kind of an odd display without the re-released Lion-O and Panthro I have on order. Do we know if there's any hope for them before the end of the year?

Looking forward to shipping Jaga as soon as he arrives at BBTS. Still on the fence about buying a Captain Cracker, though...
Top 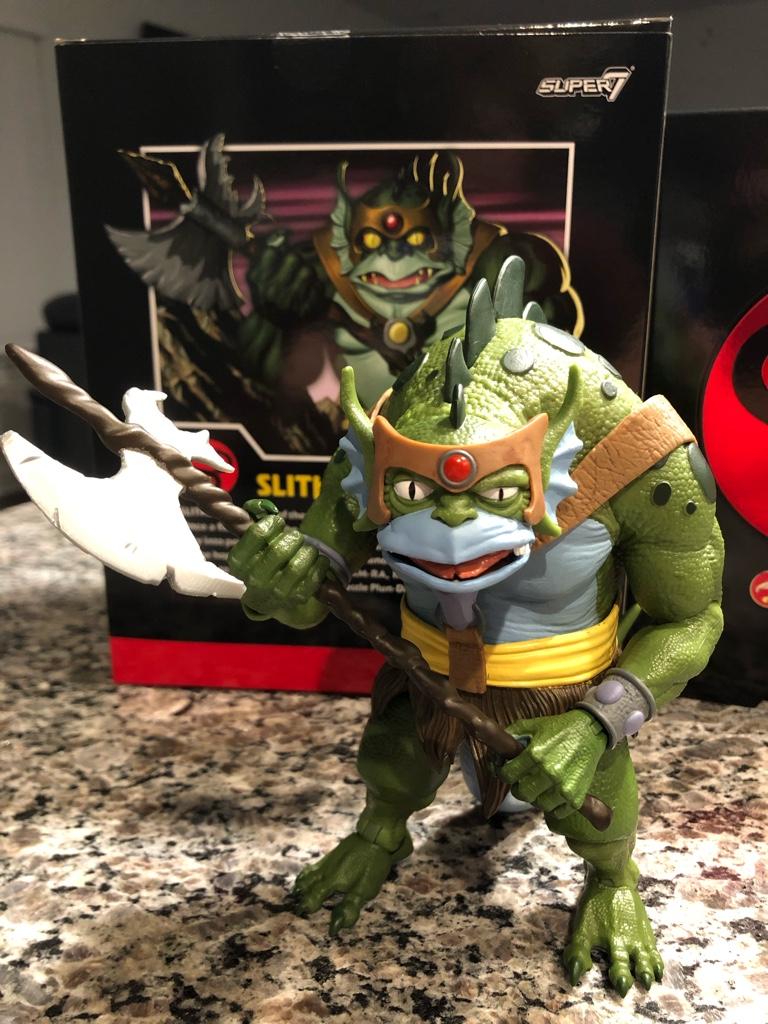 Thanks for posting that. Not enough pics.
Top

So I know the old LJN Slithe figure came with the long ax. Do we know the reference for the mace and other ax that came with the Ultimates figure. I love this mace but I’m not sure if it was just a thrown in accessory or has a deeper meaning.
Top

Both were in the cartoon.
Top

Also, I had to take the boi outside today. 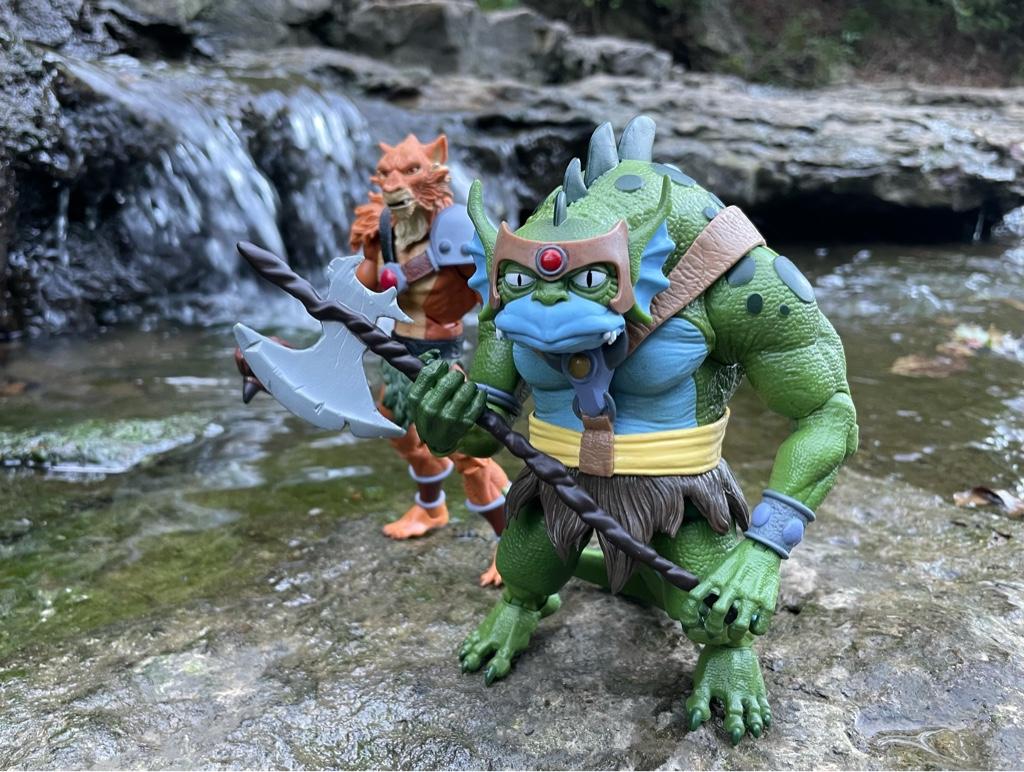 I know I would be one misstep away from having to let my figures dry out after giving them an unintentional bath. Hell, I'd probably end up in the water too...
Top

Haha, that is the one downfall to that spot. It is really pretty and I love going there for pictures, but it is precarious. I REALLY wanted to get more action-oriented pictures, but I shared that same fear of taking an unintentional bath.

Actually, it can be a popular spot for engagement and senior photos, and I HAVE seen a photographer take a dip before, heh.

Yeah, I have no connection to the character, and don't really dig his look all that much (kinda want that parrot, though, haha). I cancelled my preorder almost immediately after placing it (right after the wave went up).

Cancelled Jaga & Pumm-Ra, too (a few months ago before I got my new job), as those aren't my primary desired versions of the characters. I'll always display mummy in front of The Ever-Living, but I wouldn't really display Lion Jesus, unless I came up with personal canon for a completely different character, and that's an expensive thing to do, lol.

Really hoping they do a ghost Jaga, and they don't put Snarf or any Berbils with the Kittens. It was hard enough passing on Mattel repeats for extra heads & accessories - I won't be able to justify passing if new smaller characters are released with them.

Luckily, they're the last repeats, so fingers crossed I don't have to double dip, lol...
Top

What's everyone's opinion on a possible increase in wave numbers from 4 figures to 5 figures?

It seems like Super7 is doing that with some of their newer waves (Simpsons, TMNT wave 6). Would that be a good, or bad thing in your opinion? It would mean more characters, sooner, but also a chunk more money per wave.

Also would the extra figure be better as a figure, as with the Simpsons, or an "accessory/army builder" as with the Mousers in TMNT wave 6?
Top

Just got an email from Super7 to update my shipping address if there were any changes. Apparently Jaga is now at their warehouse and they are beginning to process orders!!!
Top

They HAVE to do a ghost Jaga right?!

Not sure I need a regular Jaga, but I absolutely need his ghost!
Top
Post Reply
1112 posts