NORM wrote: ↑
Tue Aug 02, 2022 2:01 am
God I hope Target comes through with my Motormaster order. I’m keeping that PO because I got a discount. But I also just got notice from Pulse they were getting ready to charge for their Motormaster, so I quickly canceled. I hope that wasn’t too hasty.

I got my shipping notice for Motormaster from Target tonight. Hope you made the right choice!
Top

Motormaster is such a great toy. I can't say that I care for the trailer transformation other than to combine, but the figure is great and it's going to look amazing as Menasor. I have him hanging out right now with his lonely Dragstrip arm. I need more Stunticons soon!
Top

I did a Target app search for the Target Terrorsaur and found a store near me that said they had a few. 5 in fact. But what's weird is when I went to get it, they had to pull it from the back and said they had 8. I guess the app was wrong or they got more and sold some between when I checked and when I got there? I'm gonna say the app was messed up. But it's weird cause it hasn't been in most cases recently. Anyway, I really like the colors on him. The Amazon one is screen accurate, but this one still looks cool. He's gonna be my BW Laserbeak. He has something weird going on with his hands though. It looks like he has some paint chipped on both of his middle fingers, little white spots, but the plastic looks like its molded in purple. So I have no idea why he has 2 white spots, same place, on both hands. And I'm afraid to try and scrape it off in case it is molded white, and painted purple, which, would be, a stupid design choice if that's the case. But Slag is that way. His hands are cast white painted grey, and they chip easy. So I repainted them black, I think it looks better anyway. Probably will just leave Terrorsaur alone. It's hardly noticeable. But it did cause me to seal the paint on his head, which is cast red and painted purple and white (which I also had to fix a small bit of), and the paint on all his green spots and purple shins, just to make it harder for the paint to rub off.

Target did wind up delaying my Motormaster to August 17. Maybe I’ll find it in store, so I can pick it up then return the online order for the full price. What a hassle.

I did finally receive Jhiaxus and Siege Soundwave with the clean deco. I ordered a while ago, in stock, and chose free 5-8 day shipping, and it took 2 weeks or more with Pitney Bowes. Pretty lame.

But the figures are pretty good. I know nothing of Jhiaxus, but he’s got a refreshing conversion that isn’t the same as all the seekers. Just a very odd color scheme to me. Soundwave is great in robot mode, as we all know. His light piping is yellow as opposed to the red on at least the Walmart version I have on my desk. Joints are nice and tight.

I’m pretty excited for more new stuff though. I hope Walmart starts shipping some of that Velocitron stuff. I have Clampdown en route from Pulse, but the rest minus Cosmos and Scourge were all Walmart for me. Also saw the bad scans of Point Blank’s alt mode and Peacemaker, and I’m even more excited.
Top

Do you have a preference between this clean Siege Soundwave and the original Siege Soundwave? They look pretty much the same in the videos I have seen. A red visor would have helped differentiate them. I was never able to get the Walmart exclusive Earthrise Soundwave.

I tend to prefer clean deco in general. Most releases are going clean, so I also appreciate consistency. That said, I plan to keep both, and this one will stay in robot mode.
Top

So I just found Motormaster in person at Target, so I bought it and will save the receipt so that once the online preorder I got on sale arrives, I’ll return that one with the in person receipt.

Motormaster himself… there is some really impressive engineering here, between MM’s cab/robot modes, his Menasor torso mode, the trailer’s conversion into the MM limbs and lower torso… it’s essentially the same moving parts are two, maybe three voyagers. The $85 is steep, but makes sense. He might even be more impressive than Rodimus Prime as a commander class figure. They’re certainly different, and very strong in their own ways. I can’t wait to build the rest of this guy.

Messing with Menasor has me wondering how they'll pull off ANY of the other combiners. With Motormaster, so much of what makes Menasor is made from the trailer. It makes sense to use that part of MM to distribute and bulk up and elongate, basically becoming the underlying structure of the giant robot. But how many of the others can actually do that? Maybe Onslaught? I don't think Silverbolt's Concorde could be bulky enough to do what MM does without an additional trailer. I'm not sure Hot Spot could pull it off either. I guess with Hun-Grrr and Scattershot, some license could be taken with their sizes to eventually accommodate the bulk necessary for the gestalt mode. I guess we just wait and see...
Top

Received Velocitron Clamp Down from Pulse today. It’s the umpteenth use of the Sideswipe mold (this time the Earthrise Lambo as opposed to Siege). But I’m still a sucker for it. Goes great with the white recolor of Sunstreaker, Cordon, though that has either yellowed a bit, or was never the pure white that Clamp Down is. I’ve been storing Exhaust (Wheeljack) in the same bin, and that is still just as white as Clamp Down, so I think Cordon might just be off white.
Top

Went to 5 Walmarts today, 3 of them had the Velocitron collection. 2xRoad Rocket, Blurr, and Burn Out at all three. Plenty of Scourge at all three. 3x Override at one, 2x Road Hauler at one. 1x Clampdown at one. 0 Cosmos anywhere.
Top

Norm you should read the G2 comic. It's where Jhiaxus was introduced and he's been a want of mine since! I might be waiting for a while, but everything mentioned here (plus Metroplex) will be purchased by the time snow falls at least.

Also I agree on Combiners and I think the design team has the same questions. There's no answers yet otherwise Protectobots or the like would be in the recent leaks. Maybe 2024. I don't think they want Hot Spot to be a Commander and I agree.
Top

The torsos should be no bigger than voyager scale. It’s a matter of figuring out what additional thing will make up the bulk of the limbs. Even for Menasor, a lot of his torso is made up of parts from the trailer! They were definitely taking queues from 3P MP versions of Menasor. But will they do the same for Superion, Defensor, Bruticus, Computron, Abominus? Will they even get around to those??
Top

Got a chance to open up Motormaster that I got from Dorkside. Such a fantastic figure! I have skipped on all previous Stunticons, but I was so impressed with these that I began picking them up. Motormaster himself is an excellent Voyager scale figure. Great scale with Optimus and Megatron.

But the trailer transforming into Menasor is really fun. Menasor looks great. Excellent proportions for a Combiner. Can’t wait to finish up his limbs. Hope the other Combiners can be made as nice as this one. 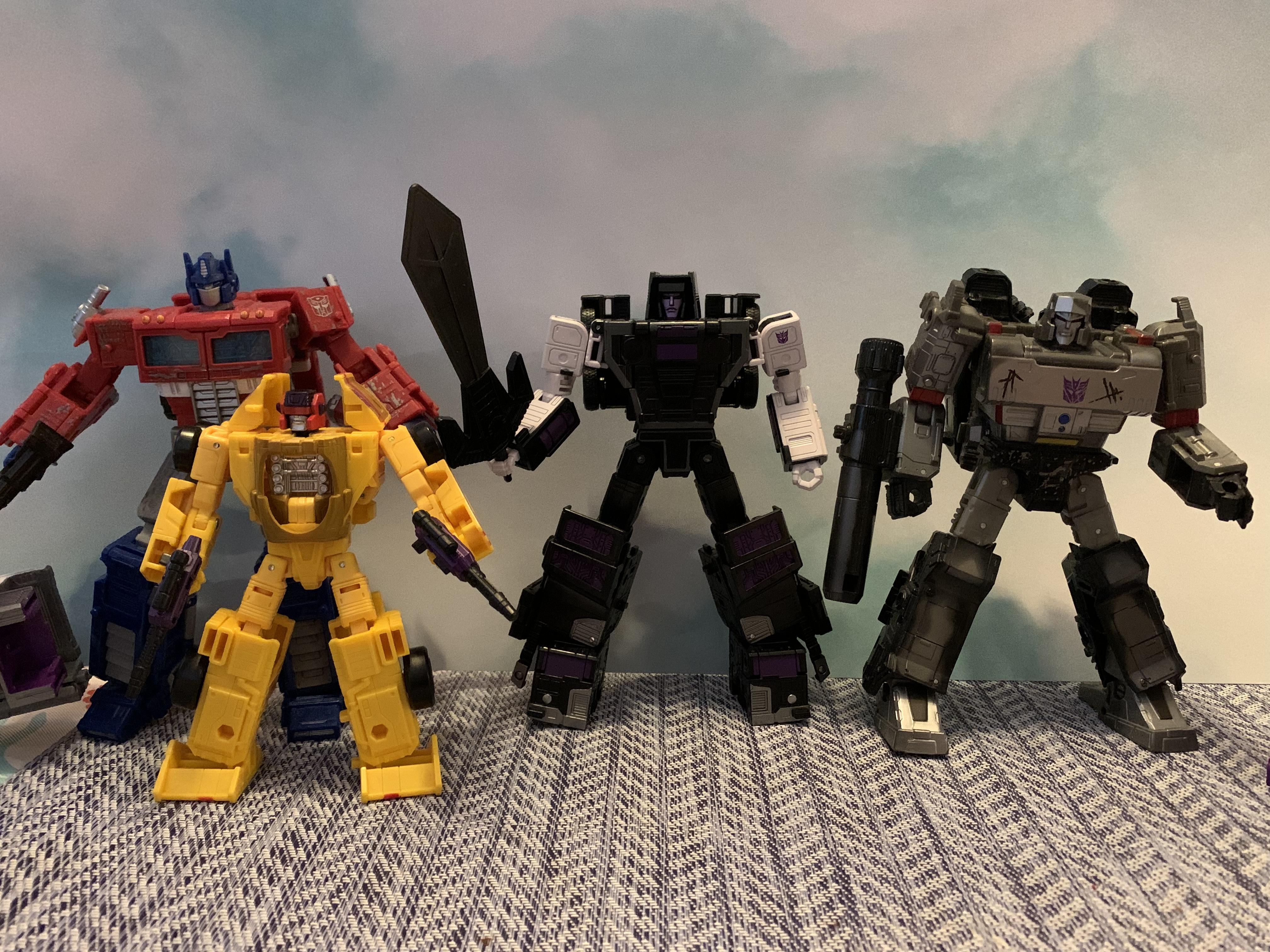 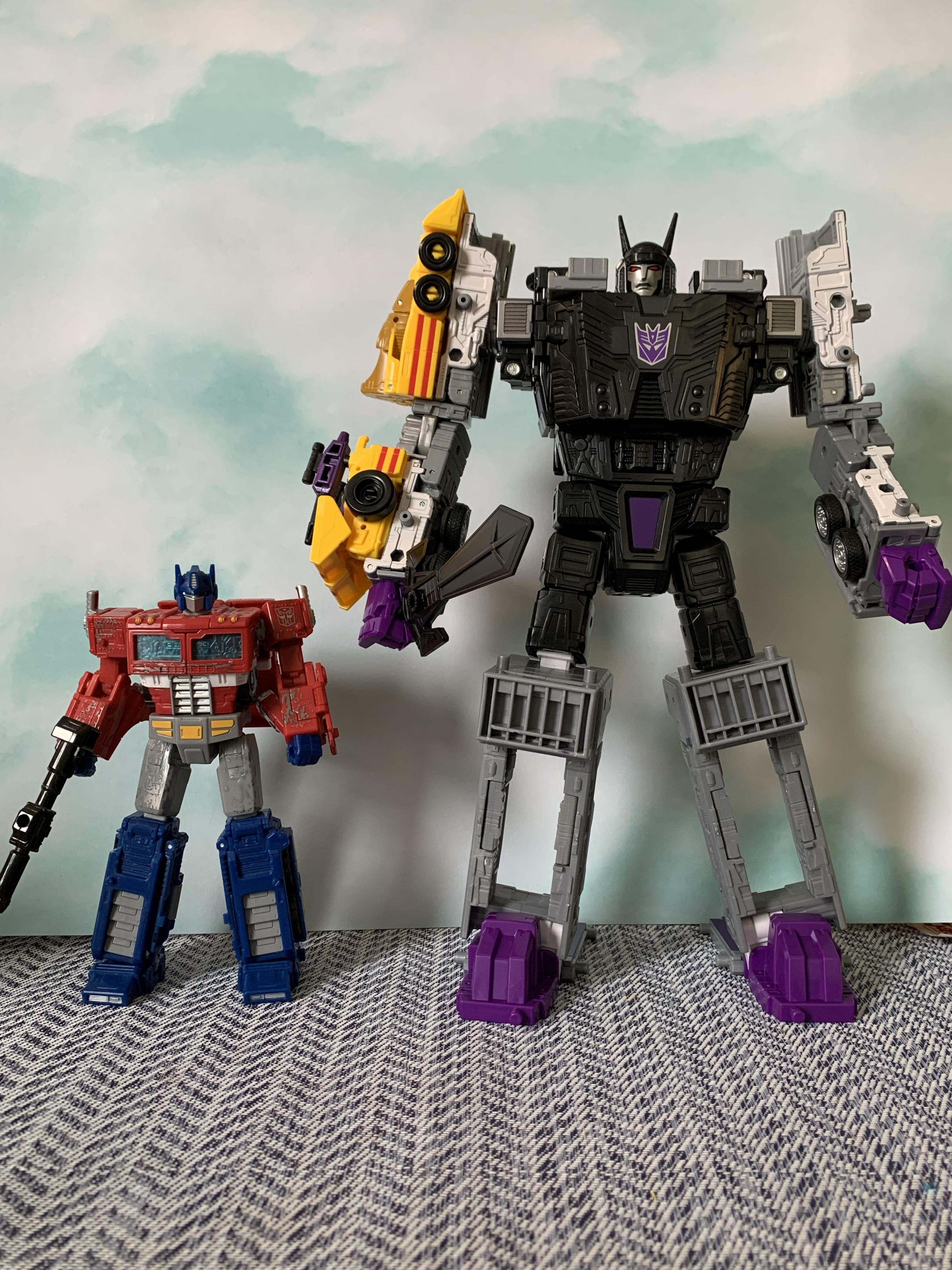 New clear images of Point Blank’s robot and alt mode show that he doesn’t come with his blue spoiler shield. I am disappoint. Peacemaker seems to be a new mold though, VERY evocative of his original design. Not as well articulated as the other Battle Masters though. I might wind up caving on an upgrade kit, which I rarely do. But I hope someone comes up with the spoiler shield and a G1 toy head.
Top

Walmart delayed their Velocitron orders to mid October. Meanwhile Pulse is shipping theirs now. Hoping Cosmos goes back in stock somewhere. I found Road Hauler in person, reordered Blurr and Skids repaint from Pulse. Will wait on Road Rocket and the other voyager.
Top