Nice wave I am for sure getting Megatron and Grimlock
Top

I pre ordered Megatron, Grimlock, and Tracks. I really don't know if I NEED Tracks. I know I want to collect the main characters or personal favorites from the 84 Cartoon. But I pre ordered him because he does look cool, and I LOVE the Blaster in cassette player form accessory lol. And if they ever make Blaster, I'd like to have that little cassette player to go with him.
Top

I ordered Bludgeon and Grimlock. Bludgeon because I plan to put him alongside my regular TFs (assuming he's not too tall...), and Grimlock because GRIMLOCK.
Top

watching the previous vid of the prime proto again and looking at the wave 2 stuff… I really want to go for these, but I think they’re about 20% off what I’d personally want articulation wise. It seems pretty certain at this stage the waist skirts don’t have any workaround for forward hip movement and that the ab range will be super small (megaton perhaps excepted). Same with ankle rocker range on a lot of em. I think the shoulders would articulate better if they had the joint cut into the top of the ‘bicep’ rather than on the torso to - they won’t be able to swing their arms wide whilst facing forward with this solution. They seem a bit squat compared to the animation models too?

Not wanting to rag on em tho - I get what they’re going for and there’s loads I really like. love the glass beaker with megs - that scene in the return of optimus prime really stuck with me! Would personally have preferred a toy head over the emerging drinking one, but that’s a nice choice too. Just wish for my own preferences that the articulation choices were different. Hopefully they tweak their approach to find more of a middle ground as they go, or I can pick up some where the animation model allows for better cuts. I’m super interested in the gi joe ultimates so would like a couple of these too if the articulation stars align.
Top

Avon wrote: ↑
Fri Jul 30, 2021 9:42 am
Would personally have preferred a toy head over the emerging drinking one

100% agree. I know they're going for the cartoon look and it captures that well, but throwing the toy head in like they're doing with Optimus would have been nice.
Top

I like 'em as-is, but I do wish they'd included a Marvel-style, black-helmet Megatron head.
Top

PantherCult wrote: ↑
Thu Jul 29, 2021 7:59 pm
So, I thought I'd be into Grimlock - who doesn't love a Robotic T-Rex? But this sculpt looks a little too Robot Barney to me- he is very round... looks almost like a Dinosaur is stuffed in one of those circus cannons.

Was hoping he'd look a little closer to this: 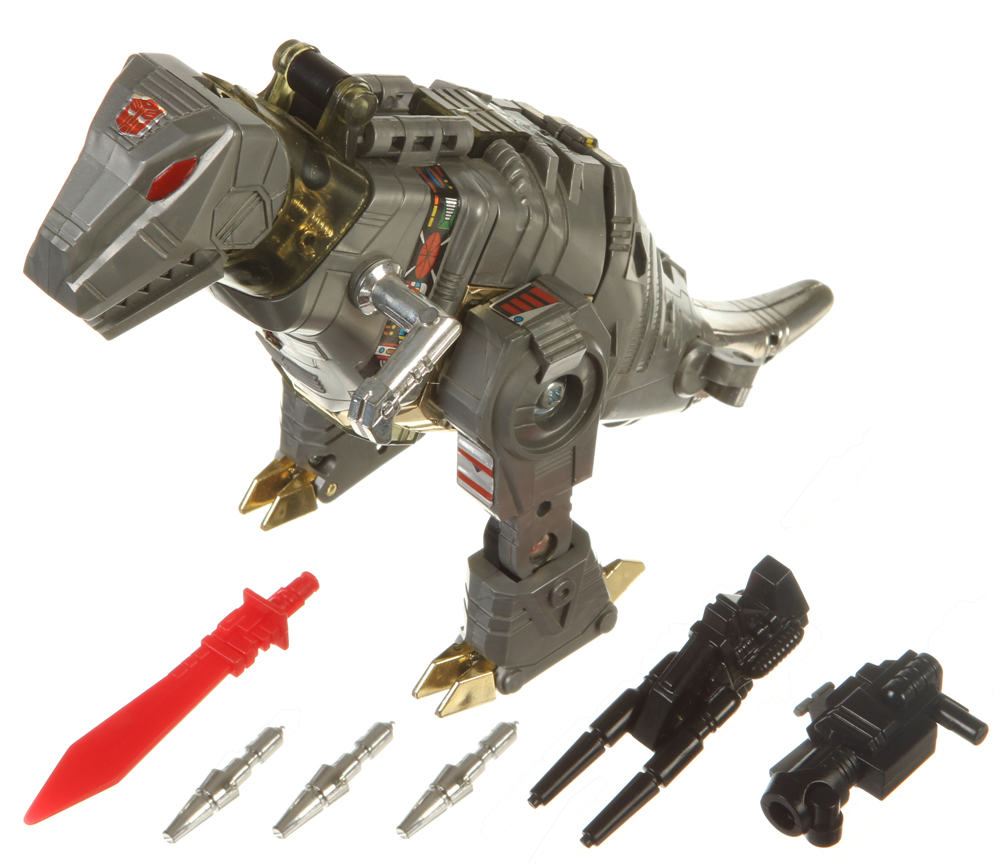 Of these 4 I will only be ordering Bludgeon. He'll serve as an excellent Robot Skeletor in MOTUC display.

This line isn't doing toy looks, so hoping for an updated toy look. This Grimlock looks he jumped right off the screen.
Top

This line isn't doing toy looks, so hoping for an updated toy look. This Grimlock looks he jumped right off the screen.

OK... I didn't much watch the Transformers cartoon - wasn't my bag. I've never been a transformers fan and owned zero Transformers as a kid. So I wasn't intimately familiar with the animated design for Grimlock. I was just hoping for a cool robot T-Rex. This figure is not that. To that end the Power Rangers Ultimates Dino Zord is a much better fit for what I wanted.

I'm not even mad at it. I can use fewer $55 figures from properties I don't care about. I will be intrigued to see what they do with Alligatorcon. If they go with the animated look like this: 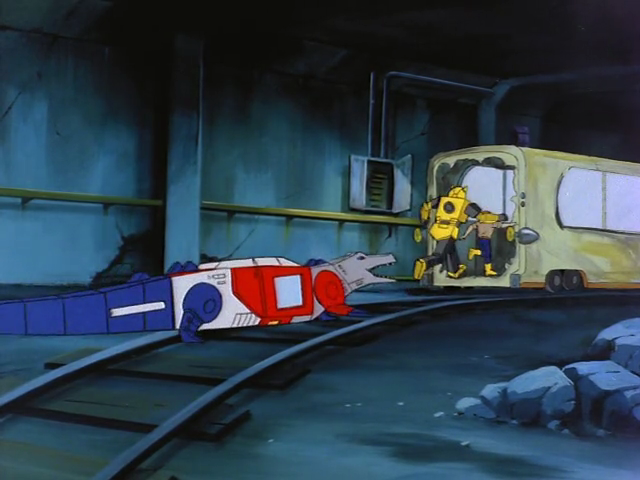 I'm hoping Megatron won't look too out of place with my Kingdom figures. He seems like the right scale.
Top

I’m still trying to decide if I want to go in on this line. I’m not sure how I feel about transformers that do not transform. Super7 has me on Thundercats, Silver Hawks, Turtles and G.I. Joe. I wasn’t impressed with wave 1 of transformers, but wave 2 I’m tempted and it’s Tracks that is getting me. This line if I got any, I wouldn’t be all in, just prime, megaton, tracks, bludgeon and wreck-gar in wave 3.
My biggest issue is how many have said no thanks to a Super7 line and then the figure comes out and people wish they would of purchased the figure. Stinking fomo
Top

Personally I don't care if they don't transform. I'm going to display them is robot-mode on the shelf anyway. And just having Transformers, GI Joes, Ninja Turtles, Thundercats, and Masters of the Universe in the similar scale and style is appealing to me. With the exception of Real Ghostbusters, that's all the cartoons I collected figures for as a kid.
Top

I would be very much down for Ultimates Real Ghostbusters. I think that's the only format that would really do them justice. A ton of accessories, neutrona beams, ghosts. I really hope that Flynn has something planned for them.
Top

I do have the Diamond Select versions of them which are also 7 inch scale and I think will work in my '80s display just fine.. but still I'd replace them with actual Super7 Ultimates to match the rest of the figures if given the chance 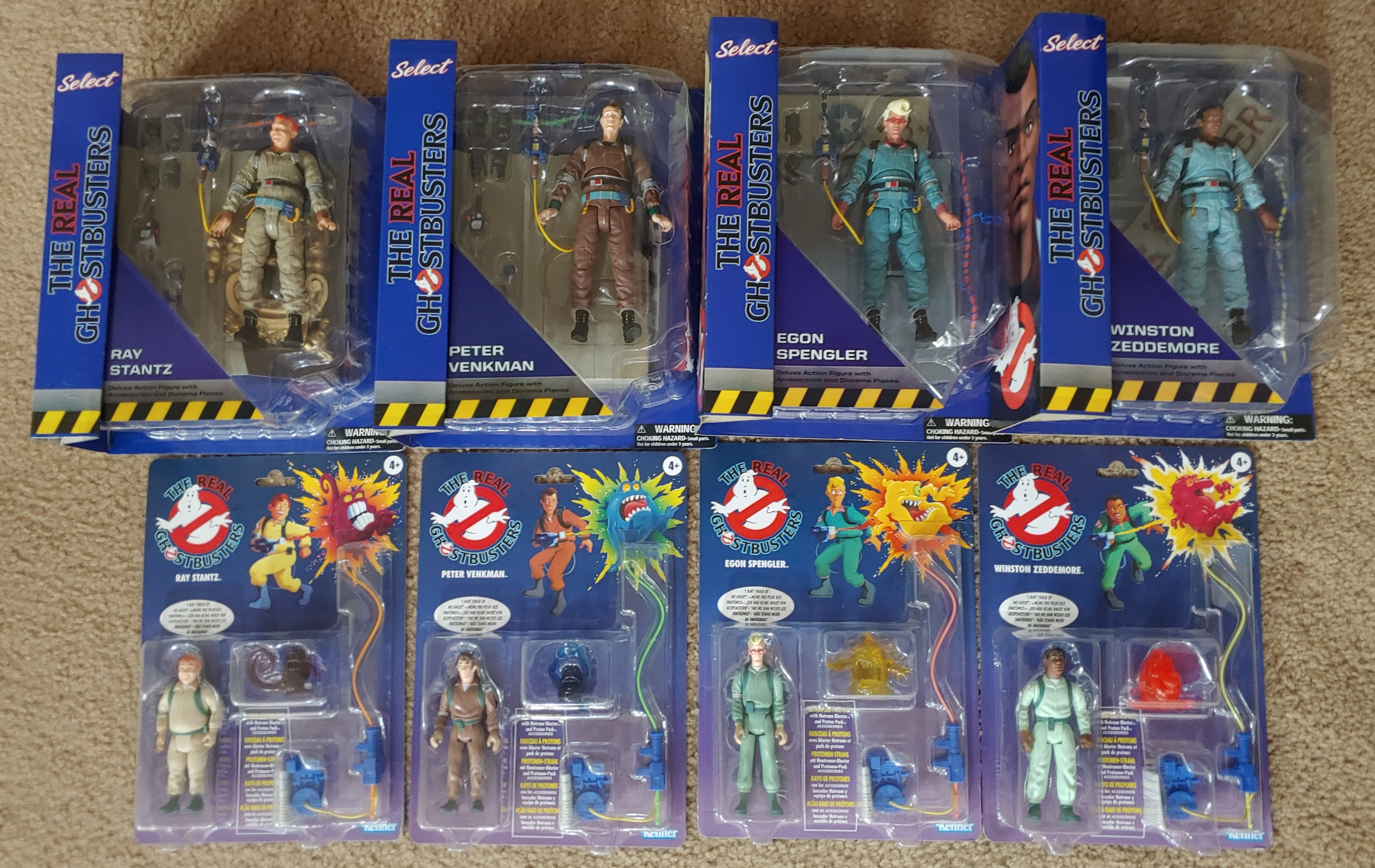 I’m good with the transformers that don’t transform side of things, but there’s a few things about these that has me holding off for in hand reviews. Partly it’s because they don’t seem super accurate to the cartoon models - a bit stumpier than the long legged, small headed models. I say this as someone who’s spent a LOT of time looking at those models! Something that seems a bit telling is that for cobra commander they include a second head just for the stripe, but optimus doesn’t have a season 1 head option (absolutely love the toy option though). And I’m not even that fussed about them having to look a particular way/match the models, more that this take doesn’t quite hook me. Might be that they’re looking for them to fit in with the look of the other ultimates lines though.

The other thing is the articulation - i totally get super7’s ‘don’t compromise the sculpt’ approach (even if it wouldn’t be my own preference), but that adds a lot more challenges articulating tf designs than humans, say. For example the hip skirts are always going to be heavily limiting leg range if you’re not wanting to cut into them. And shoulder wise it looks like they’re putting the joint in the torso not the upper arm, if that makes sense, so that means no visible cut on top of the upper arm, but limits the axes it can move on. Again, I get the approach (I like a lot of the stuff they do), but I think transformers might be particularly limited in terms of posing. Hopefully I’m wrong and they come up with some clever solutions or that they find their audience anyway.
Top
Post Reply
84 posts