There are leaked photos of 4 new repaints coming out. A snow Panther repaint of Cheetor, a Waspinator repaint, and a couple of cars I didn't really pay attention to cause I'm in it for the Beast Wars stuff. The Cheetor repaint has the original Cheetor head, not the mutant one, and the Waspinator repaint has a new head resembling the OG Waspinator promo shots from back in the day. As far as I could gather, no one knows when they'll be actually coming out, or how. May be excluisve to Target? Or something. Alot of the comments were kinda just bashing the whole exclusive thing in general. Especially Wal Mart. But I think Target exclusive was floating around.

The Silver Bluestreak is probably going to come in the Buzzworthy Bumblebee packaging with Target. The black repaint/mold of the Amazon exclusive Earthrise Ironhide being called Guard May be another Amazon selects exclusive.

The grey/yellow Cheetor and white/red/purple Waspinator with the toy head may just be more selects offered with etailers. I don’t think they are exclusive to Target. But there are better sources like Slag Podcast or TFW2005.

They all look cool.

Pulse notified me that they Kingdom packaged Soundbaster is shipping. So if you got that order in you may see it soon.

Nabbed Blaster at a local Target yesterday. They also had Tigatron on the shelf mixed among a bunch of Wheeljack and Tracks.

I love him. As opposed to the Bumblebee movie Soundwave, this guy might actually see a transformation or 2 before going on display.

Blaster can now hang out with Studio series Rodimus and Wreck-Gar.
Top 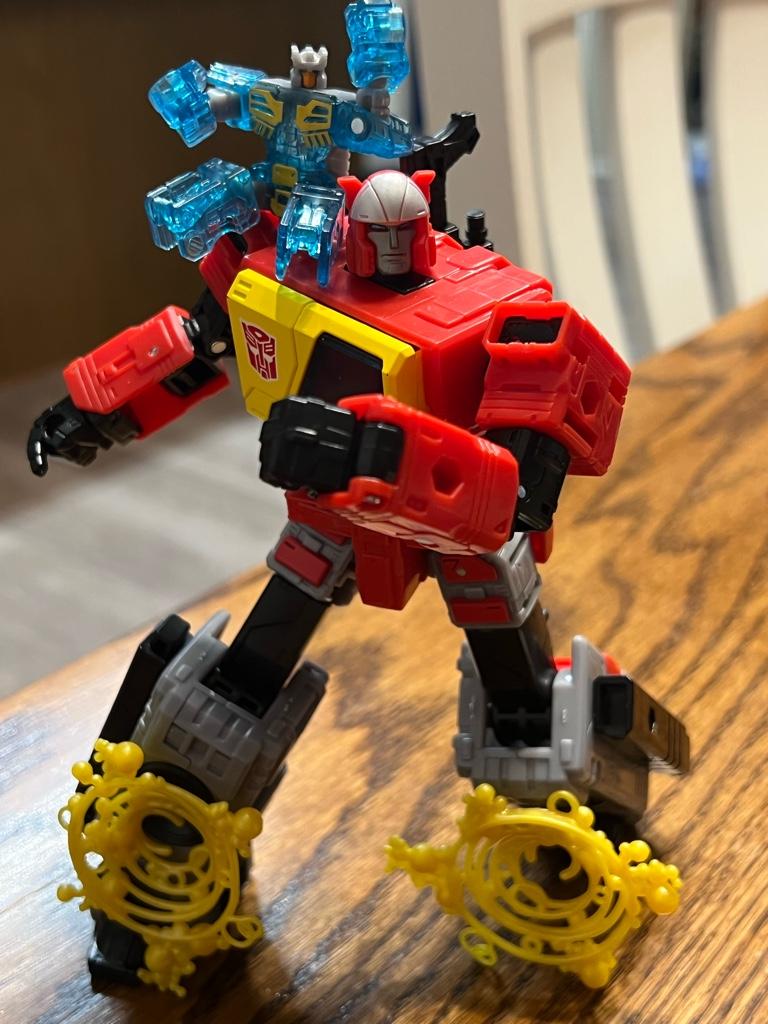 This action figure is so much fun to pose around. Looks so good! Blaster’s right hand almost looks like he is snapping to the music he’s obviously blasting from his speakers. Marvel Legends effects kind of work for that.

I know it’s a finger to push the eject button for uhm Eject. Eject also looks like he’s jamming on his shoulder. Too bad Hasbro can’t give Eject some guns. I’m sure there are 3rd party guys working on it. 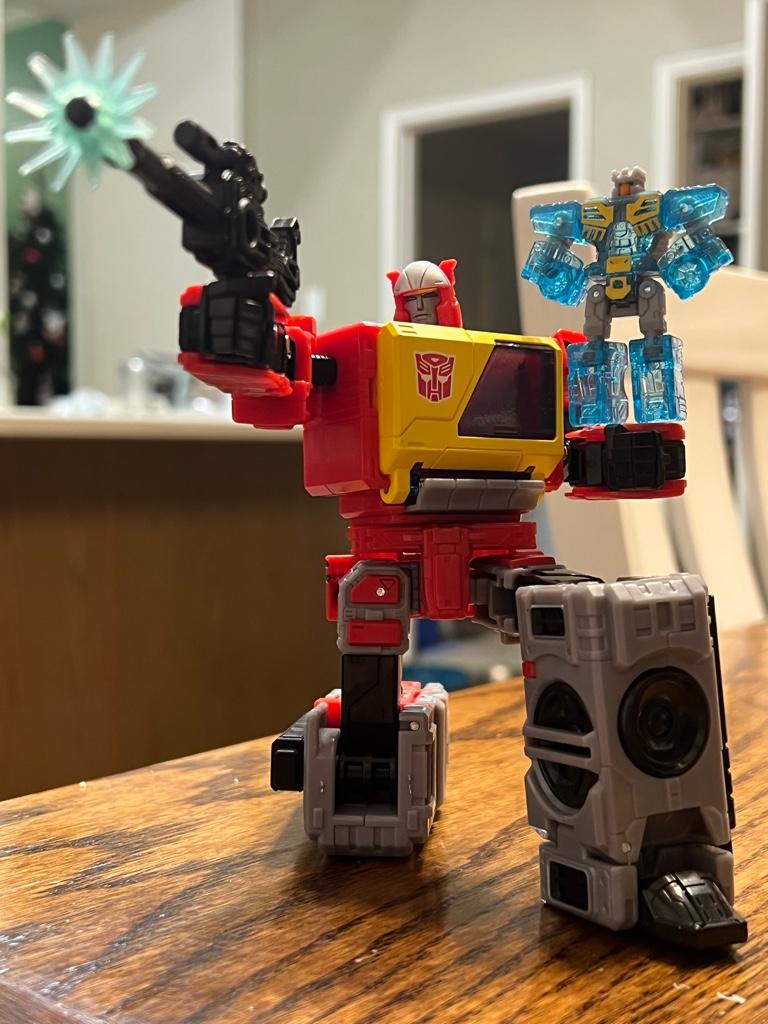 I really want the beast cassettes! Ramhorn and Steeljaw two pack please! But it’s Hasbro they will do Rewind with Steeljaw or Ramhorn….Ah Hasbro always stringing us along.

Oh and I am really thrilled about the possibility of a Legends or those little $10 figures of Blaster like they did Soundwave. Surely it’s coming… 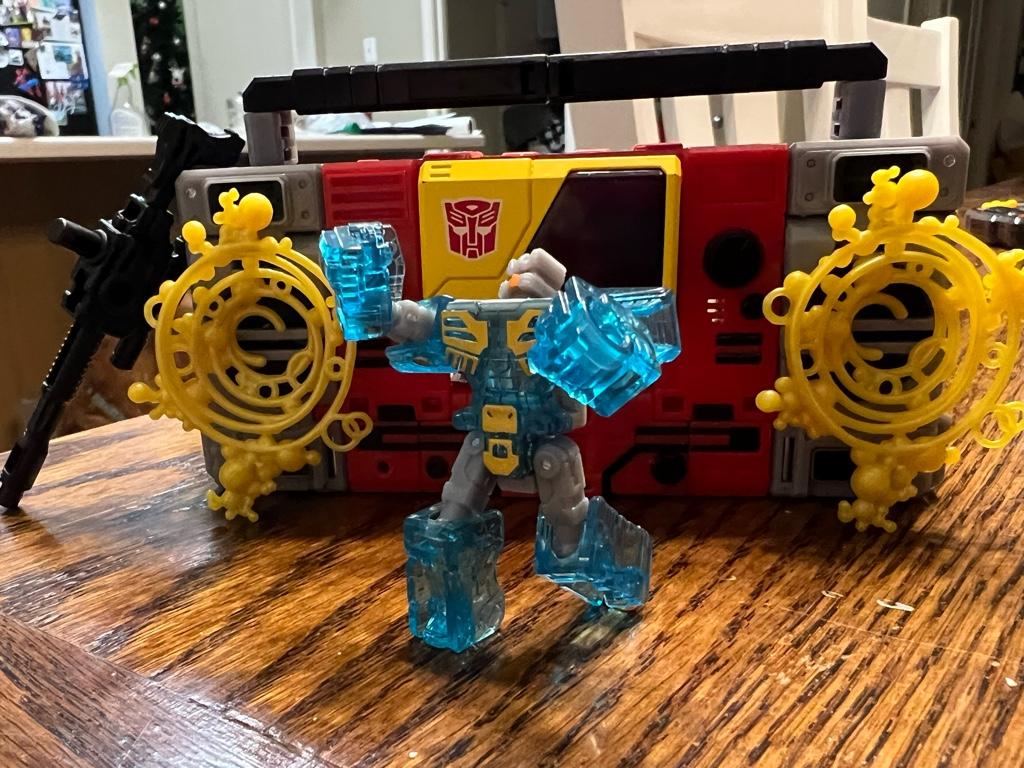 Such fun pics, Prophet! Can’t wait to get Blaster and Eject!

Pipes and Slammer arrived via BBTS. Pipes is fine, I already have Huffer and Puffer, so this one is the same. Slammer is cool. I really hand it to the guys who design these weaponizer figures. So many configurations, I’d never be able to memorize the sequences to convert them. If I really took the time, I’m sure I’d have a ton of fun just messing with them. This guy is ready to join Metroplex.

Still waiting on Pulse to ship Blaster. Or Dorkside or BBTS. Or to find it in person because I’m buying it on sight.
Top

Blaster & the Alley Viper arrived, but the entire order (including a BAT) still shows "Unfulfilled" on Pulse, lol. K.
Top

Did you get any kind of ship notice or "your order has left the building" email for those two? Or did they show up with no warning?
Top

Nope. Showed up without warning (in the same box - all three are the same order, also odd that the BAT was a no show).
Top

Well, I got a FedEx ship notice for what I thought was Shattered Glass Starscream, but it was my order with Blaster (and Alley Viper, Fennec Shand, Boba Fett, and Rogue One Stormtrooper). My desk is looking more orange right now!

Blaster, 2 Alley Vipers, Boba Fett, & Fennec Shand arrived today without notice. Still no B.A.T.s. I have to admit, it was kind of nice receiving everything by surprise.
Top

Finally opened up the Ark and Mainframe. Really cool Titan-class figure! It’s such fun to finally have the Ark. I like the details like how you can see the computer screens through the bridge windows. Love that it comes with a mini Optimus Prime, too.

And I loved the action master Mainframe back in the day.

These Titans are a lot of fun for playtime with the kids, too! 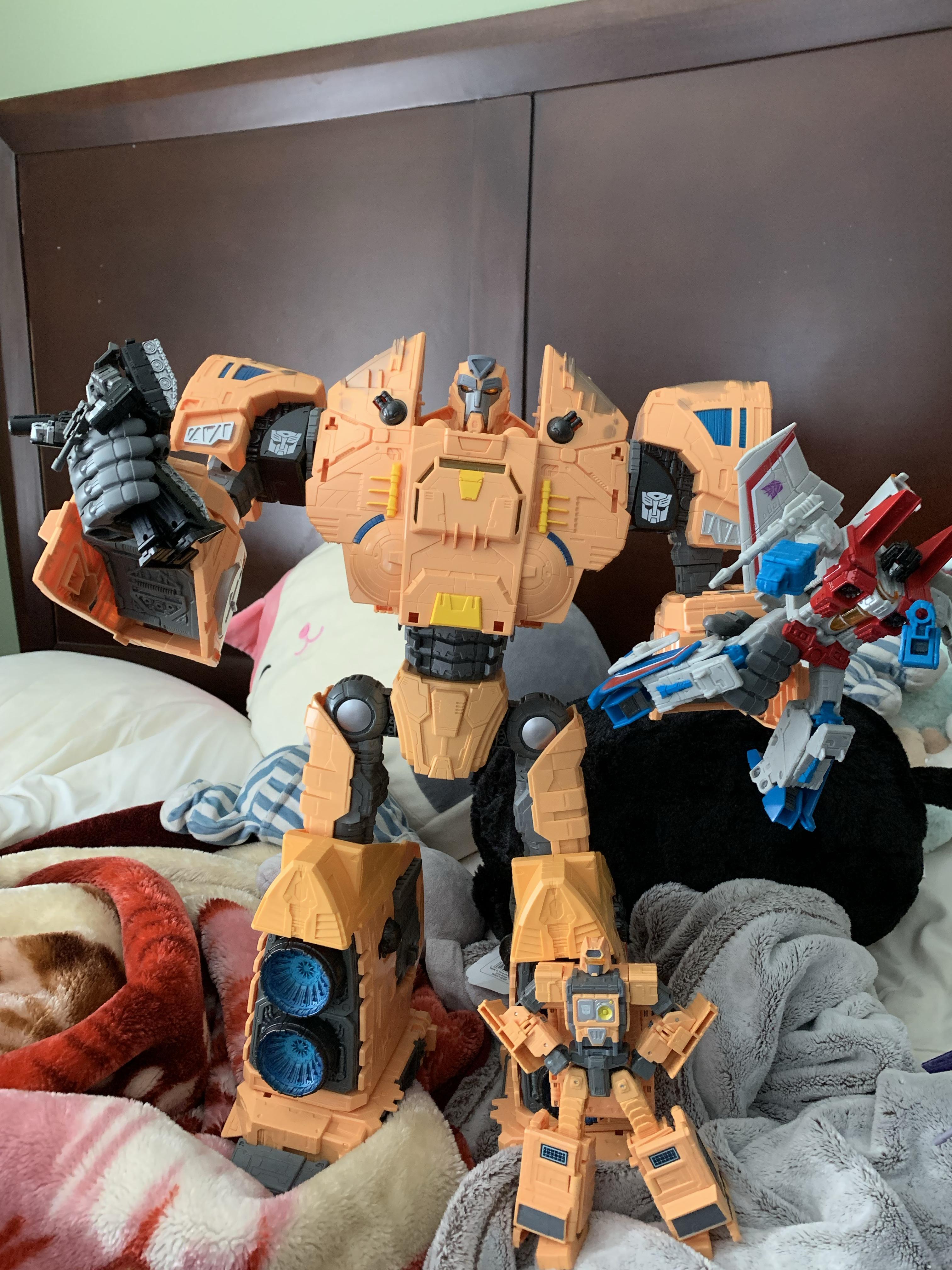 Scored Tigatron the other day and Mutant Tigatron came today!

I also got my mutant Tigatron in the mail. I wouldn't say perfect. But hes about as good as the normal one. Same flaws. Head looks to sit too far forward. Annoying gap between his shoulders and torso. And he also came with his face lines painted off to the side a bit like the normal one I got. I wonder if they're all like that. I repainted the face lines and sealed all his tiger face paint because I know that's gonna rub off or chip if you transform him too much. Just like Cheetors did. The mutant head does look different. I'm not sure I like it on either Shadow Panther or this. I'm glad the heads aren't just the same repainted like the snow leopard will be later this year though. But I'm not entirely sure the mutant heads were the way to go. Funny though, Shadow Panther was supposed to have a head identical to Cheetor, and the figure doesn't. But Night Prowler is getting the same head. So odd. At least almost all these repaints are getting new heads. Big plus. Buzzsaw, the Blackarachnia repaint in the 4 pack, Sandstorm, Skywarp, Grimlock... even Nemesis got a new head, even though it's only a masked version of the normal head.