No kidding, Jeff Bezos stepped down today, he knew there was no recovering from the Transformers Exclusives Debacle of 2020, haha.
Top

My PO for Siege Jetfire and Omega Supreme have processed at BBTS. Checking right now, they have a few Jetfires and plenty of Omega Supremes listed as in-stock in case anyone missed out on those two.
Top

Ohh nice. Was it also you who got their backorder for Dirge/Ramjet fulfilled by Amazon UK? Looks like your catchup is going along well. Omega and Jetfire are really great figures. Are you still missing any key Siege or Earthrise figures?
Top

That was me on the Amazon UK Ramjet/Dirge. I'm still shocked that that showed up. I was hoping that they would hit BBTS like several other exclusives have recently, but I was not confident that the Amazon order from last September would actually get fulfilled.

Having said all of that, tracking info did update and it's been shipped from Germany and it'll be a week or so until I receive it, so hopefully it is actually Earthrise Ramjet/Dirge. That would be a bummer if there is some sort of mix-up.

Lastly, thank you for asking. I feel like I've managed to get current with my wishlist. I'm waiting on POs for Hot Rod, Scourge, Cyclonus and Grimlock but I'm not worried about those. There are some pre-War for Cybertron figures that I'm interested in that would still fit well. I keep an eye out for a decently priced TR Blitzwing (he doesn't seem to be too bad) and Top Spin and Twin Twist (those two are kind of pricey now). I'm hoping they get re-released like the Clones and Headmasters did.
Top

If I had to guess, Topsin and Twin Twist would most likely get a rerelease but I’m thinking that Blitzwing will get a WFC style release at some point along with autobot Sandstorm. I mean if Astrotrain and Springer are here......
Top

I ordered Siege Jetfire back on 8/25/20 and Siege Omega Supreme on 9/10/20 with the hope they could be part of my son's Christmas presents. Well, that time came and passed without them coming in stock in time. They finally did come in and were delivered on 2/27/21, fairly good timing for my son's BDay a week from now. It's been amusing waiting this long as "our" WFC collection is really his collection (which he has really been in to for a while now), he does enjoy the War for Cybertron series and has mentioned from time to time how he would love to get Jetfire some day, all while I know that eventually these two would come in. Well, one week to go, I have to say I am pretty excited for these gifts!
Top

That’s awesome, sepster! You and your son are in for a treat! Jetfire and Omega Supreme are excellent. Jetfire is surprisingly huge.

Omega Supreme has a ton of play value. My daughters love him in both modes. That space station mode has so much play value for all the various vehicles and mini cons.

That's sweet that you guys can share this stuff with your kids. My kids have ZERO interest in collecting anymore. All they do is play Fortnite and Roblox.
Top

My boys are 8 and 5 and I definitely encourage them to play with physical toys or run around outside as much as possible. Outside of our phones (the wife and I), I haven't bought a gaming system since PS2 and I very rarely play video games, so I'm holding out hope that the boys continue to enjoy doing the things that don't involve screen time. It probably helps that they see me really enjoy collecting and displaying both new stuff and the toys from when I was a kid and all of that is something that we can all share doing. And they also have some avenues for hobbies that don't include collecting and toys. I have a '79 Bronco that I've been restoring over the past couple of years and my oldest has helped change the oil and wrench on that with me before and they're always somewhat interested when "Dad's out in the workshop."
Top

My son is 9 (grade 4) and used to be into the figures. He was really into TMNT and had his own Star Wars and Marvel figures (the ones that mix and match parts). I also would give him my TFs that would become obsolete in my collection thanks to updates like War for Cybertron. But the year Santa got him the Nintendo Switch, that was pretty much it for toys. He never looked back. Gaming at least keeps him somewhat social with some of his friends from school since we've all been home for a full year of pandemic.

My daughter (6, grade 1) kinda liked toys, but she mostly just likes opening them. She forgets all about them once they're loose all over her room. And she really has the worst taste. It's all about unicorns and LOLs, and I've TRIED my hardest to get her into superheroes and Star Wars (DC had that awesome line of teenage versions of the female heroes, and she really liked Princess Leia for a while) but she is now neck deep in Roblox and the crap that comes with it.

It bums me out. Lately there have been so many stories here of collecting with kids. I WISH they'd play with toys more and use their imaginations. But in some ways, I'm glad they're not inheriting my vices. They definitely won't want any of this crap when I die.
Top

I have no idea what Roblox is.

NORM, as long as your kids are doing stuff they enjoy, that's a win. Maybe they regain interest in their toys in the future. I definitely remember my interests coming and going when I was kid. Sometimes I was all about GI Joe, then baseball season started and all I wanted to do was be on the field, then a friend got a new Nintendo game and I could think of nothing else, then it was time for street hockey, then it was off to the next Boy Scout camping trip. In the end though, I did always find myself drawn back to comics and toys.
Top

I don't think the passion for it is there for them. Growing up, I didn't play sports. I came home from school, watched cartoons, and played with the toys that the cartoons were based on. They don't really have those half hour toy commercials to fuel the love of collecting. They are into the media today's figures are based on, like the MCU and SW universe. But they don't seem to gravitate to that tactile experience of having small versions of those characters in their hands and reenacting scenes from the movies. It's fine, they don't have to love what I love. As long as they continue to be good, caring people, I think we're all on the right track.
Top

Siege Red Wing is back in stock at BBTS in case anyone (like me) who missed him the first go-around:

You know for just being a simple repaint, I'm surprised there hasn't been a Siege Moonracer yet...
Top 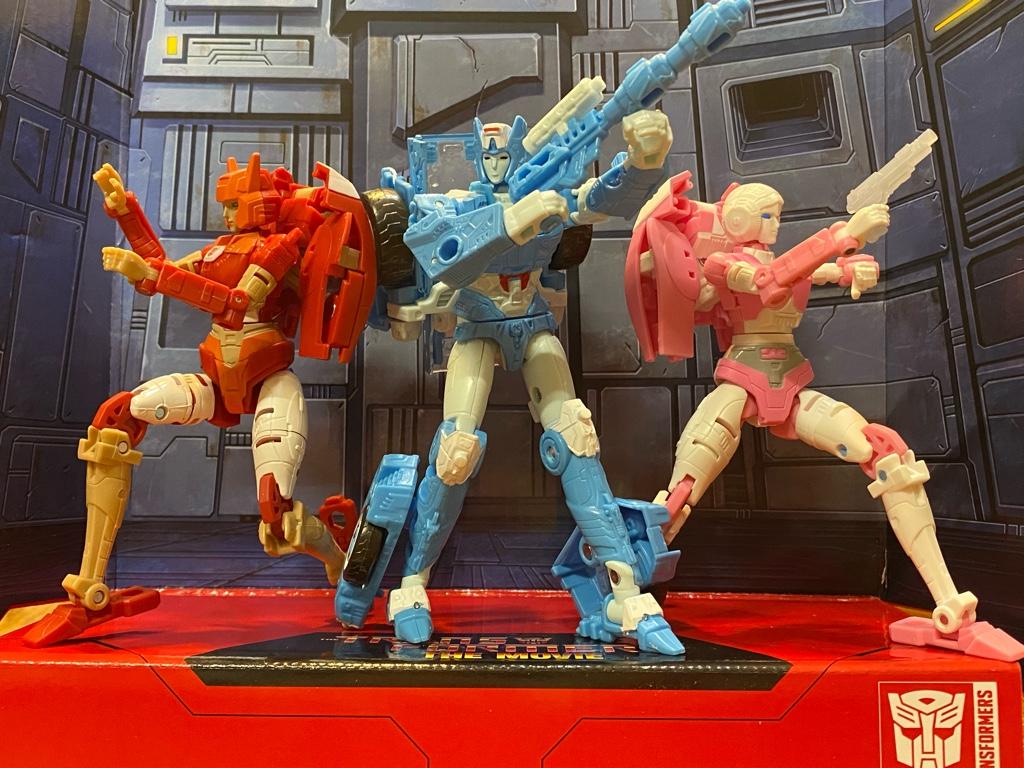 Chromia is ticked some of her useless kibble can’t be detached too.

It’s kind of fun to have these three ladies but Chromia stinks to stand. Her leg wheel fenders kind of help. 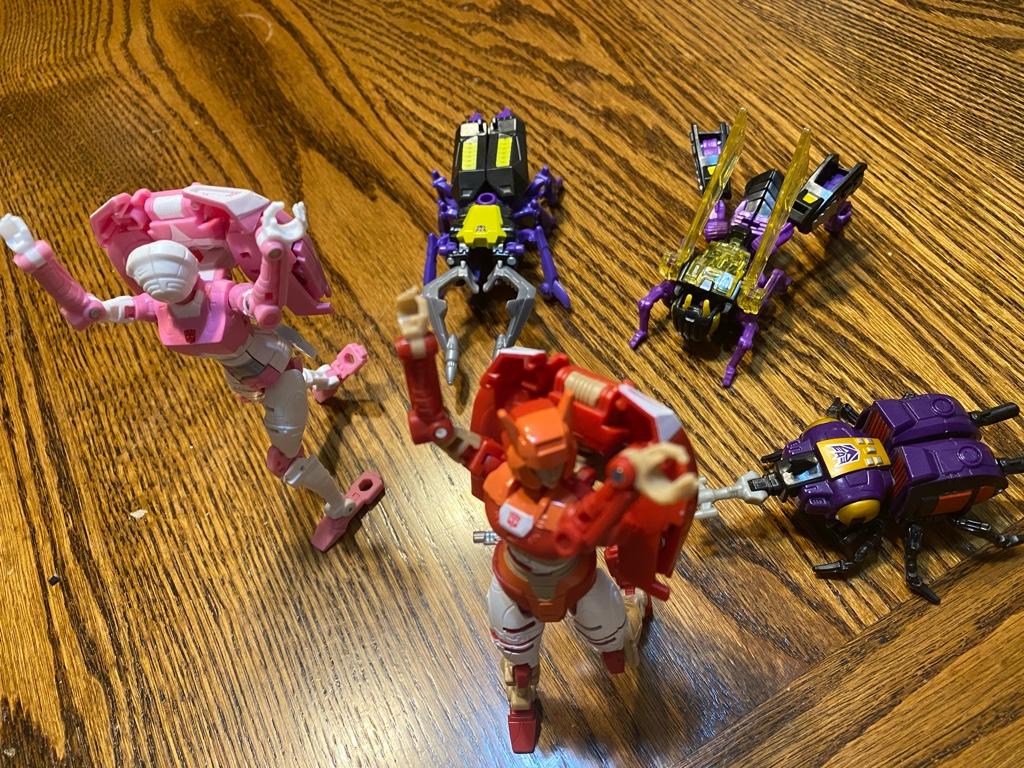 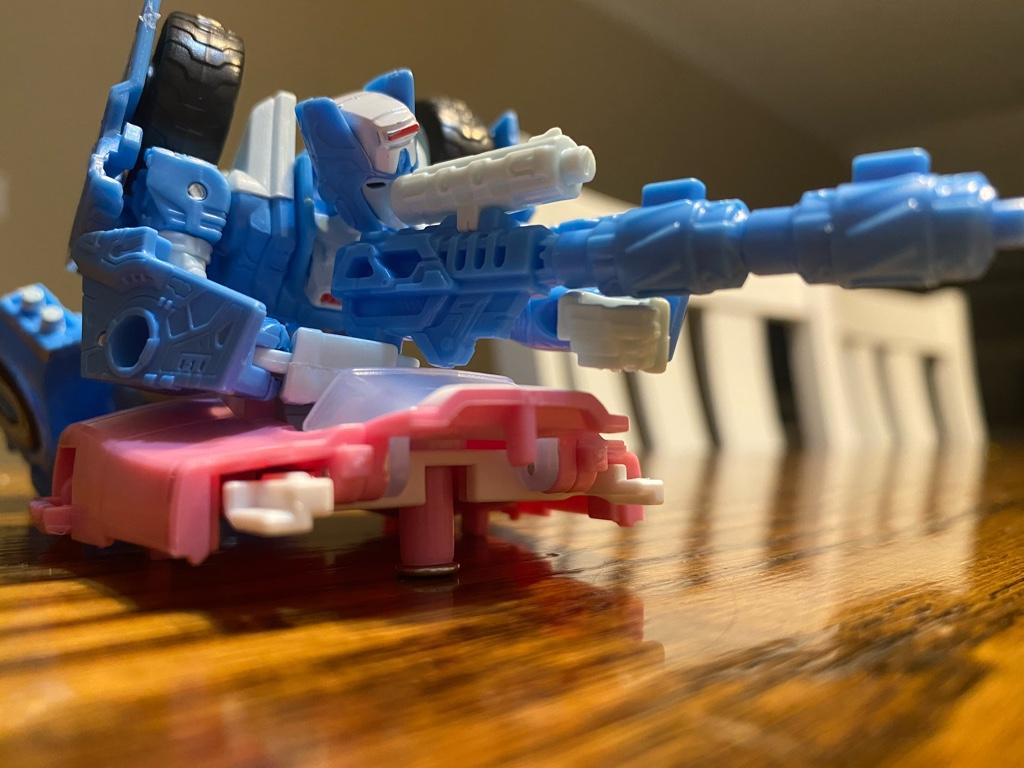 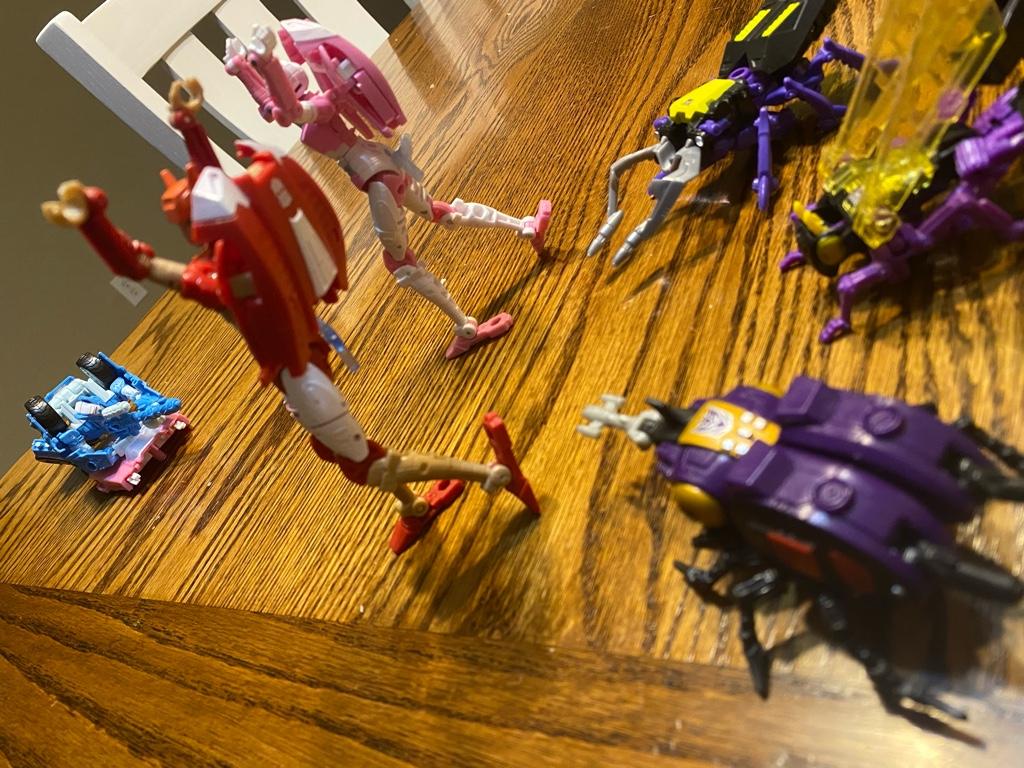