Begins? That could easily have happened the same way with packaging that has a plastic window. That's blatant theft, and it's been going on since the dawn of time.
Top 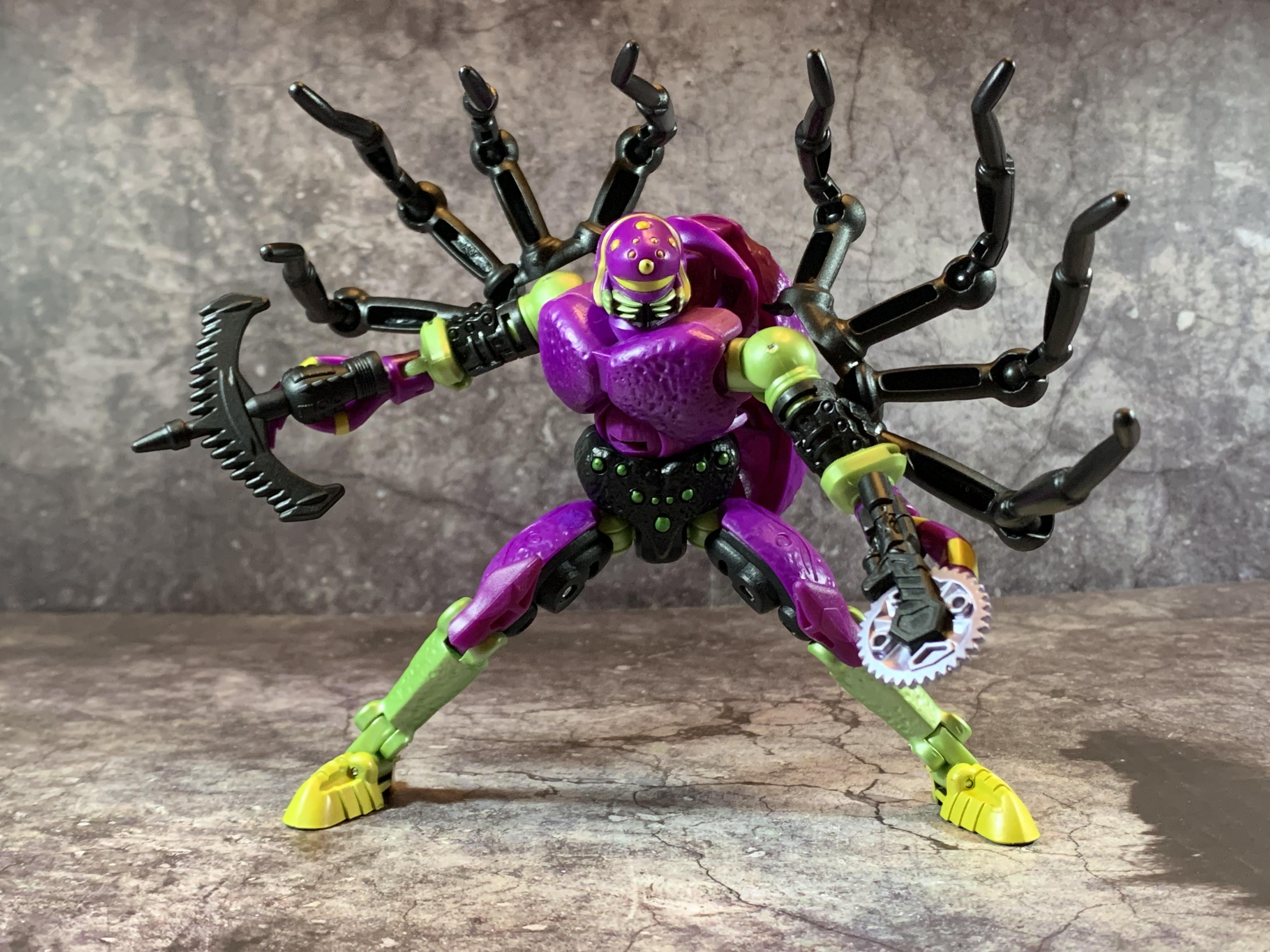 Love Tarantulas! He was my favorite villain in Beast Wars. Such a fun mad scientist/spy character. This Legacy version is fantastic. Finally gives Tarantulas a show-accurate head sculpt. Excellent articulation. I love the ankle rockers. And he even has backward butterfly joints in the shoulders. I like how his spider legs are all articulated so that he can pull off his coward facing leg-gun attack as well. In terms of accessories, it’s fun that he got his original grappling hook missile gun as well as his Transmetal weapon—the buzzsaw.

NORM wrote:Begins? That could easily have happened the same way with packaging that has a plastic window. That's blatant theft, and it's been going on since the dawn of time.

This is true. I guess it just makes it more annoying that I haven't seen it in a long time but I did now that the new packaging hit.

Found a SS86 Arcee that looked like someone tried to steal, because her head & torso were outside her window because of the hinges for transformation, lol. Guess she was strapped to the inner cardboard too well, or they got caught. I restored her bot mode for the next person, lol.
Top

They'll get around to the Transmetals one eventually, considering they said those are on the docket for next year. Hopefully they will be rereleased vac metal versions, but if Dragon Megs is any indication, it will probably be all new, possibly side grade, molds, without the vac metal. He looks good, but he doesn't look amazing. I think the vac metal would've improved it quite a bit. But alas, they did not do it.

Vac metal is fine in the short-term, but I have SO MANY Transmetal figures where the chrome has flaked off, and it destroys them. I'm all for metallic paint for every transformer going forward.
Top

I only had it happen to Rattrap, and I bought them all when they were first released. He seems to be the biggest offender to it. None of the rest have flaked off, but there are a few knicks and chips here and there since I played the crap out of with them when I was younger, and they were in storage for a bit of time too. I know of some T1 Megatrons just crumbling to pieces, but I never managed to get him so I can't attest to that. Supposedly when I was reading about it, the chipping only happened because they weren't sealed properly at the factory, like they do with paint, and that's why rattrap is the most common for that, because apparently his whole run probably wasn't sealed properly. But I can find a ton of figures on Ebay and such places that still haven't flaked. Alot of the old Kenner 3P0s were Vac Metal too, and all mine have held up as well. It probably just depends on how it's been taken care of, and maybe stored. Although mine were stored in a bin under a trailer for a while (which I did not know about until I actually went to reclaim them). So... I'm still down with Vac Metal. But I would take metallic paint as a concession. They haven't seemed to be doing that with most lines though. They've been using this pearlescent plastic with glitter in it and such. That won't work for Transmetals, so definitely not that.

I'd be very happy to never see vac-metal again.
Top

I guess I just have a fondness for my old toys I used to play with all the time, and don't like change lol. As long as the new ones are shiny, I'll be ok. The new Dragon Megs does not look shiny.

I thought that process was hazardous or something, which is why it's so uncommon to see it anymore.
Top

I never read anything about that, but just about everything is hazardous these days lol.

Tarantulas still eludes me. I’m sure it will make itself known soon enough.

My Tarantulas from Amazon showed up yesterday.

I love the sculpt and he's fun, but is it me or has the plastic quality dropped drastically from Kingdom?

His all black weapon has a ton of flashing on it and his spider legs just look cheap.
Top
Post Reply
602 posts