NORM wrote:Wow, that's a really old list. We are getting or have gotten most of those requests by now.

We knew some were already coming via leaked retailer listings at the time of the poll. Well, some of us did. Blaster and Perceptor were known about- they were wasted votes.

I’m sure I wasted a vote on Blaster. But we’ve seen images or preorders for Needlenose, Flamewar, Pointblank, and I thought I saw Tarn on a rumor list. So that poll was a better predictor than I had.. predicted.
Top

This is what is known to be coming in Generations Legacy 2023 so far. Still deluxe spaces for sure. And Wave 2 of Velocitron as well as these. 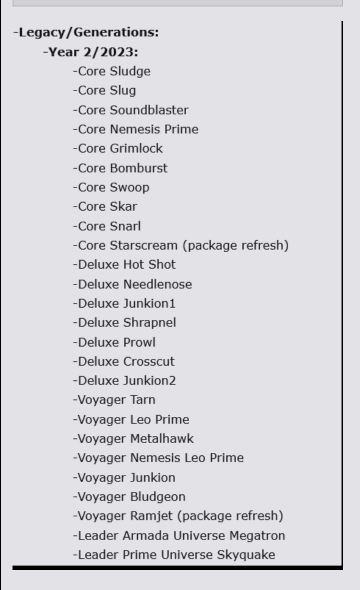 Did anyone figure out what Junkion was code for?
Top

I love the core class stuff and am rereading the uk marvel comics, so pretty hyped for those dinos