Masters Of The Universe Origins

I HAVE THE POWER! - Masters of the Universe Classics, MOTU200X, the vintage toys, PoP and yes, even NA - talk about them in here!
Post Reply
3548 posts

I think it is safe to say Eternia will go up in value quite a bit.

First it is a holy grail item that was impossible to get originally, unless you wanted to pay $2000+ on the secondary market.

I could see the full package Eternia (w/King Grayskull and Moat Monster) being under 7,000 units easily within a couple months of them shipping.

Then look at the Sail Barge and Unicron from Haslab. Both of those were large, expensive projects, with low backer numbers, and were pretty close in price to Eternia. Unicron actually sold more units than Eternia (10,000+) and the Sail Barge was less than Eternia (5000+ but I think close to 8,000). The secondary market on both of those is crazy (around $2000US sealed).

So barring some crazy change in the collector market (think the collapse of Beanie Babies) Eternia will be, easily, double the price on the secondary market.

I'm also falling behind on the Origins line. I am caught up to the Sun Man wave (excluding some early misses), but nothing since. Both due to the lack of new waves at retail (Canada) and missing out with online retailers here as well. I hopefully get caught up in the coming weeks.
Top

I don’t think Eternia is nearly as iconic as the other Haslabs you mention. It’s appeal is surely almost entirely based on how rare the original was. And 10k of this new one is a large chunk which can potentially appear on the secondary market. I don’t see it going up much on the aftermarket. Then again, I’m surprised this funded as quickly as it did, as I find it to be expensive and nigh-hideous.
Top

Origins came today, like it better than the Classics version. 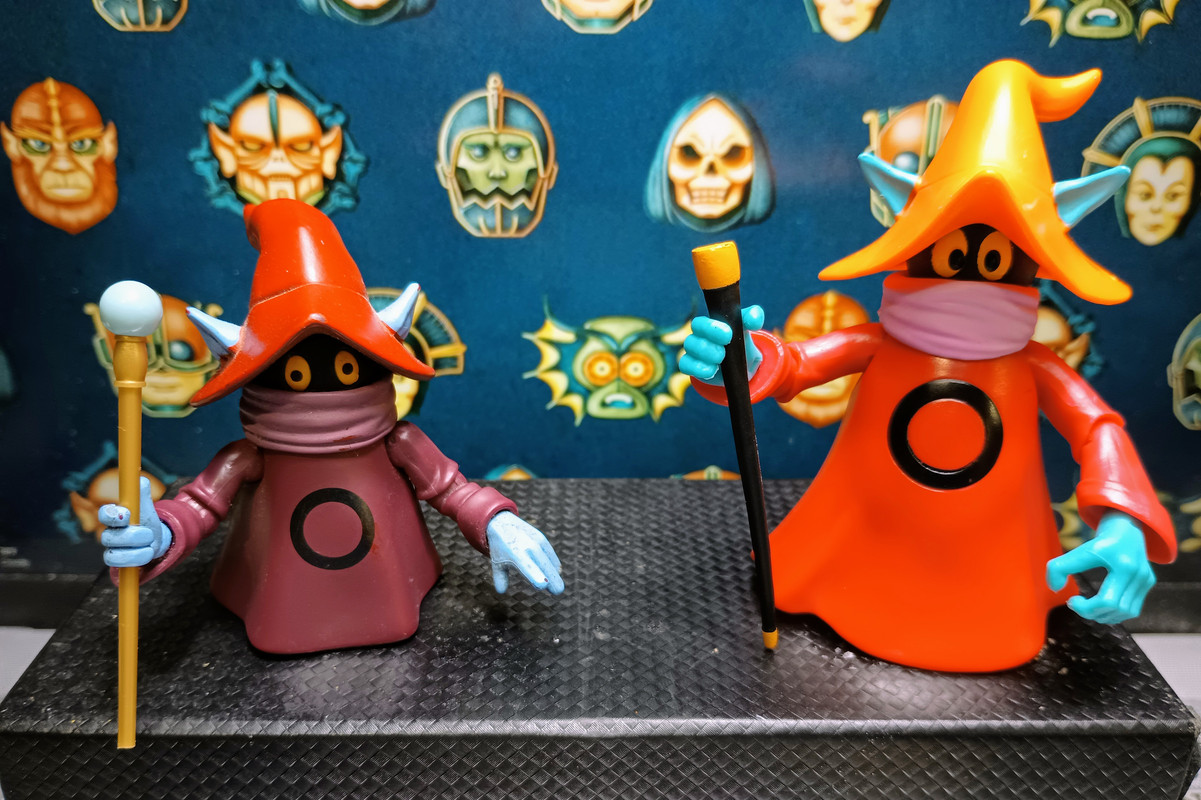 Ash Talon wrote: ↑
Sat Nov 12, 2022 11:04 pm
I don’t think Eternia is nearly as iconic as the other Haslabs you mention. It’s appeal is surely almost entirely based on how rare the original was. And 10k of this new one is a large chunk which can potentially appear on the secondary market. I don’t see it going up much on the aftermarket. Then again, I’m surprised this funded as quickly as it did, as I find it to be expensive and nigh-hideous.

I agree that a large part of Eternia's perceived value surrounds it's rarity. However that is basically the truth for any collectible. The rarer (more rare?) it is, the higher the perceived value. Which of course leads to higher prices. Eternia was a rare item when it was first released, and has never been released again. That combined with the nostalgia surrounding is probably the biggest driving factor for the crowdfund numbers.

However I disagree that it isn't as iconic as some of the Haslabs. I think each fandom has those iconic, centrepiece, items and for MOTU Eternia is it. Much like Unicron for TFs, the FLAGG for Joe, etc. etc.

Either way, there are less than 10,000 going to be in existence, which is less than Unicron ($575/10,000+ units) and a bit higher than the Khetanna (sail barge) which was $500 and had 5,000+ units (some number claim close to 8,000). Those two now circle the $2,000 mark on Ebay (sold listings). I imagine that Eternia will be the same in short order after it is finally released. The demand will be there, and being less than 10,000 units means it is a relatively small production run. To me that means it will be hugely expensive on the secondary market, just like Unicron and the Khetanna. MOTU may not be as large a fandom as SW, or TF, right now, but it is still more than large enough to drive prices up.
Top

i was more coming at the value from an inflation standpoint. Either way, I'm not sure Eternia will reach those crazy nuts prices. I think it will likely hold value but I'm not expecting it to skyrocket. I could see KG going for $100+ pretty easily though, and "Moaty" maybe like $50? The resellers are going to be taking a huge hit on shipping the playset itself, but I guess that could be said of your two examples, too. I'm still just bummed we didn't reach Keclar.

Back to my other point, I found Mantenna at Target this weekend, and for $15 no less! We've still got a few Jitsus floating around so I wasn't sure we'd be getting this wave in store. They actually had two of them, so that was cool to see. Makes me optimistic we'll be getting the Randor wave, too.
Top

Opened up the Snake Men and Roboto waves and Mekaneck last night and I think I've found my one, singular quibble about the entire line: I'm not crazy about the neck extenders being snap on pieces. I get why they did it that way, but I do miss the way Mekaneck's neck extended by twisting his waist. Even if it was just a pull-up/push-down mechanic, I would've loved to see the neck permanently integrated. Same with Rattlor.

Otherwise though, both waves look fantastic. I like the snake armored He-Man more than I expected. Really happy to finally have Roboto and She-Ra in hand, too (Kinda glad I got the plastic-haired version of her, to be honest, feels like it'll age better).

The ground ripper is surprisingly fun for such a simple toy. I like that in a toy line that was born as a gimmick, they don't go with any gimmicks for Origins.
Top

Found the following Origins stuff at Winners and Marshalls today. For my American friends Winners is the TJ Maxx branding up here for some reason, and Marshall's is.........well Marshalls

1 Origins Wind Raider (didn't look at the price, but they were $30 before)

Thanks, Canprime. The Terror Claws and Flying Fists @ $8 would be great scores. Will check it out.
Top 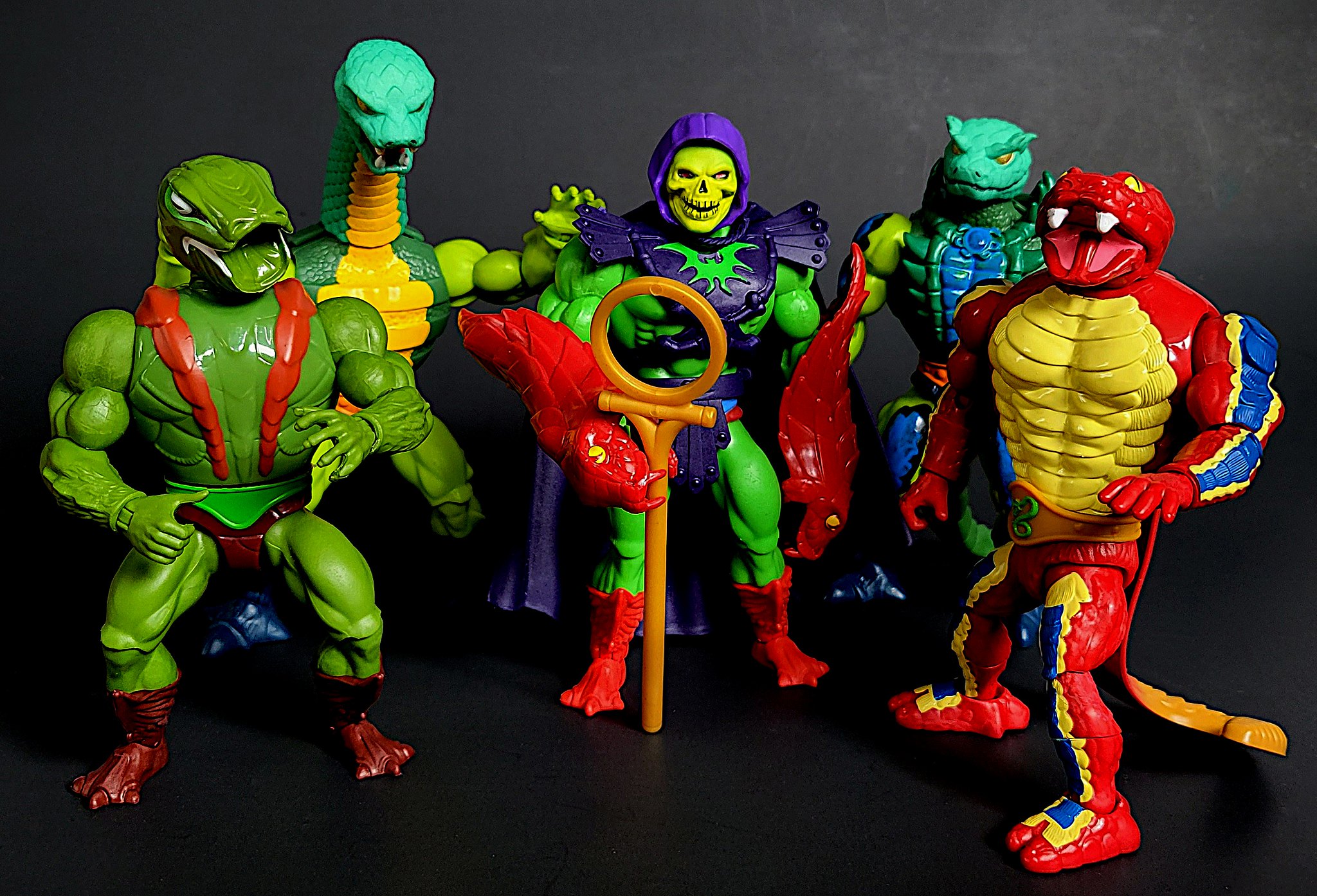 King Hiss is dead... LONG LIVE THE KING by Wes, on Flickr 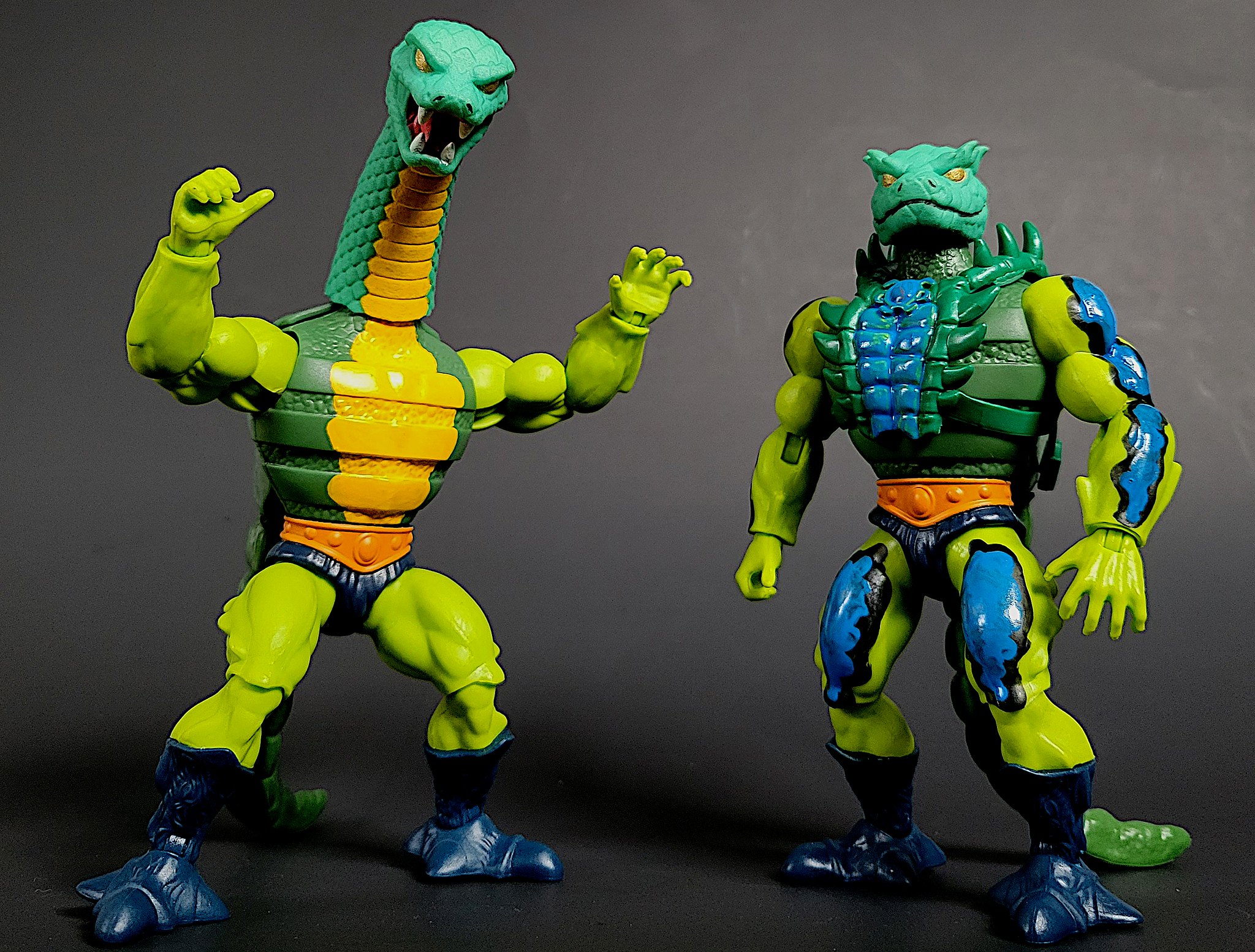 Hit up 2nd Chance Toys in Marietta GA yesterday and came out with some good loose MOTU:O stuff - Adam/Sky Sled for 10, Battlefield He-Man/BC for 10, Hordak for 15, LoP Mer Man for 10. Hordak was the only one I didn't already have but for decent prices I picked up from seconds.

Also grabbed a few Masters of WWE for good prices as well.

It's a really nice shop if you're in the area and haven't been there yet.
Top 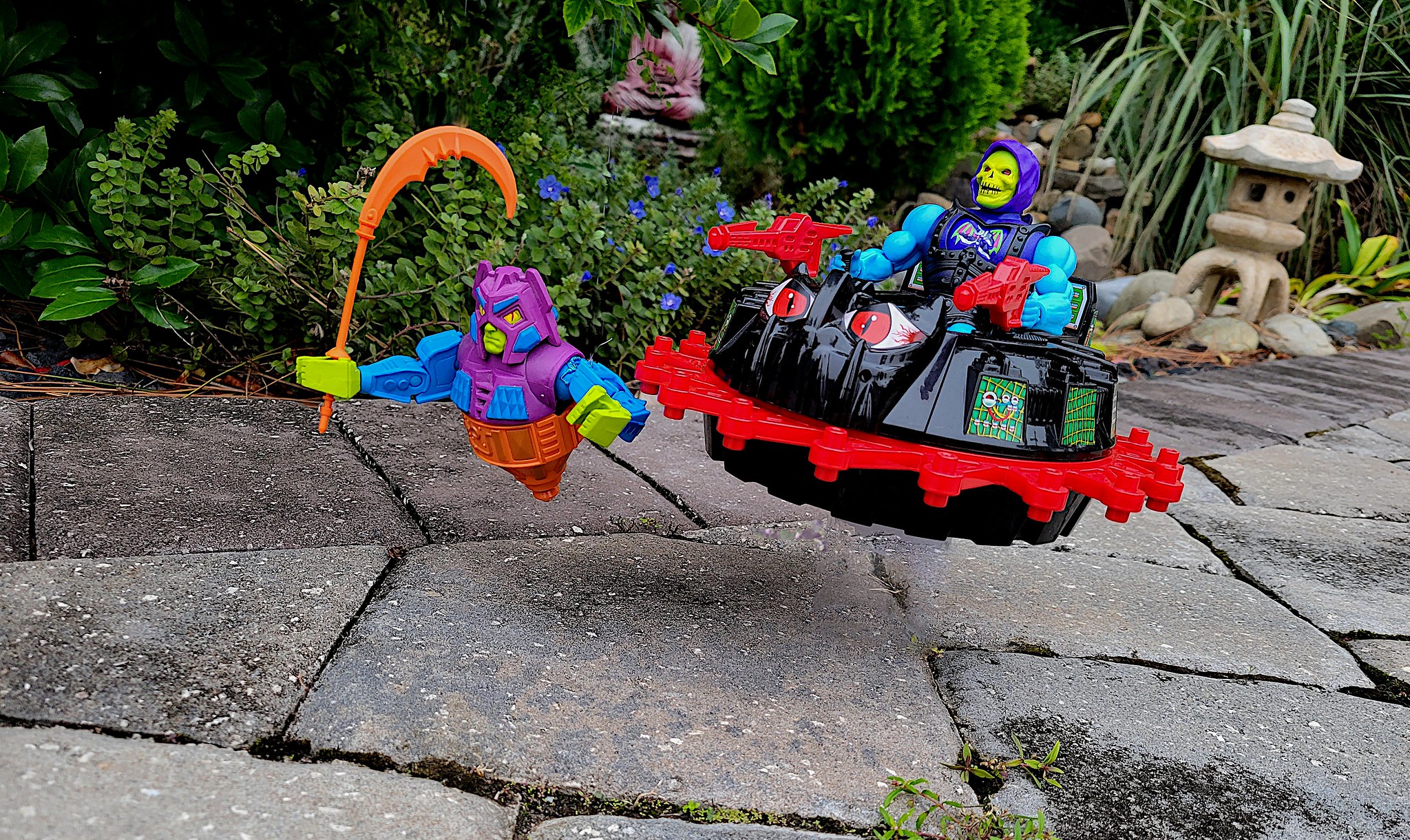 I managed to grab an extra 40th Trapjaw and one of those 40th shippers from Target over the weekend. It has some graphic tear from tape being put on it, but it's still a nice display piece that I honestly have no room for but couldn't pass up when I saw it in store.
Top

FYI, I found the 40th Trap Jaw at a Target last week at regular price, but they have a cyber Monday sale today where he's just under $13 (despite not being available to purchase online). I was able to take the figure back to Target and get a price adjustment, despite the website listing the Cyber Monday price as online only. Might be worth a try if you find him.


I really just want them to re-release Tri-Klops, Grey Stratos, and Zodak and I'll be happy.
Top

Bigbadtoystore has zodac for 20 bucks. Grabbed a set of series 2 over the weekend and with bbts getting series 3 in im playing catch up way faster than expected.
Top

Canadian Walmarts are starting to have wave 6(?) show up on shelves. That is the Webstor/Stinkor, etc. wave. Here is Canada that wave never made it to regular retail in any real numbers. Some online retailer got in some cases, but definitely not much outside of that. So it is nice to see something show up that we basically missed out on up here.

Now how about sending us that wave 1/2 stuff as well?? We never got either wave up here and I really need an Orko, Man-E-Faces and a couple others.
Top
Post Reply
3548 posts