I HAVE THE POWER! - Masters of the Universe Classics, MOTU200X, the vintage toys, PoP and yes, even NA - talk about them in here!
Post Reply
1254 posts


Why is it McFarlane's fault? Or are you just lamenting that he does the same thing Masterverse does with the tiny heads?
Faker is probably the worst since he has that 'metal' head with no hair. I remember watching the Smith aftershow for Revelation and they had Faker on a shelf in the back and I legit, no exaggeration, thought they forgot to put the head on the figure -- you could barely see that it was there even though the rest of the figure was clear as day.

Pretty much I blame McFarlane because while doing one of his videos showing off some prototypes, the ones that arrived in the plastic containers he said that he gets the figure in from the factories, checks them out and if needed sends information back to the factories to do corrections. The metal looking head for Faker seems to be around the same size as the other two heads in the package. I haven't opened Faker yet but looking though the plastic window seem to look that way.

Okay, I'm still very confused, though. Maybe I'm missing something really obvious here and I apologize for getting you to spell it out for me but.... McFarlane doesn't make Masterverse. What does Faker's head size have to do with McFarlane, or correction comments from McFarlane have to do with Faker/Masterverse?

KD, I don't know why I said what I said. I should have ranted about McFarlane's head sizes not being consistent at the DC boards, lol.
Sorry for the confusion.
Top

drkknght64 wrote: KD, I don't know why I said what I said. I should have ranted about McFarlane's head sizes not being consistent at the DC boards, lol.
Sorry for the confusion.

Not a problem. But you legitimately had me thinking I'd gone crazy and was missing some super obvious connection.
Top

drkknght64 wrote: KD, I don't know why I said what I said. I should have ranted about McFarlane's head sizes not being consistent at the DC boards, lol.
Sorry for the confusion.

Not a problem. But you legitimately had me thinking I'd gone crazy and was missing some super obvious connection.

Yeah, it's just crazy me.
It was just 3 days ago in a meeting briefing my part to the BN CDR he interrupted me and I raised my voice to a couple decibels above normal. Everyone in the room about 15 staff members got silent. The good guy he is, he just did the same thing back at me and then everyone laughed. Once everyone, including me stopped laughing I just finished my briefing and we moved on to the next staff member who had to brief.
Top

I got Spikor from Amazon. I don't know if Mattel tweaked the hips, but his seem much smoother than my wave 1 figures. I had to apply shock oil to all the male wave 1 figures and Faker.
Top

I finally saw wave 1 in person today at a local Walmart. Correction I saw wave 1 aside from the endless Skelegods and Battle Cats.

I have to say I was mildly disappointed. I like the looks of the figures, but they just seemed "small" somehow. Maybe it is the boxes causing that effect to my eye. Also I really see the small head issue now. Overall I like the looks of the line but, like I said, in person I was mildly disappointed. I will definitely pick up some of the figures as the line progresses, but I don't think I will pay full price for more than a select few.
Top

I've finally joined the club, as waves 1 and 2 have reached Europe. I've bought He-Man, Skeletor, Moss Man, Teela, Beast Man, and I should have Battle Cat later this week. Well, I'm pretty happy with them. Seems like a 7/10 line, a good start with great building blocks and a few silly flaws. I'm not a big enough MOTU fan to start a complete collection beyond the main 2 guys + big kitty, though. I'll keep the other figures as some generic fantasy characters/monsters or use them for customs (has anyone tried putting a MOTUC Chief Carnivus head on Beasty? He'd make for a great werewolf, or a lion in this case). Fortunately, I'm okay with He-Man's small head having the figure in hand. In case of Skeletor, though, blah. Such a weak headsculpt. But I remember that someone here mentioned using a MS Taskmaster head for him, and it looks pretty cool. I don't know if that person shared a pic before, so here's one from me. I'll take a better photo once I repaint the head and fit it properly on the neck peg. 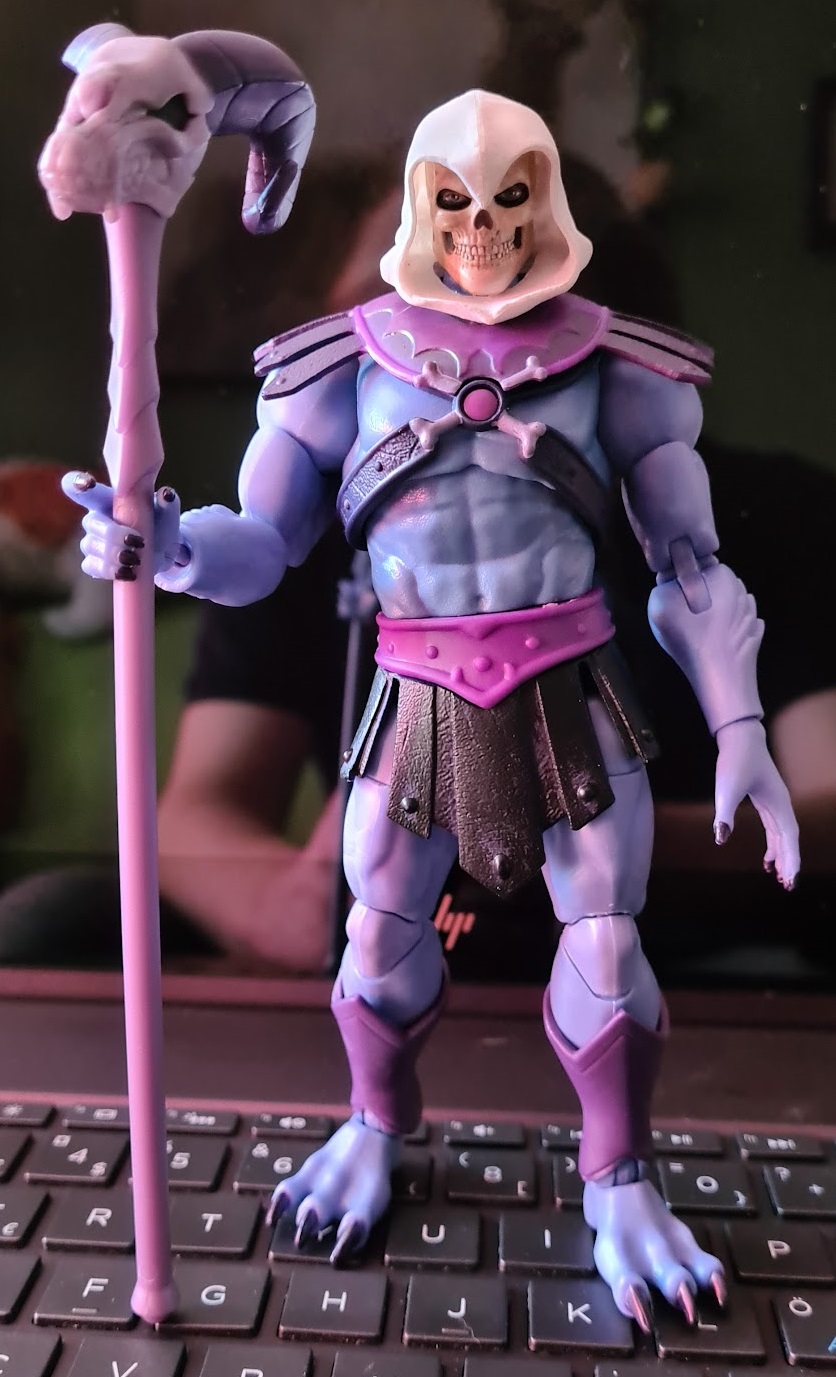 Yea looks good. I have the MS Taskmaster. Interested in how it comes out
Top

The Viking He-Man and Barbarian Skeletor look to have better heads. They come with vintage toy heads and the viking/barbarian armor is removable, resulting in figures that look like vintage toy homages, at least as much as Mondo anyway.
Top

I'm going to need another Evil Lyn as Sorceress with the awesome bat-helm she's wearing. That fit is fantastic.

Teela as sorceress will be a given. Randor in battle armor - yes please. Buzz Off, Stratos, Ram Man,

Masterverse can fill out at least 3 more 4 figure waves with just those. I'm sure the show will have even more..
Top

It's a bit of a bummer they had to make the trailer so spoiler-tastic to quell the criticisms of part 1. There's a few things that I would have like to have not seen until I was watching the actual episodes, even if I was kind of guessing they were going to happen.
Top

Thanks to the earlier posters mentioning shock oil. My He-Man, Skeletor, and Faker have all been cured of their tight hips. Hopefully they'll fix that issue as the line continues.

Bought the SDCC Scare Glow. Only issue is that the packaging is so good I don't want to remove him!

I'm going to need another Evil Lyn as Sorceress with the awesome bat-helm she's wearing. That fit is fantastic.

After that trailer for Part 2 of Revelations, I hope we get figures of

Well, I'll save some time and just say anyone in that trailer, I'll buy a figure of.
Top

Well, I'll save some time and just say anyone in that trailer, I'll buy a figure of.

Can't argue with that. I'd put priority on some of the show exclusive designs though, like the new Evil-Lyn, just because in the future we'll more than likely get a lot of those, and the differences between them and the classic looks are minimal. Seemed kind of like Orko might get a new look as well.

I'd also still like to see Roboto show up... where is that guy!
Top

Sorceress Evil-Lyn definitely needs a figure. I may even like that look more than the traditional outfit. Very, very cool.
Top
Post Reply
1254 posts