NO EVIL SHALL ESCAPE MY SITE! - DC Club Infinite Earths, DC Unlimited, DC Collectibles and all the rest! Come in and talk about them.
Post Reply
477 posts

Just ran across this listing on eBay for Darkseid. Looks like a nice, beefy figure, but I still need to see Batman or Superman to get a better idea as to whether or not they nailed the scale and aesthetic right.

not sure about the Superman on the back of the Darkseid card, but that Supermobile is looking like a must-buy purely for nostalgia value.
Top

Not my favorite look for Darkseid, but the figure looks groovy.
The Batman on the back looks like what I wanted Super Powers Batman to look like when I was a kid back in the day (I mean other than the insignia: I couldn’t have known I wanted the big black bat pre-TDKR/Year One). Very awesome.
Top

johngomez wrote: ↑
Wed Jun 29, 2022 1:59 am
not sure about the Superman on the back of the Darkseid card, but that Supermobile is looking like a must-buy purely for nostalgia value.

Agreed, I am in for the Batwing but the Supermobile is a must. Fun scale to collect vehicles in.
Top

First look at Superman in package. No c-clips it seems. 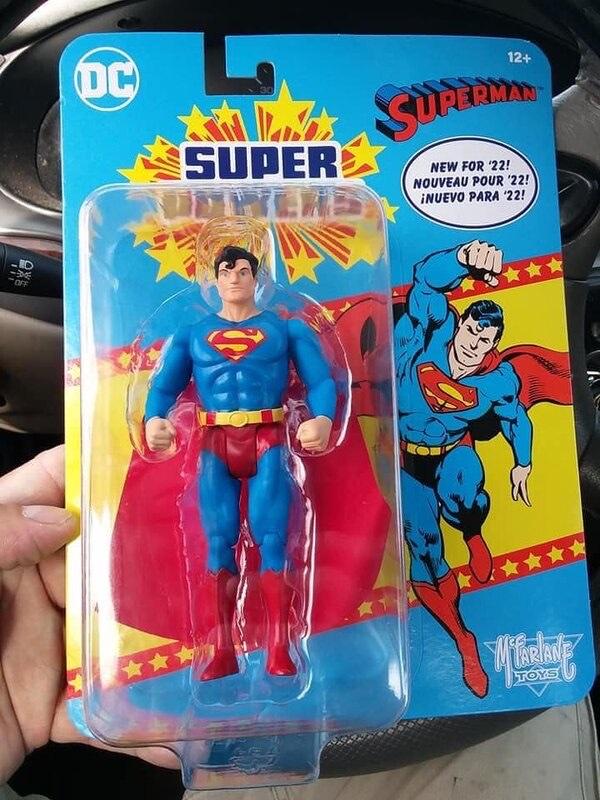 That cape is extremely disappointing. I don't need the neck clip, but the cape should at least be higher up. Maybe it's just falling off in that picture.

Otherwise, I love the look of it.
Top

I’m guessing/hoping the cape is a C clip and has just pulled off in the packaging. Surely they wouldn’t mount it that low.

Is this our first confirmation of the scale? Looks big. I like the design but was hoping it would be in the old-school size, especially with the limited articulation.
Top

Unfortunately, the fact that they've decided to go ahead and homage the original figures, but not replicate them exactly, leads this to look like a knock-off or bootleg figure. It's a shame cause I love the idea of having a chance at getting Super Powers figures again, but it seriously has an "uncanny valley" effect by looking close to the originals, but not close enough.

Kinda the same as the very short lived DC figures Toy Biz put out in 1989 which actually WERE "bootlegs" of the original Super Powers figures.

Anyone remember the line of Kotobukiya statues a few years back that also did the Super Powers designs? Those were much better, with the possible exception of "anime-izing" the faces. Of course the fact that they were unarticulated bricks with actual FAKE articulation lines sculpted in was also a bizarre choice.
Top

Looks good enough for me. Imma buy it.
Top

I might be in on these. I'll need to see comparison pics with the originals. I have the first two waves of Kenner figures, so I'm really hoping for some other characters who were never made like Batgirl or Kyle Rayner, or even 90's Aquaman.
Top

I am slightly disappointed as well with how this Superman looks (at least from this photo). I love everything about the original Super Powers Superman and I kind of have his image burned into my brain at this point. This one looks as if they wanted to re-issue the same figure but didn't put in enough effort or go far enough to do it right, so yeah, as said above, sorta bootleg-y.

Something looks off with the nose/face and the chest muscles are weirdly wider/rounder and the torso just looks a little frumpier and less heroic v-shape compared to the original. And he needs to have that heroic wider leg stance that the original had. Maybe more pics will having me feeling better about him. The chest logo does seem to be about right. I hope you guys guessed right that the cape is a c-clip and just hidden, because if not that would really raise the disappointment for me.
Top

I don’t have to buy them all but if they make JSA characters I’ll easily buy multiples.

I’m in for BATMAN and SUPERMAN, but why did they have to go with that godawful Lee DARKSEID design? Out of all the Nu52 redesigns, that is the BIG FAIL as far as I’m concerned.
Top

As much as I hate it, Todd’s not stupid. He is gauging the interest in a retro figures like Hasbro is currently doing with Marvel Legends.

Not what I wanted to see in the main 7” Multiverse line. I’m guessing we’ll see the first ones by summer 2023.