NO EVIL SHALL ESCAPE MY SITE! - DC Club Infinite Earths, DC Unlimited, DC Collectibles and all the rest! Come in and talk about them.
Post Reply
3689 posts

Those both look great. Getting them both.

I see thigh cuts on dark detective. There must be a bike coming for that Batman.
Top

noticed that they painted the lower arms properly on dark detective. no interest in that figure but it looks like a good effort
Top

maverick10126 wrote:I feel like Death Metal really soured people on Scott snyder. Which to be fair I ended up not like Death Metal as much as I hoped. But one story doesn’t take away from everything Scott snyder did. Snyder’s total Batman run is impressive. His New52 run is one of the few good things to come out of the whole New52 experiment.

I do think his crossover events leaned too heavily into Batman but it’s hard to blame him. Batman is widely considered the top DC name and he clearly has a good feel for the character.

We know there’s no way Todd is done making Batman’s. I’m cool with him calling it a day on the death metal stuff as those weren’t as interesting as Metal. I do however hope Todd’s not done with Snyder/capullo stuff. I’m probably in the minority but I’d love a New52 batsuit. I had the designer series figure and I really liked it at the time.

Lots of good things from that New52 run. Talon is definitely needed at the very least.

I think Death Metal suffered from releasing at a tumultuous time. DC was gearing up for 5G and all that stuff when DM was in production, and then suddenly Didio is out, 5G is recycled into Future State & other projects, and now DM needed to feed into everything. At the end of the day, Snyder did write it so he shares blame for any misfires in the story but I honestly think it would have been much different if he'd been able to execute the original plan.

I do agree on the rest of his stuff though, very very good. Batman #5 (the labyrinth issue) is one of my favorite comics of all time...I'd kill to get a box set of Talon and Court of Owls members similar to the ML Hellfire Club set. I'd probably buy 2. And certainly bring on N52 looks for the Trinity, and toss in the t-shirt & jeans Superman as well.

I got my Y2 Batman in the mail today, he looks amazing in box. Not sure where to put him yet, so I haven't opened him up. I'm tempted to try the arms to see if mine are jacked up, but I'll never display him without the shell cape so I probably will toss them in a bin. My 3J Batman arrived as well, and he looks outstanding but his chest emblem is a bit sloppy. There's black spots on the yellow. Amazing figure though!
Top

SalemCrow wrote: ↑
Wed Jan 19, 2022 6:04 am
I've recently gotten 3 Jokers Killing Joke Joker from GS, power suit Lex from Target, Lobo from Amazon (and YEESH, is his face bright white), and I ordered regular Swamp Thing last week from Amazon, and got this guy in on Sunday. 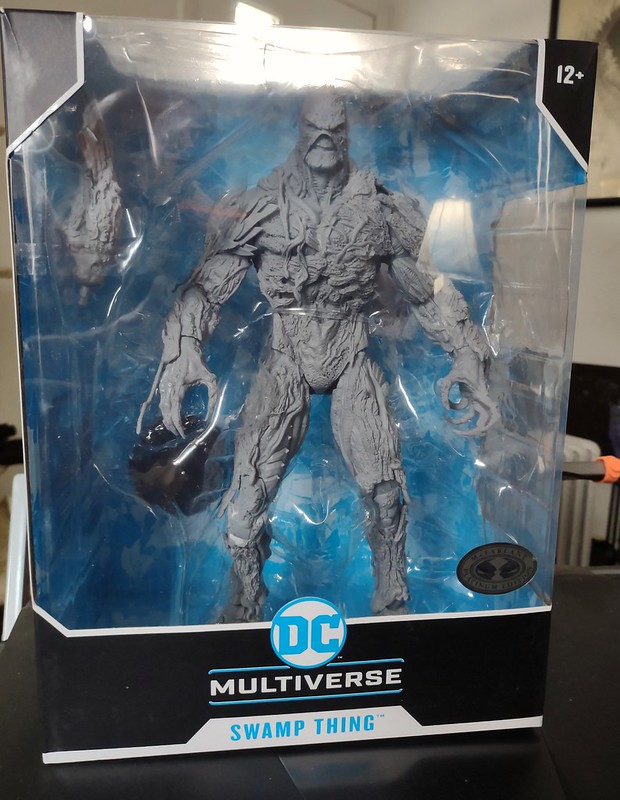 
Ugh, that sucks. I'm at the point now where I'm prepared to totally miss out on Swamp Thing unless I can find it in store...and he's one of my favorite DC characters. I just don't feel like gambling online. I've been focusing lately on Superman-related characters anyway.

I'm already done with these variants and they're just getting started. The only figures I have any interest in getting artist proof figures would be Rebirth Superman, 3J Batman and an eventual "iconic" Wonder Woman. They really need to check the ratios on these things.

I liked Future State, but I have to say I'm not digging those Batmen. I like the designs, but I'm just lukewarm on the actual figures in those images. They'll probably look better in person.
Top

i'd love a new talon figure. i have three of the old one and would be thrilled to replaced to them. a lot of new52 was legitimately good
Top

Welp I got my y2 bats today and the arms crumbled at the swivel the second I tried to move them. The plastic seems extremely brittle in that area. Dont know what they did different than the 3jokers batman as that one is fine.

Any tips to fix the arms and keep the articulation?
Top

Well geez, I guess I’m not opening my Y2 Bats. I was gonna get around to it maybe this weekend but not with this many complaints.

I do prefer the “art” look, and I don’t like soft goods on this scale anyway. Guess I’m happy with the way it looks in the box!
Top

Souther wrote: ↑
Wed Jan 19, 2022 7:43 am
Welp I got my y2 bats today and the arms crumbled at the swivel the second I tried to move them. The plastic seems extremely brittle in that area. Dont know what they did different than the 3jokers batman as that one is fine.

Any tips to fix the arms and keep the articulation?

One of the old go-to's is replacing a broken swivel peg with a comparable sized screw.
Top

Souther wrote: ↑
Wed Jan 19, 2022 7:43 am
Welp I got my y2 bats today and the arms crumbled at the swivel the second I tried to move them. The plastic seems extremely brittle in that area. Dont know what they did different than the 3jokers batman as that one is fine.

Any tips to fix the arms and keep the articulation?

This is unfortunate. Mine is arriving today. If my arms crumble off it's going right back to the store and I'm not going to seek a replacement. I've put too much work in on this figure already.
Top

I must have lucked out because both the Year 2 Batman figures I opened haven’t had any arm breaking issues. The one I have been taking pics of every day I since I received him and the other has been on my shelf since Target relisted them last week. He was supposed to be my MIB figure but his head fell off in the package a few days after receiving it so I had to open it and pop it back on. But when McFarlane announced the second stock I put it on my shelves the moment I place the order last week.

I guess if one were to break I probably would just get another Three Jokers Batman and use his upper arm/shoulder with the Y2 elbow/lower arm to fix it. The colors may be slightly different but I think the shadow of the cape would hide it enough to notice.
Top

More Batmen I don’t care for,just show the Hush 2 pk already,and if it isn’t a Jim Lee version I’ll be skipping that one too! Is it too much to ask for a simple black and gray Batman with black trunks and a black symbol???
Top

It's not too much to ask considering a simple black and gray Batman with trunks and a black symbol was literally the first figure released in this line. Granted, it was bad, but still, it has already been done.
Top

Love the Dark Detective and Next Batman. Looking forward to more. Jon Kent (already rumored), Yara Flor, FS Nightwing, and a handful more would be great.