NO EVIL SHALL ESCAPE MY SITE! - DC Club Infinite Earths, DC Unlimited, DC Collectibles and all the rest! Come in and talk about them.
Post Reply
2988 posts 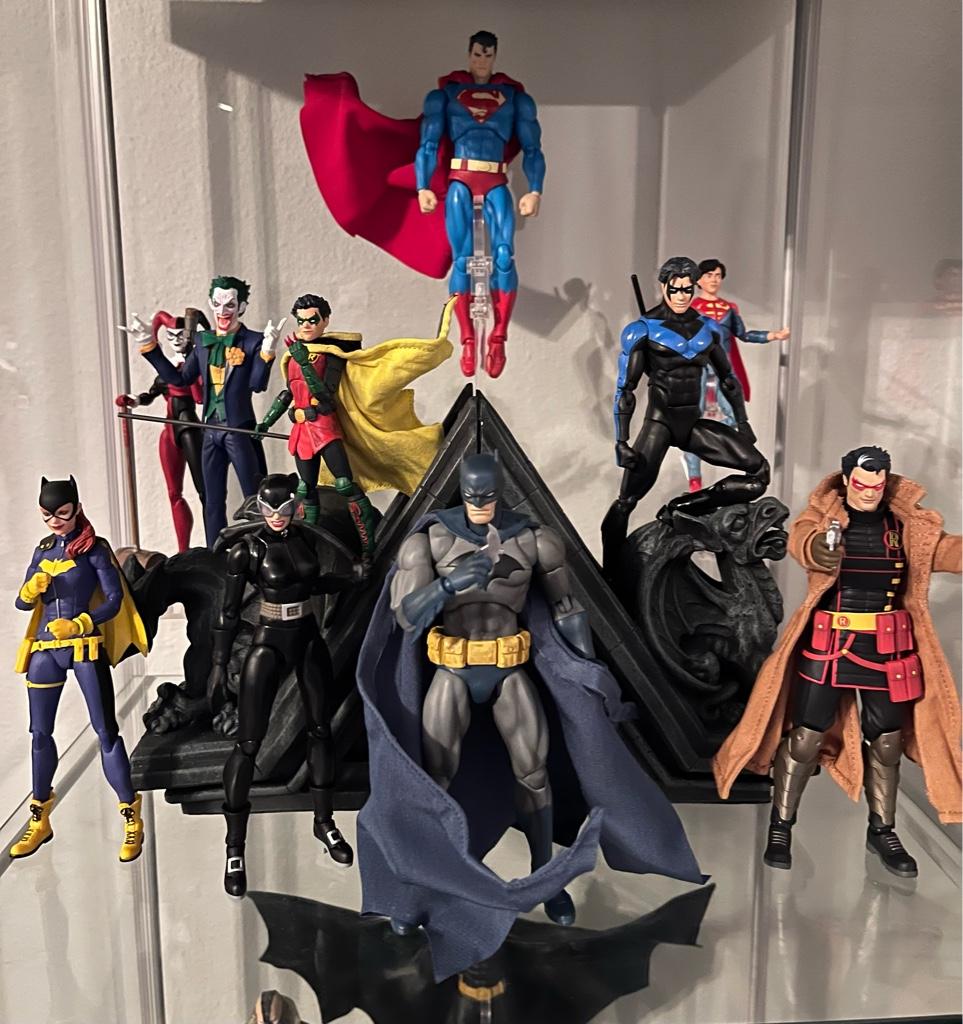 If they can keep going with Jim Lee style figures (every time I look at Cyborg Superman, it looks like he'll fit with Hush Clark PERFECTLY), this will definitely be my default DC collection, which will be nice, because I've been trying to find a "definitive" for awhile, from DCUC (had every character I wanted) to DCC BTAS/TNBA (missed too many, especially my favorites, who are now too expensive, and it's just not a posable line).

What Batgirl figure is that, and how expensive is she going to be for me to add her to my collection?

I'd guess DCC, but pretty sure all their stuff would tower over these, not fit perfectly next to Catwoman like that.

As Dark Knight mentioned, those are DC Icons figures which are discontinued now unfortunately but I find the scale and aesthetic fits really nicely with the current Mafex stuff. At the time, the line wasn’t really appreciated because it didn’t scale well with ML and the figures do have some articulation challenges.
I would NOT recommend looking at current aftermarket prices for those as they go for outrageous prices now lol…

They are honestly too small to go with the Mafex properly.
Top 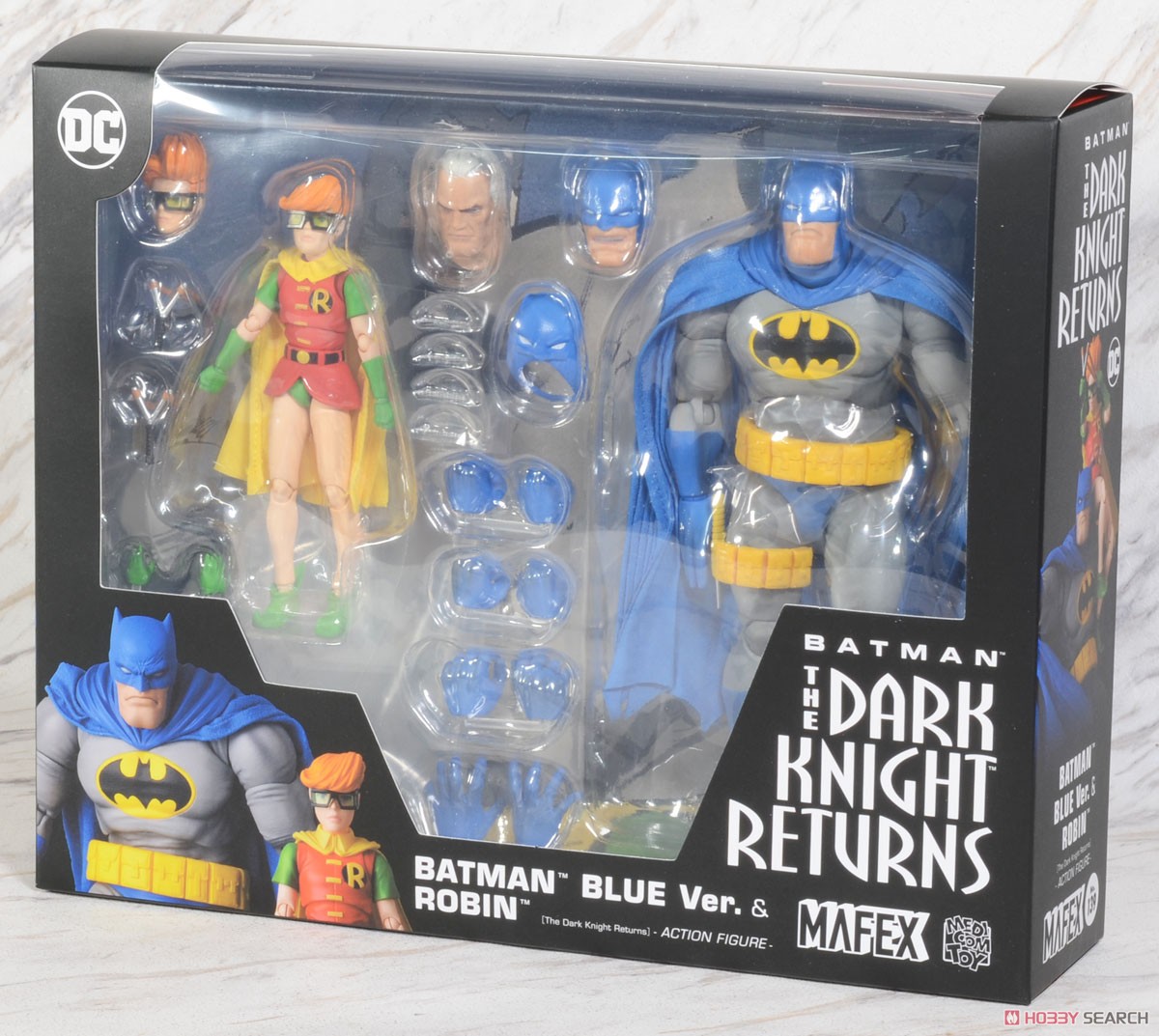 I love the presentation of that packaging.

Noooo, it was so nice not having money taken from my account these past few months. Those colours on Batman look great, though.
Top

Yup, already got my notice from HLJ!!
Top

MAFEX can really crush a comic-accurate Batman figure. I hope they continue to make many different eras and artists.
Top

I am shocked this one is gonna manage to squeeze in there and be my "last" toy purchase of 2021. I thought it'd be a few more months for sure.

(Amazon currently has Armored DKR Batman listed for January 1st, but we'll just see about that.)

My only disappointment is with the symbol. It's way too "on model" with the Batman marketing brand and doesn't look at all like Frank drew it. And it looks like there's nothing we can do about it...it's sculpted into the chest just like the other MAFEX DKR Batmans.

Looks like they added the "down cowl" piece cause that wasn't in the solicitations, so that's nice. I think they got rid of a Batman head though, unless it's hiding in the package. No big loss, the two "teeth-gritting" Batman heads were pretty much identical.

It's cool that he has those knives in his thigh pouches but I doubt they're removable.

This Batman really is the "Book Two" Batman, or maybe even some scenes from the end of Book One if I'm being generous. In Book One, Miller really did draw a restrained, Neal Adams-esque Batman, but by Book Two, he was just getting bigger and crazier with every panel.

On my shelf, Carrie's gonna stand next to the black symbol Batman, cause the only time she ever really encountered Bruce in the blue costume was when he was trashed by the Mutant Leader.

Very cool that I'll finally have this in my hands in a few days (since I'm in Japan.) Surprised there aren't more photos out of Hong Kong yet...this is OFFICIALLY released in Japan tomorrow!

Hope all the international couriers get their stuff together and you guys all get this before Christmas....what a nice way to end the year that will be!
Top

I've been thinking about other characters mafex could kill it with and i have a list.

RedRobinCustoms wrote: ↑
Sat Dec 04, 2021 6:21 am
I've been thinking about other characters mafex could kill it with and i have a list.

Wonder Woman. After her, everyone else is gravy.

I hope the pouch belt on the thigh can be removed.
Top

Got the payment request from Amiami for the two-pack. Looking forward to it! Kinda wish they’d do another run of the black/grey version again, but at least the McFarlane is coming out soon.
Top

Hush joker shipped from bbts should be here tomorrow
Top

I was thinking about that too. I'm looking forward to the first video reviews so they confirm. My guess is that it won't be and my only complaint is that the knife that seems to be there is a little bit out of place. No big deal, but after nailing something so close to the source material I don't know why they added that detail, seemingly out of nowhere.
Top

Looks like they added the "down cowl" piece cause that wasn't in the solicitations, so that's nice. I think they got rid of a Batman head though, unless it's hiding in the package. No big loss, the two "teeth-gritting" Batman heads were pretty much identical.


From the picture a couple pages back I see that we have 3 heads: Batman, Batman with grinning teeth and Bruce Wayne. This is consistent with the description I have seen in most places (like BBTS: Bruce Wayne head sculpt + 2 Batman head sculpts). I think that some of the promotional pictures portrayed 3 head pictures together including the grinning teeth twice. It wasn't supposed to have two very similar batman heads. Maybe that picture was a little bit misleading.

The batman heads are consistent with what we have seen in other batman figures (Hush Batman also includes "regular" and "grinning teeth" heads). I like the Bruce Wayne head because it's quite unique. The "damaged version" DKR batman included a "bruised" Bruce wayne head and the armored Batman includes a "grinning teeth" Bruce head.
Top
Post Reply
2988 posts