NO EVIL SHALL ESCAPE MY SITE! - DC Club Infinite Earths, DC Unlimited, DC Collectibles and all the rest! Come in and talk about them.
Post Reply
7728 posts

My opinion, Batman looks best yet. An amazing addition to the shelf, no doubt what so ever that we have more Batman to come. I don't know how anybody can consider passing on this guy if you collect the line but hey whatever. This line is delivering, way more than I expected. I really had doubts that McF could do DC justice. These last couple of months those doubts have evaporated. Lots of (Great) figures to look forward to and seriously excited to see what else they come up with.
Top

That being said, someone really needs to tell Todd that Batman does have other adversaries besides the Joker.

In fact, Bats has arguably the best rogues gallery of any comic book crime-fighter, and they desperately need some Multiverse figure representation. McFarlane would absolutely kill it on figures like Two-Face, Penguin, Black Mask, Scarecrow, Mr. Freeze, Catwoman, Riddler, Ras, and etc.

Once these 3-Joker figures come out (and possibly the "Death of the Family" Joker), I honestly don't think you could get me to buy another Joker figure. So hopefully they will start expanding on the Bat rogues gallery in the coming months.

I would love to see McF expand the Bats rogues gallery, we all have our favorites, Mr freeze and Penguin being the 2 I am waiting on impatiently.
Top

Ninjak wrote:Love this wave, especially the Batman, and all three Jokers. Batgirl and Red Hood are very nice as well.

That being said, someone really needs to tell Todd that Batman does have other adversaries besides the Joker.

In fact, Bats has arguably the best rogues gallery of any comic book crime-fighter, and they desperately need some Multiverse figure representation. McFarlane would absolutely kill it on figures like Two-Face, Penguin, Black Mask, Scarecrow, Mr. Freeze, Catwoman, Riddler, Ras, and etc.

Once these 3-Joker figures come out (and possibly the "Death of the Family" Joker), I honestly don't think you could get me to buy another Joker figure. So hopefully they will start expanding on the Bat rogues gallery in the coming months.

After the Three Jokers, I don’t see myself buying another one. They should cover all the bases I need covered.

Eh, I bet Todd can’t help himself and will make Leatherface new 52 Joker soon enough. How could he pass on Joker wearing his own face as a mask? That’s so old school McFarlane.
Top

I hated that idea. So good for people that might want it, but it would be an easy pass for me. A Nicholson Joker might be the only other one I’d ever buy.

maverick10126 wrote: ↑
Mon Sep 20, 2021 7:13 am
I love how Todd puts out one of his best Batman’s and a Batman that’s pretty similar to the much praised David vonner prototype…and theres still comments like “well…I wish this was different.” It’s just funny. Everyone has their own preferred look for Batman.

It's not similar at all imo. It has grey trunks. Vonner's Batman figures were the two most iconic versions of Batman, black trunks/cowl/cape/grey and blue trunks/cowl/cape/grey. Todd's/Three Joker Batman ranks very low on iconic/most wanted Batman costumes. Who was clamoring for this specific grey trunks look from 3J? I don't think many were to be honest.

If this figure had black trunks or blue trunks/cape/cowl it becomes the best Batman figure ever released at this price point easily, maybe ever in general (though the MAFEX Hush releases are hard to beat imo). Luckily it is an easy paint job for the black and once it gets done it will be a perfect figure for me.

Frankly, it is pathetic we haven't seen a good classic/iconic Batman, Superman, or Wonder Woman release yet. This Bat figure is the closest we got. We all know Todd has the potential for figures to be Figure of the Year or be the definitive figure for characters, he has done both multiple times over in my eyes, but he needs to do it for the Big Three still, that's why even great figures like this can come off as disappointing. I think that speaks more to what Todd accomplished and the potential of the line. I mean, if we got this from Mattel, we all would be freaking out at how great it is lol. We get this from Todd, and are like, amazing, but.... (enter criticism here).

That's what I meant about it being pretty similar. I mean it's a pair of black trunks away from being a pretty good default Batman for a lot of people. The thing that people praised Vonner's Batman for the most was the articulation scheme and the clean comic lines of the suit.

Here we have a Batman that has a clean suit, great articulation scheme that's almost identical to Vonner's and it's generic enough in it's look to not really feel story specific. Heck this one even has the wrinkles like his does.

And yes, I agree....Todd has set the bar high leaving room for us to have criticisms for it. Heck, had this figure come out a few years ago....before the Mafex Hush Batman and in ML scale this would have been THE end all Batman.

I still think this figure gets some re-use down the road. I definitely wouldn't be surprised to see it released again as a basic year 2 Batman without the huge cape.

And as we have seen in the past, Todd can retool a torso like he did with DC1000 blue variant with an alternate symbol pretty easily. Maybe we will see this figure reworked into and Infinite Frontier era Batman with a large bat symbol without the oval.

Rather than paint, I might just try swapping the Arkham Asylum diaper on this figure. Yeah the belt is different and gold but I like all different kinds of bat belts.
Top

Are people really comparing this $20 Batman to the $120 Mafex Hush Batman?... I'll paint the trunks for WAAAAAAAY under $100 and be much happier with the scale and look.

Honestly, from my point of view, the Mafex figures shouldn't cost more than 60 bucks. I just don't see any value in them beyond that, especially not when they creep close to a hundred. And I definitely don't feel that Todd's new Batman is in any way worse than Medicom's. I mean, there's the cloth cape but it's not worth a $100 alone.

Speaking of, I'm sad to see that Todd's latest cape sculpts have become so boring. What happened to the fun and expressive sculpt of Batgirl, Metal Bats or Arkham Knighit Batman?

Oh, and for anyone who doesn't know, it's not like I never spend more than $25 on a figure. I'm a huge Storm Collectibles fan, and in my eyes those figures are more often than not worth the money.
Top 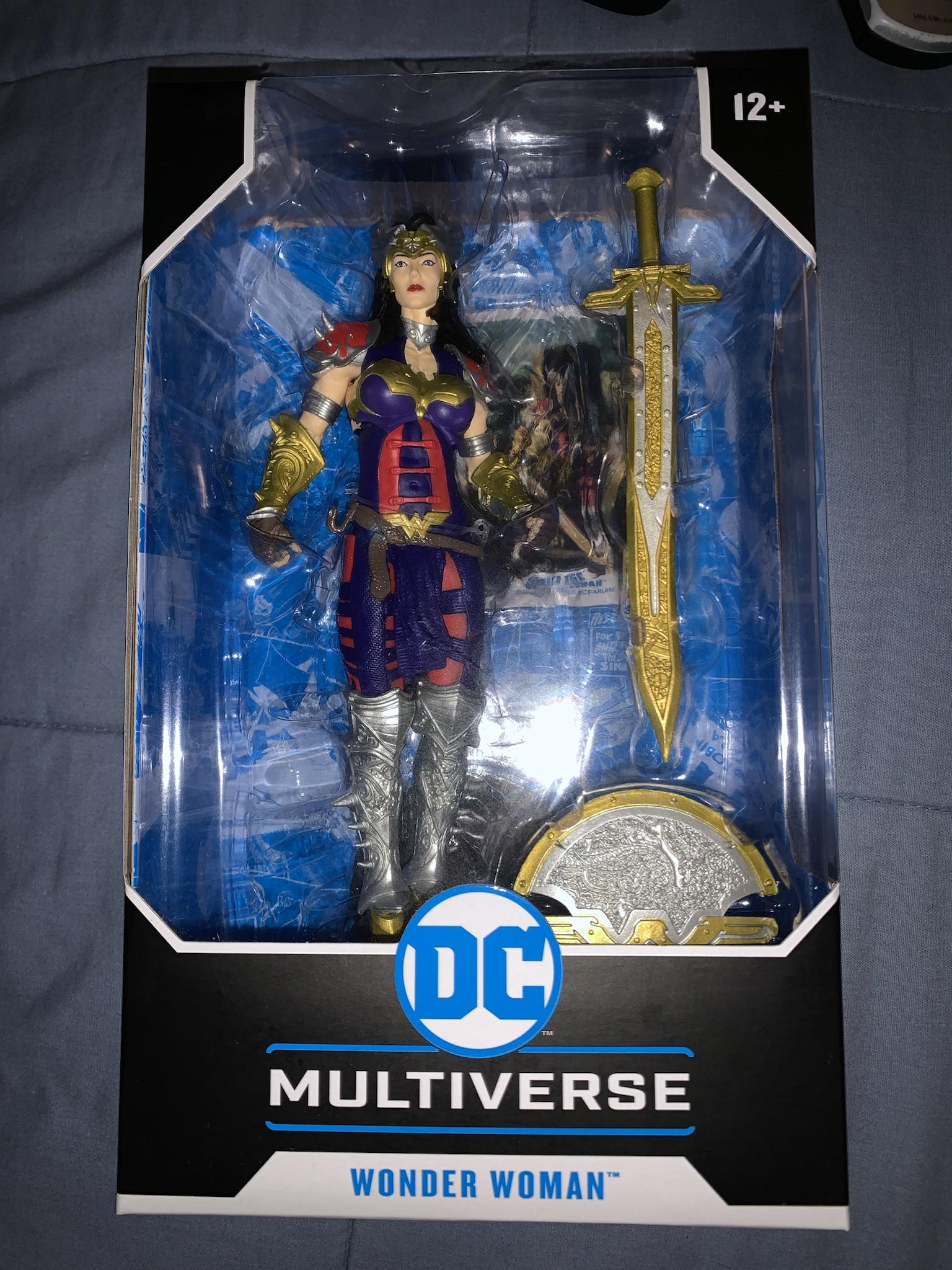 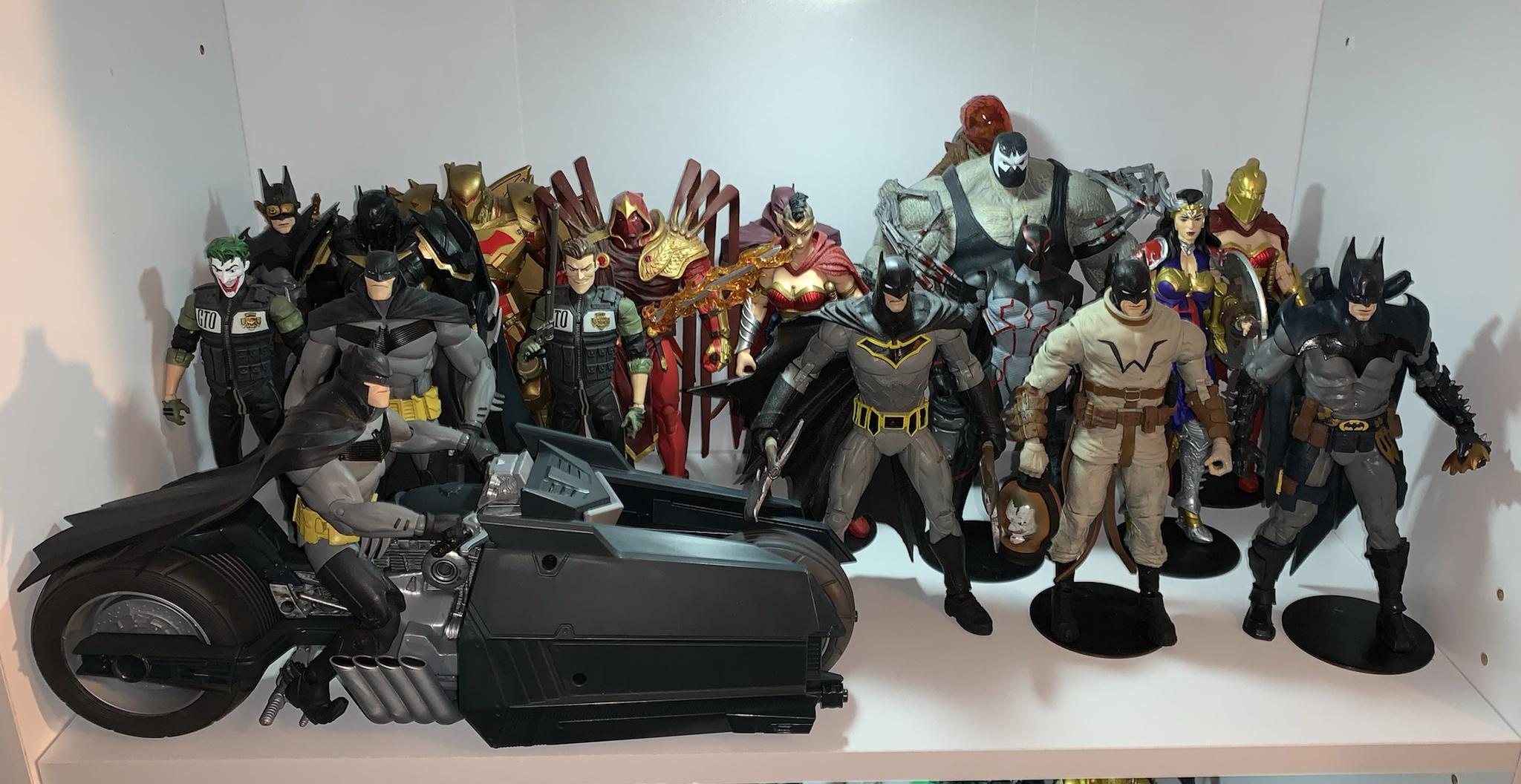 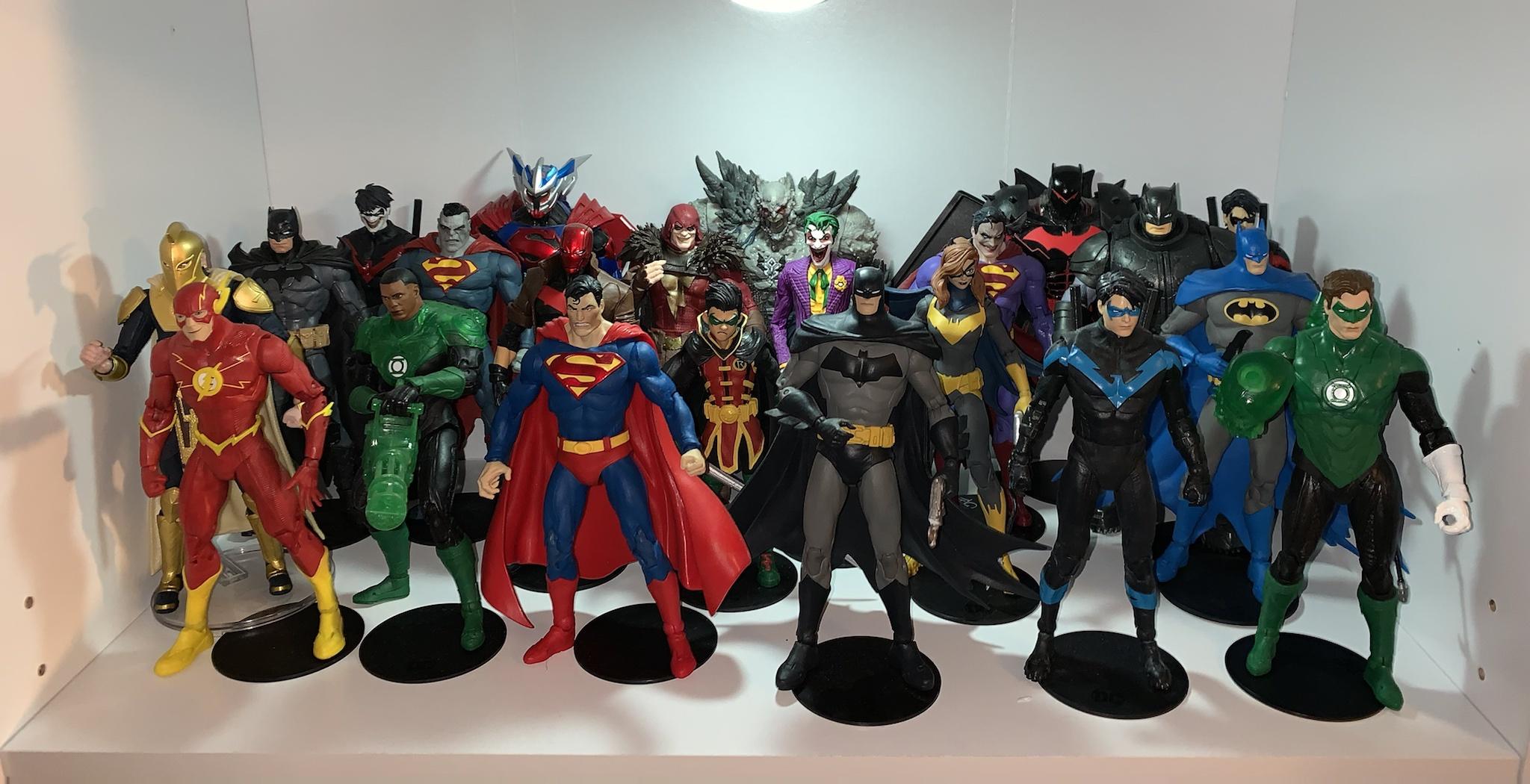 My opinion is this:

bananaman wrote:My opinion, Batman looks best yet. An amazing addition to the shelf, no doubt what so ever that we have more Batman to come. I don't know how anybody can consider passing on this guy if you collect the line but hey whatever.

I'm definitely considering passing on the 3J Batman. Maybe it's the grey trunks, I don't know. The figure is leaving me cold.
And I last night picked up the Target Death Metal Capullo Batman. I love it. It's a great modern classic. I also love how Capullo used the basic Bat symbol with a yellow outline. I had a redesign I did of Batman I made myself over 15 years ago using the same concept. I'm not saying Capullo stole my idea, I'm saying it is just a nice obvious natural progression of Batman's symbol.
But, even though the Capullo Batman is battle damaged and story specific to Death Metal, I'll likely pair it with the three Jokers, Batgirl, and Red Hood from the new wave. I think it will look good with them.

Metal Bats has a great sculpt. Going back and forth between that sculpt vs Three Jokers. Just love the texture on Rebirth Bats and you can't really see the battle damage without the red paint.

I think 3 Jokers Batman slightly misses the mark for some because it's neither a modern or classic Bats. It doesn't have the texture or detail of Rebirth Bats, but it's missing the trunks and smooth boots/gloves of classic Batman. It's a weird in-between.

We've all been waiting for a comic book Batman with proper proportions. If Todd had just totally redone the DC 1000 Batman with these proportions...I would have been just as excited.

If there's anything we can count on from this line, it's more Batman figures. And this sculpt is a good reset point.
Top

On the topic of the line in general...I love the turn around time on the figures. Pre-orders go up 2-3 months out from delivery most of the time. That works, I like that time span. I personally hate when my pre-order numbers creep too high. Right now I have 45 items pre-ordered at BBTS. Of those 45, only 7 are DC Multiverse. Multiverse are listed for pre-order....a few months later I have them and they drop off my list...and other figures pre-ordered are still sitting there....keeping the list long. They might be sitting there for 6 months, 1 year, 2 years. It's crazy. I understand different business models and all that but it's just a thing I like about this line. I don't wait too long after pre-ordering to getting the figure in hand.

So on the topic of the 3J wave....they might sneak in this year based on his reveal/release date time frame. They could be another batch of December figures.
Top

My first McFarlane purchase was the Year 2 Batman and my second will be the trench coat version of the Joker.

I really like only buying a very select group of characters from a series without going all-in or feeling the need to re-buy an entire universe of character.

Basically, each McFarlane purchase will be a standalone piece outside any kind of universe building or character specific theme.
Top

TNI posted promo pics of the 3 Jokers line; they're up on Walmart, but not available for PO just yet. Batman looks even better, IMO...
Top
Post Reply
7728 posts