The death of the Amber Collection is sad. Especially since that damn Dilophosaurus is now way too expensive to get. I suppose there's still a possibility for a Colossal-scale (1/12) Triceratops.

I do think the dinos look nice, though. The Raptor looks like a scaled-down version of the Amber one, so a 1/18 Raptor as poseable as the Amber one is impressive.

I was sure I was done with Jurassic stuff as I hit my limit on dinosaurs (unless they made more Amber ones). Super-poseable dinosaurs (even at 1/18) will be really tempting though.

Tempted to put a preorder in, but all those authorizations Target does have me reconsidering. I haven't had a problem per se with them in the past, but I think I'll just wait till these hit stores. It hasn't been hard finding any JW/JP stuff at Target.

I did say knees. I think only Hasbro has ever done one figure in the scale with double jointed elbows and it sucked so bad no one else has ever even tried.
Top

As a 1:18 collector for JP, very curious where this goes. The two dinos they are showing look very good, but oddly I am not sold - mainly because I feel they may not blend in all that well with what they have put out so far, so will have to see if it hooks me or not. I do hope it leads to a few more humans in that scale from the original trilogy of films.

Sorry for you 1:12 scale aficionados. Hope the kids from JP1 are made at some point to help close that out, maybe Mattel will go ahead as an SDCC or other exclusive.

I hope some of you consider the 1:18 scale, which has a lot of breadth to it between dinos, humans, and vehicles. Given the prices on other lines these days, things like the Brachiosaurus that came out at $50 and the small dinos for about $10, there is good value for what you get I feel.
Top

I just like dinosaurs and articulated toys, so scale isn't a huge factor for me as much as cool dinosaur action figures. I would hope that the Target exclusivity doesn't mean it won't also show up in Canada, perhaps as a TRU exclusive, as well as other international retailers.

These being 1/18 means they could also live happily with lots of the Beasts of the Mesozoic dinos.
Top

The reveals look great, I'll admit. As a big fan of the Parasaurolophus, I'm glad to finally get a highly detailed, well-articulated version. I may have to wait and see how they turn out in person, but chances are I'll collect them. I'm sure they'll go back and redo all the Raptors we've gotten in Amber Collection so far too, but I'm excited to see what else they put out.

Super bummed about the Amber Collection, though. I knew we'd probably never get any of the bigger dinos, but I was hoping for Tim, Lex, and the female JP3 Raptor, at least. Pyroraptor would have been super cool in Amber from what we've seen so far too. I'll probably keep what I have so far, if only because they're still super well done Raptor figures. Not sure about the humans, though. Especially if they do get around to making all of them again in the Hammond Collection.
Top

While I enjoyed the Amber Collection, 1:18 scale is where it's at for me when it comes to Dinosaurs and the human figures that accompany them. I usually prefer 1:12, but when it comes to JP 1:18 is King.

Can't wait to see what else is to come in both the Hammond Collection, and especially the Legacy Collection. If we could just get a Lex figure, I would feel so complete. Not that I'd stop buying stuff after Lex. But having her would just make it all feel like if they stopped making figures of JP today, I would feel completely satisfied.
Top 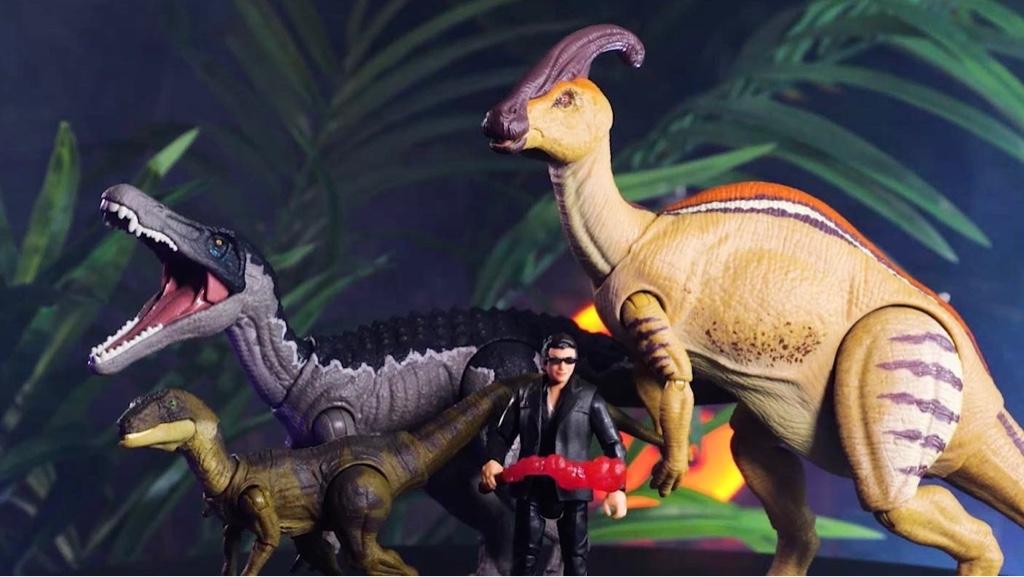 I’ll pass on the Hammond Collection and lament the Amber Collection. I do hope Lex and Tim come at some point for Amber. And Lex for the 1:18 stuff. But as good as 1:18 articulated dinosaurs could be, I don’t have the space to store or display. To those of you who will be getting these, enjoy and share pics!
Top

Yes, yes, yes on Lex! Def hope this new Hammond collection results in seeing her join the gang. Wu & Gennaro would be fun at some point, but Lex feels like the last major omission from the first film.
Top

This makes perfect sense as a way to keep those adult collectors who want articulated dino toys, and the line has been going long enough that JP collectors are probably ok picking up film coloured, articulated versions of the dinos they've already bought 4 times with 4 different play features. Plus, these are looking great.

I love my Amber raptors and am pretty happy I got a Dilo and a Pteranadon to go with them, but I don't need any 1/18 dinos because I don't have anywhere to store them. I will happily grab the new Raptor though, he's looking great.

I'm going to be living vicariously through the reviewers who are buying these.

Actually, was just watching a video on YT where they're claiming this could be a leaked list for the Hammond Collection:
April 24:
Parasaurolophus
Baryonyx
Pteranodon
Ian Malcolm
Quezlcoatlus
JP Velociraptor

If this is true, that's pretty wild, as it's more dinos than they ever released in the Amber Collection in the span of a few months, and it would also go a long way towards getting collectors a basic set of most of the standout JP original dinosaurs. If they do a Rexy and a Triceratops, I'm going to have a hard time not adding them to the collection.
Top

I've almost gotten into both the standard line and the Amber Collection several times, but never pulled the trigger.

I think the Hammond Collection is going to finally rope me in...assuming that I can find it. These look exactly like the sort of JP dinos I've always wanted.
Top

I would prefer 1:12 dinos, and do hope that line continues somehow. I will watch this new line with interest though.

I've always been a sucker for a good Parasaur. I wonder how this will compare to the old Jurassic World one in size. It's also interesting that the articulation is not standardized. There doesn't appear to be ankle articulation on the Parasaur, but there is on the Baryonyx.
Top

A line like this with humans, dinosaurs and vehicles is much better suited to this smaller scale. I love what they've given us so far in 1:18, and will definitely be cherry picking items from the Hammond Collection.

The Amber collection seemed pretty great, but I only grabbed a couple raptors myself as I've been steering away from 1:12, and just dont have the room to get all the stuff I want in a 1:12 JP line.
Top

My bad. I somehow twisted knees into elbows. Apologies.
Top

My bad. I somehow twisted knees into elbows. Apologies.

No worries, but that sounds painful.
Top

If they are dropping the Amber Collection scale then I am definitely dropping Jurassic Park altogether.