PantherCult wrote:Went ahead and ordered Ellie and Hammond - mostly just because there are so few six inch civilian figures made and these will make for solid crowd scene filler in displays. I picked up the Pratt and Goldblum figures for similar reasons. It was nice to see a Target pre-order that didn't sell out in a matter of seconds.

Me too. Although they scale a bit too much on the large side.

I honestly wish they hadn’t changed the arm articulation. The bicep cuts are really ugly.
Top

Does anyone know a good source of 1/12th or 1/10th SPAS-12 Shotguns, in case Muldoon didn't come with one?
Top

Thanks for the heads up! Looks like Amazon changed their prices as well.

Deciding if I want to double dip on the Pteranadon or wait and see if the other paint scheme is still coming. I really like the white on the other one, but haven't seen sightings of it anywhere.
Top

It's been awhile since I bought a figure purely for the accessory, but Dr. Sam Jackson's 90s desktop computer and hard drive are so necessary for my Buffy collection that I couldn't resist him on sale.

Yeah, I finally caved on Arnold as well! Felt worth it at 10 bucks!
Top

Just got e-mails from BBTS saying to expect my pre orders of Amber Collection Ellie and Hammond soon. So if anyone has them pre ordered, get ready. Also, they have some Ellie's and Hammonds up for pre order again on BBTS. For awhile they were all sold out, but there are some up right now.
Top

Super Camel wrote: ↑
Thu Jun 24, 2021 1:28 am
Just got e-mails from BBTS saying to expect my pre orders of Amber Collection Ellie and Hammond soon. So if anyone has them pre ordered, get ready. Also, they have some Ellie's and Hammonds up for pre order again on BBTS. For awhile they were all sold out, but there are some up right now.

Same! Once they fulfill, I can cancel the POs I tried with Target and Amazon!
Top

Do we think any of the smaller versions will be re-released again in multi-packs? I don't really follow this line, but picked up a sale Ellie/Hammon 3 3/4 Target set. I'd like to get the main crew and hope that some repacks/multi-packs of Malcom, Grant and Muldoon might be in the pipeline.
Top

Sattler and Hammond hit my Pile, so I shipped that Loot!
Top

My Ellie from BBTS shipped!
Top

Did anyone know there was a Super Colossal Carnotaurus "Toro" from Camp Cretaceous coming out? Someone on Facebook posted that they found one. It looks good. I will have to hunt one down.

16 inches tall and 3 feet long. Shipping was free so I had it shipped to home.
Top

Just bought the Carny for my son’s birthday this week. It is large and in charge!
Top

The figures are pretty much what you’d expect if you have the previous Amber Collection figures. The sculpts and articulation are fine. Both have pinless double elbows and knees.

Hammond has ankle hinges that pin into the shins, no rocker, but he’s stable enough to just stand there.

Ellie actually has hinges that pin into the boots, but that makes them bend at the top of the boot rather than where her ankle would be anatomically.

Ellie’s hands are huge thanks to the plastic wrapping around the hinges.

Hammond’s likenesses are ok, the eyeglasses were kinda shifted in the package so he had a kinda shocked look, but they settle into place. I’ll be leaving the hat head on.

Ellie’s likeness is not as good. The paints suck but even the sculpt doesn’t really resemble Laura Dern (who Hasbro was able to capture with Admiral Holdo pretty well). The non-eyeglasses head is worse, just looks kinda dead in the eyes. The eyeglasses head is smiling and at least has some personality.

Neither come with a stand. I thought they’d at least have the new clear stands. 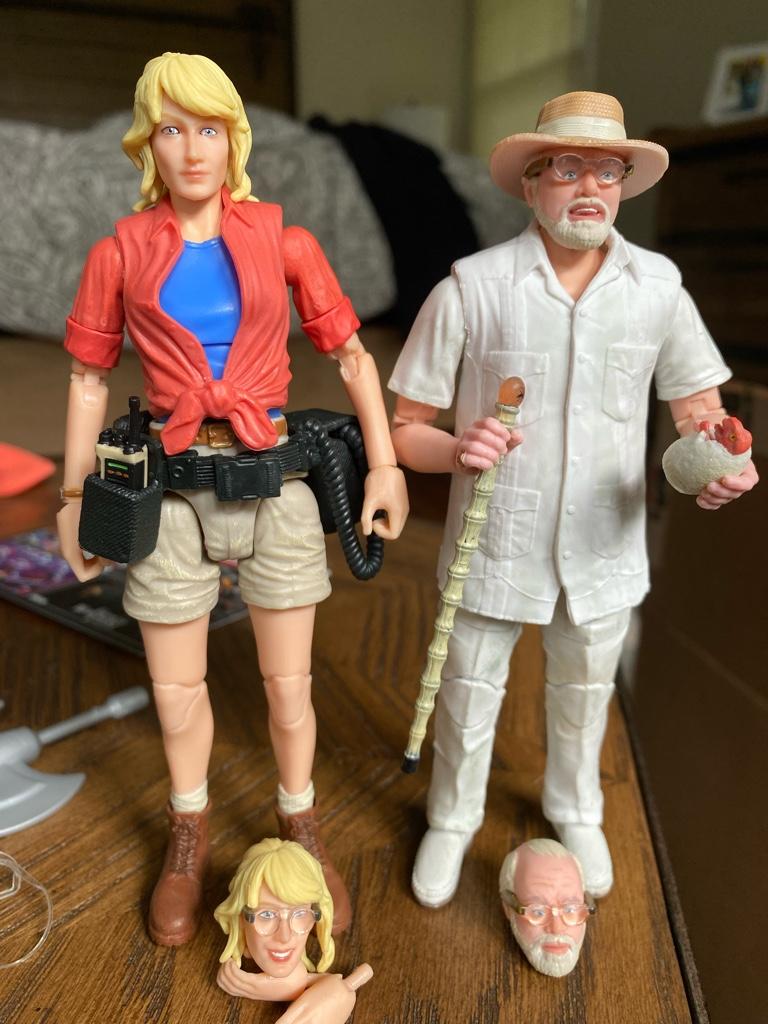