Ugh, wonderful, thank you so much, Hasbro.

Just found a Black Ninja this morning. Only found one, and the unmasked head has black smudges on a cheek & the forehead.

There was no Blue, and still no Pink (yet 5 White). Does anyone have the Target links, please?
Top

Just found a Black Ninja this morning. Only found one, and the unmasked head has black smudges on a cheek & the forehead.

There was no Blue, and still no Pink (yet 5 White). Does anyone have the Target links, please?

This guy is hanging out my store. 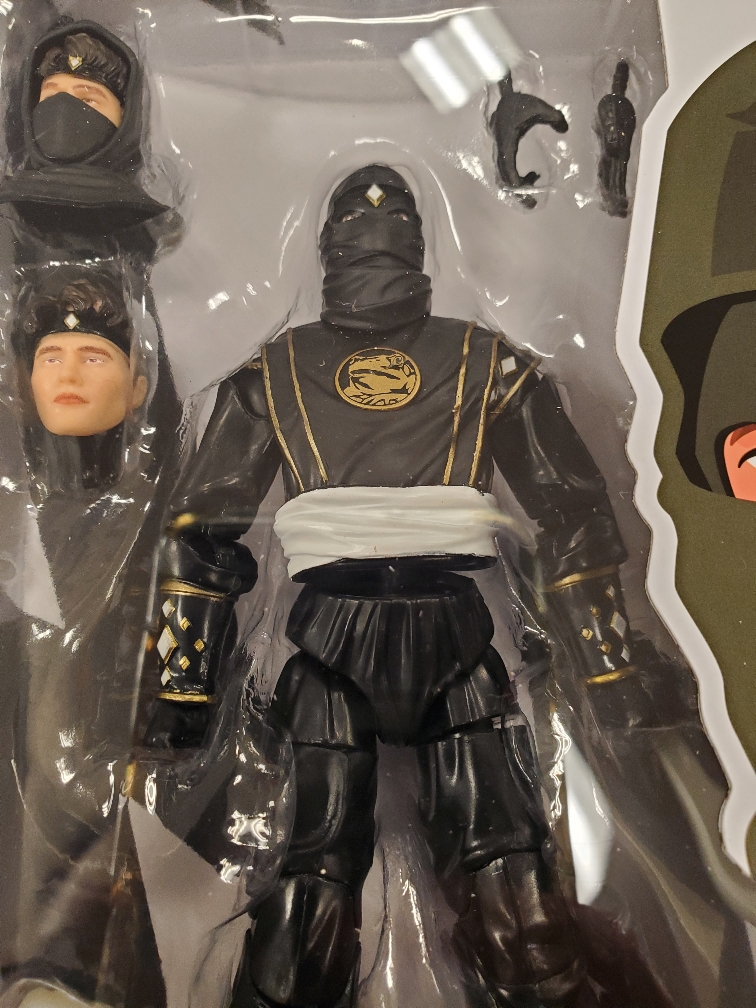 Thanks again, Sephiroth! Just placed an order for Kimberly! Fingers crossed it doesn't get cancelled, is the right thing, and doesn't look like crap, lol.
Top

Are the Red, Yellow, and Pink Ninja Rangers supposed to be showing up soon? Or are they scheduled for later in the year? The White, Blue, and Black Ninjas get results in Popfinder but the other three don't. Maybe they just haven't arrived in local stores yet, but the Popfindr page doesn't show any store results.
Top

Red, Yellow, & Pink (Kat) aren't due out until later in the year.

Grabbed Blue & Black at Target this evening. Haven't had a chance to open them yet, but paint apps & face printing look good on both.
Top

I nabbed black and blue today as well. They could only find 1 of each in the back even though popfindr said they had 8 of each. Not sure why they couldn't find them. The paint on the faces were all pretty good. A couple minor issues I can fix with Adam. But the Billy figure itself, my gods, it looks like someone let their dog chew on it. There are so many chips and deformities in the actual figure and plastic. And it has the giant gap on the thigh cut on the right. I'm gonna go to another target that has them and see if I can find a better one. I'll check paints and such of both. But for them only finding 1 of each, the paints were surprisingly good. And my Adam's foot is perfectly fine. I looked in store before I got him, and opened him in the car before I left. Still may replace him with a better paint if I find one. But it's not necessary. Also they rang up 24.99, so no need to price match the app.

Saw the black and blue at Target.

Nifty. But Billy looked like he was 65 years old.

I don't care enough to get these guys but they're fun to look at.
Top

The molds are pretty good. Some of the best of this line. But they're not without their flaws.

*edit* So I just got out of the other target. It did not, in fact, have 8 of each. It had 16 blue and said it had 8 of each. So somehow, their system registered the other case of black as blue. Or cases, if its 4 a case. Not sure the count per case. Of those 16, I went through all of them, only 3 had acceptable paint on the heads. And only 2 of those 3 didn't have many plastic deformities. Most of them had the left leg falling off at the thigh joint, or it looking extremely loose, or they had other chips, scuffs, or damage of some sorts. And quite a few of them also had something I haven't seen before, where it looks like there may be residue, or scuffing, something on the face that shows the nose and eyes. Not the completely covered head. Or the one with just the headband. I don't know what it was, but it didn't look like it would come off. Just a heads up, to look at all these issues. The one I chose from that location was acceptable enough that I can probably mix the 2 I have now and get one I only have to paint a little. Do some touch ups as it were.

Found Pink Ninja this morning. So I’ve gotten all 4 so far. Had each store price match their website price of $25. The store with Pink wanted to charge me $30. Just a long wait for Red Ninja.

I’m not a PR fan, but I like the fully masked/hooded look of these. Reminds me of the classic Chinese Super Ninjas kung-fu flick.
Top

Is the single box Cog the same as the grey Cog from the two pack?
Top

yojoebro82 wrote:Is the single box Cog the same as the grey Cog from the two pack?

I *think* the gray plastic is different.

It very well might be. When I opened my two single packs at my mom's, I noticed translucency that wasn't apparent on my two-pack. Friday nights are when I finally get to relax, watch some movies, enjoy some action figures. I'll take comparison pics later today if someone else doesn't beat me to it.

Found a BUNCH of Blue Ninjas last night (with an equal amount of Black Ninjas, and a slightly lesser amount of White Ninjas). The best unmasked head unfortunately had a severely miscolored thigh, so I went with the second best unmasked head. Kim is still in transit, still haven't seen her in store. All stores have had them marked & ringing up as $24.99. Can't wait for Red/Yellow/Kat!
Top

I found a ton of black and blue Nijetti, picked the best ones, and cancelled my PO. Still waiting on Pulse for my Kim. Tempted to grab one of the bad-paint Tommy's and repaint it into a Green Ranger version.