I am reallly excited for that Astronema and Ecliptor 2-pack. I was not a Power Rangers fan back when the show was airing, but I remember buying the original Ecliptor figure to slide into my Toy Biz Marvel display as a cosmic villain just because I thought he looked so cool. So that's a figure I was connected to before I ever watched the shows. In Space was probably one of my least favorite iterations of the Rangers, so I ignored completely the first 2-pack with Astronema, but this version looks so much better, so I won't be mad at getting her too.
Top

I know it's not a popular figure, but King Sphinx is 8.99 on Amazon.

Sent from my SM-G935P using Tapatalk

Trunks3540 wrote: ↑
Tue Jun 22, 2021 4:07 am
Shes alot like my ex. Changes her hair alot but has the almost exact same outfit a bunch of times. Only slightly different. I wonder if that's why I like her so much lol.

And I always liked Zhane and I coulda swore they were a thing. Till she showed up in Lost Galaxy without him. Then I was a little sad.

Astronema and Zhane had a date in an episode, but they don't really follow up on that. Zhane was with Andros when they found Astronema given that evil chip to suppress any good out of her.

Yeah, I was a Zhane fan as a kid. The silver suit was cool and he had his own black civilian uniform.
Top

I just bought Sphinx for $11.99 the other day - and now it's at $8.99? Walmart refused to adjust the price so I ordered another and the ugliest one is going back at the higher price. Ridiculous.

So is it now more than anecdotal that the Monsters subline failed? Was it the height or the price?
Top

I bought the Sphinx figure at full price and actually think it's pretty good - except for the paint job. A quality paint job makes it a ton better.

But, I just added another Sphinx at $8.99 to a Wal Mart order to qualify for free shipping.

Also the Alpha 5/Zordon pack is down to $17.99 on the Wal Mart site. I hadn't bothered with it previously but at that price it seemed worth it.
Top

I ordered 3 Sphinx figures at 8.99. Going to customize them. The figure itself is not bad, but the lack of paint and it being way out of scale were not good for sales. Plus it isn't terribly accurate to the actual suit.

Oddly, Pumpkin Rapper went up and has ticked up a dollar every couple of hours. Now up to $21.05. Makes sense since the scale of that figure was much better with the body being roughly the same as the rangers. If they sat the head lower it would be perfect.

Oh, and Dino Thunder Red is only $8.24. MMPR figures end up being twice the price, but any other team tends to get discounted deep and we wonder why Hasbro focuses more on MMPR...
Top

JPC wrote:I just bought Sphinx for $11.99 the other day - and now it's at $8.99? Walmart refused to adjust the price so I ordered another and the ugliest one is going back at the higher price. Ridiculous.

It hasn't officially failed just yet. There were 2 more on the way but they may have cancelled them. If so, I would think it would be a mix of things. Them scuing a little bigger, the shitty paint jobs, and the fact that both of those at a $30 price may have hurt the figures. I think if they did them as a pulse or fan channel thing they would've done better. Less units, and only really hardcore fans would probably buy them. And being exclusive kinda would make some people want them more. And King Sphinx has technically 3 different suits. I posted pics of the differences a long while back. The figure is a mix of all 3, with missing paint in places it should have some, mainly the mouth and nose. But once those are painted he is a really cool figure.

Zhane was always cool for his backstory. The actor wasn't the best. But his story was cool. His suits were cool. His Zord was cool. His weapon was cool. And he was in love with a villain. That was a perfect storm for him in my eyes to make him one of my favorite rangers.

Not all of the other teams go on deep discount. The Beast Morphers figures are still holding strong around $16 or so on Amazon. Which isn't super deep, but less then retail granted. And some of the others like SPD Anubis and Magna Defender are above retail. But MMPR has the nostalgia factor. It always will. It will always outsell everything else because of us kids who grew up with it, when it was new, and cool, and something we'd never seen before. Take into account some seasons aren't looked too fondly upon, and some suits aren't always either, it makes sense. Doesn't mean people aren't interested. It just means not as many. Even in ML alot of people were pushing for some of these not so popular characters to get made. And they did. And then they peg warm, because most people don't know or like the character. So once the die hard fans get theirs, who also usually preorder online, the rest sit. Even SW has their own. I know a ton of people wanted Grief and Kuiil made from Mando. But those are the only 2 SW figures I ever see on the pegs. No matter where I go. And I think Kuiil was down to like $11 or something on Amazon. Its just the nature of the business. But if they just stuck to mmpr and their sequel seasons, eventually the line would die, cause we'd have everything, and there would be nothing for us to want. But making all the teams, at least they make money still from the die hards. They'll just end up probably making fewer units, and making some exclusives, or 2 packs. And every so often rerelease the MMPR team, maybe with slight differences and improvements to make people buy them a 2nd and 3rd time. I know I wasn't going to, but seeing Leo on sale I nabbed one for the Bazooka and new head. I don't hate the old head, but the Bazooka and new hands, with the new head, made it worth it to me. I already preorderd all the Sparkle Rangers. And the Kat and Aiesha 2 packs. I know alot of people are all in for this. Just like me. So they have an audience. New, old, redone, new hands and weapons, sadly, I'll buy it lol. Monsters, villains, almost every team (haven't touched BM, *may* skip Operation Overdrive, but probably won't), army builders (multiples). Honestly the only line I'll do it for.

Interesting about Dino Thunder discounted in the states..

I've been seeing a lot of DTs left on the pegs at various Walmarts in Toronto, Canada.. 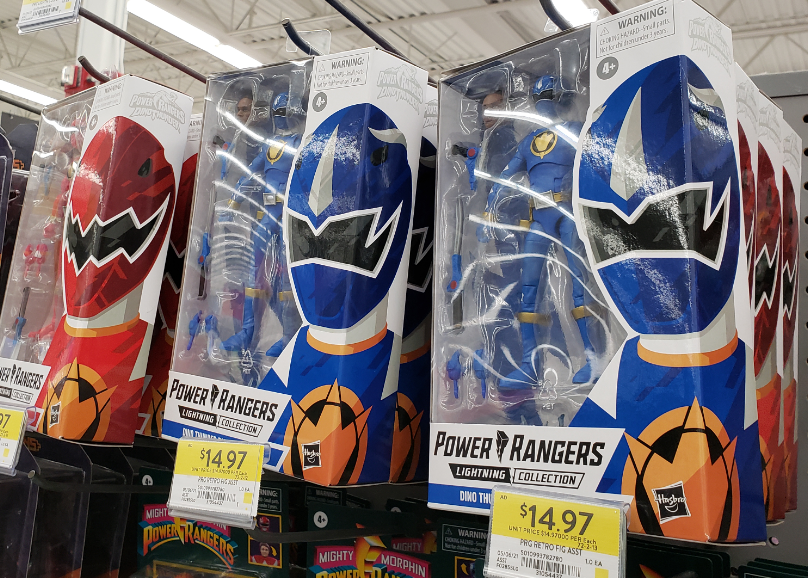 Perhaps Black and Yellow will be exclusives, like White was.
Top

Or the lack of basic paint apps?
Top

Pumpkin Rapper has the swappable pumpkin heads so that probably accounted for it looking to sell better. Some fans would buy multiples to make a pumpkin head army. I don't think scale has much to do with it other than it's oversized, but still smaller than the Megazord Hasbro just released. Not painting the nose and mouth was a very bad choice since it's so noticeable. Maybe they hoped a big sphinx monster would pop on a toy shelf for parents or other non-PR collectors, but when it's so obviously missing point on its face, it just looks bad. It's like not have the visor black on a ranger helmet.

Beast Morphers Red and Blue came out in fall 2019 so Amazon has been stuck with them for a while. I know Red was 3 per case and I believe Blue was too.
Top

I've been seeing a lot of DTs left on the pegs at various Walmarts in Toronto, Canada..

Perhaps Black and Yellow will be exclusives, like White was.

That's crazy. Cause they weren't even in the same wave. And DT is one if the more popular series. The only ones I saw like that pic were BM blue and red. Nothing else hangs around here very long for single card. 2 packs I see alot, but those are technically different.

Part of that may have been that I believe those two were heavy packed with really good supporting short packs, which people would snatch up prompting reorders.

I still don't understand why they won't heavy pack or at least double pack army builders. At least from more popular seasons or better designs. I doubt they'd peg-warm. They may linger a bit, but not rot. I guarantee there would be people who would be browsing and impulse buy "just one more..." if they saw it lingering and there was nothing else to buy that day.

It’s funny hearing about the possible lack of interest in Dino Thunder Rangers. I’m a very casual MMPR collector and the Dino Thunder suits are the only other versions that really appeal to me as a toy collector who knows very little about the various iterations of Power Rangers.
Top

Never seen any DT Rangers in Europe yet...
Granted I'm only interested in DT Black...Because you know why.
DT White is also interesting but I don't to go the extra length to get a fixed head...it's bothersome.
Top

zodach wrote:It’s funny hearing about the possible lack of interest in Dino Thunder Rangers. I’m a very casual MMPR collector and the Dino Thunder suits are the only other versions that really appeal to me as a toy collector who knows very little about the various iterations of Power Rangers.

Yeah I don’t know anything about them, but the Dino Thunder Rangers look the coolest to me. Very cool as action figures.