Reefer Shark wrote:That custom t-rex looks really nice, too bad its got the issues you mentioned. I think it would still work well in your display idea as a static figure like you mentioned.

I feel like the Amber raptors would look a bit too big next to them though, being different scales and all. Unless you’re going for a foreground angle perspective thing?

No I’m not trusting these in the display. They’re Faberge eggs. Each one was $750 a pop and again made of hollow resin so they’re extremely brittle. ( and the dude even wanted me to pay double for the repairs but not to worry, after the heads snapped off I contacted PayPal and asked for a refund on the entire order and the repair work because the dude had bait and switched me hard so I technically got these for free, even after the repairs were completed. That’s partially the reason why I was banned from his Instagram and why I’m not going out of my way to mention him by name. I don’t want to have him take any of you for a ride.) Don’t get me wrong, the figures themselves are gorgeous, they’re nice to look at, they scratch a 25 year long itch since the Buck and Doe T-Rex from TLW is my favorite rex pair in the JP franchise, but super poseability is a bit of an oxymoron in these figures so they’re unfortunately not super functional . Even as a static figure the paint can scratch against the fake vegetation or the resin could oxidize under any light source. I’m not willing to take that risk with these figures since they’re now one of a kind. If I were going to put any Rex figures in the display it would be the Hammond collection rex figures because at least I can find those in any target for $50. But sadly they’re just a tad too small for what I had in mind since they only clock in at about 9” tall or so vs the 10 1/2” I was hoping they would be. So again, the display dedicated to figures from the novels is looking like the best bet. And it’s not a total loss. I have read the books well over a dozen times in the last 20 years and they hold a special place in my heart.

In regards to the Amber Collection raptors. They scale well enough with the 3rd party T-Rex figures but not so much with their Hammond Collection counterparts . If you go back and look at the poster from my previous post and compare images, the third party rexes scale better with these raptors for sure. 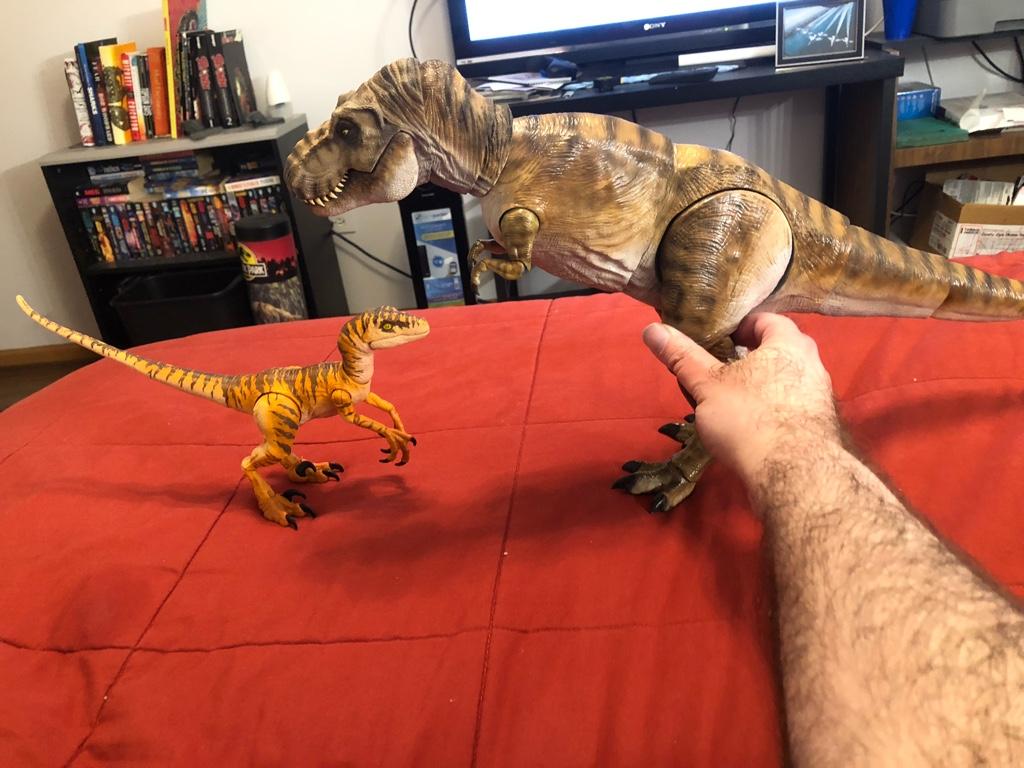 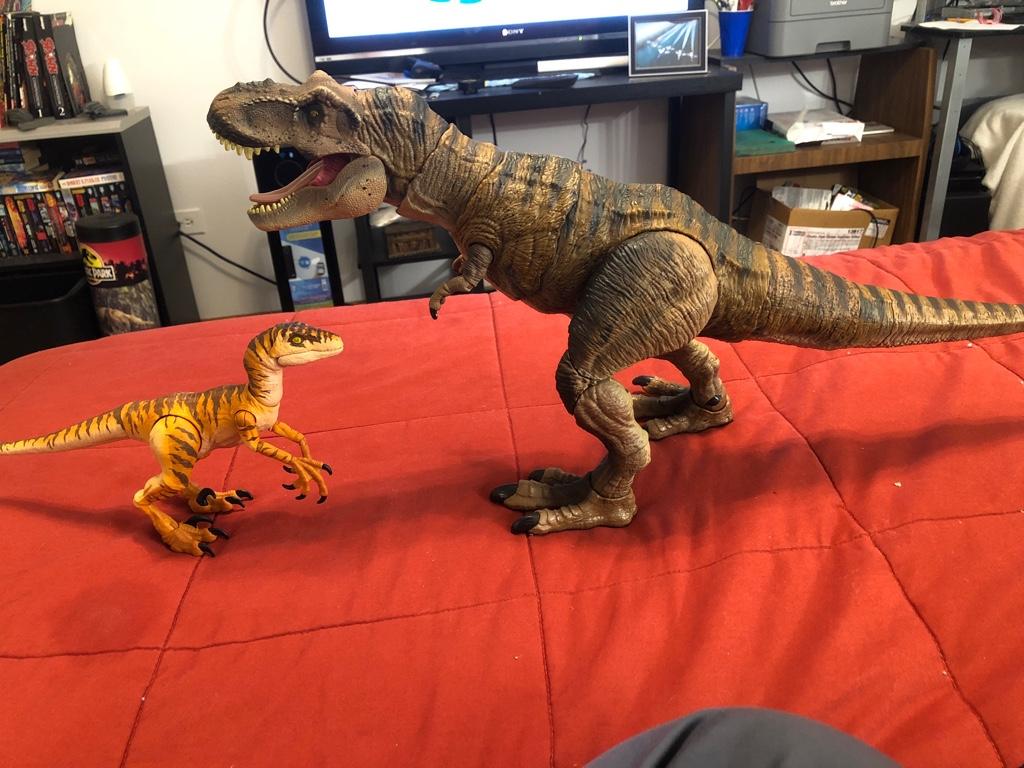 I had to post, $45 on preorder at EE. I wonder how big this bad boy is? About $2 less than a Hammond T-Rex. Quite a tradeoff between a dino with electronics and web missiles vs one with better articulation and paint apps. 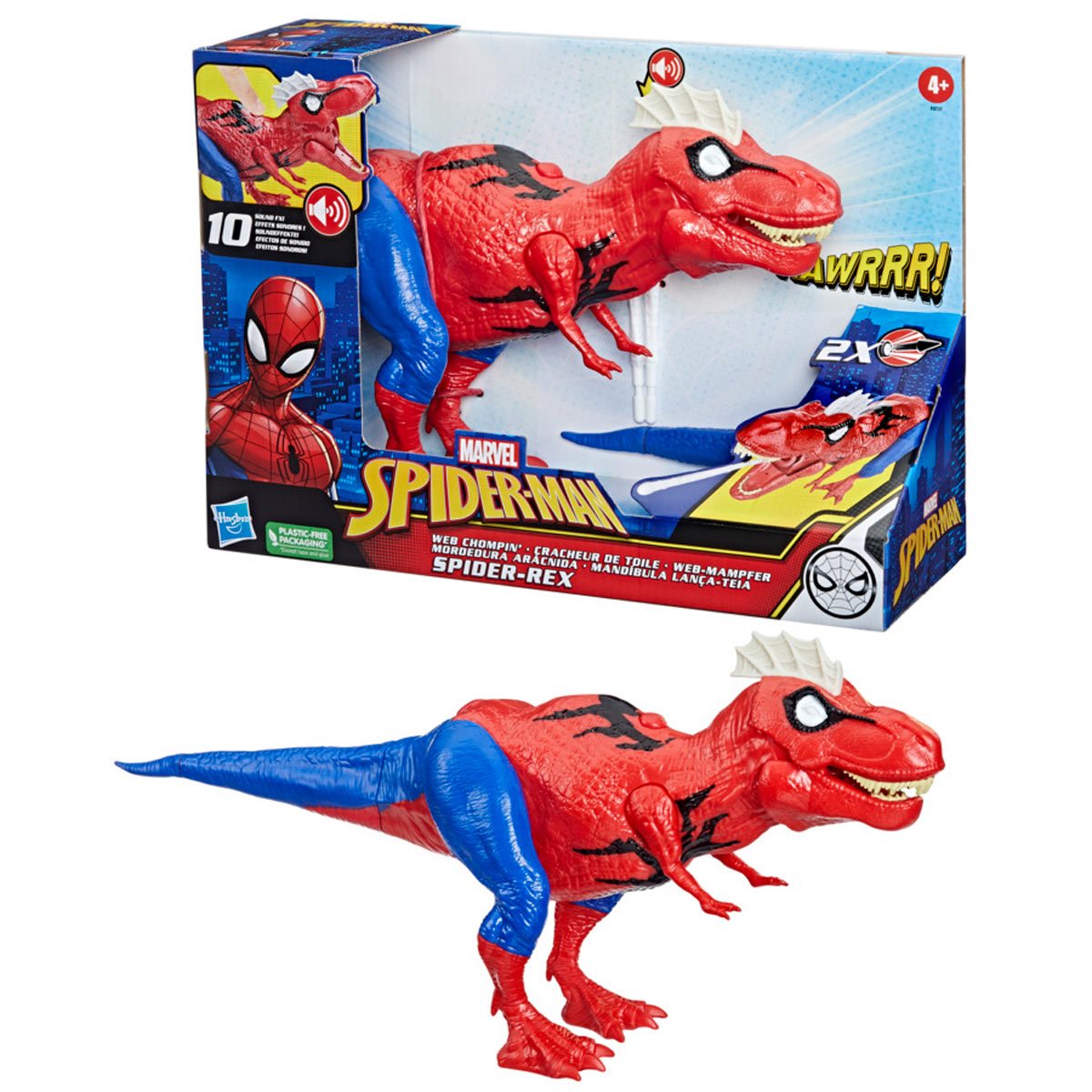 It’s definitely the electronics that over inflating the cost of that figure. Without them that toy would be worth about $10

mrboshek wrote: ↑
Sat Aug 06, 2022 10:12 pm
I had to post, $45 on preorder at EE. I wonder how big this bad boy is? About $2 less than a Hammond T-Rex. Quite a tradeoff between a dino with electronics and web missiles vs one with better articulation and paint apps. 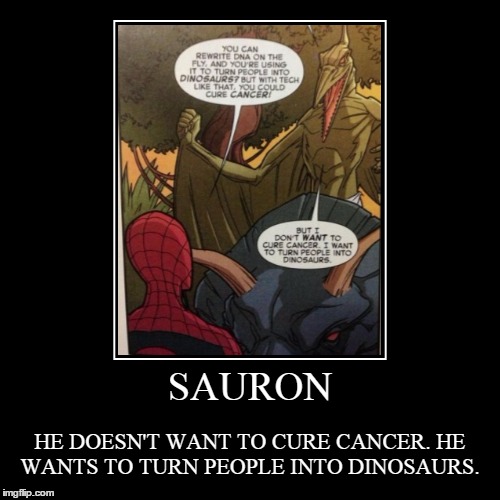 It’s like if John Hammond and Curt Connors created a science scholarship program that went horribly awry and yet still the program was a runaway success and Sauron was the end result. He’s basically an upper classman and on the fast track to getting his doctorate, and yet, evil mad scientist who is bent on devolution and reverting humanity into dinosaurs. Can’t tell if it’s a bug in the scholarship’s mission statement yet, or a feature. There’s a lot of fine print and I’m sure Empire State’s and Ingen’s attorneys are looking into it.

I’ll buy one when it ends up on clearance, maybe throw some extra paint on it.
Top

So I’m just curious but was anyone able to snag one of those Hammond Rex figures with the outhouse and Genarro at SDCC? How does it look in person?

Found a ton of new stuff at Target today. They've had the Hammond T-Rex fairly consistently for the past 2-3 weeks, but today they also had the Gallimimus, Grant and one each of the Triceratops and Ceratosuarus.

They also had at least 6-8 of the Sarah Harding/Stegosaurus set for the regular line. I had to pass on it today because I bought a bunch of other stuff, but seeing all of those on the shelf made me feel pretty confident that I'll be able to find it again.
Top

Yeah, my Target had a pretty big output yesterday when I went too, including a bunch of both TLW Legacy sets; I was really tempted by the Sarah Harding set- I love the green/brown color scheme, and I just love Stegos in general (and have somehow not added any to my collection yet). I even had a Target Circle coupon for $10 off $50 or more, but I couldn't pull the trigger just yet. Money's been tight, and I'm hoping she'll end up like the other Legacy sets so far and go on sale soon.

As I type this, too, I got shipping confirmation from Amazon for the Giga, which I forgot I ordered a while back. For all those who have it- how do you feel about it? I finally saw it in store a few weeks ago, and it seemed a little bit too small. Then again, I didn't have any other dinos next to it to be able to compare. Also seemed super wobbly/loose because of its gimmick. I liked it well enough in the movie, but the toy seemed a little underwhelming. Has anyone else had those thoughts and been pleasantly surprised?
Top

Is anyone preordering the Dreadnoughtus? Honestly that sucker is so tempting but where on earth would I put a hunk of plastic like that without setting off every motion sensor in my home?

I've got Dreadnoughtus on order. Hoping it fits on top of the two bookcases I am using for the JP stuff... But yeah, there is a chance I won't be able to find a good spot for it.
Top

fac wrote:I've got Dreadnoughtus on order. Hoping it fits on top of the two bookcases I am using for the JP stuff... But yeah, there is a chance I won't be able to find a good spot for it.

Yeah I’m going all in on Hammond collection after some deep introspection. I still might paint one t-Rex to look like a bull or I might leave them alone to look like the rexes from Michael Crichton’s novels. I haven’t decided yet. But as long as I’m going to have to maintain the mindset that my custom 3D printed Rex figures are Faberge eggs of my JP collection, then the Hammond Collection Rex figures are going to have to be my quintessential go-to super articulated JP Rex whenever I’m looking to mess around with a functional figure.

I've had Dreadnoughtus for a few weeks now. When put vertical it is taller than my wife! The long tail is needed to stop it toppling over head first- such is the length and weight of the neck and head.
Top

scribb wrote:I've had Dreadnoughtus for a few weeks now. When put vertical it is taller than my wife! The long tail is needed to stop it toppling over head first- such is the length and weight of the neck and head.

Wait please explain?? I mean we already knew the entire length of the body was 5 feet across, but are you saying that this figure is also 5 feet tall if just the neck is fully erect and all 4 limbs are fully planted on the ground, or are you merely stating that when you try to balance the figure on its hind limbs it’s 5 feet in the air? 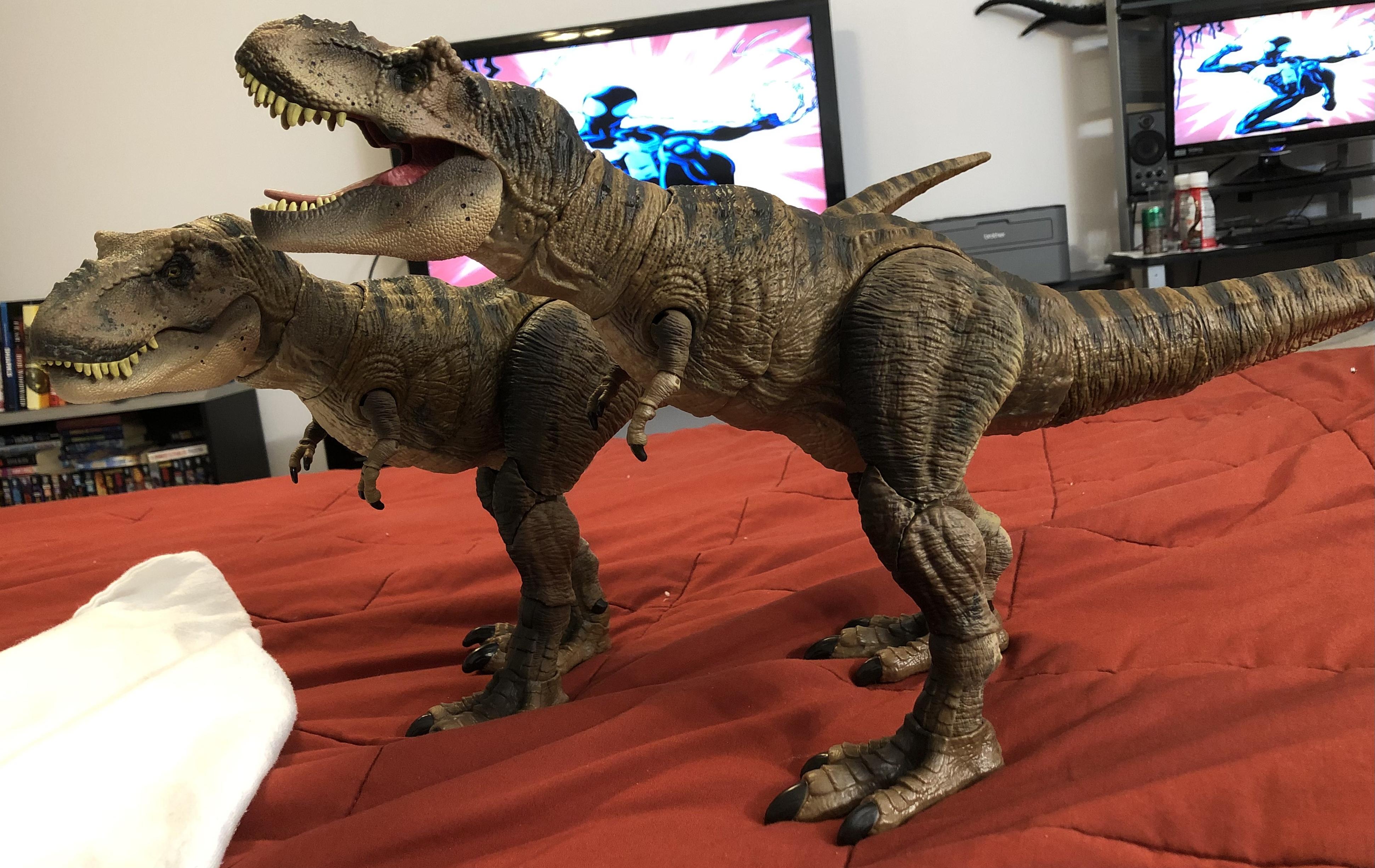