There is a strong rumour that IDW is losing the GI Joe and Transformers license and it maybe going to Image Comics, namely Robert Kirkman’s Skybound imprint.

This is really exciting as I feel they will do an amazing job with the license.

Will you be checking it out when it happens?
Top

I won't start reading a "new" GI Joe continuity cause they've done that a dozen times since Devil's Due and their atrocious art attempted it in 2001.

I will continue to get Larry's monthly issues, cause even though the art's not good and the stories are all over the place, every now and then he delivers an absolute gem. I think they stated they wanted to reach issue 300. Not sure if they'll call it quits after that.

Larry's Joe is the only Joe that's ever existed for me in the comics. Can't see that changing just cause of a logo in the top corner of the cover.
Top

I'd be willing to give it a try if it goes to a new publisher. As much as I love G.I. Joe, I haven't truly clicked with a Joe comic since Hama's run in the 80s. I think part of the reason is that I haven't found a writer that can strike the balance between fun and realism that I enjoyed as a kid.
Chuck Dixon's run with IDW held promise. Chuck's book definitely had a realistic military vibe and he wasn't scared to use outlandish sci-fi concepts like the MASS device. However, his Joes had no real personality.
I will say Christos Gage's Cobra books were amazing. The problem for me is that his work didn't translate that well when writing Joe team books. He lacked Dixon's and Hama's military knowledge.
I even picked up Hama's return to ARAH. I gotta say I wasn't feeling them. It's kinda like Lucas returning to do the prequels. His writing just felt corny to me as an adult. Funny thing is, his style hasn't changed much from his Marvel run but I still enjoy those books infinitely more than his IDW stuff. Maybe it's just the nostalgia that makes me enjoy the Marvel stuff more.
I gave another IDW writer a chance. I can't remember her name but she was award winning author known for spy/military stories. I was bored to tears with her stuff. It felt very real world but absolutely boring. She reimagined the Joes as some sort of Tom Clancy espionage team. No distinct uniforms or vehicles. The over the top military action was replaced with political intrigue.
Now I think IDW is doing some dystopian storyline where Cobra has taken over and the Joes are an underground rebel group. Decided to pass on it after reading one issue.
Top

Check out GI Joe Saturday Morning Adventures. The art looks exactly like the old Sunbow cartoon......as if they raided old, unused animation cells and created a comic out of it. Best of all is the final page which is a PSA homage and my just be the single best comic page published this year. 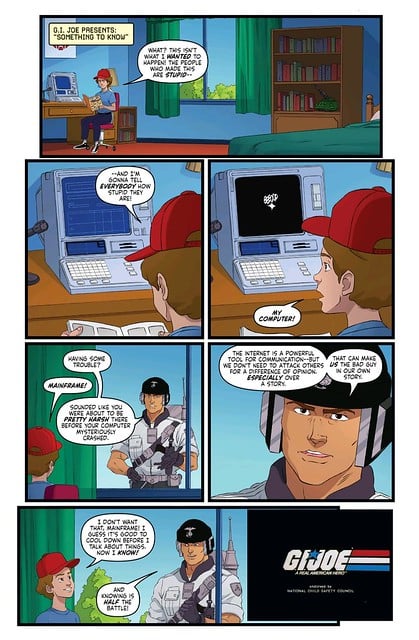