Apparently that Bob Dylan guy was right; the time’s, they really are a changin’. It was once a popular belief that “female figures don’t sell.” But whether or not that was ever true, the higher-ups must have changed their mind, because instead of a single figure, we have an entire box set of women. This might seem like a random assortment, but apparently the A-Force comic allowed for a rather diverse array of female heroes to gather together to fight crime. I haven’t read the comic in question, but it is on my agenda. Hopefully it will tell me exactly what a Singularity is other than a delicious-looking figure.

The A-Force box set went up on Toys ‘R Us during the insanity that was SDCC. It went pretty fast, with many people who ordered receiving cancellations. I got lucky and was able to get an order in before the cutoff. Hopefully this set will be plentiful very soon.

Six figures is a lot to take in, so I will hit the high points and the low points of every figure. As with all toys, I have some quibbles about certain aspects, but I have to give the set high marks for delivering a full complement of characters with the additional bonus of some debut Legends — one of whom no doubt brought a stabbing, blinding pain to one Fwoosher. 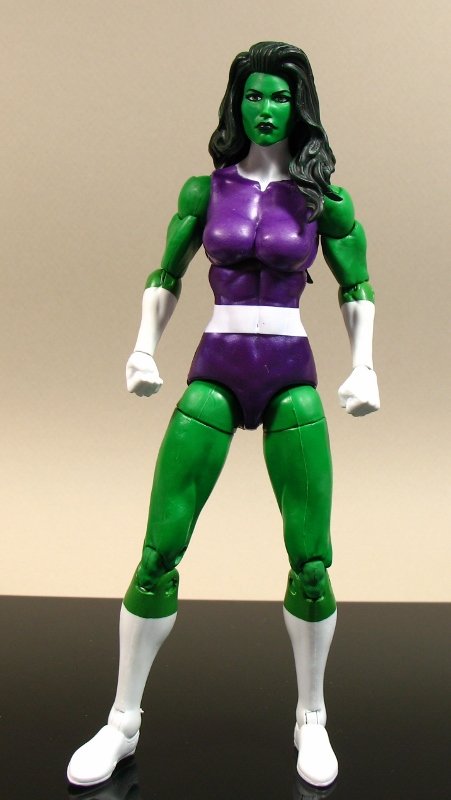 Okay, you know what? I’m just going to get it out of my system right now: I hate … hate … haaaate these upward-pegging, no good, sideways twisting, scrap-heap humpin’, counterintuitive, weak sister squawkin’, bedroom peepin’, no job havin’, yellow-bellied sapsuckin’ hip balls. I hate them with the fiery loin-boiling passion of a thousand thousand Flaming Moes. If hip pegs had a throat I would choke these out.

I wouldn’t have been mad at a bit more expression in her face, and pretty much all of these women-figures need a better forward range in their ab-crunches, but otherwise she isn’t bad. Unfortunately she isn’t great, but she has fists, so she has that going for her. It’s a shame, because I love She-Hulk and don’t feel like she’s had a truly great figure yet. So that Loki dude turned into a woman. I know there was a reason for it, at least I’d assume, and this is a figure of that strange, confusing time in a trickster god’s life. This would explain the man-hands she has going on here. It’s like the rest of Loki got turned into a woman but they stopped at the hands. Other than that, she’s a good figure, with a pretty head sculpt. Did I just call Loki pretty? First time for everything, I suppose. This keeps up the strange Hasbro tradition of releasing every figure of a character except for the one I want the most. Loki joins Beetle and Vision in that regard. I’m a bit shocked that we actually got a lady Loki before a classic one. And by “I’m shocked” I mean I’m not shocked at all.

LaLo (don’t call her that) has a new furry cape that kind of hinders her articulation any time you want to put her hands up. So it’s more so a “standing around looking cool” type of deal. If you want to put her arms up, you might as well ditch the cape. There’s no pegholes so it’s really only held on by her hair and hope. I have no idea what role Lady Loki played in the A-Force comic, but I assume there was snarkiness. Probably bitchiness too. Singularity is the big mystery here for me. I had at least heard of everyone else on the team, even if, like Lady Loki, I hadn’t read any of their particular stories. But Singularity was brand new to me upon first sight of the box set. Do you know how often I have actually gone “who the hell is that?” when I see a new Marvel Legend? Singularity was actually the first. All I knew is that it looked as if I licked her I would get blue on my tongue.

Regardless of what she does in the comic, THIS is the appropriate place to put translucency into a figure. While I am not a fan of Human Torches or Icemen that are translucent (no he’s not, shut up), Singularity seems ready-made for translucent plastic and special lighting, because it makes her swirly starfield look really cool.

She’s on the smaller female body, and despite the continuing issue with the lack of forward crunch in the abs (they all have that problem, and I don’t know why), it’s got a lot of nice articulation. Elsa has popped up here and there ever since her initial comic debut, but she no doubt hit the height of her popularity as part of Nextwave. Someone at Hasbro is obviously a Nextwave fan, and her connection to A-Force ended up being icing on the cake. She’s the only figure in the set to come with a a decent amount of accessories: two rifles and a handgun. One of her wrists has the up down swivel while the other has the side to side. The up down allows her a bit more dynamic range for pointing the rifle, where the side to side of her left hand is fine for her pistol. She can dual-wield her rifles. The trench coat and arms pull double duty in this set. I wish she had been given double-jointed elbows because as they are now she can’t really relax her rifle on her shoulder which is the ultimate wild west badass pose.

Elsa is probably tied for my favorite of the set. Even with the same issue of limited ab crunch and no double-jointed elbows, she’s a very fun figure with some neat accessories that make her a slight cut above. We have somehow managed to get very little Asgardian love despite Thor’s relentless attack on pop culture lately. Outside of Thor, Loki, and an iffy take on Odin, the rest of the Asgardians have not been doing so hot.

Sif is some smart if not entirely comic-accurate reuse of Angela, which means at least she was good for something. Ha! I kid. Kind of. She also reuses the same furry-topped cape that Lady Loki has, which means she suffers the same articulation issues as Lady Loki if you want to do anything but have her stand there regally. However, with the cape removed, she can do a lot more, including two-handing her sword above her head. Like every figure, she could use more articulation in the abs and arms. It’s great that we’re getting a lot of female figures, but I wish we didn’t have to lose a certain amount of articulation. It’s not enough to look good, they have to be fun toys as well. The addition of double-joints and a bit more motion in the ab crunch is the way to go for this to happen. The hips are finally improving quite a bit. Oh Monica. Captain Marvel. Spectrum. Photon. Flashlight. Whatever you’re calling yourself today. Clearly the toy overlords didn’t know what to call you either, because you’re just “Monica Rambeau” on the package.

So Monica here is not classic. I mean, you could hear jmoney’s heart breaking when her picture first arrived in this trench coat. Again, this initially was a Nextwave look that returned in Mighty Avengers and then carried on into Ultimates and A-Force, so it’s not just Nextwave anymore. Which is good, because if it was just a Nextwave look I would probably have pooped on it. I am still confused why a woman flying at light speed would want to wear a trench coat, but who am I to critique? Even if this version was dead last on my list, I have to admit that as a fan of the recent Ultimates book I can’t seem to summon up enough hate. I really would have preferred classic, and I would have even gone for the Spectrum look she had at the beginning of Mighty Avengers, but here we are.

It is doubly unfortunate that she shares a spot with Elsa as tied for favorite of the set. She poses well, the head is great, the choice of hands is nice and expressive with one open and one fist, and there’s no huge issue like sucky sucky terrible hips to make me rage out at her. It’s a nice, clean presentation of my least favorite look for her (that has grown on me only because of Ultimates), which means the pros and cons balance each other out.

The A-Force box set is, overall, a success, with six females, five of whom have never had an ML before (if you count Lady Loki as separate from dude Loki) released in an unprecedented way. The issues that are present are issues that continue to appear in every female figure (elbows, ab-crunch range), but as far as execution, She-Hulk is the only real downer, and that is down to her hips more than anything else.

I mean, I just really hate those hips.