Jakks Pacific is currently cranking out new World on Nintendo figure across a few different scales and at a pretty fevered pace. Overall, I am really happy with what we have been getting thus far, and their Bowser is currently one of my favorite figures. While I primarily collect their 4-inch scale line, some of their absolute coolest stuff just dropped in their 2.5-inch line, in the form of their new “8-Bit” figures. Mario, Luigi, Link, and Donkey Kong are all based on their screen appearances from their classic NES titles, and I love them so very much. Naturally, this gets the old gears going about what I would love to see from this execution in the future, so I have a Top Ten list to get us started.

Don’t get me wrong, there probably isn’t an 8-bit figure of any character that Jakks could make that I wouldn’t buy, but I am trying to be somewhat reasonable here. Frankly, getting the entire sprite lineup from the original Legend of Zelda would be a plastic dream for me, so, guys, if you are looking to go deep with this execution, by all means – GO FOR IT. Right now, these are mixed in with the standard small-scale figures, but I could honestly see the 8-Bit style holding well in its own line – these figures are certainly flying off the shelves around here.

So this is an early list, and I tried to spread the love around. My love for the original “Action” and “Adventure” series games runs deep, so there were a lot of options to choose from, but I think this is a pretty good list of what is cool but also popular and important. 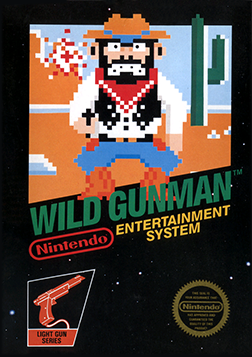 While the Light Gun is one of the most memorable features of the original NES, aside from Duck Hunt, most of the supporting titles don’t hold a lot of pop culture permanence these days. That said, I have some fond memories of Hogan’s Alley and Wild Gunman. The latter of which was, even by today’s standards, a fun concept of a quick-draw, shoot-‘em-up duel that could be a blast at times, and totally frustrating at others. The cast of opposing gunmen was very colorful, and while the five main outlaws would all make for neat 8-Bit figures, I am tossing my support behind the iconic gunman from the original game box, he would be very cool. 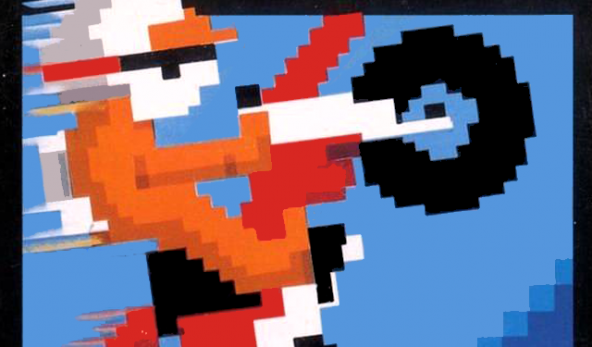 Man, did I have a great time playing Excite Bike as a kid. I was one of the few NES racing games that had good play control, and you could be competitive right away with the different track difficulties, and ability level settings. You controlled the red racer and I find that a figure of him in the iconic “wheelie” position would make for a really fun representation on my toy shelf. 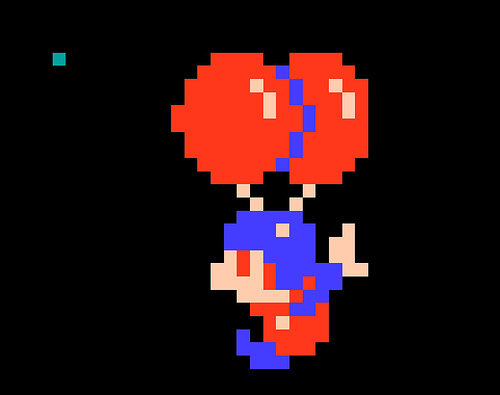 I did not discover Balloon Fight until I was a little older and decided to go back to revisit NES after my SNES playing time had grown stale. Balloon Fight is the perfect example of an 8-bit action game, and while the concept or story was nothing complicated, it is something that I can still play forever and be challenged by the later levels that seem to go on forever. You could play co-op so this figure would automatically lend itself to a color variant, which would be an easy was to expand the line even further.

In recent times, it seems like DK Jr. has been ignored, forgotten, or erased from Nintendo’s character lineup, but I have some fond memories of playing Donkey Kong Jr. as a kid. I mean, this game made Mario the bad guy, something that I don’t know would fly by today’s standards. When I think of core and historically important games and characters from the NES days, DK Jr. is definitely required. 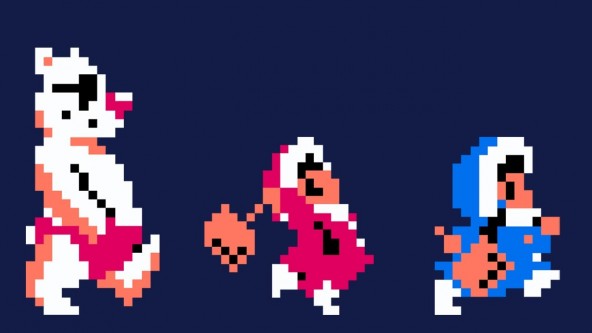 This was another game that I did not get to play much as a kid, but I always liked the concept, and I found the main protagonists to be pretty adorable. Like the Balloon Fighters, an Ice Climber figure would make for an easy repaint to include both players, so that is more band for the mold buck. Ice Climber has continued permeation in current titles like Smash Brothers, so I feel there is still a good amount of awareness for the characters. 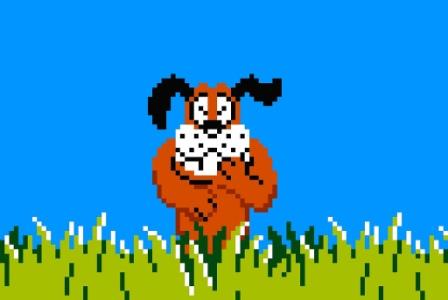 Okay, so this would not be a full figure, but I am not sure that anyone reading this, who has a genuine interest in getting NES 8-Bit figures, would NOT want a figure of Duck Hunt Dog depicted as he rises from the grass, laughing at you as you did not bag one duck on your hunt. That damned Light Gun would never let you take a shot at him in all his insolence, but, man, it would be cool and hysterical to get this little bugger. I could see myself needing multiples of this one for every room in my house and in my office at work. 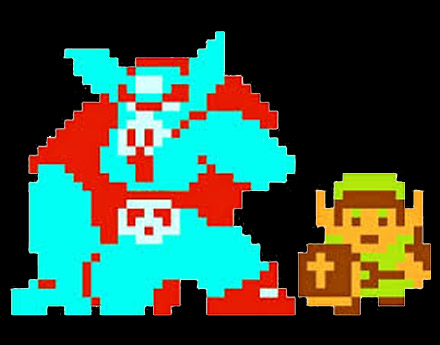 Link is my favorite World of Nintendo 8-Bit figure. After the Mega Man titles, the original Legend of Zelda is my favorite NES game, and probably one of my favorites of all-time. I am over the moon about the fact that I now own a green, blue, and red 8-Bit Link figure, but I am already wanting more. Like I said above, I will take the entire roster from the game, but main foe Ganon is a great place to start. He would need to be bigger than, say, Link or Mario, but I know this one would be a big seller, too. A hero needs a villain, and Link most certainly needs his Ganon. 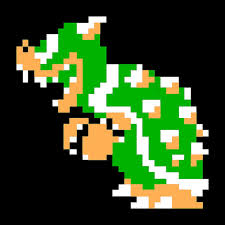 See a theme here? Link and Mario are the big timers from the NES world, and their entire rosters are just prime for this treatment. King Koopa, or Bowser (whichever  you prefer), would look great alongside Mario and Luigi, and his presence would easily open the door for Toad and the Princess as well. This guy’s facsimile was in every castle in the original SMB, so he was as ubiquitous as he was ferocious so I think this one is pretty much a no-brainer.

The next two characters are beloved, and so are their games, but damn it if they did not frustrate the hell out of me as a child. Kid Icarus … I loved you, I wanted to be good at you, but I was never any good at you at all. At. All. It is embarrassing how bad I am at this game even to this day, but that has not stopped me from loving the characters and design. Pit is still going strong in the World of Nintendo, and this game is responsible for giving us the character of the Eggplant Wizard (also required for an 8-Bit line), so you know the virtue runs deep. After Mario and Link, Pit shares the floor as the most iconic of NES heroes, along with … 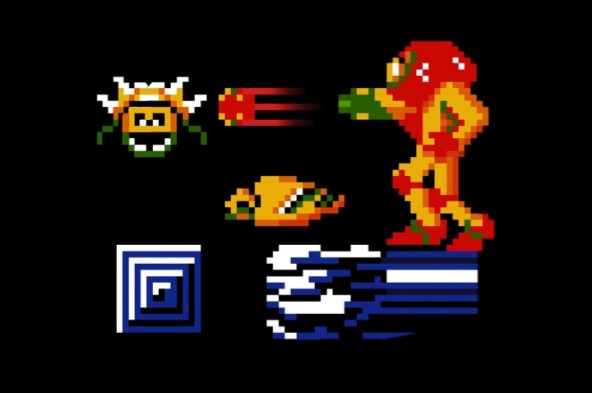 Samus. It was a bit strange putting together this list as it is mostly devoid of female characters, but in the ’80s, the ladies were mostly sidelined as damsels in distress, needing rescuing from danger by fat plumbers or elfin boys in short pants. Not Samus, though – you might not have known it until the end of the game, but Samus is a WOMAN in charge, fighting through one of the most challenging and scary games of the NES. We have Alien to thank for that, I would imagine, but the world of Metroid is really awesome, and no character deserves an 8-Bit rendition more than Samus.

So this is my list. I think of it as a starting point more than anything because I want to see as many 8-Bit figures as possible, but all of these are required as far as I am concerned. I know that Jakks’ license only extends to Nintendo-owned properties, but man, I cannot help but imagine guys like Mega Man, Simon Belmont, and others in this style. That is just daydreaming because WoN has a lot of character potential, so I hope it keeps going. Thanks for reading and sound off below with your picks! 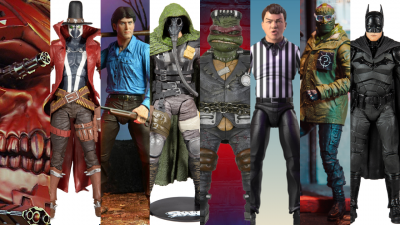