So what exactly is this thing? 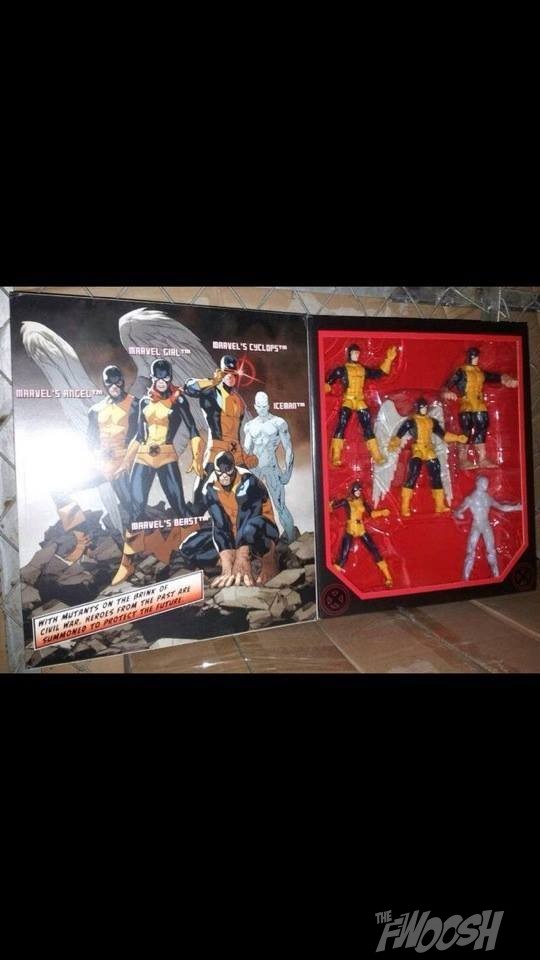 As most Fwooshers should know by now, a picture of what appears to be an original X-Men box set has been circulating like crazy across Marvel Legends fandom. People have been poking and prodding at this picture with the acute attention of an ant farmer, trying to figure out whether or not it is an official release, a custom, a hoax, or a collective figment of our imaginations.

If this is an elaborate custom-slash-hoax, it has to be one of the better efforts ever, with customized packaging and trays and all the bells and whistles.  I’m in the group that thinks this is official. It makes complete sense with the (unfathomable to me) popularity of the Bendis-written adventures of a time-traveling first class of X-Men, and all the better since they just changed into their speed-skater uniforms, rendering these just out of date enough to not be “modern-classic,” and now firmly planted in traditional toy company “slightly outdated classic-modern.”

Yeah, I know, I confused myself with that sentence also.  But you know what I’m driving at. Work on this would have started when the old young X-Men were wearing this in their new adventures in the present, which by now in comic terms is the past. So right on time!

OK, enough of that …

Let’s move on to the important stuff: the toys themselves and when and where they’ll be released.

First instinct is to say SDCC, but it seems extremely early for these to be popping up somewhere. The chain-link fence and the cardboard boxes suggest that they’re sitting in a warehouse somewhere and some intrepid toy fan sliced open a  box and took a quick shot of them. And then apparently didn’t bother putting them on eBay because nobody has discovered an early sale of them, so that guy doesn’t want to get rich quick.

SDCC would make sense following the X-Force and Thunderbolts sets of the previous two years, both of which brought major team-building power with comic synergy. But I have a feeling this is an attempt at a  retail box set — possibly even a last gasp bullet-to-the-sky trial to see if box sets are still viable in this format. It does have plenty working for it where other sets have failed. This has everyone in one set, is a popular team, has name brand recognition, and is movie tie-in.  I’m going to guess retail. I expect I’ll be wrong, but we’ll see.

On to the toys:

Cyclops and Angel are easy. They look like they’re on the bootcuff-laden BuckyCap body, with a brand new two finger visor-activator hand for Cyclops on his left hand. Angel appears to have brand new wings that will no doubt plug into his back like the Archangel wings. You can bet that these wings will be making an appearance in the future. Who wants a classic red-and-blue and white-and-blue Angel with these wings? Or an Archangel Angel with feather wings? Or any of the other winged characters. I know, right? In this reuse-happy climate when a new element is introduced you know you’re going to see it again.

Beast is on the appropriately thicker Hyperion body, with what looks like new oversized hands and feet. And again, something I’m really digging about this set is how it’s a straight shot right over to an early X-factor set with just an alternate paint job, which makes me really hope this will be readily available at retail, and not an SDCC nightmare. This has multiple purchase written all over it.

Jean is Elektra, but you can tell she at least has the new ankles like on the Jim Lee Jean Grey, so that’s a bonus. Those old ankles sucked.

Iceman is the one who’s body choice has caused the most debate. Is it the new Superior Spider-man body, or it it the Klaw/Vision/Silver Surfer body?

Unfortunately, It’s the SilverVisionKlaw one. debate over!

I’m 98 percent sure It doesn’t have the shoulder hinges of the Superior Spider-Man body, and it has balls at the hips. Now my hope is that they have at least found a way to get him some new shins and feet so he has better motion in his ankles, but I’m not expecting that at all, and I actually hope not, because that would mean they were trying to make this body viable for reuse in the future, and that’s no damn good. I’d say he’s a straight (Hasbro) Silver Surfer-styled Iceman.  Where you fall on that is based on your hatred of that body. I don’t much like it, but for somebody like Iceman I can allow it. It was wrong as wrong can be for Vision and Silver Surfer, slightly OK for Klaw, and about the same level of slightly OK for Iceman, whose icy physique is served well enough by the simplified body. In other words, I won’t bitch about getting an entire awesome set even if one body is hinky. Many will though, but that’s toy collecting.

Of course, I’d have loved the “snowman in boots” styled original Iceman, but ya takes what ya can gets.

I’d really hate for this to be an SDCC set because I’d like for it to make it to retail and sell like mad, and really embolden retail’s ability to take chances on box sets again. It could lead to a Giant Size set, or a modern Avengers set, or all kinds of low-tool high-return offerings. Regardless of how it comes out, though, it’s provided a jolt in the arm in the long winter months where Hasbro is quiet and the news doesn’t flow.