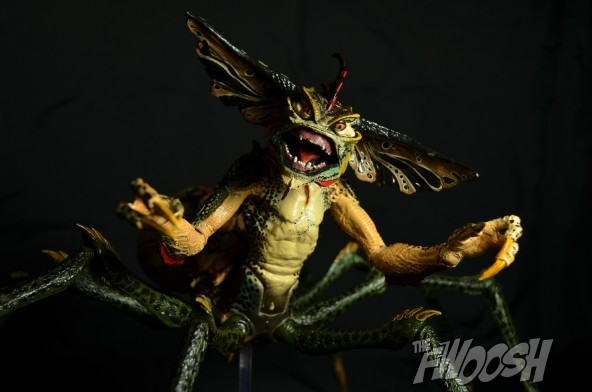 New toys! New toys! Well, it is early January and that is no time to allow hyperbole to rest just because we started a new year. If I remember correctly, January is not usually a huge time for new toys since the big year-end holiday rush just left all of our wallets crying in submission, but, so far, January has proved to be pretty fruitful in 2014. Between Spider-Man and Captain America Marvel Legends, the usual Masters of the Universe haul, and a few other things here and there, I have already gotten a heaping helping of plastic. So what better time than to throw around descriptors like “masterpiece” and “figure of the year”? I mean, why not? I just had to decide on the best toy of 2013 and that did not even ship until December, it cannot be too early, right? It is? Well, the fact remains that, no matter the timing, the brand new Spider Gremlin from NECA is a lock for a “best of the year” candidate, and it is most certainly a masterpiece.

Even with the amazing work NECA has been doing on all of their properties over the past couple of years, particularly on the Alien and Predator franchises, I still hold true to my assertion that my favorite property they are currently working on is Gremlins. Sure, that property probably means more to me personally as I grew up more with Gremlins than the other two (I was too young for them in the ’80s), but the mogwai and gremlins figures they have been producing have been as close to perfection as just about anything going right now. The recent focus has been on the underappreciated second installment, but all things being equal, that movie provided much more diversity in terms of look and characterization for many of the “little green men.” Their George and Daffy gremlins have been particularly nice, as has the Stripe mogwai, but you really cannot go wrong with any of them.

While I am sad that this line doesn’t get quite the amount of support as some of NECA’s other properties (for SHAME!), I am glad that NECA is continuing to support it and their offerings are really getting better and better. It seems as though fan support is certainly still there as well since NECA made it clear that a certain number of preorders had to be met for the Spider Gremlin to go into production, and that turned out better than I could have hoped. I am betting that this guy will turn a lot of new fans onto the property because he is just that outstanding, so hopefully we will get a chance to see the “WB” Gremlin, Greta, Mohawk 2.0, and beyond; they are just too good to stay out of our hands. 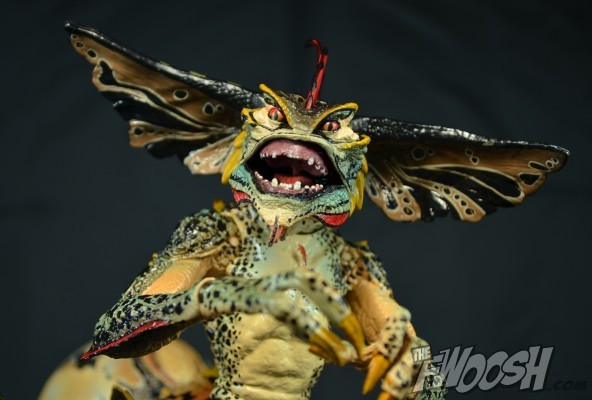 But this Spider Gremlin, while certainly the best NECA Gremlins item ever produced, might be the best thing NECA has made, period. I am really having a hard time organizing my thoughts around this figure, so I am probably just going to let the pictures do most of the talking. Once assembled (he comes in a box and needs to have his lower legs attached), he is absolutely stunning. In fact, I am willing to bet, if ever photographed by Matthew K, most people would have a very hard time telling if it was the figure or the actual puppet used in the movie. Everything is so spot-on that I am actually a little afraid to have this thing in my house, he might decide to come alive and enact violent hijinks in my living space. I am still admiring newly found details in every tooth, tail stinger, and leg spike on this bad boy.

I cannot decide if the sculpt or the paint applications are more impressive, but both of them are at the top of the heap for any action figure I have gotten recently. Again, the screen to plastic translation is scary and every little detail from tooth to claw is rendered amazingly. The only adds to the impressive look, and if you even attempt to count all of the paint applications on this figure, you should be considered certifiably insane. I cannot count any corner that was cut in accurately rendering all of the colors and details form the movie to plastic and paint plays a huge role in this. I honestly have no nits with this figure when it comes to paint or sculpt, but are truly outstanding. 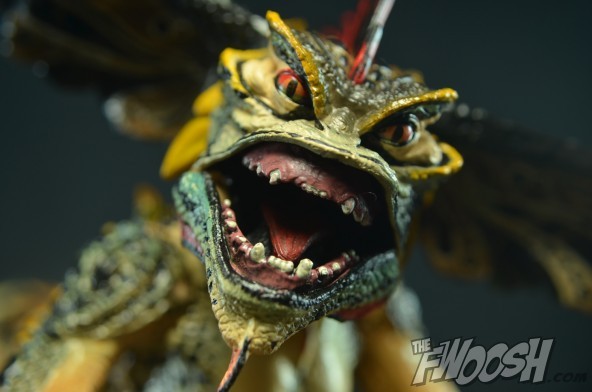 The articulation is nothing to sneeze at either, and while the figure has all of the standard points of most of the NECA gremlins, it also adds a movable jaw(!), abdominal crunch, ball joints at the tail and thorax points, and ball joints in two places on ALL of the legs. Egads, man! You have to assemble the lower legs out of the box, and I actually had to heat up all of the insertion points with a hair dryer in order to attach the legs, but it was a simple process, and, once they were attached, they stay together nicely. One thing to note is that the shorter legs are meant to go in the front, so keep that in mind while assembling as no instructions are included. 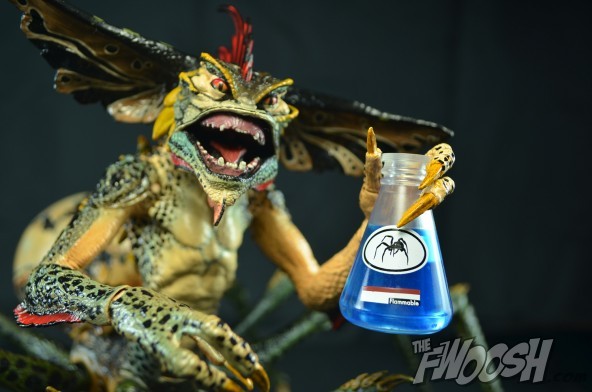 Adding the legs might just go to prove the most impressive thing about this figure – its size. I had seen this bad boy at SDCC in prototype form, but I must not remember being so taken by it because this figure is a true beast. In fact, while it might be the best part, it is also the source of my major pain point with this guy – where the heck am I going to put him? It looks like some reconfiguring of the toy room is going to be required because the gremlins need new digs. The Spider Gremlin has a diameter greater than 12 inches from front to back and side to side, and, as you can see in the pictures, by the time you stand him up he will tower over most of the figures in your collection. I mean, I have seen dogs smaller than this vermin and in this current market of downsizing and cost-cutting, it is really great to get an offering like this, and for under 50 bucks to boot.

I want to mention that despite all of the goodness of the figure itself, the Spider Gremlin also comes with two accessories: a reuse of the spider-serum beaker from way back and a display stand. The former is a nice little inclusion that did not really have to be there, but the latter is absolutely crucial because the downfall of this bad boy being so large is that he cannot really support his own weight; at least, I have not been able to get him to stand properly without it. At first I was a touch annoyed by this, but the stand itself is clear and the base is so small and unobtrusive that I have already forgotten about it for the most part. 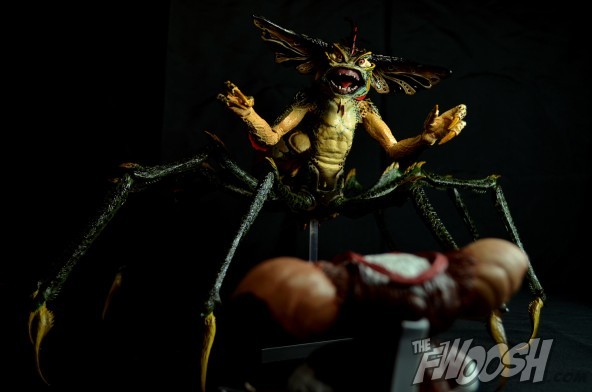 Yes, I am gushing, but, holy smokes, is this figure awesome. Heed the words of the old grandfather and know that it is possible that “you are not ready” for this figure. You have to be prepared to tangle with plastic awesomeness. Even if you do not own any other Gremlins pieces, I highly recommend this figure, and he is available on Amazon right now. But then you are probably going to need the Combat Gizmo for him to fight, right? He is on there too. Seriously, go now. Action figure awesomeness demands it! 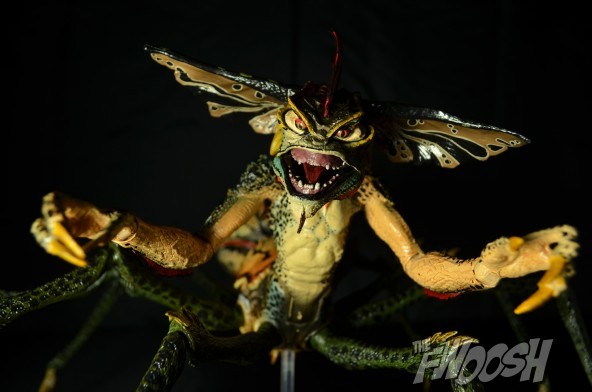