“It’s not exactly a normal world, is it?” –Batman 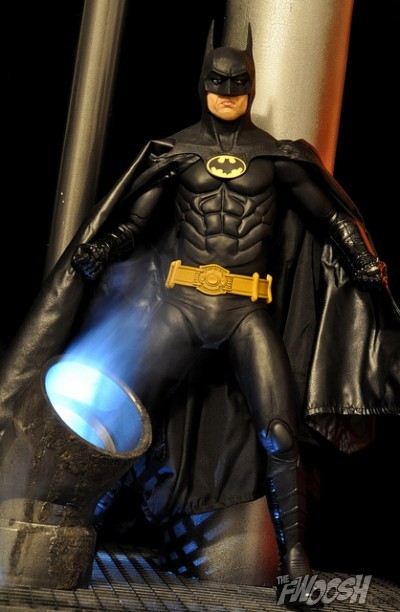 It’s no secret that I love Tim Burton’s Batman movies. They certainly aren’t the greatest films of all time, but they hit that sweet spot in my life when I was just coming into my own as a comic fan and adult collector. When it was announced that Michael Keaton would be donning the cowl, the outrage was palpable. Do you remember the fan reaction to Ben Affleck’s casting as Batman? It was that times about a billion. Keaton nailed it in my eyes, and that’s why, all these years later, I’m as excited as ever to have him in plastic form.

NECA’s quarter-scale Batman from the 1989 film has recently started to hit specialty shops and online retailers. Standing at a full 18 inches and costing around $85, NECA is giving collectors a moderately priced alternative to the Hot Toys version, which will easily cost you $300-$400. 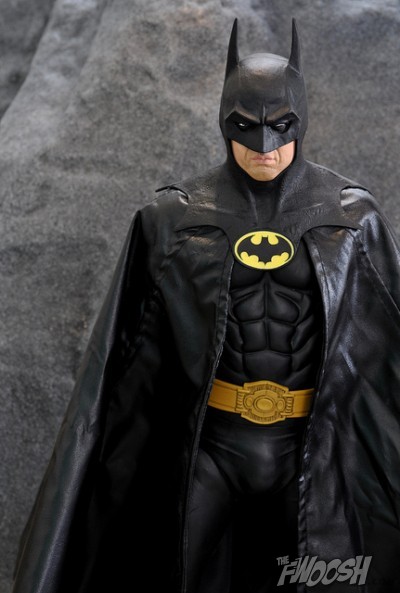 The sculpting on this figure is phenomenal. From the subtle textures and flaws of the cowl to the unique Bat Symbol emblem, NECA has hit a home run. NECA has been on a winning streak with its head sculpts as of late, and their Keaton portrait did not disappoint. However, one issue that we need to address right away is the eyes. My figure (and many, many others from what I’ve seen online) came with what appeared to be a horrible lazy left eye. From collectors much smarter than me, it turns out that the eyes on many figures appear crossed due to the placement of the cowl. Some of the whites of the eye are blocked by shadows or the mask itself. Going above and beyond, NECA actually has a full head sculpt under the cowl, as evidenced by the below photo from their Twitter feed. Using a bit of heat, you can simply readjust his mask to correct the eye problem. After adjusting the mask on mine, it was still slightly crossed, but a huge improvement over how it looked right out of the box. It’s a minor inconvenience, but when fixed, it looks exactly like a guy in a mask — which isn’t always the case when the head sculpt is one piece. 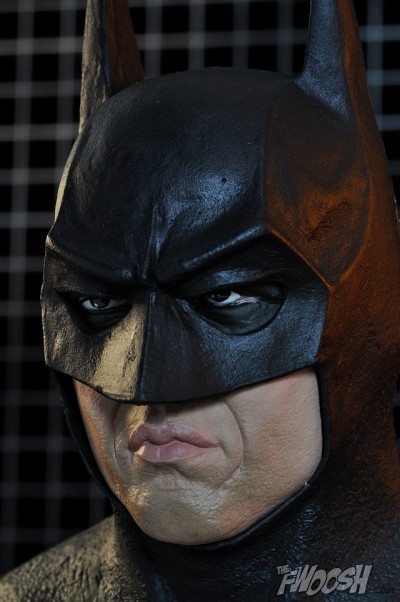 I’ll let the close-up gallery do most of the talking for me, but I would definitely give this a solid A in the sculpt department. My one little nit would be that I would have liked the bottoms of his boots sculpted. It’s the bottom of his feet — who cares, right? Normally I’d agree, but when you have a figure jam-packed with detail such as this, having his boots unfinished seems … well, unfinished. 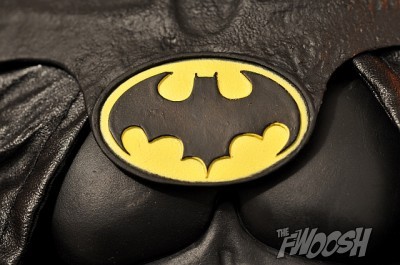 Good paint can make or break a sculpt, and I’m happy to say that this is solid paintwork. The skin tones and eyes (once you have the mask adjusted) are all very realistic and are much better than I was expecting. They even have the dark raccoon paint around the eyes just like in the film. The suit has that dull rubbery look to it and all the cuts around the symbol and utility belt are clean and neat. The accessories and small details of the gloves are truly impressive. This is an expensive toy and it’s this attention to detail that makes you feel like you’re getting your money’s worth. 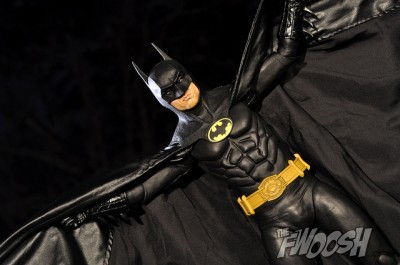 NECA advertised this figure as having 20 points of articulation, but, as is the case with many NECA items, some are so tight that they’re barely functional. Batman has some movement in his head, but just like in the film, head-turning isn’t a strong suit. Below the neck are all the usual suspects. The pros are definitely the pin-and-disk wrists that allow for lots of great poses and the ratcheted ball joints in the hips. This is always appreciated with a figure this heavy. Batman only has single joints in the knees, but it’s not that big of an issue considering the source material. This isn’t your high-flying caped crusader.

My biggest gripe is the fact that it has joints that we can’t use or don’t need. There is some ab movement, but it’s hindered by the muscle-suit overlay. The ankles seem to want tilt and pivot, but the sculpted armor piece makes it function pretty much as a cut joint. They are also just loose enough to make balancing the figure a chore. The waist cut is also so tight that it feels like I’ll break it if move it too far. He gets into all the poses I need him to get into, but it would have been nice not to have to struggle so much. 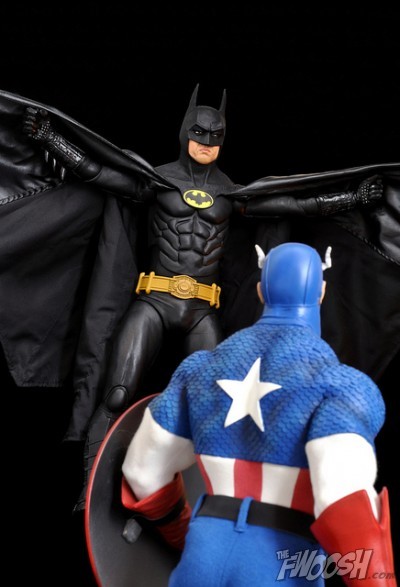 I didn’t pay much (or any) attention to what this figure came with prior to his release. I just knew I needed it. So I was pretty shocked and surprised with the amount of accessories this guy has. Batman comes with his grappling gun (which separates into two pieces), holster, a grappling hook, Batarang (with removable string), three additional hands (one for holding the grappling gun and two for the winged posed), and two long metal batons to assist in the winged pose.

The paints apps and sculpts are top notch and the hands are easily swapped. Take care with the holster as it’s made of thin, hard plastic. I broke mine already. 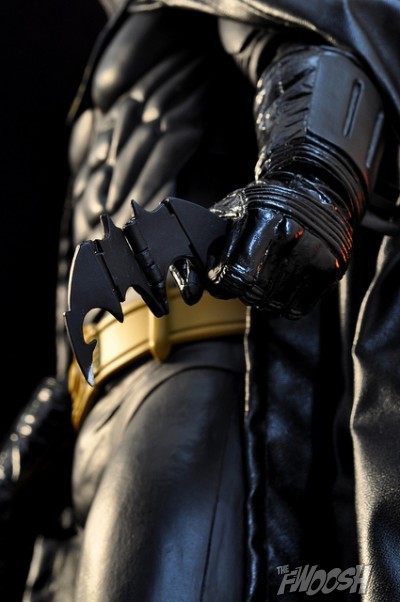 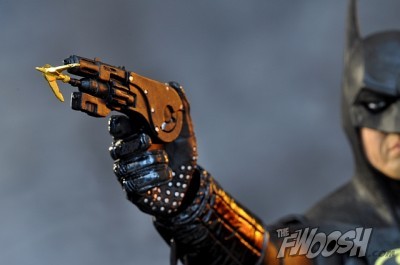 The cape, while not detachable, has a thick faux leather-type material on one side and cloth on the other. You can easily adjust it under his cowl for the over-the-shoulder look should you prefer it. It comes out of the package pretty wrinkled, so a dose of steam should help with that.

Overall, this is a fantastic figure and well worth the price. Its articulation scheme isn’t quite as smooth as on their 7-inch figures, but the sculpt, paint, and sheer size of this guy more than makes up for it. This truly is an affordable centerpiece item for fans of the 1989 Batman. 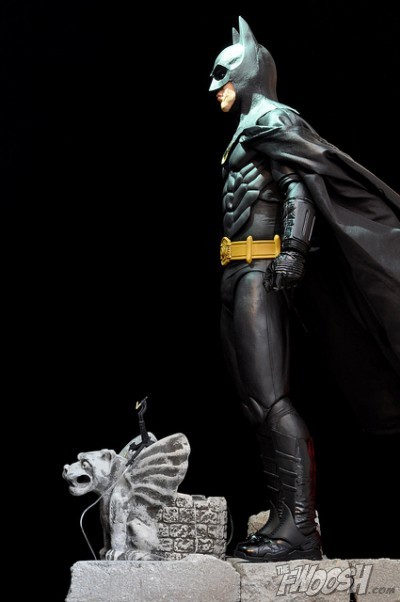 Discuss on our forum