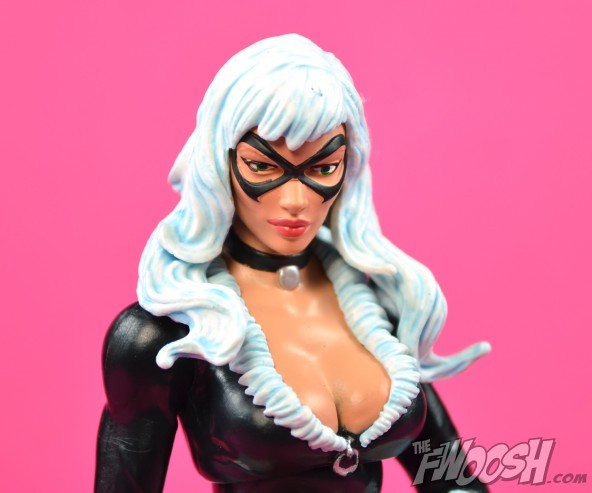 Meow! I almost cannot believe it. One of the biggest wrongs ever inflicted upon the Marvel action figure collector community just got righted – we finally have a GOOD Black Cat figure! It has only been what? About eight years or so in the making? But I am not one to dawdle in the past, and as we will get into it just a moment, this new version of Felicia Hardy will wash away all past sins.

2014 brings a new configuration on the Marvel Legends front in that the line will be used to support the many Marvel movie properties that that will see release in the next 12 months. We are already getting started with Captain America and Spider-Man (of which Black Cat is a part), and I am willing to bet that we will see at least a series supporting the next X-Men flick at Toy Fair next month. Now dubbed the “Infinite Series,” I suppose this will be the moniker of movie-related waves for Legends going forward, and aside from casting brevity to the side, it is a good way of distinguishing movie waves from the standard offerings. Do not worry though, True Believers, as you can see by this figure, the movie lines also include comic-based figures. 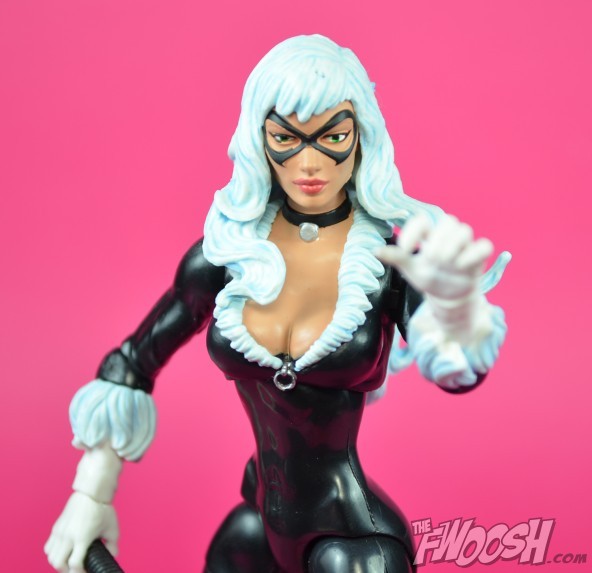 I am particularly thankful for the inclusion of comic figures because I have always been a pick-and-choose collector when it comes to ML, so since I don’t get everything, it is nice when there is a figure that is announced that I am genuinely excited for. So, while I have always thought that the Black Cat is a pretty strong character, making up for that aforementioned ToyBiz bomb is like getting a two-in-one for this release. I don’t think I even own that figure anymore, but you can certainly read about it here, and then jump on back and revel at the good things that 2014 is already bringing us. Sure, this figure is not perfect, but it is not even on the same plane of existence as that last attempt. Yeesh.

Hasbro tends to be all over the map when it comes to era representation of their comic figures. That can be maddening at times as you can have three team members from one era and four more from various other eras, but since Black Cat is more of a lone wolf, er, cat (her Defenders stint notwithstanding), bar any weird short-term look, I was going to be happy with just about any costume they decided to go with, be it classic or modern. They definitely went with a more classic outfit, and the white cuffs and boots look is certainly Felicia’s most long-standing outfit (and probably my personal favorite). Plus, I find it to be the most toyetic of all her looks, and the breaks in all of the patent leather makes for a good contrast. 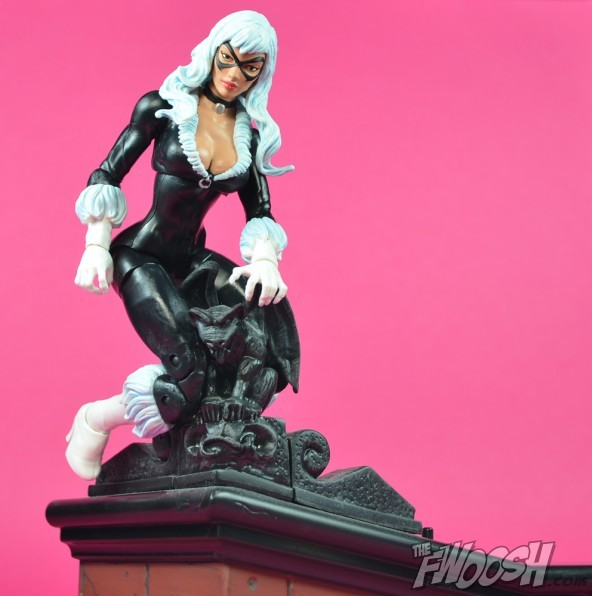 Aesthetically, I would say that Gentle Giant pretty much knockered, sorry, KNOCKED her look out of park. She has the classic feel, but with modern sensibilities, like less of a bouffant to her coiffure. In fact, I think the sculpt of the hair gets extra points because while she does have a lot of platinum strands, they don’t really inhibit the neck articulation too badly, and she retains a good amount of range. Her face sculpt is rather placid, and I would certainly err on that side of fence when it comes action figure head sculpts, but this is one case where I kind of wish she was given a big smile. It fits her personality and she needs to be able to toy with Spider-Man to some degree, but that is just a personal preference. 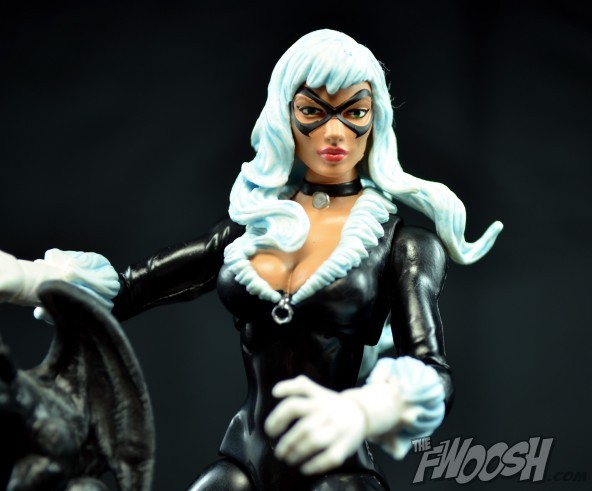 If you have any of the more recent Marvel Legends females, like Moonstone, you will know what you are getting in terms of body type and articulation with Black Cat. I think this is the best female Legends body ever, and it certainly fits with Felicia’s curvaceous requirements. I do think that the “elbros” on this body are particularly useless, so I would love for the arms to get an upgrade. Black Cat needs to be able to put her hands on her hips in convincing fashion and this scheme just doesn’t completely cut it. She does sport new high heels that provide much better stability when standing, and, in what seems to be true Hasbro form of late, they did not shy away from the boobage. I know, these are little plastic toys, but Felicia’s most opined assets were not downgraded in any way for the sake of being a toy, and we already know this body has “dat butt” going for it, so the oft-portrayed shapely Ms. Hardy has been rendered with justice to much of her source material.

If I had to pick a weak spot in the figure, I would call out the paint, but this is Hasbro, so you probably already knew this would be the case. Don’t get me wrong, Black Cat’s paint job is not at all horribly, but with a little more effort, it could have been so much better. She really has minimal paint needs since her costume is really only two colors, but this figure has some sloppy spray in the chestal area and her little cat collar could have used some cleaning up along the silver tag. Her hair and white costume highlights are that light blue that we have come to know, and I actually like them on this figure. I am not really sure how platinum hair can be well represented with paint on plastic, but this is as good as any and it follows the patterning of the comics.

My biggest issue with paint, though, is in the face, and again, that should be the place where the most care is given. This figure has some sloppy and bleeding lines in the mask and eyes, the latter much in the same way Emma Frost suffered as well. Her pupils and irises are bleeding down into her lower eyelid and it is pretty distracting, at least to me. The worst part, though, is the lack of eyebrows, and I did not even know how bad it bothered me until I looked at the close up pictures I took. If you look closely, it appears that Gentle Giant actually SCULPTED the eyebrows just under the top of the mask, but they are left without paint. Arg. I mean, really arg. When a figure is mediocre overall, the paint can be an afterthought, but Black Cat is so strong on many other levels, so it just pains me that she falls short with the paint. Hasbro, please – get your paint, especially on the faces, locked down. You are making some beautiful figures that are being held back by this one thing. Don’t settle for a seven or an eight when you can easily have a ten. Please. 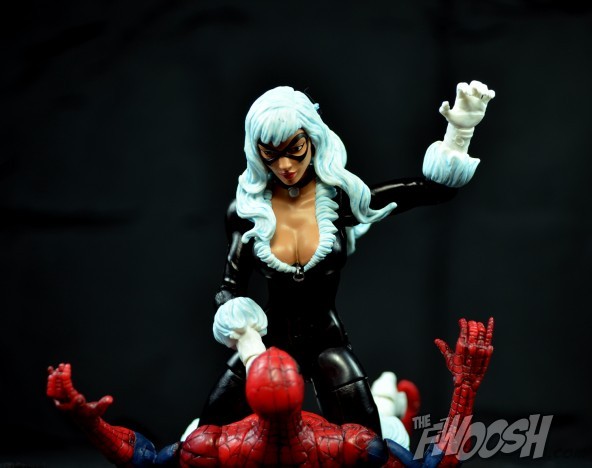 Okay, paint aside, I really, really dig this figure. It is a great ICONIC representation of a fun character and it makes up for the only other six-inch scale Black Cat that we have been suffering with for all of these years. Now, in true mass-market form, she is packaged one-to-a-case, and she will be swapped out for a modern Spider-Woman figure halfway through the run. That figure is already creeping out of Asia, so if you want Black Cat, I would suggest you do not wait. Amazon doesn’t have these yet, but eBay and Dorkside toys do, so you might want snap her up ASAP. At any rate, if you want to build that Ultimate Green Goblin figure, she is essential for the chest piece. The chest piece … I don’t call that a coincidence. Anyhow, some paint issues aside, this is a great figure and I think she will make a lot of collectors happy. 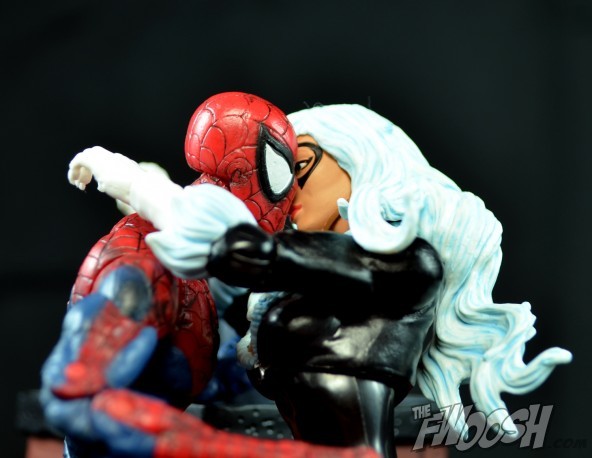