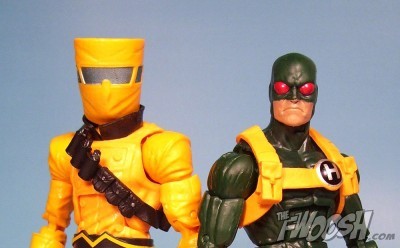 Finally, army builders we can all get behind! Remember way back when we saw the mostly statues of grunts and henchmen? This is what we were seeing in our heads. And now it’s what we’re holding in our hands. These have been a long time coming and they definitely do not disappoint. I’m glad to see Hasbro taking some risks with something like this. I want to make some kind of Sandtrooper comparison, but, really, when it comes to mass-market action figures, Star Wars and Marvel are two completely different ballgames, so I won’t go there. But it really is the season of the army builder!

I’m going to start with the Hydra Soldier. Or Bob if you’re nasty.

Like I said with Zemo, if you have Bucky Cap or Black Panther, you already know what this body can do, and it works perfectly for the Hydra grunt. The body size and build is one that we’re familiar with from the comics, so no one is going to look twice when they see 10 standing together. The shoulder ball detentes are a little tighter than we’ve seen, and the hips a little looser at the crotch, but neither really affects his poseability.

Not a lot of paint applications here; the majority is cast in the appropriate color. The only place that I could see causing any distress is the usual forearm-to-glove transition — the yellow over green plastic — and even it looks great, definitely better than Zemo. The worst offender is the flesh of the cheek that wasn’t painted all the way up to the bottom of the mask, but I just had to look closer to find that.

The biggest downfall for me is the weapons. While I love how Hasbro incorporated the Hydra symbol into the shorter rifle, the design of both guns is ugly. They seem awkward and cumbersome. The shorter one has a handle that looks like a pistol and then a much bigger gun was haphazardly stuck on top of it with not a lot of meat in between. It makes it easy to twist. The longer rifle is too long and seriously looks like a fishing lure. I was amused by pictures, but having it in hand and not being able to do much with it is a bit disappointing. I have bins full of unused weapons so it’s not a big deal, and if the weapons are the biggest gripe I can find, then we’re doing pretty good.

And then there’s my favorite of this wave: the A.I.M. Soldier.

Hot dog, I don’t know what it is about this guy that tickles my fancy until my fancy pees it’s pants, but he does it. Completely new sculpt, awesome articulation, fantastic presence on the shelf. All that on top of the fact that we’ve never had a beekeeper figure, and it’s easy to see why he’s a favorite.

Whereas the weapons were Bob’s downfall, the A.I.M. dude’s guns totally work. They look and feel hefty, solid, and the colors work together a lot better. Most of all, they don’t look awkward when being held. The A.I.M. logo being integrated into the stock of the rifle is brilliant too. I wouldn’t have minded if these same guns had come with the Hydra soldier but in green and yellow. Unfortunately, we’re getting the fishing lure gun in red with the movie Winter Soldier. Not a good choice. This rifle would have been much better.

I really can’t think of anything that even bugs me about this figure. We already know the Guardians of the Galaxy movie Star-Lord is coming on this body, but I also want to see a new Ghost Rider. Do yourself a favor and don’t pass this one up. If you don’t like it, I’ll personally buy it from you. 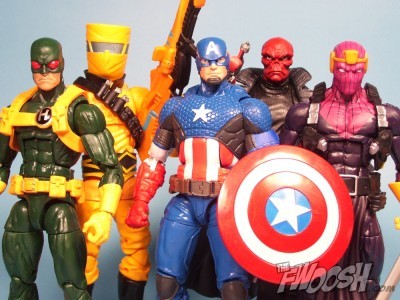 All in all, Captain America Legends Infinite is a hit, one of the best waves to come out in a long time. A nice surprise of fan-requested figures and a couple we didn’t even know we needed. Between this and Spider-Man Legends, Infinite 2014 is off to great start for Marvel collectors!